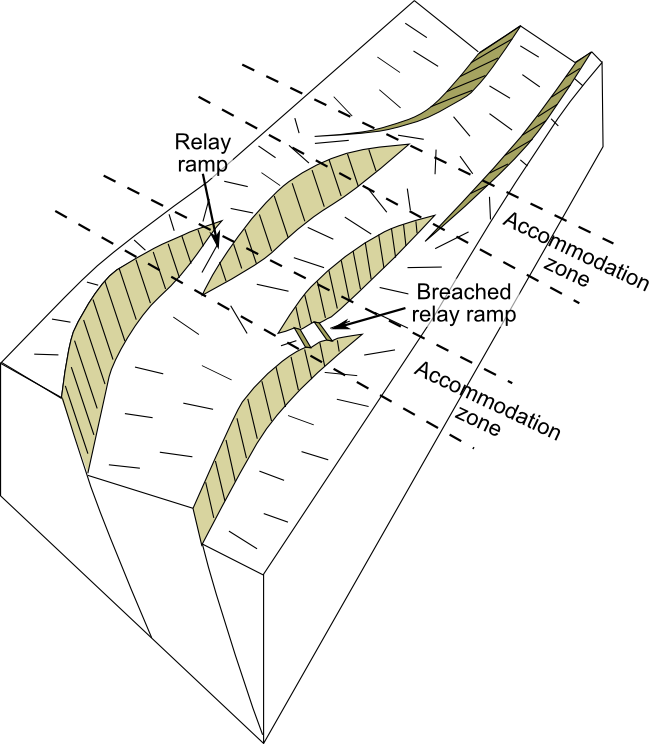 left|Topographic profile of the Malawi Lake Most rifts consist of a series of separate segments that together form the linear zone characteristic of rifts. The individual rift segments have a dominantly half-graben geometry, controlled by a single basin-bounding fault. Segment lengths vary between rifts, depending on the elastic thickness of the lithosphere. Areas of thick colder lithosphere, such as the Baikal Rift have segment lengths in excess of 80 km, while in areas of warmer thin lithosphere, segment lengths may be less than 30 km. Along the axis of the rift the position, and in some cases the polarity (the dip direction), of the main rift bounding fault changes from segment to segment. Segment boundaries often have a more complex structure and generally cross the rift axis at a high angle. These segment boundary zones accommodate the differences in fault displacement between the segments and are therefore known as accommodation zones. Accommodation zones take various forms, from a simple relay ramp at the overlap between two major faults of the same polarity, to zones of high structural complexity, particularly where the segments have opposite polarity. Accommodation zones may be located where older crustal structures intersect the rift axis. In the Gulf of Suez rift, the Zaafarana accommodation zone is located where a shear zone in the Arabian-Nubian Shield meets the rift. Rift flanks or shoulders are elevated areas around rifts. Rift shoulders are typically about 70 km wide.