In mathematics, the real projective plane is an example of a compact non-orientable two-dimensional manifold; in other words, a one-sided surface. It cannot be embedded in standard three-dimensional space without intersecting itself. It has basic applications to geometry, since the common construction of the real projective plane is as the space of lines in R3 passing through the origin. The plane is also often described topologically, in terms of a construction based on the Möbius strip: if one could glue the (single) edge of the Möbius strip to itself in the correct direction, one would obtain the projective plane. (This cannot be done in three-dimensional space without the surface intersecting itself.) Equivalently, gluing a disk along the boundary of the Möbius strip gives the projective plane. Topologically, it has Euler characteristic 1, hence a demigenus (non-orientable genus, Euler genus) of 1. Since the Möbius strip, in turn, can be constructed from a square by gluing two of its sides together, the real projective plane can thus be represented as a unit square (that is, , 1× ,1) with its sides identified by the following equivalence relations: :(0, ''y'') ~ (1, 1 − ''y'')   for 0 ≤ ''y'' ≤ 1 and :(''x'', 0) ~ (1 − ''x'', 1)   for 0 ≤ ''x'' ≤ 1, as in the leftmost diagram shown here.

Because the sphere covers the real projective plane twice, the plane may be represented as a closed hemisphere around whose rim opposite points are similarly identified.

The projective plane can be immersed (local neighbourhoods of the source space do not have self-intersections) in 3-space. Boy's surface is an example of an immersion. Polyhedral examples must have at least nine faces.

Steiner's Roman surface is a more degenerate map of the projective plane into 3-space, containing a cross-cap. 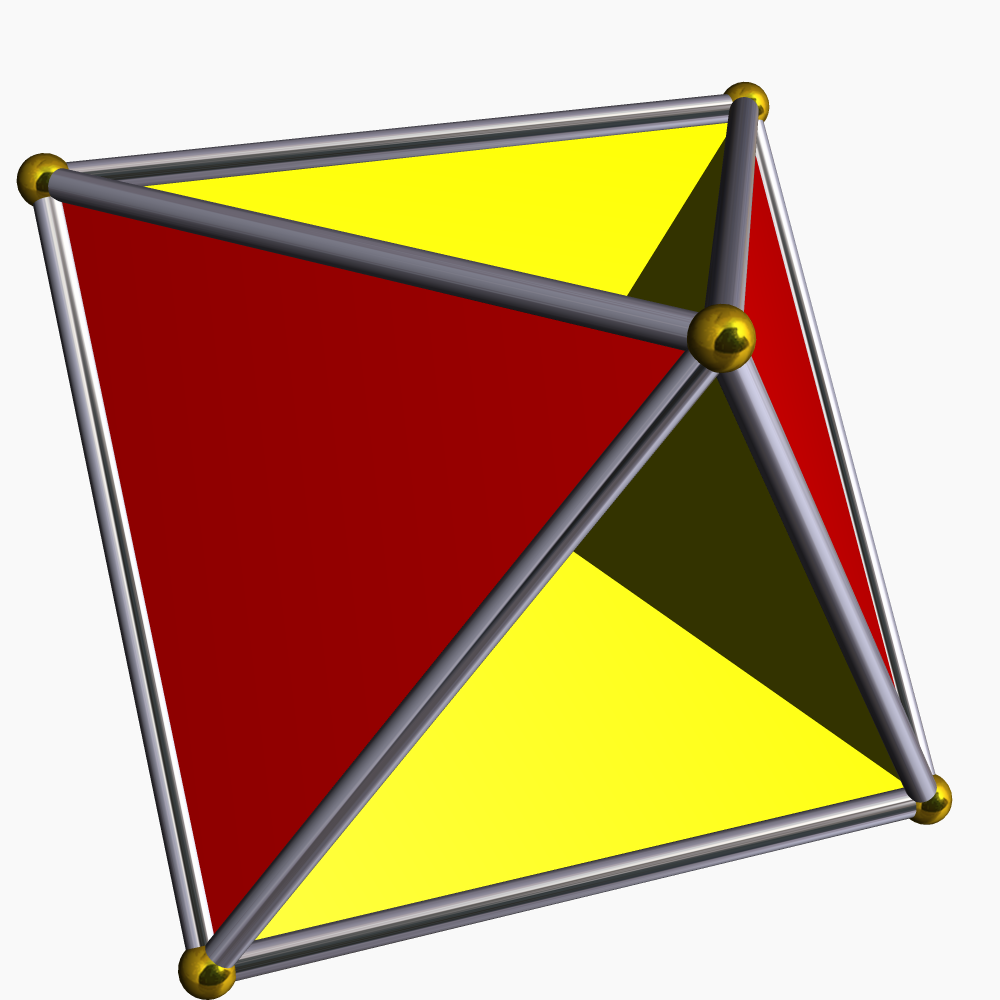 A polyhedral representation is the tetrahemihexahedron, which has the same general form as Steiner's Roman Surface, shown here.

Looking in the opposite direction, certain abstract regular polytopes – hemi-cube, hemi-dodecahedron, and hemi-icosahedron – can be constructed as regular figures in the ''projective plane;'' see also projective polyhedra.

In P2 the equation of a line is and this equation can represent a line on any plane parallel to the ''x'', ''y'' plane by multiplying the equation by ''k''. If we have a normalized homogeneous coordinate. All points that have ''z'' = 1 create a plane. Let's pretend we are looking at that plane (from a position further out along the ''z'' axis and looking back towards the origin) and there are two parallel lines drawn on the plane. From where we are standing (given our visual capabilities) we can see only so much of the plane, which we represent as the area outlined in red in the diagram. If we walk away from the plane along the ''z'' axis, (still looking backwards towards the origin), we can see more of the plane. In our field of view original points have moved. We can reflect this movement by dividing the homogeneous coordinate by a constant. In the adjacent image we have divided by 2 so the ''z'' value now becomes 0.5. If we walk far enough away what we are looking at becomes a point in the distance. As we walk away we see more and more of the parallel lines. The lines will meet at a line at infinity (a line that goes through zero on the plane at ). Lines on the plane when are ideal points. The plane at is the line at infinity. The homogeneous point is where all the real points go when you're looking at the plane from an infinite distance, a line on the plane is where parallel lines intersect.

The equation calculates the inner product of two column vectors. The inner product of two vectors is zero if the vectors are orthogonal. In P2, the line between the points x1 and x2 may be represented as a column vector ℓ that satisfies the equations and , or in other words a column vector ℓ that is orthogonal to x1 and x2. The cross product will find such a vector: the line joining two points has homogeneous coordinates given by the equation . The intersection of two lines may be found in the same way, using duality, as the cross product of the vectors representing the lines, .

The projective plane embeds into 4-dimensional Euclidean space. The real projective plane P2(R) is the quotient of the two-sphere :S2 = by the antipodal relation . Consider the function given by . This map restricts to a map whose domain is S2 and, since each component is a homogeneous polynomial of even degree, it takes the same values in R4 on each of any two antipodal points on S2. This yields a map . Moreover, this map is an embedding. Notice that this embedding admits a projection into R3 which is the Roman surface.

By gluing together projective planes successively we get non-orientable surfaces of higher demigenus. The gluing process consists of cutting out a little disk from each surface and identifying (''gluing'') their boundary circles. Gluing two projective planes creates the Klein bottle. The article on the fundamental polygon describes the higher non-orientable surfaces.