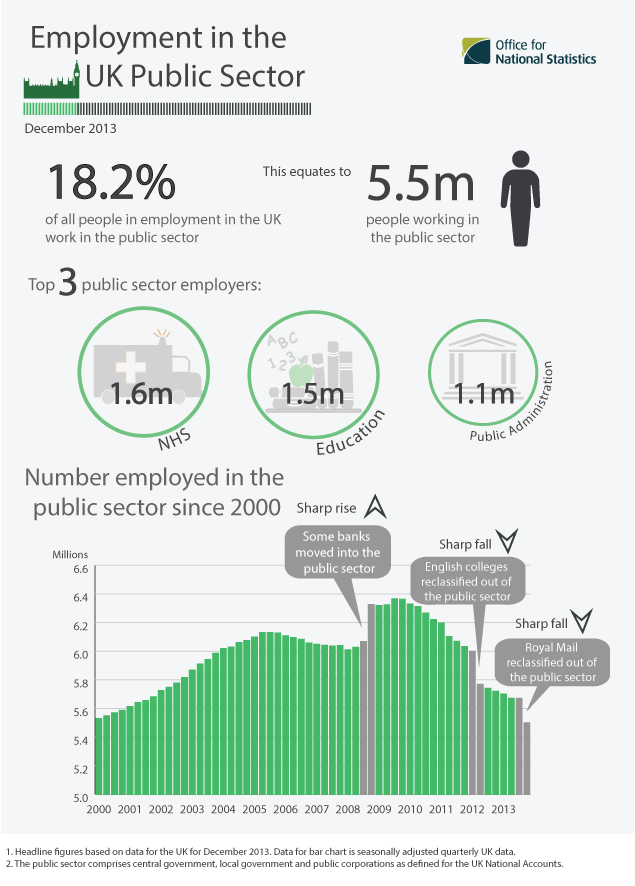 The public sector (also called the state sector) is the part of the economy composed of both public services and public enterprises. Public sectors include public goods and governmental services such as the military, law enforcement, infrastructure (public roads, bridges, tunnels, water supply, sewers, electrical grids, telecommunications, etc.), public transit, public education, along with health care and those working for the government itself, such as elected officials. The public sector might provide services that a non-payer cannot be excluded from (such as street lighting), services which benefit all of society rather than just the individual who uses the service. Public enterprises, or state-owned enterprises, are self-financing commercial enterprises that are under public ownership which provide various private goods and services for sale and usually operate on a commercial basis. Organizations that are not part of the public sector are either a part of the private sector or voluntary sector. The private sector is composed of the economic sectors that are intended to earn a profit for the owners of the enterprise. The voluntary, civic or social sector concerns a diverse array of non-profit organizations emphasizing civil society.

The organization of the public sector can take several forms, including: * Direct administration funded through taxation; the delivering organization generally has no specific requirement to meet commercial success criteria, and production decisions are determined by government. * State-owned enterprises; which differ from direct administration in that they have greater management autonomy and operate according to commercial criteria, and production decisions are not generally taken by a government (although goals may be set for them by the government). * Levels of Public sector are organized at three levels: Federal or National, Regional (State or Provincial), and Local (Municipal or County). * Partial outsourcing (of the scale many businesses do, e.g. for IT services) is considered a public sector model. A borderline form is as follows: * Complete outsourcing or contracting out, with a privately owned corporation delivering the entire service on behalf of the government. This may be considered a mixture of private sector operations with public ownership of assets, although in some forms the private sector's control and/or risk is so great that the service may no longer be considered part of the public sector (Barlow et al., 2010). (See the United Kingdom's Private Finance Initiative.) *Public employee unions represent workers. Since contract negotiations for these workers are dependent on the size of government budgets, this is the one segment of the labor movement that can actually contribute directly to the people with ultimate responsibility for its livelihood. While their giving pattern matches that of other unions, public sector unions also concentrate contributions on members of Congress from both parties who sit on committees that deal with federal budgets and agencies.

Libertarian and Austrian economists have criticized the idea of public sector provision of goods and services as inherently inefficient. Libertarians and anarcho-capitalists have also argued that the system by which the public sector is funded, namely taxation, is itself coercive and unjust. However, even notable small-government proponents have pushed back on this point of view, citing the ultimate necessity of a public sector for provision of certain services, such as national defense, public works and utilities, and pollution controls.