Pressure (symbol: ''p'' or ''P'') is the force applied perpendicular to the surface of an object per unit area over which that force is distributed. Gauge pressure (also spelled ''gage'' pressure) is the pressure relative to the ambient pressure. Various units are used to express pressure. Some of these derive from a unit of force divided by a unit of area; the SI unit of pressure, the pascal (Pa), for example, is one newton per square metre (N/m2); similarly, the pound-force per square inch (psi) is the traditional unit of pressure in the imperial and U.S. customary systems. Pressure may also be expressed in terms of standard atmospheric pressure; the atmosphere (atm) is equal to this pressure, and the torr is defined as of this. Manometric units such as the centimetre of water, millimetre of mercury, and inch of mercury are used to express pressures in terms of the height of column of a particular fluid in a manometer.

Pressure is the amount of force applied at right angles to the surface of an object per unit area. The symbol for it is "p" or ''P''. The IUPAC recommendation for pressure is a lower-case ''p''. However, upper-case ''P'' is widely used. The usage of ''P'' vs ''p'' depends upon the field in which one is working, on the nearby presence of other symbols for quantities such as power and momentum, and on writing style.

Mathematically: : where: : is the pressure, : is the magnitude of the normal force, : is the area of the surface on contact. Pressure is a scalar quantity. It relates the vector area element (a vector normal to the surface) with the normal force acting on it. The pressure is the scalar proportionality constant that relates the two normal vectors: : The minus sign comes from the fact that the force is considered towards the surface element, while the normal vector points outward. The equation has meaning in that, for any surface ''S'' in contact with the fluid, the total force exerted by the fluid on that surface is the surface integral over ''S'' of the right-hand side of the above equation. It is incorrect (although rather usual) to say "the pressure is directed in such or such direction". The pressure, as a scalar, has no direction. The force given by the previous relationship to the quantity has a direction, but the pressure does not. If we change the orientation of the surface element, the direction of the normal force changes accordingly, but the pressure remains the same. Pressure is distributed to solid boundaries or across arbitrary sections of fluid ''normal to'' these boundaries or sections at every point. It is a fundamental parameter in thermodynamics, and it is conjugate to volume. 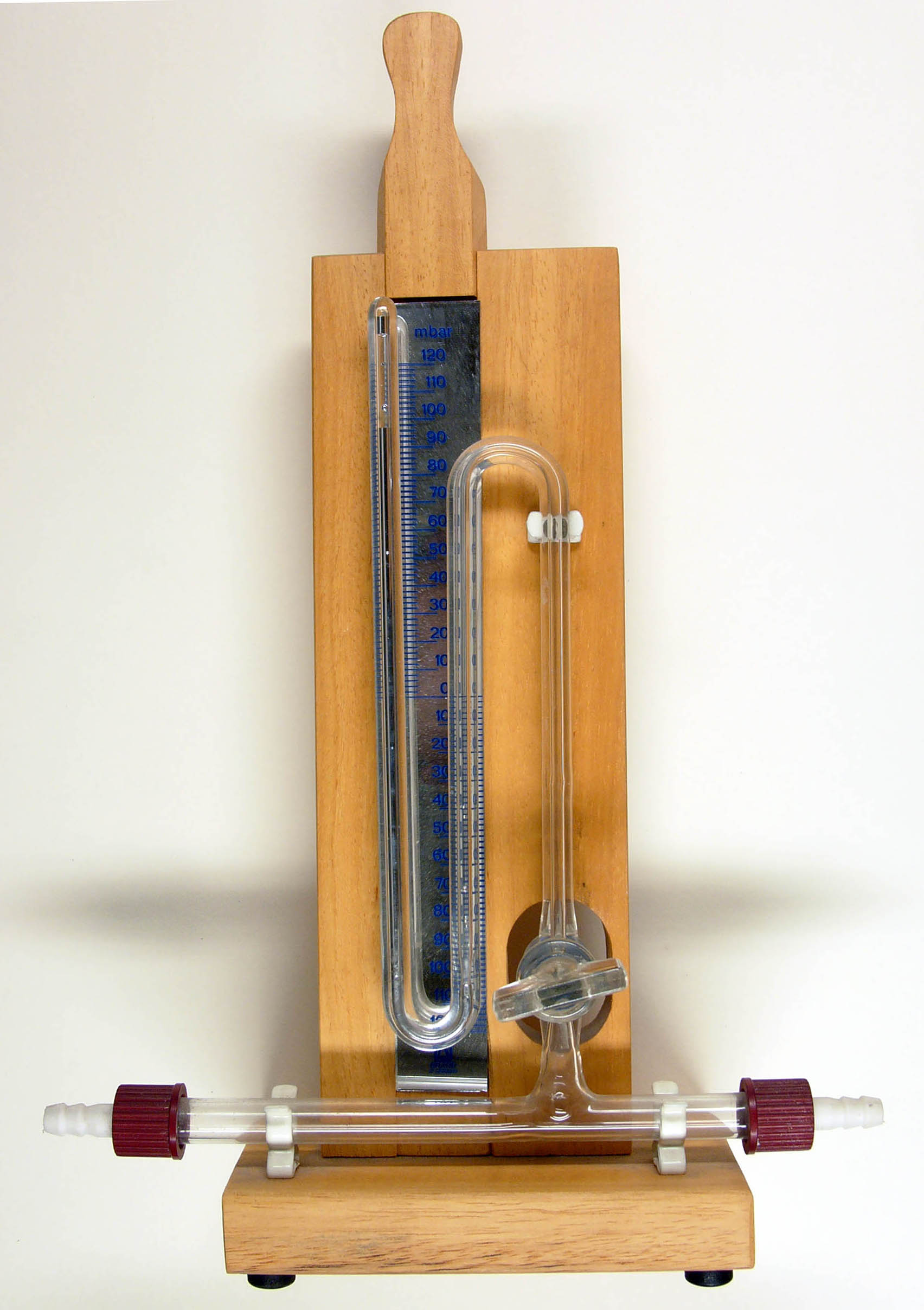 The SI unit for pressure is the pascal (Pa), equal to one newton per square metre (N/m2, or kg·m−1·s−2). This name for the unit was added in 1971; before that, pressure in SI was expressed simply in newtons per square metre. Other units of pressure, such as pounds per square inch (Ibf/in2) and bar, are also in common use. The CGS unit of pressure is the barye (Ba), equal to 1 dyn·cm−2, or 0.1 Pa. Pressure is sometimes expressed in grams-force or kilograms-force per square centimetre (g/cm2 or kg/cm2) and the like without properly identifying the force units. But using the names kilogram, gram, kilogram-force, or gram-force (or their symbols) as units of force is expressly forbidden in SI. The technical atmosphere (symbol: at) is 1 kgf/cm2 (98.0665 kPa, or 14.223 psi). Since a system under pressure has the potential to perform work on its surroundings, pressure is a measure of potential energy stored per unit volume. It is therefore related to energy density and may be expressed in units such as joules per cubic metre (J/m3, which is equal to Pa). Mathematically: : Some meteorologists prefer the hectopascal (hPa) for atmospheric air pressure, which is equivalent to the older unit millibar (mbar). Similar pressures are given in kilopascals (kPa) in most other fields, where the hecto- prefix is rarely used. The inch of mercury is still used in the United States. Oceanographers usually measure underwater pressure in decibars (dbar) because pressure in the ocean increases by approximately one decibar per metre depth. The standard atmosphere (atm) is an established constant. It is approximately equal to typical air pressure at Earth mean sea level and is defined as . Because pressure is commonly measured by its ability to displace a column of liquid in a manometer, pressures are often expressed as a depth of a particular fluid (e.g., centimetres of water, millimetres of mercury or inches of mercury). The most common choices are mercury (Hg) and water; water is nontoxic and readily available, while mercury's high density allows a shorter column (and so a smaller manometer) to be used to measure a given pressure. The pressure exerted by a column of liquid of height ''h'' and density ''ρ'' is given by the hydrostatic pressure equation , where ''g'' is the gravitational acceleration. Fluid density and local gravity can vary from one reading to another depending on local factors, so the height of a fluid column does not define pressure precisely. When millimetres of mercury or inches of mercury are quoted today, these units are not based on a physical column of mercury; rather, they have been given precise definitions that can be expressed in terms of SI units. One millimetre of mercury is approximately equal to one torr. The water-based units still depend on the density of water, a measured, rather than defined, quantity. These ''manometric units'' are still encountered in many fields. Blood pressure is measured in millimetres of mercury in most of the world, and lung pressures in centimetres of water are still common. Underwater divers use the metre sea water (msw or MSW) and foot sea water (fsw or FSW) units of pressure, and these are the standard units for pressure gauges used to measure pressure exposure in diving chambers and personal decompression computers. A msw is defined as 0.1 bar (= 100000 Pa = 10000 Pa), is not the same as a linear metre of depth. 33.066 fsw = 1 atm