Potassium is a chemical element with the symbol K (from Neo-Latin ''kalium'') and atomic number19. Potassium is a silvery-white metal that is soft enough to be cut with a knife with little force. Potassium metal reacts rapidly with atmospheric oxygen to form flaky white potassium peroxide in only seconds of exposure. It was first isolated from potash, the ashes of plants, from which its name derives. In the periodic table, potassium is one of the alkali metals, all of which have a single valence electron in the outer electron shell, that is easily removed to create an ion with a positive charge – a cation, that combines with anions to form salts. Potassium in nature occurs only in ionic salts. Elemental potassium reacts vigorously with water, generating sufficient heat to ignite hydrogen emitted in the reaction, and burning with a lilac-colored flame. It is found dissolved in sea water (which is 0.04% potassium by weight), and occurs in many minerals such as orthoclase, a common constituent of granites and other igneous rocks. Potassium is chemically very similar to sodium, the previous element in group 1 of the periodic table. They have a similar first ionization energy, which allows for each atom to give up its sole outer electron. It was suspected in 1702 that they were distinct elements that combine with the same anions to make similar salts, and was proven in 1807 using electrolysis. Naturally occurring potassium is composed of three isotopes, of which is radioactive. Traces of are found in all potassium, and it is the most common radioisotope in the human body. Potassium ions are vital for the functioning of all living cells. The transfer of potassium ions across nerve cell membranes is necessary for normal nerve transmission; potassium deficiency and excess can each result in numerous signs and symptoms, including an abnormal heart rhythm and various electrocardiographic abnormalities. Fresh fruits and vegetables are good dietary sources of potassium. The body responds to the influx of dietary potassium, which raises serum potassium levels, with a shift of potassium from outside to inside cells and an increase in potassium excretion by the kidneys. Most industrial applications of potassium exploit the high solubility in water of potassium compounds, such as potassium soaps. Heavy crop production rapidly depletes the soil of potassium, and this can be remedied with agricultural fertilizers containing potassium, accounting for 95% of global potassium chemical production.

The English name for the element ''potassium'' comes from the word "potash", which refers to an early method of extracting various potassium salts: placing in a ''pot'' the ''ash'' of burnt wood or tree leaves, adding water, heating, and evaporating the solution. When Humphry Davy first isolated the pure element using electrolysis in 1807, he named it ''potassium'', which he derived from the word potash. The symbol "K" stems from ''kali'', itself from the root word ''alkali'', which in turn comes from ar|القَلْيَه ''al-qalyah'' "plant ashes". In 1797, the German chemist Martin Klaproth discovered "potash" in the minerals leucite and lepidolite, and realized that "potash" was not a product of plant growth but actually contained a new element, which he proposed to call ''kali''. In 1807, Humphry Davy produced the element via electrolysis: in 1809, Ludwig Wilhelm Gilbert proposed the name ''Kalium'' for Davy's "potassium". In 1814, the Swedish chemist Berzelius advocated the name ''kalium'' for potassium, with the chemical symbol "K". The English and French speaking countries adopted Davy and Gay-Lussac/Thénard's name Potassium, while the Germanic countries adopted Gilbert/Klaproth's name Kalium. The "Gold Book" of the International Union of Pure and Applied Chemistry has designated the official chemical symbol as K.

Potassium is the second least dense metal after lithium. It is a soft solid with a low melting point, and can be easily cut with a knife. Freshly cut potassium is silvery in appearance, but it begins to tarnish toward gray immediately on exposure to air. In a flame test, potassium and its compounds emit a lilac color with a peak emission wavelength of 766.5 nanometers. Neutral potassium atoms have 19 electrons, one more than the configuration of the noble gas argon. Because of its low first ionization energy of 418.8kJ/mol, the potassium atom is much more likely to lose the last electron and acquire a positive charge, although negatively charged alkalide ions are not impossible. In contrast, the second ionization energy is very high (3052kJ/mol).

Potassium reacts with oxygen, water, and carbon dioxide components in air. With oxygen it forms potassium peroxide. With water potassium forms potassium hydroxide. The reaction of potassium with water can be violently exothermic, especially since the coproduced hydrogen gas can ignite. Because of this, potassium and the liquid sodium-potassium (NaK) alloy are potent desiccants, although they are no longer used as such.

left|upStructure of solid potassium superoxide (). Three oxides of potassium are well studied: potassium oxide (K2O), potassium peroxide (K2O2), and potassium superoxide (KO2). The binary potassium-oxygen binary compounds react with water forming potassium hydroxide. Potassium hydroxide (KOH) is a strong base. Illustrating its hydrophilic character, as much as 1.21kg of KOH can dissolve in a single liter of water. Anhydrous KOH is rarely encountered. KOH reacts readily with carbon dioxide to produce potassium carbonate and in principle could be used to remove traces of the gas from air. Like the closely related sodium hydroxide, potassium hydroxide reacts with fats to produce soaps. In general, potassium compounds are ionic and, owing to the high hydration energy of the ion, have excellent water solubility. The main species in water solution are the aquated complexes where n = 6 and 7. Potassium heptafluorotantalate is an intermediate in the purification of tantalum from the otherwise persistent contaminant of niobium. Organopotassium compounds illustrate nonionic compounds of potassium. They feature highly polar covalent K---C bonds. Examples include benzyl potassium. Potassium intercalates into graphite to give a variety of compounds, including KC8.

There are 25 known isotopes of potassium, three of which occur naturally: (93.3%), (0.0117%), and (6.7%). Naturally occurring has a half-life of 1.250×109 years. It decays to stable by electron capture or positron emission (11.2%) or to stable by beta decay (88.8%). The decay of to is the basis of a common method for dating rocks. The conventional K-Ar dating method depends on the assumption that the rocks contained no argon at the time of formation and that all the subsequent radiogenic argon () was quantitatively retained. Minerals are dated by measurement of the concentration of potassium and the amount of radiogenic that has accumulated. The minerals best suited for dating include biotite, muscovite, metamorphic hornblende, and volcanic feldspar; whole rock samples from volcanic flows and shallow instrusives can also be dated if they are unaltered. Apart from dating, potassium isotopes have been used as tracers in studies of weathering and for nutrient cycling studies because potassium is a macronutrient required for life. occurs in natural potassium (and thus in some commercial salt substitutes) in sufficient quantity that large bags of those substitutes can be used as a radioactive source for classroom demonstrations. is the radioisotope with the largest abundance in the body. In healthy animals and people, represents the largest source of radioactivity, greater even than . In a human body of 70kg mass, about 4,400 nuclei of decay per second. The activity of natural potassium is 31 Bq/g. 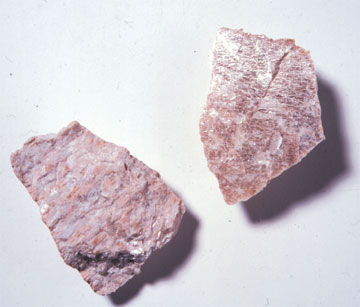 Potash is primarily a mixture of potassium salts because plants have little or no sodium content, and the rest of a plant's major mineral content consists of calcium salts of relatively low solubility in water. While potash has been used since ancient times, its composition was not understood. Georg Ernst Stahl obtained experimental evidence that led him to suggest the fundamental difference of sodium and potassium salts in 1702, and Henri Louis Duhamel du Monceau was able to prove this difference in 1736. The exact chemical composition of potassium and sodium compounds, and the status as chemical element of potassium and sodium, was not known then, and thus Antoine Lavoisier did not include the alkali in his list of chemical elements in 1789. For a long time the only significant applications for potash were the production of glass, bleach, soap and gunpowder as potassium nitrate. Potassium soaps from animal fats and vegetable oils were especially prized because they tend to be more water-soluble and of softer texture, and are therefore known as soft soaps.