Euclid set forth the first great landmark of mathematical thought, an axiomatic treatment of geometry. He selected a small core of undefined terms (called ''common notions'') and postulates (or axioms) which he then used to prove various geometrical statements. Although the plane in its modern sense is not directly given a definition anywhere in the ''Elements'', it may be thought of as part of the common notions. Euclid never used numbers to measure length, angle, or area. In this way the Euclidean plane is not quite the same as the Cartesian plane.

A plane is a ruled surface

This section is solely concerned with planes embedded in three dimensions: specifically, in R3.

Determination by contained points and lines

In a Euclidean space of any number of dimensions, a plane is uniquely determined by any of the following: * Three non-collinear points (points not on a single line). * A line and a point not on that line. * Two distinct but intersecting lines. * Two distinct but parallel lines.

In a manner analogous to the way lines in a two-dimensional space are described using a point-slope form for their equations, planes in a three dimensional space have a natural description using a point in the plane and a vector orthogonal to it (the normal vector) to indicate its "inclination". Specifically, let be the position vector of some point , and let be a nonzero vector. The plane determined by the point and the vector consists of those points , with position vector , such that the vector drawn from to is perpendicular to . Recalling that two vectors are perpendicular if and only if their dot product is zero, it follows that the desired plane can be described as the set of all points such that : The dot here means a dot (scalar) product.
Expanded this becomes : which is the ''point–normal'' form of the equation of a plane. This is just a linear equation : where :, which is the expanded form of In mathematics it is a common convention to express the normal as a unit vector, but the above argument holds for a normal vector of any non-zero length. Conversely, it is easily shown that if and are constants and , and are not all zero, then the graph of the equation :: is a plane having the vector as a normal. This familiar equation for a plane is called the ''general form'' of the equation of the plane. Thus for example a regression equation of the form (with ) establishes a best-fit plane in three-dimensional space when there are two explanatory variables.

Alternatively, a plane may be described parametrically as the set of all points of the form : 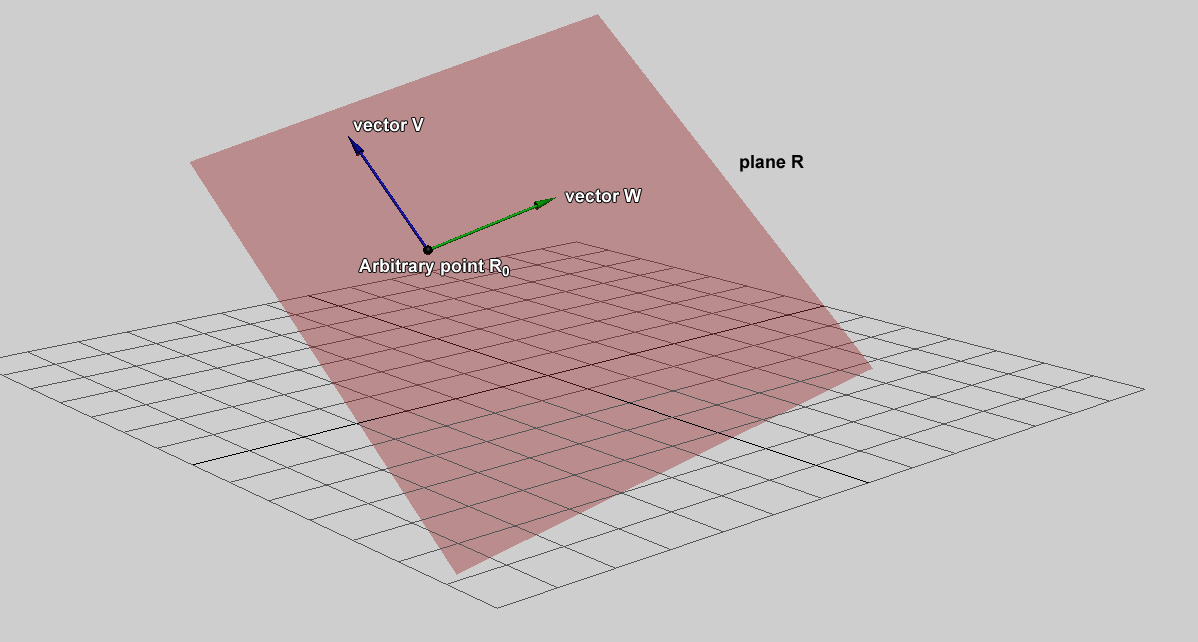 Describing a plane through three points

Let , , and be non-collinear points.

The plane passing through , , and can be described as the set of all points (x,y,z) that satisfy the following determinant equations: :

To describe the plane by an equation of the form , solve the following system of equations: : : : This system can be solved using Cramer's rule and basic matrix manipulations. Let : . If ''D'' is non-zero (so for planes not through the origin) the values for ''a'', ''b'' and ''c'' can be calculated as follows: : : : These equations are parametric in ''d''. Setting ''d'' equal to any non-zero number and substituting it into these equations will yield one solution set.

This plane can also be described by the "point and a normal vector" prescription above. A suitable normal vector is given by the cross product : and the point can be taken to be any of the given points , or (or any other point in the plane).

Distance from a point to a plane

For a plane and a point not necessarily lying on the plane, the shortest distance from to the plane is : It follows that lies in the plane if and only if ''D=0''. If meaning that ''a'', ''b'', and ''c'' are normalized then the equation becomes : Another vector form for the equation of a plane, known as the Hesse normal form relies on the parameter ''D''. This form is: