In everyday speech, a phrase is any group of words, often carrying a special idiomatic meaning; in this sense it is synonymous with expression. In linguistic analysis, a phrase is a group of words (or possibly a single word) that functions as a constituent in the
syntax In linguistics, syntax () is the set of rules, principles, and processes that govern the structure of Sentence (linguistics), sentences (sentence structure) in a given Natural language, language, usually including word order. The term ''syntax'' ...
of a sentence, a single unit within a grammatical hierarchy. A phrase typically appears within a
clause In language, a clause is a part of the sentence that constitutes or comprises a predicate (grammar), predicate. A typical clause consists of a subject (grammar), subject and a predicate, the latter typically a verb phrase, a verb with any object ...
, but it is possible also for a phrase to be a clause or to contain a clause within it. There are also types of phrases like noun phrase and prepositional phrase.

Common and technical use

There is a difference between the common use of the term ''phrase'' and its technical use in linguistics. In common usage, a phrase is usually a group of words with some special
idiom An idiom is a phrase or expression that typically presents a figurative language, figurative, non-literal meaning (linguistic), meaning attached to the phrase; but some phrases become figurative idioms while retaining the literal meaning of the ph ...
atic meaning or other significance, such as "
all rights reserved 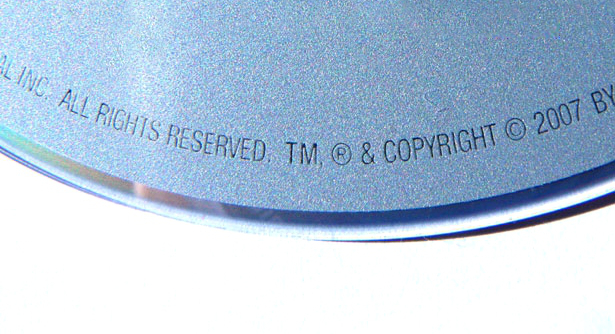 ", " economical with the truth", " kick the bucket", and the like. It may be a euphemism, a saying or proverb, a fixed expression, a
figure of speech A figure of speech or rhetorical figure is a word or phrase that entails an intentional deviation from ordinary language use in order to produce a rhetoric Rhetoric () is the Art (skill), art of persuasion, which along with grammar an ...
, etc. In grammatical analysis, particularly in theories of
syntax In linguistics, syntax () is the set of rules, principles, and processes that govern the structure of Sentence (linguistics), sentences (sentence structure) in a given Natural language, language, usually including word order. The term ''syntax'' ...
, a phrase is any group of words, or sometimes a single word, which plays a particular role within the grammatical structure of a sentence. It does not have to have any special meaning or significance, or even exist anywhere outside of the sentence being analyzed, but it must function there as a complete grammatical unit. For example, in the sentence ''Yesterday I saw an orange bird with a white neck'', the words ''an orange bird with a white neck'' form what is called a
noun phraseA noun phrase, or nominal (phrase), is a phrase that has a noun (or indefinite pronoun) as its head (linguistics), head or performs the same grammatical function as a noun. Noun phrases are very common linguistic typology, cross-linguistically, and t ...
, or a
determiner phrase In linguistics, a determiner phrase (DP) is a type of phrase posited by some theories of syntax. The head (linguistics), head of a DP is a determiner, as opposed to a noun. For example in the phrase ''the car'', ''the'' is a determiner and ''car'' i ...
in some theories, which functions as the object of the sentence. Theorists of syntax differ in exactly what they regard as a phrase; however, it is usually required to be a constituent of a sentence, in that it must include all the dependent (grammar), dependents of the units that it contains. This means that some expressions that may be called phrases in everyday language are not phrases in the technical sense. For example, in the sentence ''I can't put up with Alex'', the words ''put up with'' (meaning 'tolerate') may be referred to in common language as a phrase (English expressions like this are frequently called phrasal verbs) but technically they do not form a complete phrase, since they do not include ''Alex'', which is the complement (grammar), complement of the preposition ''with''.

In grammatical analysis, most phrases contain a key word that identifies the type and linguistic features of the phrase; this is known as the head-word, or the head (linguistics), head. The syntactic category of the head is used to name the category of the phrase; for example, a phrase whose head is a noun is called a
noun phraseA noun phrase, or nominal (phrase), is a phrase that has a noun (or indefinite pronoun) as its head (linguistics), head or performs the same grammatical function as a noun. Noun phrases are very common linguistic typology, cross-linguistically, and t ...
. The remaining words in a phrase are called the dependent (grammar), dependents of the head. In the following phrases the head-word, or head, is bolded: ::too slowly — Adverb phrase (AdvP); the head is an adverb ::very happy — Adjective phrase (AP); the head is an adjective ::the massive dinosaur — Noun phrase (NP); the head is a noun (but see #Functional categories, below for the ''determiner phrase'' analysis) ::at lunch — Preposition phrase (PP); the head is a preposition ::watch TV — Verb phrase (VP); the head is a verb The above five examples are the most common of phrase types; but, by the logic of heads and dependents, others can be routinely produced. For instance, the subordinator phrase: ::before that happened — Subordinator phrase (SP); the head is a subordinating conjunction—it subordinates the independent clause By linguistic analysis this is a group of words that qualifies as a phrase, and the head-word gives its syntactic name, "subordinator", to the grammatical category of the entire phrase. But this phrase, "before that happened", is more commonly classified in other grammars, including traditional English grammars, as a subordinate clause (or dependent clause); and it is then labelled ''not'' as a phrase, but as a
clause In language, a clause is a part of the sentence that constitutes or comprises a predicate (grammar), predicate. A typical clause consists of a subject (grammar), subject and a predicate, the latter typically a verb phrase, a verb with any object ...
. Most theories of syntax view most phrases as having a head, but some non-headed phrases are acknowledged. A phrase lacking a head is known as exocentric, and phrases with heads are endocentric.

Some modern theories of syntax introduce certain functional category, functional categories in which the head of a phrase is some functional word or item, which may even be covert (linguistics), covert, that is, it may be a theoretical construct that need not appear explicitly in the sentence. For example, in some theories, a phrase such as ''the man'' is taken to have the determiner ''the'' as its head, rather than the noun ''man'' – it is then classed as a determiner phrase (DP), rather than a noun phrase (NP). When a noun is used in a sentence without an explicit determiner, a null (covert) determiner may be posited. For full discussion, see Determiner phrase. Another type is the inflectional phrase, where (for example) a finite verb phrase is taken to be the complement of a functional, possibly covert head (denoted INFL) which is supposed to encode the requirements for the verb to inflection, inflect – for agreement (grammar), agreement with its subject (which is the Specifier (linguistics), specifier of INFL), for grammatical tense, tense and grammatical aspect, aspect, etc. If these factors are treated separately, then more specific categories may be considered: ''tense phrase'' (TP), where the verb phrase is the complement of an abstract "tense" element; ''aspect phrase''; ''agreement phrase'' and so on. Further examples of such proposed categories include ''topic phrase'' and ''focus phrase'', which are assumed to be headed by elements that encode the need for a constituent of the sentence to be marked as the topic (linguistics), topic or as the focus (linguistics), focus. See the Focus (linguistics)#Generative approaches, Generative approaches section of the latter article for details.

Many theories of syntax and grammar illustrate sentence structure using phrase 'parse tree, trees', which provide schematics of how the words in a sentence are grouped and relate to each other. Trees show the words, phrases, and, at times, clauses that make up sentences. Any word combination that corresponds to a complete subtree can be seen as a phrase. There are two established and competing principles for constructing trees; they produce 'constituency' and 'dependency' trees and both are illustrated here using an example sentence. The constituency-based tree is on the left and the dependency-based tree is on the right: :: 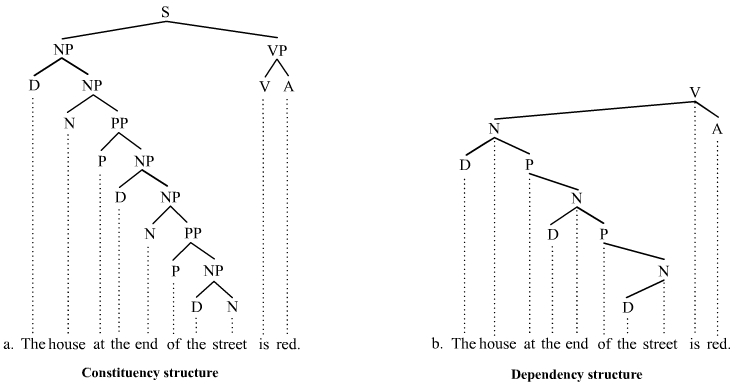 The tree on the left is of the constituency-based, phrase structure grammar, and the tree on the right is of the dependency grammar. The node labels in the two trees mark the syntactic category of the different constituent (linguistics), constituents, or word elements, of the sentence. In the constituency tree each phrase is marked by a phrasal node (NP, PP, VP); and there are eight phrases identified by phrase structure analysis in the example sentence. On the other hand, the dependency tree identifies a phrase by any node that exerts dependency upon, or dominates, another node. And, using dependency analysis, there are six phrases in the sentence. The trees and phrase-counts demonstrate that different theories of syntax differ in the word combinations they qualify as a phrase. Here the constituency tree identifies three phrases that the dependency tree does not, namely: ''house at the end of the street'', ''end of the street'', and ''the end''. More analysis, including about the plausibilities of both grammars, can be made empirically by applying constituent (linguistics), constituency tests.

Confusion: phrases in theories of syntax

The common use of the term "phrase" is different from that employed by some phrase structure theories of syntax. The everyday understanding of the phrase is that it consists of two or more words, whereas depending on the theory of syntax that one employs, individual words may or may not qualify as phrases. The trees in the previous section, for instance, do not view individual words as phrases. Theories of syntax that employ X-bar theory, in contrast, will acknowledge many individual words as phrases. This practice is because sentence structure is analysed in terms of a universal schema, the X-bar schema, which sees each head as projecting at least three levels of structure: a minimal level, an intermediate level, and a maximal level. Thus an individual noun (N), such as ''Susan'' in ''Susan laughed'', will project up to an intermediate level (N') and a maximal level (NP, noun phrase), which means that ''Susan'' qualifies as a phrase. (The subject slot in the sentence is required to be filled by an NP, so regardless of whether the subject is a multi-word unit like ''the tall woman'', or a single word performing the same function, like ''Susan'', it is called an NP in these theories.) This concept of the phrase is a source of confusion for students of syntax. Many other theories of syntax do not employ the X-bar schema and are therefore less likely to encounter this confusion. For instance, dependency grammars do not acknowledge phrase structure in the manner associated with phrase structure grammars and therefore do not acknowledge individual words as phrases, a fact that is evident in the dependency grammar trees above and below.

The verb phrase (VP) as a source of controversy