upright=1.3|4.5mm pellet exiting an air pistol, photographed with a high speed air-gap flash A pellet is a non-spherical projectile designed to be shot from an air gun, and an airgun that shoots such pellets is commonly known as a pellet gun. Air gun pellets differ from bullets and shot used in firearms in terms of the pressures encountered; airguns operate at pressures as low as 50 atmospheres, while firearms operate at thousands of atmospheres. Airguns generally use a slightly undersized projectile that is designed to obturate upon shooting so as to seal the bore, and engage the rifling; firearms have sufficient pressure to force a slightly oversized bullet to fit the bore in order to form a tight seal. Since pellets may be shot through a smoothbore barrel, they are often designed to be inherently stable, much like the Foster slugs used in smoothbore shotguns. 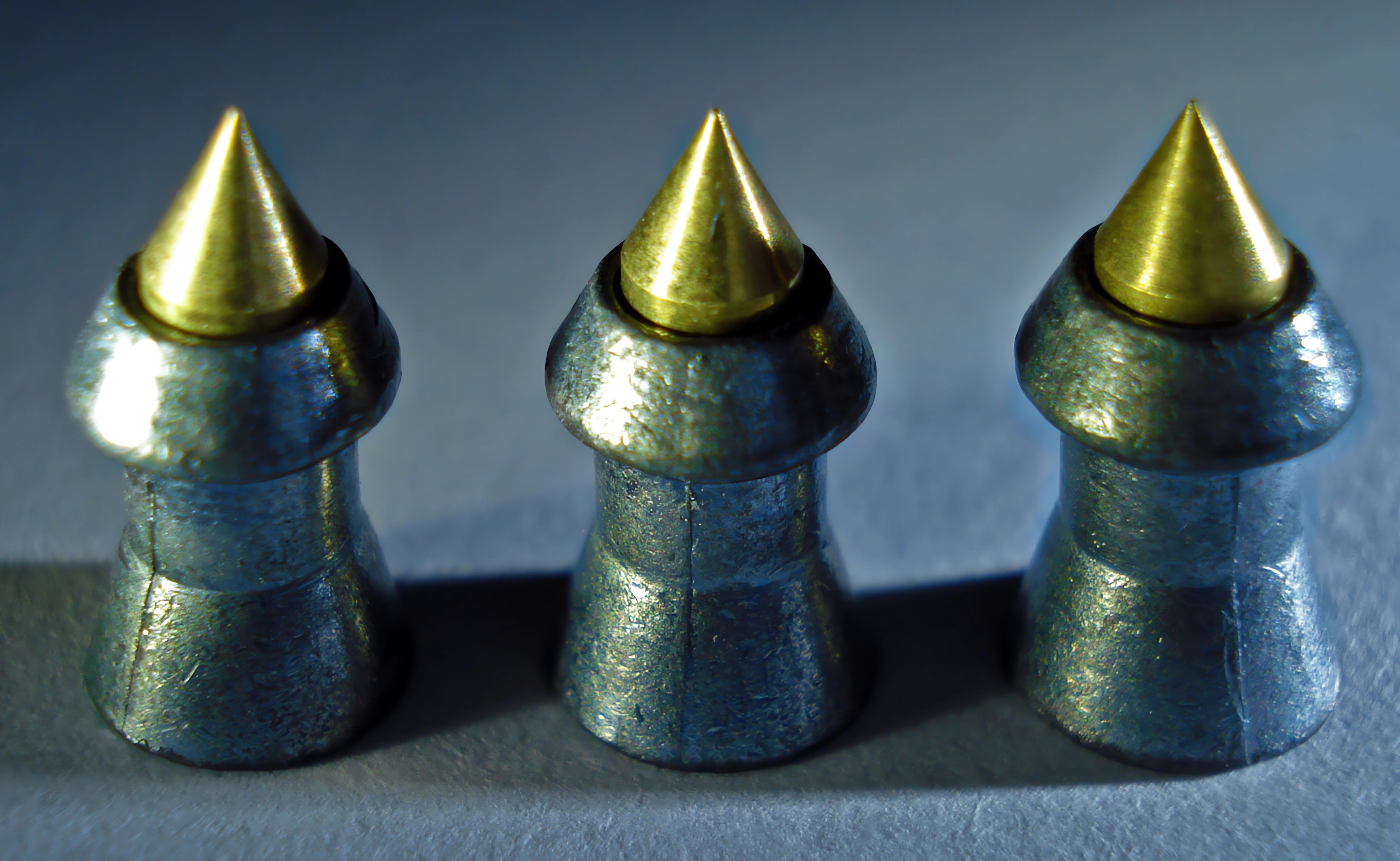 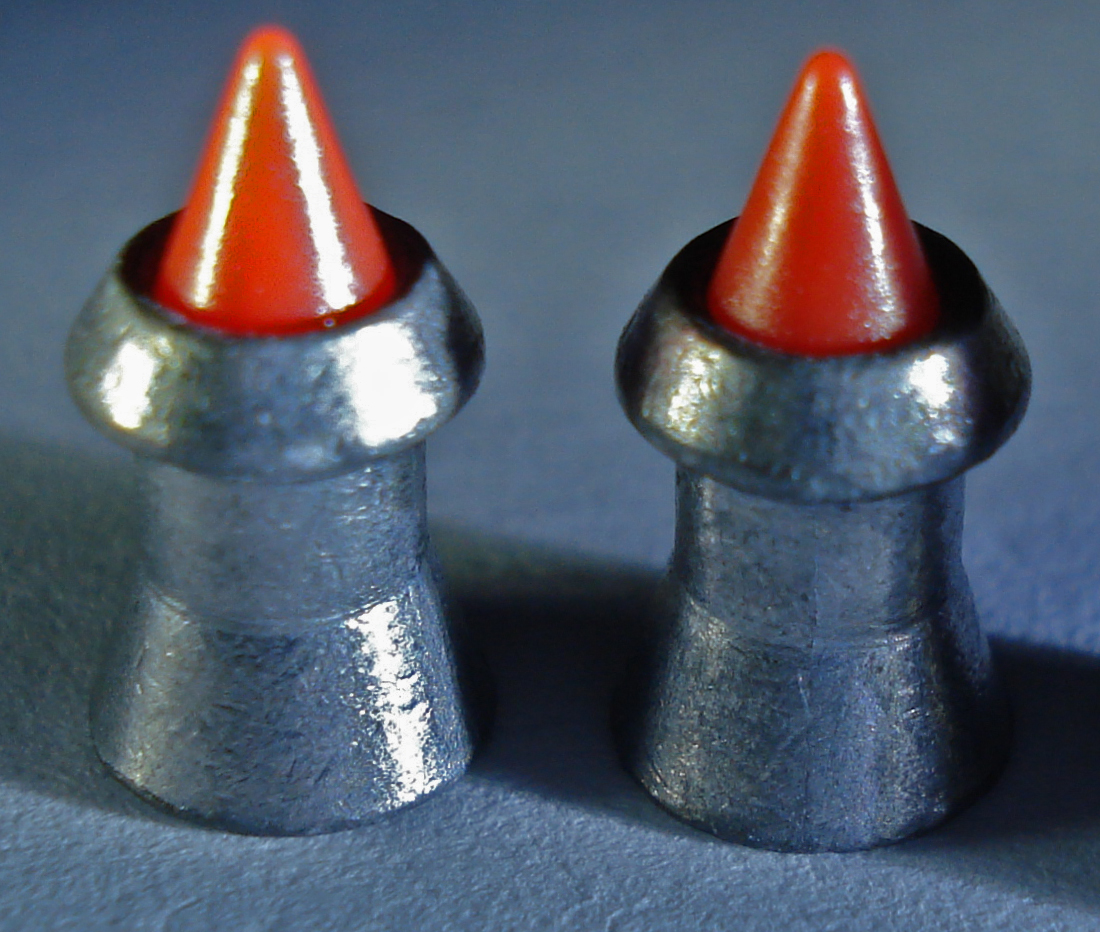 The diabolo pellet (or "wasp waist pellet") is the most common design traditionally found in airguns. It consists of a solid front portion called the ''head'', which can have a flat ("wadcutter"), hemispherical ("round nose"), hollow point or conical ("pointed") front end profile, and a thin-walled funnel-shaped hollow rear portion called the ''skirt'', joined together by an hourglass-looking narrow mid-section known as the ''waist'', giving the whole pellet the shape of a diabolo. The head is usually sized to just touch the rifling, and this keeps the pellet centered in the bore while keeping the friction as low as possible. The effect of friction is used in order to keep the pellet stationary until the piston has reached the end of its travel, compressing as much air as is possible. The thin hollow skirt is made of a malleable material, usually lead, although non-toxic alternatives are available that use tin or even plastic. During shooting, the skirt flares out and obturates the bore when pressure builds up behind it to provide a good seal that allows efficient pellet acceleration, and engages the rifling whereby imparting spin. In a smoothbore barrel, the skirt will still flare to provide a tight seal, but since there is no rifling the pellet will not spin, and is less accurate. Because the majority of the pellet's mass resides in the solid head in the front, and the hollow skirt in the back generates significant drag during flight, this creates ''drag stability'' that will counteract yawing and help to maintain consistent trajectories. However, such stability is limited, and if the pellet's speed exceeds what the aerodynamics allow it will become unstable and start tumbling in flight. When this happens, the pellet can hit the target sideways and leave behind a keyhole-shaped impact hole on the target paper, instead of a clean round hole as expected from a direct frontal hit. This phenomenon is known as keyholing. Pellets are designed to travel at subsonic speeds. High velocities can cause light pellets to overly deform, or even break apart in flight. The transition from subsonic to supersonic velocities will cause almost all pellets to tumble. The closer a pellet gets to the speed of sound, the more unstable it becomes. This is a problem for high-powered "magnum" break-barrel and pre-charged pneumatic air rifles, which are capable of pushing lighter pellets beyond the sound barrier. A few companies have addressed this issue by manufacturing heavier-than-normal pellets for use in these high powered air guns. The heavier weight of these pellets ensures lower muzzle velocities, resulting in less chance of tumbling and more overall accuracy. Their weight also makes them sectionally denser and less susceptible to wind deviation and drag deceleration, and thus imparts better external and terminal ballistic performance.

Recently, some manufacturers also have introduced the more cylindro-conoidally shaped "slug" pellets for some of the more powerful modern PCP air rifles. Contrasted to the commonly used diabolo pellets, these slug pellets resemble Minié balls, with cannelures and a hollow base, and have more contact surface with the bore and hence need greater propelling force to overcome friction, but they have better ballistic coefficients and thus longer effective ranges due to the more aerodynamic shape. Because these slug pellets have no skirts to generate enough drag stability in flight, they rely on spin stabilization from a fully rifled barrel.

Performance Ballistic Alloy (PBA) pellets are made from a non-lead alloy and designed to penetrate a target whereas lead pellets are designed to expand or mushroom and release its energy inside the target. PBA pellets minimize weight while retaining hardness because of their alloy composition. These pellets are most notable for increasing an air rifle’s or pistol's maximum feet per second (FPS) potential due to their light weight.

Match pellets are used for the 10 metre air rifle and 10 metre air pistol disciplines. These calibre pellets have wadcutter heads, meaning the front is (nearly) flat, that leave clean, hole punch-like round holes in paper targets for easy scoring. Match pellets are offered in tins and more elaborate packagings that avoid deformation and other damage that could impair their uniformity. Match pellets are made of soft lead (a lead alloy with low antimony content). The antimony content is used to control the hardness of the soft lead alloy. It is a very soft alloy, which makes it easy to process. Since the soft lead alloy is prone to strongly deform when striking a bullet catcher, it rapidly loses its kinetic energy and will not easily bounce off. Lead is toxic and hazardous to the environment, so when shooting with lead pellets, precautions should be taken. Match air gun shooters are encouraged to perform shooting group tests with their gun clamped in a fixed rest in order to establish which particular pellet type performs best for their air gun. To facilitate maximum performance out of various air guns the leading match pellet manufacturers produce pellets in graduated weight variants (the light/high speed variants are often marketed for air pistol use) and with graduated "head sizes", which means the pellets are offered with front diameters from up to . However at higher and top competitive levels, even these variations are thought too coarse-grained and match pellets are ''batch tested''; that is, the specific gun is mounted in a machine rest test rig and pellets from a specific production run on a specific machine with the same ingredients fed into the process (a ''batch'') are test-fired through the gun. Many different batches will be tested in this manner, and the pellets which give the smallest ''consistent'' group size without fliers (shots which fall outside of the main group) will be selected (small but inconsistent group sizes are not useful to a top competitor); and the shooter will then purchase several tens of thousands of pellets from that batch. Group sizes of diameter are theoretically possible, but practically shot groups of are considered highly competitive.