In kinematics, objects' paths through space are commonly described as parametric curves, with each spatial coordinate depending explicitly on an independent parameter (usually time). Used in this way, the set of parametric equations for the object's coordinates collectively constitute a vector-valued function for position. Such parametric curves can then be integrated and differentiated termwise. Thus, if a particle's position is described parametrically as : then its velocity can be found as : and its acceleration as :.

Numerous problems in integer geometry can be solved using parametric equations. A classical such solution is Euclid's parametrization of right triangles such that the lengths of their sides and their hypotenuse are coprime integers. As ''a'' and ''b'' are not both even (otherwise and would not be coprime), one may exchange them to have even, and the parameterization is then : where the parameters and are positive coprime integers that are not both odd. By multiplying and by an arbitrary positive integer, one gets a parametrization of all right triangles whose three sides have integer lengths.

Converting a set of parametric equations to a single implicit equation involves eliminating the variable from the simultaneous equations This process is called implicitization. If one of these equations can be solved for ''t'', the expression obtained can be substituted into the other equation to obtain an equation involving ''x'' and ''y'' only: Solving to obtain and using this in gives the explicit equation while more complicated cases will give an implicit equation of the form If the parametrization is given by rational functions : where are set-wise coprime polynomials, a resultant computation allows one to implicitize. More precisely, the implicit equation is the resultant with respect to of and In higher dimension (either more than two coordinates of more than one parameter), the implicitization of rational parametric equations may by done with Gröbner basis computation; see Gröbner basis § Implicitization in higher dimension. To take the example of the circle of radius ''a'', the parametric equations : can be implicitized in terms of ''x'' and ''y'' by way of the Pythagorean trigonometric identity: As : and : we get : and thus : which is the standard equation of a circle centered at the origin.

The simplest equation for a parabola, : can be (trivially) parameterized by using a free parameter ''t'', and setting :

More generally, any curve given by an explicit equation : can be (trivially) parameterized by using a free parameter ''t'', and setting :

A more sophisticated example is the following. Consider the unit circle which is described by the ordinary (Cartesian) equation : This equation can be parameterized as follows: : With the Cartesian equation it is easier to check whether a point lies on the circle or not. With the parametric version it is easier to obtain points on a plot. In some contexts, parametric equations involving only rational functions (that is fractions of two polynomials) are preferred, if they exist. In the case of the circle, such a ''rational parameterization'' is : With this pair of parametric equations, the point is not represented by a real value of , but by the limit of and when tends to infinity.

An ellipse in canonical position (center at origin, major axis along the ''X''-axis) with semi-axes ''a'' and ''b'' can be represented parametrically as : An ellipse in general position can be expressed as : as the parameter ''t'' varies from 0 to 2''π''. Here is the center of the ellipse, and is the angle between the -axis and the major axis of the ellipse. Both parameterizations may be made rational by using the tangent half-angle formula and setting

Other examples are shown: : 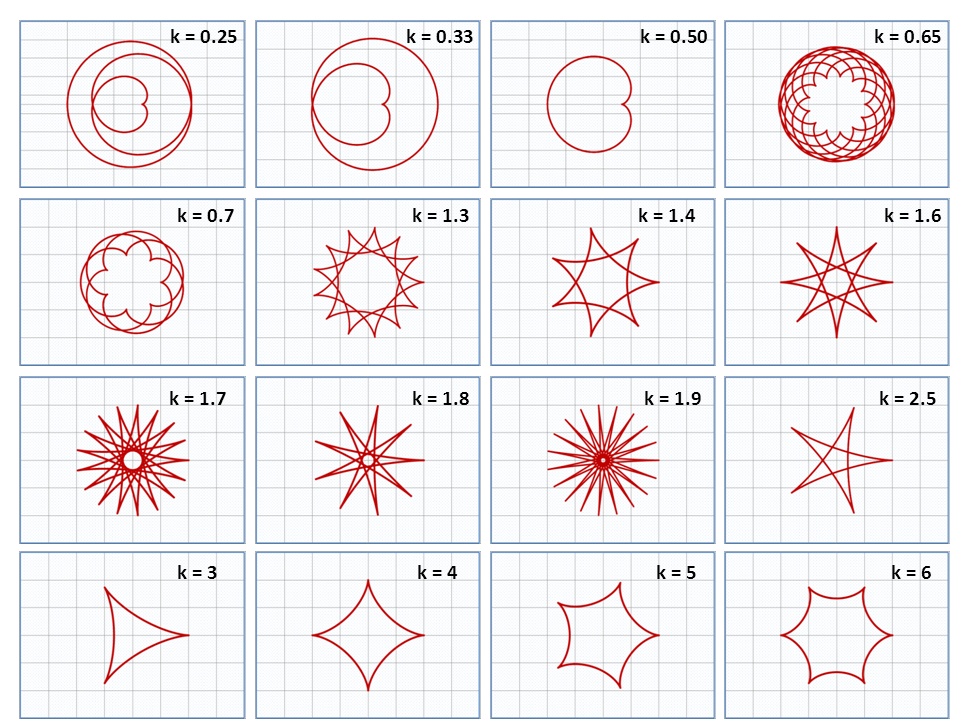 The parametric equation of the line through the point and parallel to the vector is :