Ornithischia () is an extinct clade of mainly herbivorous dinosaurs characterized by a pelvic structure superficially similar to that of birds. The name ''Ornithischia'', or "bird-hipped", reflects this similarity and is derived from the Greek stem ' (), meaning "of a bird", and ' (), plural ', meaning "hip joint". However, birds are only distantly related to this group as birds are theropod dinosaurs. Ornithischians with well known anatomical adaptations include the ceratopsians or "horn-faced" dinosaurs (e.g. ''Triceratops''), armored dinosaurs (Thyreophora) such as stegosaurs and ankylosaurs, pachycephalosaurs and the ornithopods. There is strong evidence that certain groups of ornithischians lived in herds, often segregated by age group, with juveniles forming their own flocks separate from adults. Some were at least partially covered in filamentous (hair- or feather- like) pelts, and there is much debate over whether these filaments found in specimens of ''Tianyulong'', ''Psittacosaurus'', and ''Kulindadromeus'' may have been primitive feathers.

In 1887, Harry Seeley divided Dinosauria into two clades: Ornithischia and Saurischia. Ornithischia is a strongly supported clade with an abundance of diagnostic characters (common traits). The two most notable traits are a "bird-like" hip and beak-like predentary structure, though they shared other features as well.

The ornithischian pelvis was "opisthopubic", meaning that the pubis pointed down and backwards (posterior), parallel with the ischium (Figure 1a). Additionally, the ilium had a forward-pointing process (the preacetabular process) to support the abdomen. This resulted in a four-pronged pelvic structure. In contrast to this, the saurischian pelvis was "propubic", meaning the pubis pointed toward the head (anterior), as in ancestral reptiles (Figure 1b). The opisthopubic pelvis independently evolved at least three times in dinosaurs (in ornithischians, birds and therizinosauroids). Some argue that the opisthopubic pelvis evolved a fourth time, in the clade Dromaeosauridae, but this is controversial, as other authors argue that dromaeosaurids are mesopubic. 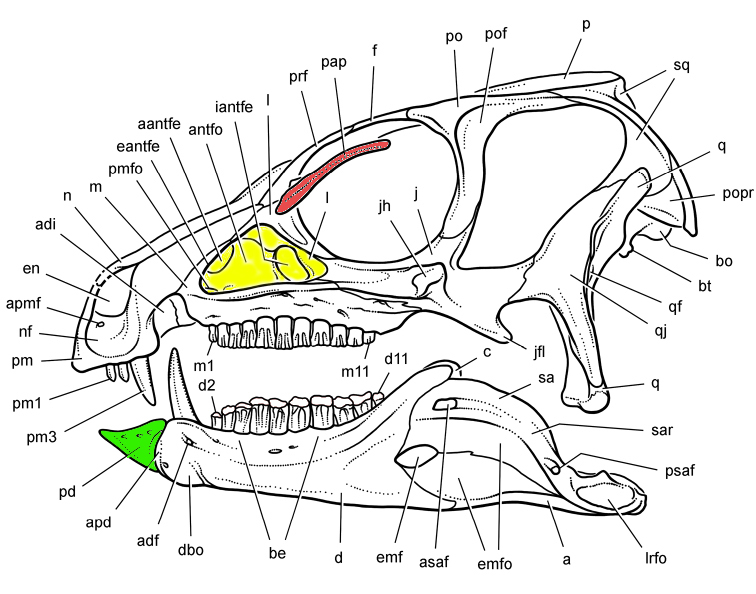 Ornithischians shared a unique bone called the predentary (Figure 2). This unpaired bone was situated at the front of the lower jaw, where it extended the dentary (the main lower jaw bone). The predentary coincided with the premaxilla in the upper jaw. Together, they formed a beak-like apparatus used to clip off plant material. In ceratopsian dinosaurs, it opposed the rostral bone. In 2017 Baron & Barrett suggested that ''Chilesaurus'' may represent an early diverging ornithischian that had not yet acquired the predentary of all other ornithischians.

Ornithischia is a branch-based taxon defined as all dinosaurs more closely related to ''Triceratops horridus'' Marsh, 1889 than to either ''Passer domesticus'' (Linnaeus, 1758) or ''Saltasaurus loricatus'' Bonaparte & Powell, 1980. Genasauria comprises the clades Thyreophora and Neornithischia. Thyreophora includes Stegosauria (like the armored ''Stegosaurus'') and Ankylosauria (like ''Ankylosaurus''). Neornithischia comprises several basal taxa, Marginocephalia (Ceratopsia and Pachycephalosauria), and Ornithopoda (including duck-bills (hadrosaurs), such as ''Edmontosaurus)''. Cerapoda is a relatively recent concept (Sereno, 1986). The cladogram below follows a 2009 analysis by Zheng and colleagues. All tested members of Heterodontosauridae form a polytomy. Cladogram after Butler ''et al.'', 2011. Ornithopoda includes ''Hypsilophodon'', ''Jeholosaurus'' and others. Currently, the exact placement of Ornithischia within the dinosaur lineage is a contentious issue. Traditionally, Ornithischia is considered the sister group of Saurischia (which contains Theropoda and Sauropodomorpha). However, in the alternative hypothesis of dinosaur relationships that was proposed by Baron, Norman & Barrett in the journal ''Nature'' in 2017, Ornithischia was recovered as the sister group to the Theropoda, which grouped together in the clade Ornithoscelida. This hypothesis was recently challenged by an international consortium of early dinosaur experts led by Max Langer. However, the data that supported the more traditional placement of Ornithischia, as sister taxon of Saurischia, was found not to be statistically significant from the evidence that supported the Ornithoscelida hypothesis, in both the study by Langer ''et al.'' and the reply to the study by Baron ''et al.'' A further 2017 study found some support for the previously abandoned Phytodinosauria model, which classifies ornithischians together with sauropodomorphs.

Ornithischians shifted from bipedal to quadrupedal posture at least three times in their evolutionary history and it has been shown primitive members may have been capable of both forms of movement. Most ornithischians were herbivorous. In fact, most of the unifying characters of Ornithischia are thought to be related to this herbivory. For example, the shift to an opisthopubic pelvis is thought to be related to the development of a large stomach or stomachs and gut which would allow ornithischians to digest plant matter better. The smallest known ornithischian is ''Fruitadens haagarorum''. The largest ''Fruitadens'' individuals reached just 65–75 cm. Previously, only carnivorous, saurischian theropods were known to reach such small sizes. At the other end of the spectrum, the largest known ornithischians reach about 15 meters (smaller than the largest saurischians). However, not all ornithischians were strictly herbivorous. Some groups, like the heterodontosaurids, were likely omnivores. At least one species of ankylosaurian, ''Liaoningosaurus paradoxus'', appears to have been at least partially carnivorous, with hooked claws, fork-like teeth, and stomach contents suggesting that it may have fed on fish. There is strong evidence that some ornithischians lived in herds. This evidence consists of multiple bone beds where large numbers of individuals of the same species and of different age groups died simultaneously.