, 1989 A lahar (, from jv|ꦮ꧀ꦭꦲꦂ) is a violent type of mudflow or debris flow composed of a slurry of pyroclastic material, rocky debris and water. The material flows down from a volcano, typically along a river valley. Lahars are extremely destructive: they can flow tens of metres per second, they have been known to be up to deep, and large flows tend to destroy any structures in their path. Notable lahars include those at Mount Pinatubo and Nevado del Ruiz, the latter of which killed thousands of people in the town of Armero.

The word ''lahar'' is of Javanese origin. The geological term was introduced by Berend George Escher in 1922.

The word ''lahar'' is a general term used to describe a flowing mixture of water and pyroclastic debris; it does not specifically refer to a particular rheology or sediment concentration. Lahars can exist as normal stream flows (sediment concentration of less than 30%), hyper-concentrated stream flows (sediment concentration between 30-60%), or debris flows (sediment concentration exceeding 60%). Indeed, the rheology and subsequent behaviour of a lahar flow may vary in space and time within a single event, owing to changes in sediment supply and water supply. Lahars may be described as 'primary' or 'syn-eruptive', if they occur simultaneously with, or are triggered by, primary volcanic activity. 'Secondary' or 'post-eruptive' lahars occur in the absence of primary volcanic activity, e.g. as a result of rainfall during pauses in activity or during dormancy. In addition to their variable rheology, lahars vary considerably in magnitude. The Osceola Lahar produced by Mount Rainier (Washington) some 5600 years ago resulted in a wall of mud deep in the White River canyon, which covered an area of over , for a total volume of . A lahar of sufficient size and intensity can erase virtually any structure in its path, and is capable of carving its own pathway, making the prediction of its course difficult. Conversely, a lahar quickly loses force when it leaves the channel of its flow: even frail huts may remain standing, while at the same time being buried to the roof line in mud. A lahar's viscosity decreases with time, and can be further thinned by rain, but it nevertheless solidifies quickly when coming to a stop. Lahars vary in size and speed. Small lahars less than a few metres wide and several centimetres deep may flow a few metres per second. Large lahars hundreds of metres wide and tens of metres deep can flow several tens of metres per second (22 mph or more): much too fast for people to outrun. On steep slopes, lahar speeds can exceed . With the potential to flow distances of more than , a lahar can cause catastrophic destruction in its path. Lahars from the 1985 Nevado del Ruiz eruption in Colombia caused the Armero tragedy, which killed an estimated 23,000 people, when the city of Armero was buried under of mud and debris. A lahar caused New Zealand's Tangiwai disaster, where 151 people died after a Christmas Eve express train fell into the Whangaehu River in 1953. Lahars have been responsible for 17% of volcano-related deaths between 1783 and 1997.

Lahars have several possible causes: * Snow and glaciers can be melted by lava or pyroclastic surges during an eruption. * Lava can erupt from open vents and mix with wet soil, mud or snow on the slope of the volcano making a very viscous, high energy lahar. The higher up the slope of the volcano, the more gravitational potential energy the flows will have. *A flood caused by a glacier, lake breakout, or heavy rainfalls can generate lahars, also called glacier run or jökulhlaup * Water from a crater lake, combined with volcanic material in an eruption. * Heavy rainfall on unconsolidated pyroclastic deposits. * Volcanic landslides mixed with water. In particular, although lahars are typically associated with the effects of volcanic activity, lahars can occur even without any current volcanic activity, as long as the conditions are right to cause the collapse and movement of mud originating from existing volcanic ash deposits. * Snow and glaciers can melt during periods of mild to hot weather. * Earthquakes underneath or close to the volcano can shake material loose and cause it to collapse, triggering a lahar avalanche. * Rainfall can cause the still-hanging slabs of solidified mud to come rushing down the slopes at a speed of more than , causing devastating results. 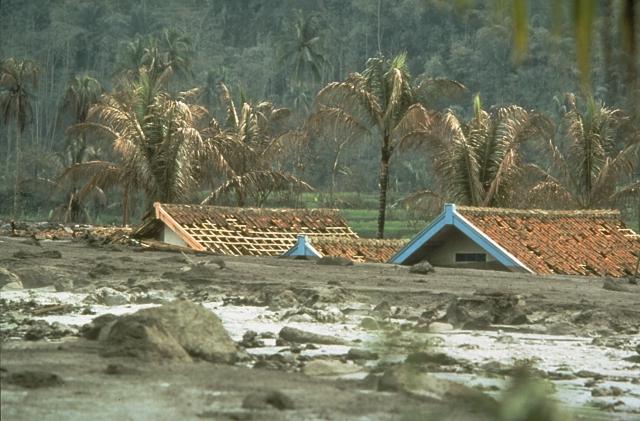 Several mountains in the world – including Mount Rainier in the United States, Mount Ruapehu in New Zealand, and Merapi and Galunggung in Indonesia – are considered particularly dangerous due to the risk of lahars. Several towns in the Puyallup River valley in Washington state, including Orting, are built on top of lahar deposits that are only about 500 years old. Lahars are predicted to flow through the valley every 500 to 1,000 years, so Orting, Sumner, Puyallup, Fife, and the Port of Tacoma face considerable risk. The USGS has set up lahar warning sirens in Pierce County, Washington, so that people can flee an approaching debris flow in the event of a Mount Rainier eruption. A lahar warning system has been set up at Mount Ruapehu by the New Zealand Department of Conservation and hailed as a success after it successfully alerted officials to an impending lahar on 18 March 2007. Since mid-June 1991, when violent eruptions triggered Mount Pinatubo's first lahars in 500 years, a system to monitor and warn of lahars has been in operation. Radio-telemetered rain gauges provide data on rainfall in lahar source regions, acoustic flow monitors on stream banks detect ground vibration as lahars pass, and manned watchpoints further confirm that lahars are rushing down Pinatubo's slopes. This system has enabled warnings to be sounded for most but not all major lahars at Pinatubo, saving hundreds of lives. Physical preventative measures by the Philippine government were not adequate to stop over of mud from flooding many villages around Mount Pinatubo from 1992 through 1998. Scientists and governments try to identify areas with a high risk of lahars based on historical events and computer models. Volcano scientists play a critical role in effective hazard education by informing officials and the public about realistic hazard probabilities and scenarios (including potential magnitude, timing, and impacts); by helping evaluate the effectiveness of proposed risk-reduction strategies; by helping promote acceptance of (and confidence in) hazards information through participatory engagement with officials and vulnerable communities as partners in risk reduction efforts; and by communicating with emergency managers during extreme events. An example of such a model is TITAN2D. These models are directed towards future planning: identifying low-risk regions to place community buildings, discovering how to mitigate lahars with dams, and constructing evacuation plans.

The lahar from the 1985 eruption of wiped_out_the_town_of_Armero_in_[[Colombia.html" style="text-decoration: none;"class="mw-redirect" title="Armero tragedy">wiped out the town of Armero in [[Colombia">Armero tragedy">wiped out the town of Armero in [[Colombia In 1985, the volcano [[Nevado del Ruiz erupted in central Colombia. As [[pyroclastic flows erupted from the [[volcanic crater|volcano's crater, they melted the mountain's glaciers, sending four enormous lahars down its slopes at . The lahars picked up speed in gullies and coursed into the six major rivers at the base of the volcano; they engulfed the town of Armero, killing more than 20,000 of its almost 29,000 inhabitants. Casualties in other towns, particularly Chinchiná, brought the overall death toll to 23,000. Footage and photographs of Omayra Sánchez, a young victim of the tragedy, were published around the world. Other photographs of the lahars and the impact of the disaster captured attention worldwide and led to controversy over the degree to which the Colombian government was responsible for the disaster. 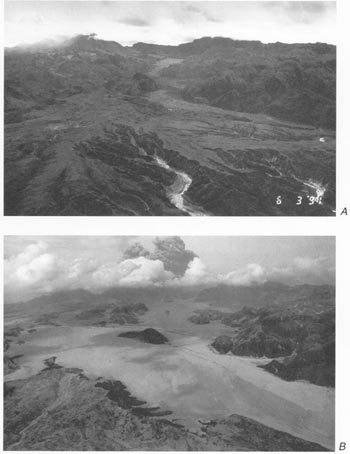 The 1991 eruption of Mount Pinatubo caused lahars: the first eruption itself killed six people, but the lahar killed more than 1500. The eye of Typhoon Yunya passed over the volcano during its eruption on June 15, 1991. The rain from the typhoon triggered the flow of volcanic ash, boulders, and water down the rivers surrounding the volcano. In Pampanga, Angeles and neighbouring cities and towns were damaged by the volcano's lahar when Sapang Balen Creek and the Abacan River became the channels for the mudflows and carried it to the heart of the city and surrounding areas. Over of mud inundated and damaged the towns of Castillejos, San Marcelino and Botolan in Zambales, Porac and Mabalacat in Pampanga, Tarlac City, Capas, Concepcion and Bamban in Tarlac. The lahar in the Sacobia-Bamban River scoured all structures in its path, including the bridges and dikes by the Parua River in Concepcion. The Tarlac River in Tarlac City was inundated by over of lahar, causing the river to lose the ability to hold water. On the morning of October 1, 1995, pyroclastic material which clung to the slopes of Pinatubo and surrounding mountains rushed down because of heavy rain, and turned into an lahar. This mudflow killed hundreds of people in Barangay Cabalantian in Bacolor. The Philippine government under President Fidel V. Ramos ordered the construction of the FVR Mega Dike in an attempt to protect people from further mudflows. Another typhoon-caused lahar hit the Philippines in 2006; see Typhoon Reming.