In
mathematics Mathematics is an area of knowledge that includes the topics of numbers, formulas and related structures, shapes and the spaces in which they are contained, and quantities and their changes. These topics are represented in modern mathematics ...
, the inverse function of a function (also called the inverse of ) is a function that undoes the operation of . The inverse of exists if and only if is bijective, and if it exists, is denoted by For a function , its inverse admits an explicit description: it sends each element to the unique element such that . As an example, consider the real-valued function of a real variable given by . One can think of as the function which multiplies its input by 5 then subtracts 7 from the result. To undo this, one adds 7 to the input, then divides the result by 5. Therefore, the inverse of is the function defined by

Let be a function whose domain is the set , and whose codomain is the set . Then is ''invertible'' if there exists a function from to such that for all and for all . If is invertible, then there is exactly one function satisfying this property. The function is called the inverse of , and is usually denoted as , a notation introduced by John Frederick William Herschel in 1813. The function is invertible if and only if it is bijective. This is because the condition for all implies that is injective, and the condition for all implies that is surjective. The inverse function to can be explicitly described as the function :.

Recall that if is an invertible function with domain and codomain , then : , for every and for every . Using the composition of functions, this statement can be rewritten to the following equations between functions: : and where is the identity function on the set ; that is, the function that leaves its argument unchanged. In category theory, this statement is used as the definition of an inverse morphism. Considering function composition helps to understand the notation . Repeatedly composing a function with itself is called iteration. If is applied times, starting with the value , then this is written as ; so , etc. Since , composing and yields , "undoing" the effect of one application of .

The following table shows several standard functions and their inverses:

Formula for the inverse

Many functions given by algebraic formulas possess a formula for their inverse. This is because the inverse of an invertible function has an explicit description as : . This allows one to easily determine inverses of many functions that are given by algebraic formulas. For example, if is the function : then to determine for a real number , one must find the unique real number such that . This equation can be solved: : Thus the inverse function is given by the formula : Sometimes, the inverse of a function cannot be expressed by a closed-form formula. For example, if is the function : then is a bijection, and therefore possesses an inverse function . The formula for this inverse has an expression as an infinite sum: :

There is a symmetry between a function and its inverse. Specifically, if is an invertible function with domain and codomain , then its inverse has domain and image , and the inverse of is the original function . In symbols, for functions and , : and This statement is a consequence of the implication that for to be invertible it must be bijective. The involutory nature of the inverse can be concisely expressed by : The inverse of a composition of functions is given by : Notice that the order of and have been reversed; to undo followed by , we must first undo , and then undo . For example, let and let . Then the composition is the function that first multiplies by three and then adds five, : To reverse this process, we must first subtract five, and then divide by three, : This is the composition .

Graph of the inverse

* Let be the function that converts a temperature in degrees Celsius to a temperature in degrees Fahrenheit, then its inverse function converts degrees Fahrenheit to degrees Celsius, since * Suppose assigns each child in a family its birth year. An inverse function would output which child was born in a given year. However, if the family has children born in the same year (for instance, twins or triplets, etc.) then the output cannot be known when the input is the common birth year. As well, if a year is given in which no child was born then a child cannot be named. But if each child was born in a separate year, and if we restrict attention to the three years in which a child was born, then we do have an inverse function. For example, * Let be the function that leads to an percentage rise of some quantity, and be the function producing an percentage fall. Applied to $100 with = 10%, we find that applying the first function followed by the second does not restore the original value of $100, demonstrating the fact that, despite appearances, these two functions are not inverses of each other. * The formula to calculate the pH of a solution is . In many cases we need to find the concentration of acid from a pH measurement. The inverse function is used. 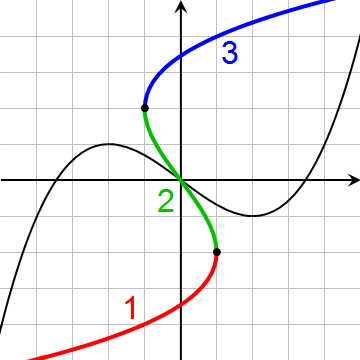 Sometimes, this multivalued inverse is called the full inverse of , and the portions (such as and −) are called ''branches''. The most important branch of a multivalued function (e.g. the positive square root) is called the '' principal branch'', and its value at is called the ''principal value'' of . For a continuous function on the real line, one branch is required between each pair of local extrema. For example, the inverse of a cubic function with a local maximum and a local minimum has three branches (see the adjacent picture). These considerations are particularly important for defining the inverses of trigonometric functions. For example, the sine function is not one-to-one, since : for every real (and more generally for every
integer An integer is the number zero (), a positive natural number (, , , etc.) or a negative integer with a minus sign (−1, −2, −3, etc.). The negative numbers are the additive inverses of the corresponding positive numbers. In the language of ...
). However, the sine is one-to-one on the interval , and the corresponding partial inverse is called the arcsine. This is considered the principal branch of the inverse sine, so the principal value of the inverse sine is always between − and . The following table describes the principal branch of each inverse trigonometric function:

Function composition on the left and on the right need not coincide. In general, the conditions # "There exists such that " and # "There exists such that " imply different properties of . For example, let denote the squaring map, such that for all in , and let denote the square root map, such that for all . Then for all in ; that is, is a right inverse to . However, is not a left inverse to , since, e.g., .

If , a left inverse for (or '' retraction'' of ) is a function such that composing with from the left gives the identity function That is, the function satisfies the rule : If , then . The function must equal the inverse of on the image of , but may take any values for elements of not in the image. A function with nonempty domain is injective if and only if it has a left inverse. An elementary proof runs as follows: * If is the left inverse of , and , then . *

If nonempty is injective, construct a left inverse as follows: for all , if is in the image of , then there exists such that . Let ; this definition is unique because is injective. Otherwise, let be an arbitrary element of .

For all , is in the image of . By construction, , the condition for a left inverse.

In classical mathematics, every injective function with a nonempty domain necessarily has a left inverse; however, this may fail in constructive mathematics. For instance, a left inverse of the inclusion of the two-element set in the reals violates indecomposability by giving a retraction of the real line to the set .

If is any function (not necessarily invertible), the preimage (or inverse image) of an element is defined to be the set of all elements of that map to : : The preimage of can be thought of as the image of under the (multivalued) full inverse of the function . Similarly, if is any subset of , the preimage of , denoted , is the set of all elements of that map to : : For example, take the function . This function is not invertible as it is not bijective, but preimages may be defined for subsets of the codomain, e.g. : . The preimage of a single element – a singleton set – is sometimes called the '' fiber'' of . When is the set of real numbers, it is common to refer to as a '' level set''.