Hyenas, or hyaenas (from Ancient Greek , ), are feliform carnivoran mammals of the family Hyaenidae . With only four extant species (in three genera), it is the fifth-smallest biological family in the Carnivora and one of the smallest in the class Mammalia. Despite their low diversity, hyenas are unique and vital components of most African ecosystems. Although phylogenetically closer to felines and viverrids, as part of suborder Feliformia, hyenas are behaviourally and morphologically similar to canids in several elements due to convergent evolution; both hyenas and canines are non-arboreal, cursorial hunters that catch prey with their teeth rather than claws. Both eat food quickly and may store it, and their calloused feet with large, blunt, nonretractable claws are adapted for running and making sharp turns. However, hyenas' grooming, scent marking, defecation habits, mating and parental behaviour are consistent with the behaviour of other feliforms. Hyenas feature prominently in the folklore and mythology of human cultures that live alongside them. Hyenas are commonly viewed as frightening and worthy of contempt. In some cultures, hyenas are thought to influence people's spirits, rob graves, and steal livestock and children. Other cultures associate them with witchcraft, using their body parts in traditional African medicine.

Hyenas originated in the jungles of Miocene Eurasia 22 million years ago, when most early feliform species were still largely arboreal. The first ancestral hyenas were likely similar to the modern African civet; one of the earliest hyena species described, ''Plioviverrops'', was a lithe, civet-like animal that inhabited Eurasia 20–22 million years ago, and is identifiable as a hyaenid by the structure of the middle ear and dentition. The lineage of ''Plioviverrops'' prospered, and gave rise to descendants with longer legs and more pointed jaws, a direction similar to that taken by canids in North America. Hyenas then diversified into two distinct types: lightly built dog-like hyenas and robust bone-crushing hyenas. Although the dog-like hyenas thrived 15 million years ago (with one taxon having colonised North America), they became extinct after a change in climate, along with the arrival of canids into Eurasia. Of the dog-like hyena lineage, only the insectivorous aardwolf survived, while the bone-crushing hyenas (including the extant spotted, brown and striped hyenas) became the undisputed top scavengers of Eurasia and Africa.

Rise and fall of the dog-like hyenas

The descendants of ''Plioviverrops'' reached their peak 15 million years ago, with more than 30 species having been identified. Unlike most modern hyena species, which are specialised bone-crushers, these dog-like hyenas were nimble-bodied, wolfish animals; one species among them was ''Ictitherium viverrinum'', which was similar to a jackal. The dog-like hyenas were numerous; in some Miocene fossil sites, the remains of ''Ictitherium'' and other dog-like hyenas outnumber those of all other carnivores combined. The decline of the dog-like hyenas began 5–7 million years ago during a period of climate change, exacerbated by canids crossing the Bering land bridge to Eurasia. One species, ''Chasmaporthetes ossifragus'', managed to cross the land bridge into North America, being the only hyena to do so. ''Chasmaporthetes'' managed to survive for some time in North America by deviating from the cursorial and bone-crushing niches monopolised by canids, and developing into a cheetah-like sprinter. Most of the dog-like hyenas had died off by 1.5 million years ago.

By 10–14 million years ago, the hyena family had split into two distinct groups: dog-like hyenas and bone-crushing hyenas. The arrival of the ancestral bone-crushing hyenas coincided with the decline of the similarly built family Percrocutidae. The bone-crushing hyenas survived the changes in climate and the arrival of canids, which wiped out the dog-like hyenas, though they never crossed into North America, as their niche there had already been taken by the dog subfamily Borophaginae. By 5 million years ago, the bone-crushing hyenas had become the dominant scavengers of Eurasia, primarily feeding on large herbivore carcasses felled by sabre-toothed cats. One genus, ''Pachycrocuta'', was a 200 kg (440 lb) mega-scavenger that could splinter the bones of elephants. With the decline of large herbivores by the late ice age, ''Pachycrocuta'' was replaced by the smaller ''Crocuta''. 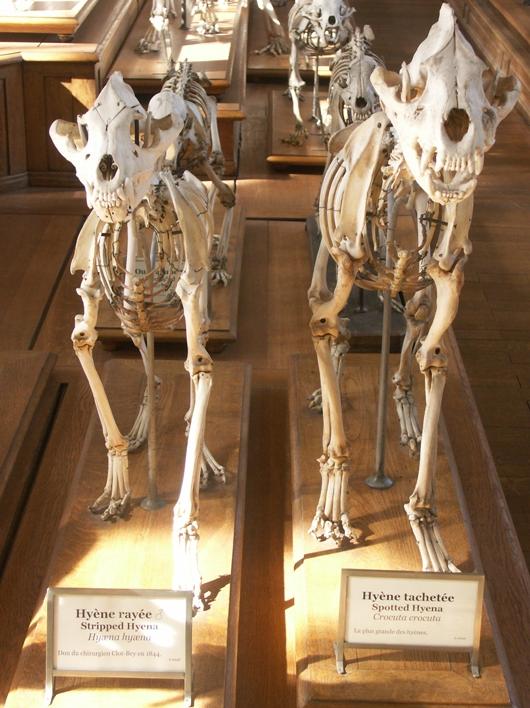 The four extant species are the striped hyena (''Hyaena hyaena''), the brown hyena (''Hyaena brunnea''), the spotted hyena (''Crocuta crocuta''), and the aardwolf (''Proteles cristata''). The aardwolf can trace its lineage directly back to ''Plioviverrops'' 15 million years ago, and is the only survivor of the dog-like hyena lineage. Its success is partly attributed to its insectivorous diet, for which it faced no competition from canids crossing from North America. It is likely that its unrivaled ability to digest the terpene excretions from soldier termites is a modification of the strong digestive system its ancestors used to consume fetid carrion. The striped hyena may have evolved from ''H. namaquensis'' of Pliocene Africa. Striped hyena fossils are common in Africa, with records going back as far as the Villafranchian. As fossil striped hyenas are absent from the Mediterranean region, it is likely that the species is a relatively late invader to Eurasia, having likely spread outside Africa only after the extinction of spotted hyenas in Asia at the end of the Ice Age. The striped hyena occurred for some time in Europe during the Pleistocene, having been particularly widespread in France and Germany. It also occurred in Montmaurin, Hollabrunn in Austria, the Furninha Cave in Portugal and the Genista Caves in Gibraltar. The European form was similar in appearance to modern populations, but was larger, being comparable in size to the brown hyena. The spotted hyena (''Crocuta crocuta'') diverged from the striped and brown hyena 10 million years ago. Its direct ancestor was the Indian ''Crocuta sivalensis'', which lived during the Villafranchian. Ancestral spotted hyenas probably developed social behaviours in response to increased pressure from rivals on carcasses, thus forcing them to operate in teams. Spotted hyenas evolved sharp carnassials behind their crushing premolars, therefore they did not need to wait for their prey to die, and thus became pack hunters as well as scavengers. They began forming increasingly larger territories, necessitated by the fact that their prey was often migratory, and long chases in a small territory would have caused them to encroach into another clan's turf. Spotted hyenas spread from their original homeland during the Middle Pleistocene, and quickly colonised a very wide area from Europe, to southern Africa and China. With the decline of grasslands 12,500 years ago, Europe experienced a massive loss of lowland habitats favoured by spotted hyenas, and a corresponding increase in mixed woodlands. Spotted hyenas, under these circumstances, would have been outcompeted by wolves and humans, who were as much at home in forests as in open lands—and in highlands as in lowlands. Spotted hyena populations began to shrink after roughly 20,000 years ago, completely disappearing from Western Europe between 11 and 14 thousand years ago, and earlier in some areas.

Genera of the Hyaenidae (extinct and recent)