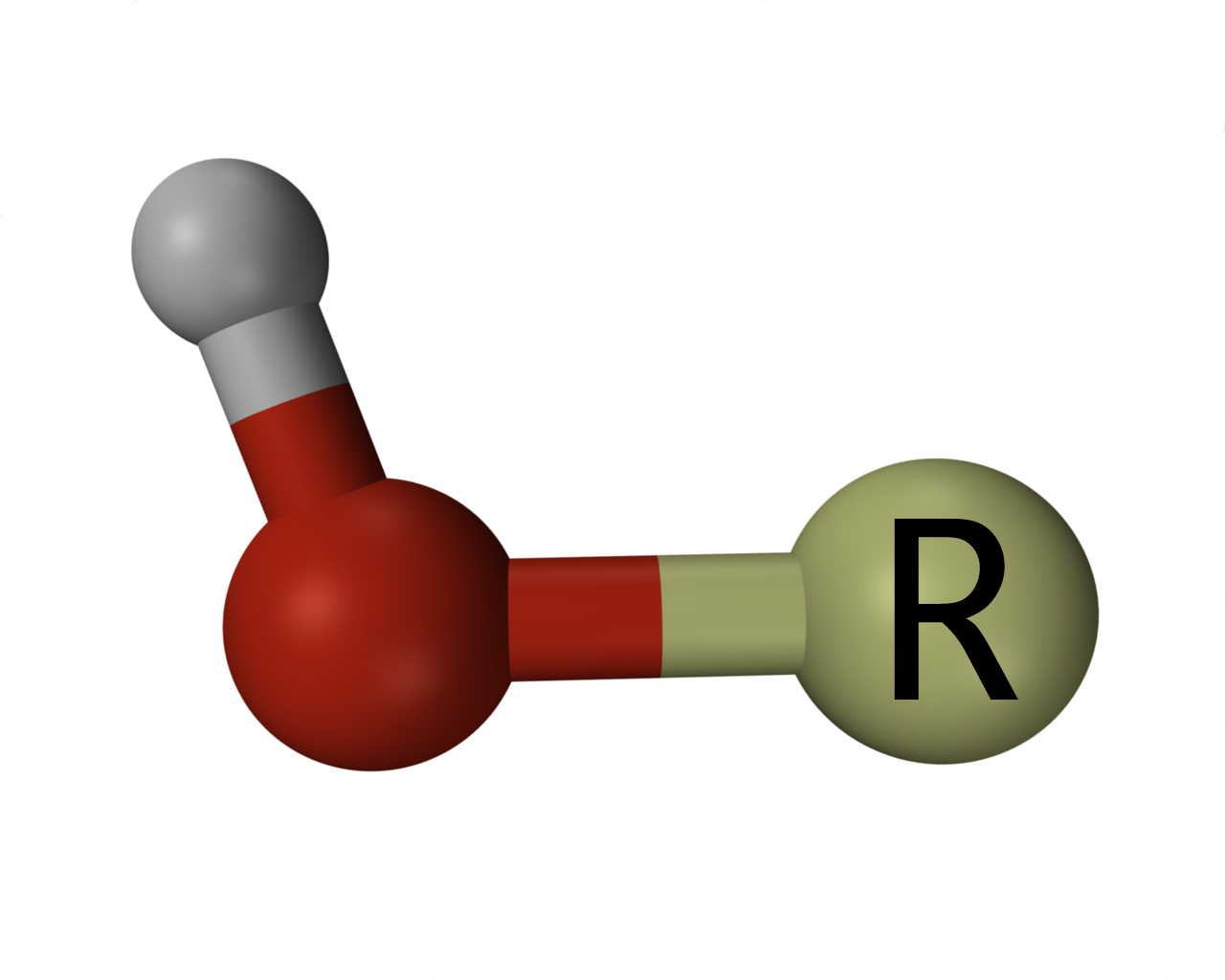 A hydroxy or hydroxyl group is a functional group with the chemical formula -OH and composed of one oxygen atom covalently bonded to one hydrogen atom. In organic chemistry, alcohols and carboxylic acids contain one or more hydroxy groups. Both the negatively charged anion OH−, called hydroxide, and the neutral radical ·OH, known as the hydroxyl radical, consist of an unbounded hydroxyl group. According to IUPAC definitions, the term hydroxyl refers to the hydroxyl radical (·OH) only, while the functional group −OH is called hydroxy group.

Water, alcohols, carboxylic acids, and many other hydroxy-containing compounds can be readily deprotonated due to a large difference between the electronegativity of oxygen (3.5) and that of hydrogen (2.1). Hydroxy-containing compounds engage in intermolecular hydrogen bonding increasing the electrostatic attraction between molecules and thus to higher boiling and melting points than found for compounds that lack this functional group. Organic compounds, which are often poorly soluble in water, become water-soluble when they contain two or more hydroxy groups, as illustrated by sugars and amino acid.

Hydroxyl radicals are highly reactive and undergo chemical reactions that make them short-lived. When biological systems are exposed to hydroxyl radicals, they can cause damage to cells, including those in humans, where they can react with DNA, lipids, and proteins.

Airglow of the Earth

Surface of the Moon

In 2009, India's Chandrayaan-1 satellite and the National Aeronautics and Space Administration (NASA) Cassini spacecraft and Deep Impact probe each detected evidence of water by evidence of hydroxyl fragments on the Moon. As reported by Richard Kerr, "A spectrometer he Moon Mineralogy Mapper, a.k.a. "M3"detected an infrared absorption at a wavelength of 3.0 micrometers that only water or hydroxyl—a hydrogen and an oxygen bound together—could have created." NASA also reported in 2009 that the LCROSS probe revealed an ultraviolet emission spectrum consistent with hydroxyl presence. On October 26, 2020, NASA reported definitive evidence of water on the sunlit surface of the Moon, in the vicinity of the crater Clavius (crater), obtained by the Stratospheric Observatory for Infrared Astronomy (SOFIA). The SOFIA Faint Object infrared Camera for the SOFIA Telescope (FORCAST) detected emission bands at a wavelength of 6.1 micrometers that are present in water but not in hydroxyl. The abundance of water on the Moon's surface was inferred to be equivalent to the contents of a 12-ounce bottle of water per cubic meter of lunar soil.

The Venus Express orbiter collected Venus science data from April 2006 until December 2014. In 2008, Piccioni, ''et al.'' reported measurements of night-side airglow emission in the atmosphere of Venus made with the Visible and Infrared Thermal Imaging Spectrometer (VIRTIS) on Venus Express. They attributed emission bands in wavelength ranges of 1.40 - 1.49 micrometers and 2.6 - 3.14  micrometers to vibrational transitions of OH. This was the first evidence for OH in the atmosphere of any planet other than Earth's.

In 2013, OH near-infrared spectra were observed in the night glow in the polar winter atmosphere of Mars by use of the Compact Reconnaissance Imaging Spectrometer for Mars (CRISM).