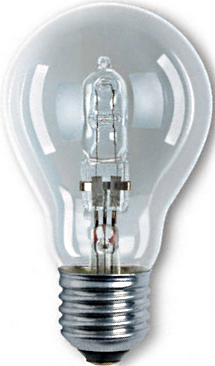 A halogen lamp, also known as a tungsten halogen, quartz-halogen or quartz iodine lamp, is an incandescent lamp consisting of a tungsten filament sealed into a compact transparent envelope that is filled with a mixture of an inert gas and a small amount of a halogen such as iodine or bromine. The combination of the halogen gas and the tungsten filament produces a halogen cycle chemical reaction which redeposits evaporated tungsten to the filament, increasing its life and maintaining the clarity of the envelope. This allows the filament to operate at a higher temperature than a standard incandescent lamp of similar power and operating life; this also produces light with higher luminous efficacy and color temperature. The small size of halogen lamps permits their use in compact optical systems for projectors and illumination. The small glass envelope may be enclosed in a much larger outer glass bulb for a bigger package; the outer jacket will be at a much lower and safer temperature, and it also protects the hot bulb from harmful contamination and makes the bulb mechanically more similar to a conventional lamp that it might replace. Standard and halogen incandescent bulbs are much less efficient than LED and compact fluorescent lamps, and have been subjected to phase out in many jurisdictions because of this.

A carbon filament lamp using chlorine to prevent darkening of the envelope was patented in 1882, and chlorine-filled "NoVak" lamps were marketed in 1892. The use of iodine was proposed in a 1933 patent, which also described the cyclic redeposition of tungsten back onto the filament. In 1959, General Electric patented a practical lamp using iodine.

In ordinary incandescent lamps, evaporated tungsten mostly deposits onto the inner surface of the bulb, causing the bulb to blacken and the filament to grow increasingly weak until it eventually breaks. The presence of the halogen, however, sets up a reversible chemical reaction cycle with this evaporated tungsten. The halogen cycle keeps the bulb clean and causes the light output to remain almost constant throughout the bulb's life. At moderate temperatures the halogen reacts with the evaporating tungsten, the halide formed being moved around in the inert gas filling. At some point, however, it will reach higher temperature regions within the bulb where it then dissociates, releasing tungsten back onto the filament and freeing the halogen to repeat the process. However, the overall bulb envelope temperature must be significantly higher than in conventional incandescent lamps for this reaction to succeed: it is only at temperatures of above on the inside of the glass envelope that the halogen vapor can combine with the tungsten and return it to the filament rather than the tungsten becoming deposited on the glass. A 300 watt tubular halogen bulb operated at full power quickly reaches a temperature of about , while a 500 watt regular incandescent bulb operates at only and a 75 watt regular incandescent at only . The bulb must be made of fused silica (quartz) or a high-melting-point glass (such as aluminosilicate glass). Since quartz is very strong, the gas pressure can be higher, which reduces the rate of evaporation of the filament, permitting it to run a higher temperature (and so luminous efficacy) for the same average life. The tungsten released in hotter regions does not generally redeposit where it came from, so the hotter parts of the filament eventually thin out and fail. Quartz iodine lamps, using elemental iodine, were the first commercial halogen lamps launched by GE in 1959. Quite soon, bromine was found to have advantages, but was not used in elemental form. Certain hydrocarbon bromine compounds gave good results. Regeneration of the filament is also possible with fluorine, but its chemical reactivity is so great that other parts of the lamp are attacked. The halogen is normally mixed with a noble gas, often krypton or xenon. The first lamps used only tungsten for filament supports, but some designs use molybdenum – an example being the molybdenum shield in the H4 twin filament headlight for the European Asymmetric Passing Beam. For a fixed power and life, the luminous efficacy of all incandescent lamps is greatest at a particular design voltage. Halogen lamps made for 12 to 24 volt operation have good light outputs, and the very compact filaments are particularly beneficial for optical control (see picture). The ranges of multifaceted reflector "MR" lamps of 20–50 watts were originally conceived for the projection of 8 mm film, but are now widely used for display lighting and in the home. More recently, wider beam versions have become available designed for direct use on supply voltages of 120 or .

Effect of voltage on performance

Tungsten halogen lamps behave in a similar manner to other incandescent lamps when run on a different voltage. However the light output is reported as proportional to , and the luminous efficacy proportional to . The normal relationship regarding the lifetime is that it is proportional to . For example, a bulb operated at 5% higher than its design voltage would produce about 15% more light, and the luminous efficacy would be about 6.5% higher, but would be expected to have only half the rated life. Halogen lamps are manufactured with enough halogen to match the rate of tungsten evaporation at their design voltage. Increasing the applied voltage increases the rate of evaporation, so at some point there may be insufficient halogen and the lamp goes black. Over-voltage operation is not generally recommended. With a reduced voltage the evaporation is lower and there may be too much halogen, which can lead to abnormal failure. At much lower voltages, the bulb temperature may be too low to support the halogen cycle, but by this time the evaporation rate is too low for the bulb to blacken significantly. If the bulbs do blacken, it is recommended to run the lamps at the rated voltage to restart the cycle. There are many situations where halogen lamps are dimmed successfully. However, lamp life may not be extended as much as predicted. The life span on dimming depends on lamp construction, the halogen additive used and whether dimming is normally expected for this type.

Like all incandescent light bulbs, a halogen lamp produces a continuous spectrum of light, from near ultraviolet to deep into the infrared. Since the lamp filament can operate at a higher temperature than a non-halogen lamp, the spectrum is shifted toward blue, producing light with a higher effective color temperature and higher power efficiency. This makes halogen lamps the only option for consumer light source with black-body radiation spectrum similar to that of the Sun and most suitable for the eyes. Alternatively, multi-component glasses can be used, which have a natural UV-block. These glasses belong to the family of the aluminosilicate-glasses. High temperature filaments emit some energy in the UV region. Small amounts of other elements can be mixed into the quartz, so that the ''doped'' quartz (or selective optical coating) blocks harmful UV radiation. Hard glass blocks UV and has been used extensively for the bulbs of car headlights. Alternatively, the halogen lamp can be mounted inside an outer bulb, similar to an ordinary incandescent lamp, which also reduces the risks from the high bulb temperature. Undoped quartz halogen lamps are used in some scientific, medical and dental instruments as a UV-B source. 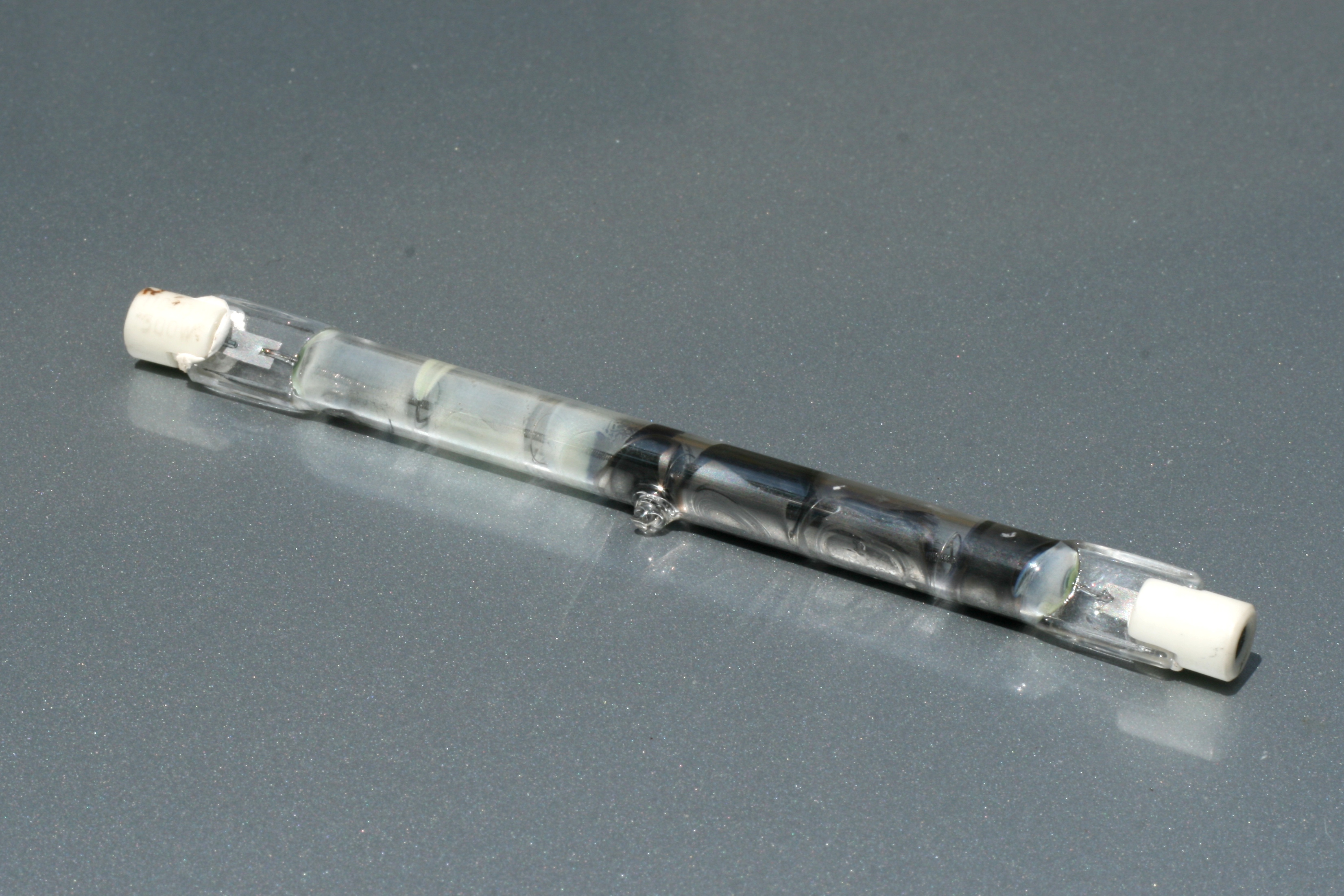 Halogen lamps must run at much higher temperatures than regular incandescent lamps for proper operation. Their small size helps to concentrate the heat on a smaller envelope surface, closer to the filament than a non-halogen incandescent. Because of the very high temperatures, halogen lamps can pose fire and burn hazards. In Australia, numerous house fires each year are attributed to ceiling-mounted halogen downlights. The Western Australia Department of Fire and Emergency Services recommends that home owners consider instead using cooler-running compact fluorescent lamps or light emitting diode lamps. Some safety codes require halogen bulbs to be protected by a grid or grille, especially for high-power (1–2 kW) bulbs used in theatre, or by the glass and metal housing of the fixture, to prevent ignition of draperies or flammable objects in contact with the lamp. To reduce unintentional ultraviolet (UV) exposure, and to contain hot bulb fragments in the event of explosive bulb failure, general-purpose lamps usually have a UV-absorbing glass filter over or around the bulb. Alternatively, lamp bulbs may be doped or coated to filter out the UV radiation. With adequate filtering, a halogen lamp exposes users to less UV than a standard incandescent lamp producing the same effective level of illumination without filtering. Any surface contamination, notably the oil from human fingertips, can damage the quartz envelope when it is heated. Contaminants, because they absorb more light and heat than the glass does, will create a hot spot on the bulb surface when the lamp is turned on. This extreme, localized heat causes the quartz to change from its vitreous form into a weaker, crystalline form that leaks gas. This weakening may also cause the bulb to form a bubble, weakening it and leading to its explosion. The small glass envelope may be enclosed in a much larger outer glass bulb, which provides several advantages if small size is not required: