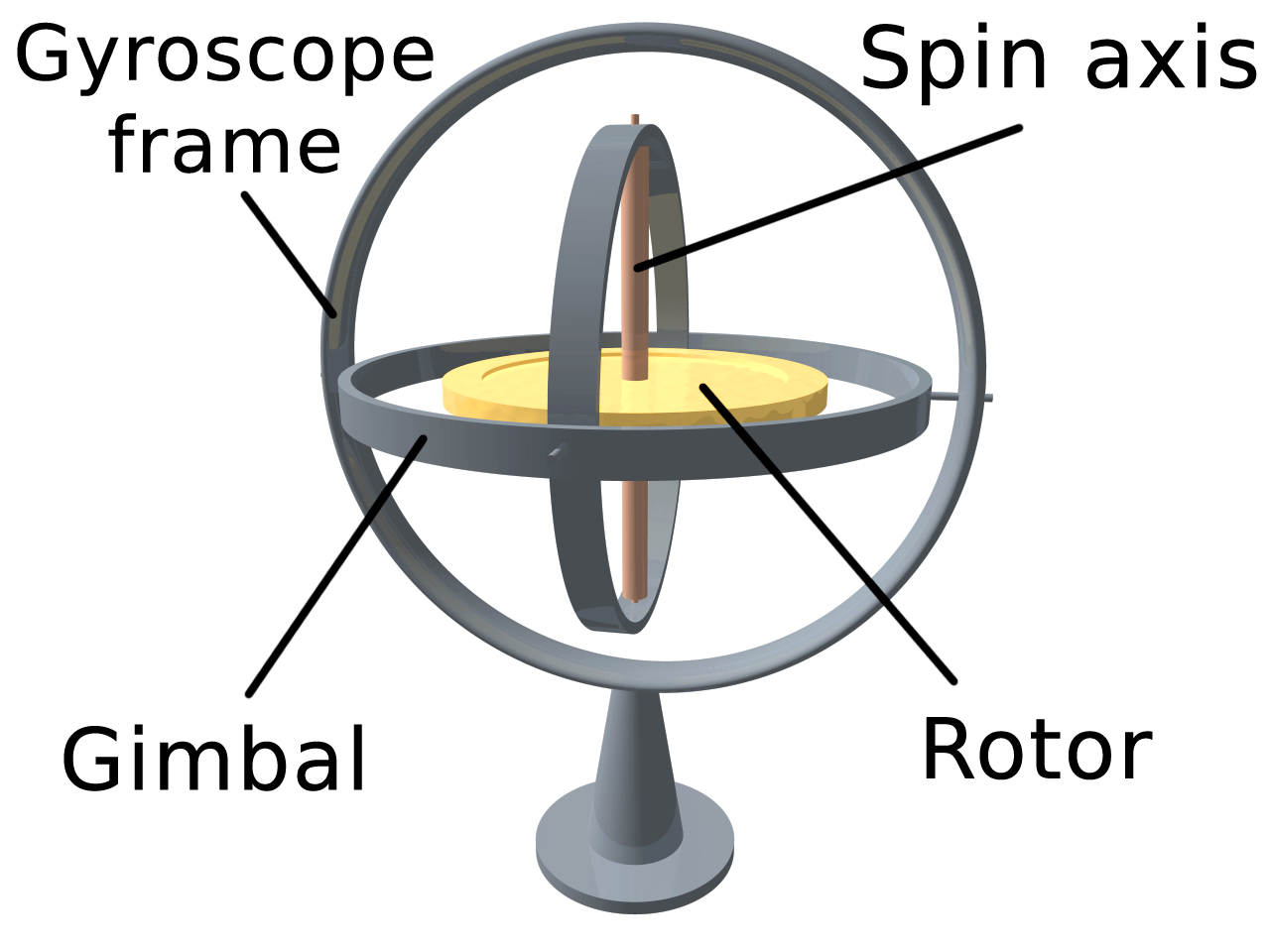 A gyroscope (from Ancient Greek γῦρος ''gûros'', "circle" and σκοπέω ''skopéō'', "to look") is a device used for measuring or maintaining orientation and angular velocity. It is a spinning wheel or disc in which the axis of rotation (spin axis) is free to assume any orientation by itself. When rotating, the orientation of this axis is unaffected by tilting or rotation of the mounting, according to the conservation of angular momentum. Gyroscopes based on other operating principles also exist, such as the microchip-packaged MEMS gyroscopes found in electronic devices (sometimes called gyrometers), solid-state ring lasers, fibre optic gyroscopes, and the extremely sensitive quantum gyroscope. Applications of gyroscopes include inertial navigation systems, such as in the Hubble Telescope, or inside the steel hull of a submerged submarine. Due to their precision, gyroscopes are also used in gyrotheodolites to maintain direction in tunnel mining. Gyroscopes can be used to construct gyrocompasses, which complement or replace magnetic compasses (in ships, aircraft and spacecraft, vehicles in general), to assist in stability (bicycles, motorcycles, and ships) or be used as part of an inertial guidance system. MEMS gyroscopes are popular in some consumer electronics, such as smartphones.

A gyroscope is an instrument, consisting of a wheel mounted into two or three gimbals providing pivoted supports, for allowing the wheel to rotate about a single axis. A set of three gimbals, one mounted on the other with orthogonal pivot axes, may be used to allow a wheel mounted on the innermost gimbal to have an orientation remaining independent of the orientation, in space, of its support. In the case of a gyroscope with two gimbals, the outer gimbal, which is the gyroscope frame, is mounted so as to pivot about an axis in its own plane determined by the support. This outer gimbal possesses one degree of rotational freedom and its axis possesses none. The second gimbal, inner gimbal, is mounted in the gyroscope frame (outer gimbal) so as to pivot about an axis in its own plane that is always perpendicular to the pivotal axis of the gyroscope frame (outer gimbal). This inner gimbal has two degrees of rotational freedom. The axle of the spinning wheel defines the spin axis. The rotor is constrained to spin about an axis, which is always perpendicular to the axis of the inner gimbal. So the rotor possesses three degrees of rotational freedom and its axis possesses two. The wheel responds to a force applied to the input axis by a reaction force to the output axis. The behaviour of a gyroscope can be most easily appreciated by consideration of the front wheel of a bicycle. If the wheel is leaned away from the vertical so that the top of the wheel moves to the left, the forward rim of the wheel also turns to the left. In other words, rotation on one axis of the turning wheel produces rotation of the third axis. A gyroscope flywheel will roll or resist about the output axis depending upon whether the output gimbals are of a free or fixed configuration. Examples of some free-output-gimbal devices would be the attitude reference gyroscopes used to sense or measure the pitch, roll and yaw attitude angles in a spacecraft or aircraft.

The centre of gravity of the rotor can be in a fixed position. The rotor simultaneously spins about one axis and is capable of oscillating about the two other axes, and it is free to turn in any direction about the fixed point (except for its inherent resistance caused by rotor spin). Some gyroscopes have mechanical equivalents substituted for one or more of the elements. For example, the spinning rotor may be suspended in a fluid, instead of being mounted in gimbals. A control moment gyroscope (CMG) is an example of a fixed-output-gimbal device that is used on spacecraft to hold or maintain a desired attitude angle or pointing direction using the gyroscopic resistance force. In some special cases, the outer gimbal (or its equivalent) may be omitted so that the rotor has only two degrees of freedom. In other cases, the centre of gravity of the rotor may be offset from the axis of oscillation, and thus the centre of gravity of the rotor and the centre of suspension of the rotor may not coincide.

Essentially, a gyroscope is a top combined with a pair of gimbals. Tops were invented in many different civilizations, including classical Greece, Rome, and China. Most of these were not utilized as instruments. The first known apparatus similar to a gyroscope (the "Whirling Speculum" or "Serson's Speculum") was invented by John Serson in 1743. It was used as a level, to locate the horizon in foggy or misty conditions. The first instrument used more like an actual gyroscope was made by Johann Bohnenberger of Germany, who first wrote about it in 1817. At first he called it the "Machine". Bohnenberger's machine was based on a rotating massive sphere. In 1832, American Walter R. Johnson developed a similar device that was based on a rotating disc. The French mathematician Pierre-Simon Laplace, working at the École Polytechnique in Paris, recommended the machine for use as a teaching aid, and thus it came to the attention of Léon Foucault. In 1852, Foucault used it in an experiment involving the rotation of the Earth. It was Foucault who gave the device its modern name, in an experiment to see (Greek ''skopeein'', to see) the Earth's rotation (Greek ''gyros'', circle or rotation), which was visible in the 8 to 10 minutes before friction slowed the spinning rotor. In the 1860s, the advent of electric motors made it possible for a gyroscope to spin indefinitely; this led to the first prototype heading indicators, and a rather more complicated device, the gyrocompass. The first functional gyrocompass was patented in 1904 by German inventor Hermann Anschütz-Kaempfe. American Elmer Sperry followed with his own design later that year, and other nations soon realized the military importance of the invention—in an age in which naval prowess was the most significant measure of military power—and created their own gyroscope industries. The Sperry Gyroscope Company quickly expanded to provide aircraft and naval stabilizers as well, and other gyroscope developers followed suit. In 1917, the Chandler Company of Indianapolis, created the "Chandler gyroscope", a toy gyroscope with a pull string and pedestal. Chandler continued to produce the toy until the company was purchased by TEDCO inc. in 1982. The chandler toy is still produced by TEDCO today. In the first several decades of the 20th century, other inventors attempted (unsuccessfully) to use gyroscopes as the basis for early black box navigational systems by creating a stable platform from which accurate acceleration measurements could be performed (in order to bypass the need for star sightings to calculate position). Similar principles were later employed in the development of inertial navigation systems for ballistic missiles. During World War II, the gyroscope became the prime component for aircraft and anti-aircraft gun sights. After the war, the race to miniaturize gyroscopes for guided missiles and weapons navigation systems resulted in the development and manufacturing of so-called midget gyroscopes that weighed less than and had a diameter of approximately . Some of these miniaturized gyroscopes could reach a speed of 24,000 revolutions per minute in less than 10 seconds. Gyroscopes continue to be an engineering challenge. For example, the axle bearings have to be extremely accurate. A small amount of friction is deliberately introduced to the bearings, since otherwise an accuracy of better than of an inch (2.5 nm) would be required. Three-axis MEMS-based gyroscopes are also being used in portable electronic devices such as tablets, smartphones, and smartwatches. This adds to the 3-axis acceleration sensing ability available on previous generations of devices. Together these sensors provide 6 component motion sensing; accelerometers for X,Y, and Z movement, and gyroscopes for measuring the extent and rate of rotation in space (roll, pitch and yaw). Some devices additionally incorporate a magnetometer to provide absolute angular measurements relative to the Earth's magnetic field. Newer MEMS-based inertial measurement units incorporate up to all nine axes of sensing in a single integrated circuit package, providing inexpensive and widely available motion sensing.

All spinning objects have gyroscopic properties. The main properties that an object can experience in any gyroscopic motion are Rigidity in Space and Precession.

Rigidity in space describes the principle that a gyroscope remains in the fixed position on the plane in which it is spinning, unaffected by the Earth's rotation. For example, a bike wheel.
Source

Gyroscopic Precession is torque induced. A physical phenomenon caused by an applied torque on a spinning object, resulting in the seemingly impossible dynamic occurrences. For example, a spinning top. 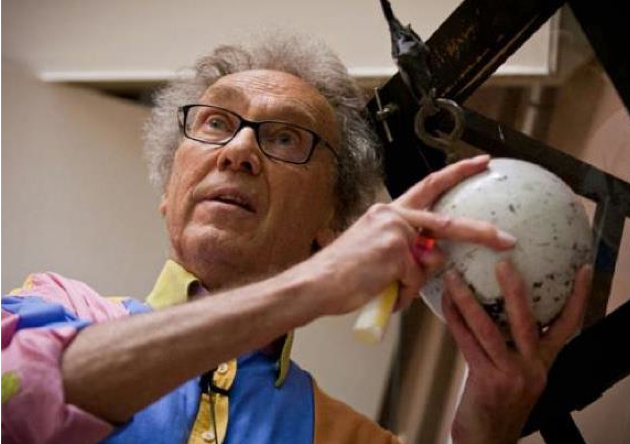 A demonstration was done by Walter Lewin during one of his lectures a
MIT
involving a motor, a vertically fastened rope, and a bike wheel. This presentation is often recreated to display the properties of this gyroscopic behavior. The bike wheel is spun using the motor when the wheel is attached to the rope, the wheel maintains a perpendicular angle in respect to the rope with a continuous rotation in the direction of the wheel's spin. As the bike wheel begins to slow down, the bike wheel's perpendicular angle is lost, and its rotational velocity decreases until the wheel falls at rest, with the bike wheel's rod in line with the attached rope. External Links
Lecture