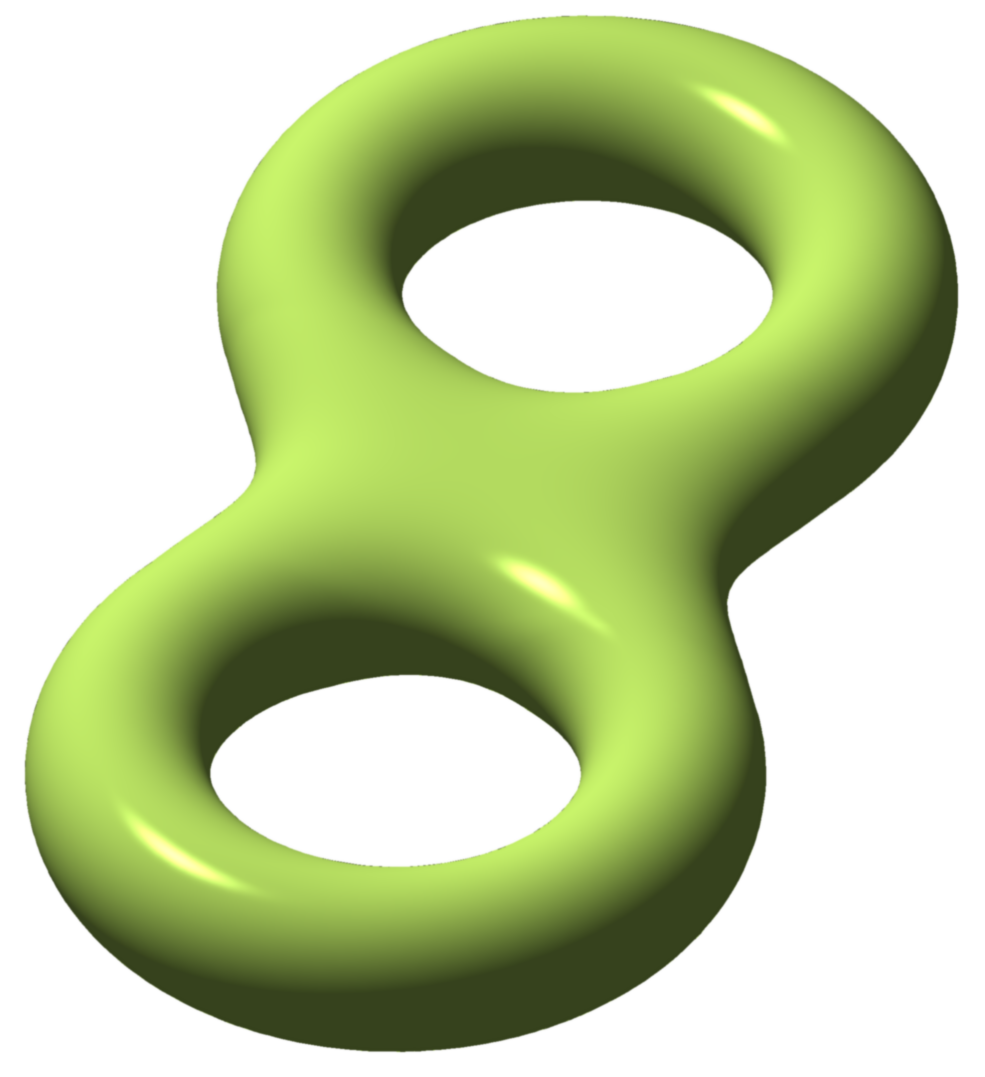 In mathematics, genus (plural genera) has a few different, but closely related, meanings. The most common concept, the genus of an (orientable) surface, is the number of "holes" it has, so that a sphere has genus 0 and a torus has genus 1.

The genus of a connected, orientable surface is an integer representing the maximum number of cuttings along non-intersecting closed simple curves without rendering the resultant manifold disconnected. It is equal to the number of handles on it. Alternatively, it can be defined in terms of the Euler characteristic ''χ'', via the relationship ''χ'' = 2 − 2''g'' for closed surfaces, where ''g'' is the genus. For surfaces with ''b'' boundary components, the equation reads ''χ'' = 2 − 2''g'' − ''b''. In layman's terms, it's the number of "holes" an object has ("holes" interpreted in the sense of doughnut holes; a hollow sphere would be considered as having zero holes in this sense). A doughnut, or torus, has 1 such hole, while a sphere has 0. The green surface pictured above has 2 holes of the relevant sort. For instance: * The sphere S2 and a disc both have genus zero. * A torus has genus one, as does the surface of a coffee mug with a handle. This is the source of the joke "topologists are people who can't tell their donut from their coffee mug." An explicit construction of surfaces of genus ''g'' is given in the article on the fundamental polygon. In simpler terms, the value of an orientable surface's genus is equal to the number of "holes" it has.

The genus of a 3-dimensional handlebody is an integer representing the maximum number of cuttings along embedded disks without rendering the resultant manifold disconnected. It is equal to the number of handles on it. For instance: * A ball has genus zero. * A solid torus ''D''2 × ''S''1 has genus one.

There are two related definitions of genus of any projective algebraic scheme ''X'': the arithmetic genus and the geometric genus. When ''X'' is an algebraic curve with field of definition the complex numbers, and if ''X'' has no singular points, then these definitions agree and coincide with the topological definition applied to the Riemann surface of ''X'' (its manifold of complex points). For example, the definition of elliptic curve from algebraic geometry is ''connected non-singular projective curve of genus 1 with a given rational point on it''. By the Riemann-Roch theorem, an irreducible plane curve of degree given by the vanishing locus of a section has geometric genus : where ''s'' is the number of singularities when properly counted.

Genus can be also calculated for the graph spanned by the net of chemical interactions in nucleic acids or proteins. In particular, one may study the growth of the genus along the chain. Such a function (called the genus trace) shows the topological complexity and domain structure of biomolecules.