Fused quartz or fused silica is glass consisting of silica in amorphous (non-crystalline) form. It differs from traditional glasses in containing no other ingredients, which are typically added to glass to lower the melt temperature. Fused silica, therefore, has high working and melting temperatures. Although the terms fused quartz and fused silica are used interchangeably, the optical and thermal properties of fused silica are superior to those of fused quartz and other types of glass due to its purity. For these reasons, it finds use in situations such as semiconductor fabrication and laboratory equipment. It transmits ultraviolet better than other glasses, so is used to make lenses and optics for the ultraviolet spectrum. The low coefficient of thermal expansion of fused quartz makes it a useful material for precision mirror substrates.

Melting is effected at approximately 1650 °C (3000 °F) using either an electrically heated furnace (electrically fused) or a gas/oxygen-fuelled furnace (flame-fused). Fused silica can be made from almost any silicon-rich chemical precursor, usually using a continuous process which involves flame oxidation of volatile silicon compounds to silicon dioxide, and thermal fusion of the resulting dust (although alternative processes are used). This results in a transparent glass with an ultra-high purity and improved optical transmission in the deep ultraviolet. One common method involves adding silicon tetrachloride to a hydrogen–oxygen flame.

Fused quartz is normally transparent. The material can, however, become translucent if small air bubbles are allowed to be trapped within. The water content (and therefore infrared transmission of fused quartz and fused silica) is determined by the manufacturing process. Flame-fused material always has a higher water content due to the combination of the hydrocarbons and oxygen fuelling the furnace, forming hydroxyl Hgroups within the material. An IR grade material typically has an Hcontent below 10 ppm.

Most of the applications of fused silica exploit its wide transparency range, which extends from the UV to the near IR. Fused silica is the key starting material for optical fiber, used for telecommunications. Because of its strength and high melting point (compared to ordinary glass), fused silica is used as an envelope for halogen lamps and high-intensity discharge lamps, which must operate at a high envelope temperature to achieve their combination of high brightness and long life. Vacuum tubes with silica envelopes allowed for radiation cooling by incandescent anodes. Because of its strength, fused silica was used in deep diving vessels such as the bathysphere and benthoscope. Fused silica is also used to form the windows of manned spacecraft, including the Space Shuttle and International Space Station. The combination of strength, thermal stability, and UV transparency makes it an excellent substrate for projection masks for photolithography. 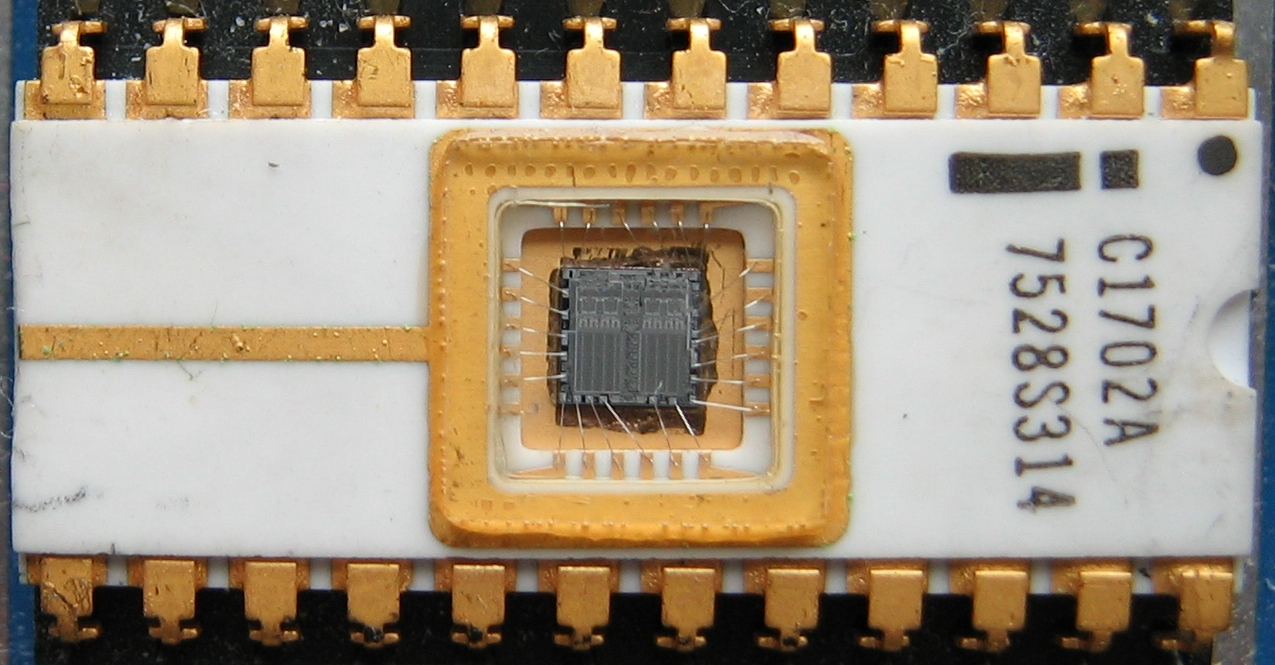 Its UV transparency also finds uses in the semiconductor industry; an EPROM, or erasable programmable read only memory, is a type of memory chip that retains its data when its power supply is switched off, but which can be erased by exposure to strong ultraviolet light. EPROMs are recognizable by the transparent fused quartz window which sits on top of the package, through which the silicon chip is visible, and which permits exposure to UV light during erasing. Due to the thermal stability and composition, it is used in 5D optical data storage and in semiconductor fabrication furnaces. Fused quartz has nearly ideal properties for fabricating first surface mirrors such as those used in telescopes. The material behaves in a predictable way and allows the optical fabricator to put a very smooth polish onto the surface and produce the desired figure with fewer testing iterations. In some instances, a high-purity UV grade of fused quartz has been used to make several of the individual uncoated lens elements of special-purpose lenses including the Zeiss 105 mm f/4.3 UV Sonnar, a lens formerly made for the Hasselblad camera, and the Nikon UV-Nikkor 105 mm f/4.5 (presently sold as the Nikon PF10545MF-UV) lens. These lenses are used for UV photography, as the quartz glass has a lower extinction rate than lenses made with more common flint or crown glass formulas. Fused quartz can be metallised and etched for use as a substrate for high-precision microwave circuits, the thermal stability making it a good choice for narrowband filters and similar demanding applications. The lower dielectric constant than alumina allows higher impedance tracks or thinner substrates. Fused quartz is also the material used for modern glass instruments such as the glass harp and the verrophone, and is also used for new builds of the historical glass harmonica. Here, the superior strength and structure of fused quartz gives it a greater dynamic range and a clearer sound than the historically used lead crystal.

Fused silica as an industrial raw material is used to make various refractory shapes such as crucibles, trays, shrouds, and rollers for many high-temperature thermal processes including steelmaking, investment casting, and glass manufacture. Refractory shapes made from fused silica have excellent thermal shock resistance and are chemically inert to most elements and compounds, including virtually all acids, regardless of concentration, except hydrofluoric acid, which is very reactive even in fairly low concentrations. Translucent fused-silica tubes are commonly used to sheathe electric elements in room heaters, industrial furnaces, and other similar applications. Owing to its low mechanical damping at ordinary temperatures, it is used for high-Q resonators, in particular, for wine-glass resonator of hemispherical resonator gyro. Quartz glassware is occasionally used in chemistry laboratories when standard borosilicate glass cannot withstand high temperatures or when high UV transmission is required. The cost of production is significantly higher, limiting its use; it is usually found as a single basic element, such as a tube in a furnace, or as a flask, the elements in direct exposure to the heat.

The extremely low coefficient of thermal expansion, about 5.5 ⋅ 10−7/K (20...320 °C), accounts for its remarkable ability to undergo large, rapid temperature changes without cracking (see thermal shock). Fused quartz is prone to phosphorescence and "solarisation" (purplish discoloration) under intense UV illumination, as is often seen in flashtubes. "UV grade" synthetic fused silica (sold under various tradenames including "HPFS", "Spectrosil", and "Suprasil") has a very low metallic impurity content making it transparent deeper into the ultraviolet. An optic with a thickness of 1 cm has a transmittance around 50% at a wavelength of 170 nm, which drops to only a few percent at 160 nm. However, its infrared transmission is limited by strong water absorptions at 2.2 μm and 2.7 μm. "Infrared grade" fused quartz (tradenames "Infrasil", "Vitreosil IR", and others), which is electrically fused, has a greater presence of metallic impurities, limiting its UV transmittance wavelength to around 250 nm, but a much lower water content, leading to excellent infrared transmission up to 3.6 μm wavelength. All grades of transparent fused quartz/fused silica have nearly identical mechanical properties. 250px| Phosphorescence of the quartz ignition tube of an air-gap flash

The optical dispersion of fused silica can be approximated by the following Sellmeier equation: : where the wavelength is measured in micrometers. This equation is valid between 0.21 and 3.71 µm and at 20 °C.