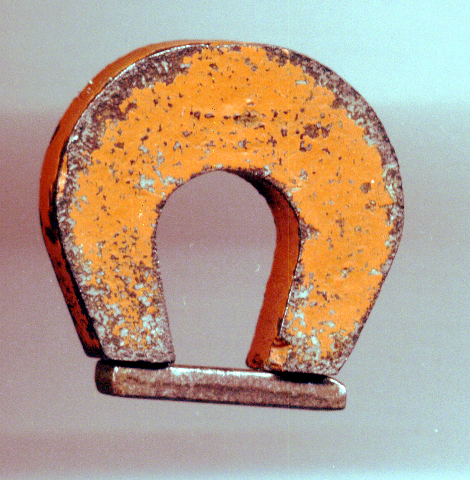 Ferromagnetism is the basic mechanism by which certain materials (such as iron) form permanent magnets, or are attracted to magnets. In physics, several different types of magnetism are distinguished. Ferromagnetism (along with the similar effect ferrimagnetism) is the strongest type and is responsible for the common phenomenon of magnetism in magnets encountered in everyday life. Substances respond weakly to magnetic fields with three other types of magnetism—paramagnetism, diamagnetism, and antiferromagnetism—but the forces are usually so weak that they can be detected only by sensitive instruments in a laboratory. An everyday example of ferromagnetism is a refrigerator magnet used to hold notes on a refrigerator door. The attraction between a magnet and ferromagnetic material is "the quality of magnetism first apparent to the ancient world, and to us today". Permanent magnets (materials that can be magnetized by an external magnetic field and remain magnetized after the external field is removed) are either ferromagnetic or ferrimagnetic, as are the materials that are noticeably attracted to them. Only a few substances are ferromagnetic. The common ones are iron, cobalt, nickel and most of their alloys, and some compounds of rare earth metals. Ferromagnetism is very important in industry and modern technology, and is the basis for many electrical and electromechanical devices such as electromagnets, electric motors, generators, transformers, and magnetic storage such as tape recorders, and hard disks, and nondestructive testing of ferrous materials. Ferromagnetic materials can be divided into magnetically "soft" materials like annealed iron, which can be magnetized but do not tend to stay magnetized, and magnetically "hard" materials, which do. Permanent magnets are made from "hard" ferromagnetic materials such as alnico, and ferrimagnetic materials such as ferrite that are subjected to special processing in a strong magnetic field during manufacture to align their internal microcrystalline structure, making them very hard to demagnetize. To demagnetize a saturated magnet, a certain magnetic field must be applied, and this threshold depends on coercivity of the respective material. "Hard" materials have high coercivity, whereas "soft" materials have low coercivity. The overall strength of a magnet is measured by its magnetic moment or, alternatively, the total magnetic flux it produces. The local strength of magnetism in a material is measured by its magnetization.

History and distinction from ferrimagnetism

Ferromagnetism is an unusual property that occurs in only a few substances. The common ones are the transition metals iron, nickel, cobalt and their alloys, and alloys of rare earth metals. It is a property not just of the chemical make-up of a material, but of its crystalline structure and microstructure. There are ferromagnetic metal alloys whose constituents are not themselves ferromagnetic, called Heusler alloys, named after Fritz Heusler. Conversely there are non-magnetic alloys, such as types of stainless steel, composed almost exclusively of ferromagnetic metals. Amorphous (non-crystalline) ferromagnetic metallic alloys can be made by very rapid quenching (cooling) of a liquid alloy. These have the advantage that their properties are nearly isotropic (not aligned along a crystal axis); this results in low coercivity, low hysteresis loss, high permeability, and high electrical resistivity. One such typical material is a transition metal-metalloid alloy, made from about 80% transition metal (usually Fe, Co, or Ni) and a metalloid component (B, C, Si, P, or Al) that lowers the melting point. A relatively new class of exceptionally strong ferromagnetic materials are the rare-earth magnets. They contain lanthanide elements that are known for their ability to carry large magnetic moments in well-localized f-orbitals. The table lists a selection of ferromagnetic and ferrimagnetic compounds, along with the temperature above which they cease to exhibit spontaneous magnetization (see Curie temperature).

Most ferromagnetic materials are metals, since the conducting electrons are often responsible for mediating the ferromagnetic interactions. It is therefore a challenge to develop ferromagnetic insulators, especially multiferroic materials, which are both ferromagnetic and ferroelectric. A number of actinide compounds are ferromagnets at room temperature or exhibit ferromagnetism upon cooling. PuP is a paramagnet with cubic symmetry at room temperature, but which undergoes a structural transition into a tetragonal state with ferromagnetic order when cooled below its TC = 125 K. In its ferromagnetic state, PuP's easy axis is in the <100> direction. In NpFe2 the easy axis is <111>. Above , NpFe2 is also paramagnetic and cubic. Cooling below the Curie temperature produces a rhombohedral distortion wherein the rhombohedral angle changes from 60° (cubic phase) to 60.53°. An alternate description of this distortion is to consider the length ''c'' along the unique trigonal axis (after the distortion has begun) and ''a'' as the distance in the plane perpendicular to ''c''. In the cubic phase this reduces to . Below the Curie temperature : which is the largest strain in any actinide compound. NpNi2 undergoes a similar lattice distortion below , with a strain of (43 ± 5) × 10−4.