The elk (''Cervus canadensis''), also known as the wapiti, is one of the largest species within the deer family, Cervidae, and one of the largest terrestrial mammals in North America, as well as Central and East Asia. It is often confused with the larger ''Alces alces'', which is called moose in North America, but called elk in British English, and related names in other European languages (German ''Elch'', Swedish ''älg'', French ''élan''). The name "wapiti" is used in Europe for ''Cervus canadensis''. It originates from the Shawnee and Cree word waapiti, meaning "white rump". Elk range in forest and forest-edge habitat, feeding on grasses, plants, leaves, and bark. Male elk have large antlers which they shed each year. Males also engage in ritualized mating behaviors during the rut, including posturing, antler wrestling (sparring), and ''bugling'', a loud series of vocalizations that establishes dominance over other males and attracts females. Although it is currently native to North America and eastern Asia, it had a much wider distribution in the past. Populations were present across Eurasia into Western Europe during the Late Pleistocene and survived into the early Holocene in southern Sweden and the Alps. The elk has adapted well in countries where it has been introduced, including Argentina and New Zealand. Its adaptability may in fact threaten endemic species and the ecosystems into which it has been introduced. Elk are susceptible to a number of infectious diseases, some of which can be transmitted to livestock. Efforts to eliminate infectious diseases from elk populations, largely by vaccination, have had mixed success. Some cultures revere the elk as having spiritual significance. In parts of Asia, antlers and their velvet are used in traditional medicines. Elk are hunted as a game species. Their meat is leaner and higher in protein than beef or chicken. Elk were long believed to belong to a subspecies of the European red deer (''Cervus elaphus''), but evidence from many mitochondrial DNA genetic studies beginning in 1998 shows that the two are distinct species. Key morphological differences that distinguish ''C. canadensis'' from ''C. elaphus'' are the former's wider rump patch and paler-hued antlers.

By the 17th century, ''Alces alces'' (called "elk" in Europe) had long been extinct in the British Isles, and the meaning of the word "elk" to English-speakers became rather vague, and "elk" had acquired a meaning similar to "large deer". English-speaking people arriving in North America during the European colonization of the Americas lacked familiarity with ''Alces alces'' on either side of the Atlantic Ocean, but familiar with the smaller ''Cervus elaphus'' (red deer) of the British Isles, thought that the larger North American animal ''Cervus canadensis'' resembled the even larger American (and Scandinavian) animal ''Alces alces'' ow called "moose" in North America and thus gave to ''Cervus canadensis'' the name "elk", which since antiquity had referred in Europe to ''Alces alces'', an animal known in Europe but unfamiliar in Britain. The name ''wapiti'' is from the Shawnee and Cree word ''waapiti'', meaning "white rump". There is a subspecies of wapiti in Mongolia called the Altai wapiti (''Cervus canadensis sibiricus''), also known as the Altai maral. The Asian subspecies are sometimes referred to as the ''maral'', but this name applies primarily to the Caspian red deer (''Cervus elaphus maral''), a subspecies of red deer. According to the ''Oxford English Dictionary'', the etymology of the word "elk" is "of obscure history". In Classical Antiquity, the European ''Alces alces'' was known as and , words probably borrowed from a Germanic language or another language of northern Europe. By the 8th century, during the Early Middle Ages, the moose was known as derived from the Proto-Germanic: ''*elho-'', ''*elhon-'' and possibly connected with the . Later, the species became known in Middle English as ''elk'', ''elcke'', or ''elke'', appearing in the Latinized form ''alke'', with the spelling ''alce'' borrowed directly from . Noting that ''elk'' "is not the normal phonetic representative" of the Old English ''elch'', the ''Oxford English Dictionary'' derives ''elk'' from , itself from . The American ''Cervus canadensis'' was recognized as a relative of the red deer (''Cervus elaphus''), of Europe, and so ''Cervus canadensis'' was referred to as "red deer". Richard Hakluyt, in his 1584 ''Discourse Concerning Western Planting'', mentioned the continent's plentiful red deer (). Similarly, John Smith's 1616 ''A Description of New England'' referred to red deer. Sir William Talbot's 1672 English translation of John Lederer's Latin ''Discoveries'' likewise called the species "Red Deer", but noted in parentheses that they were "for their unusual largeness improperly termed Elks by ignorant people". Both Thomas Jefferson's 1785 ''Notes on the State of Virginia'' and David Bailie Warden's 1816 ''Statistical, Political, and Historical Account of the United States'' used "red deer" to refer to ''Cervus canadensis''. 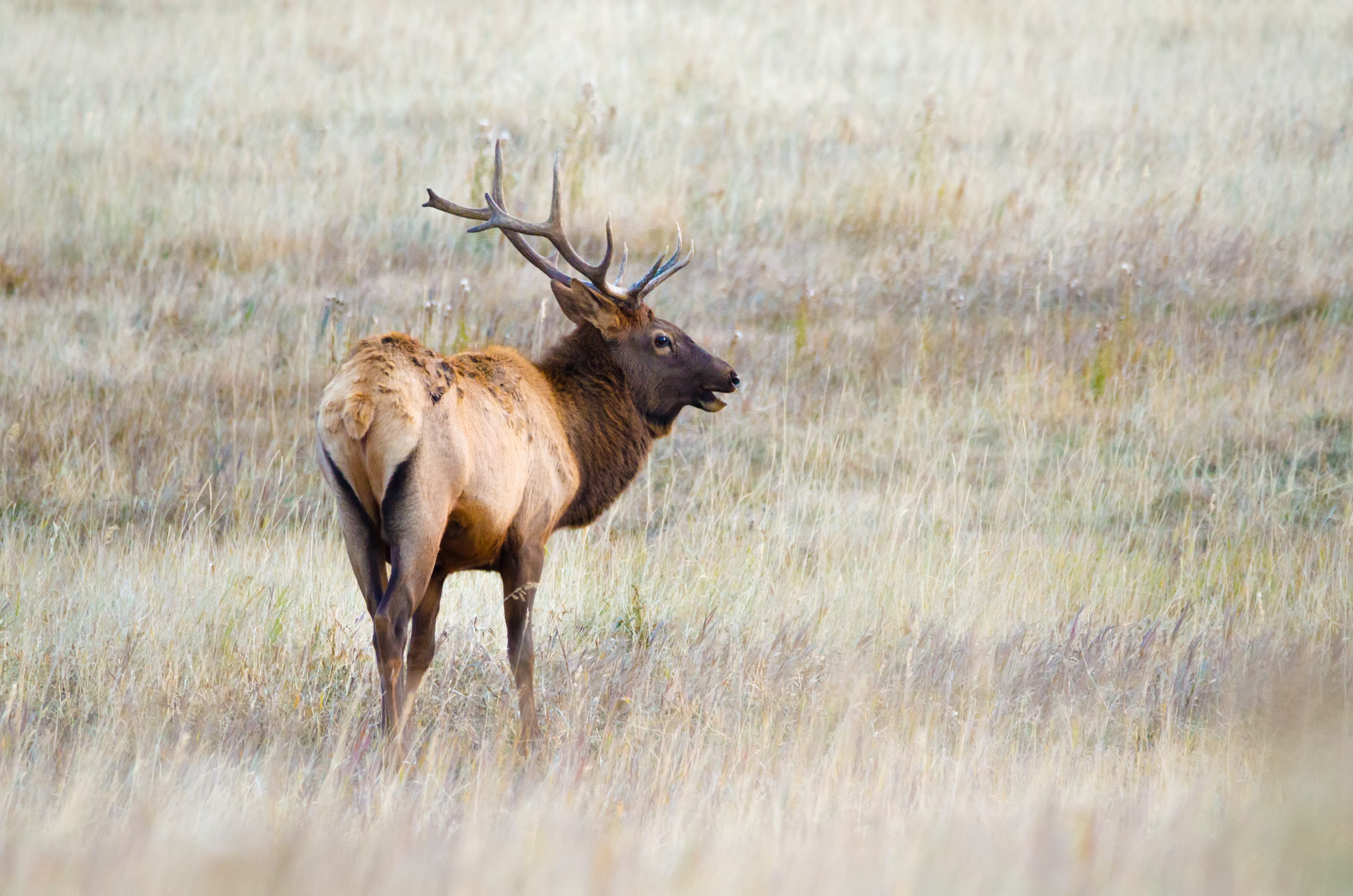 Members of the genus ''Cervus'' (and hence early relatives or possible ancestors of the elk) first appear in the fossil record 25 million years ago, during the Oligocene in Eurasia, but do not appear in the North American fossil record until the early Miocene. The extinct Irish elk (''Megaloceros'') was not a member of the genus ''Cervus'' but rather the largest member of the wider deer family (Cervidae) known from the fossil record. Until recently, red deer and elk were considered to be one species, ''Cervus elaphus'',