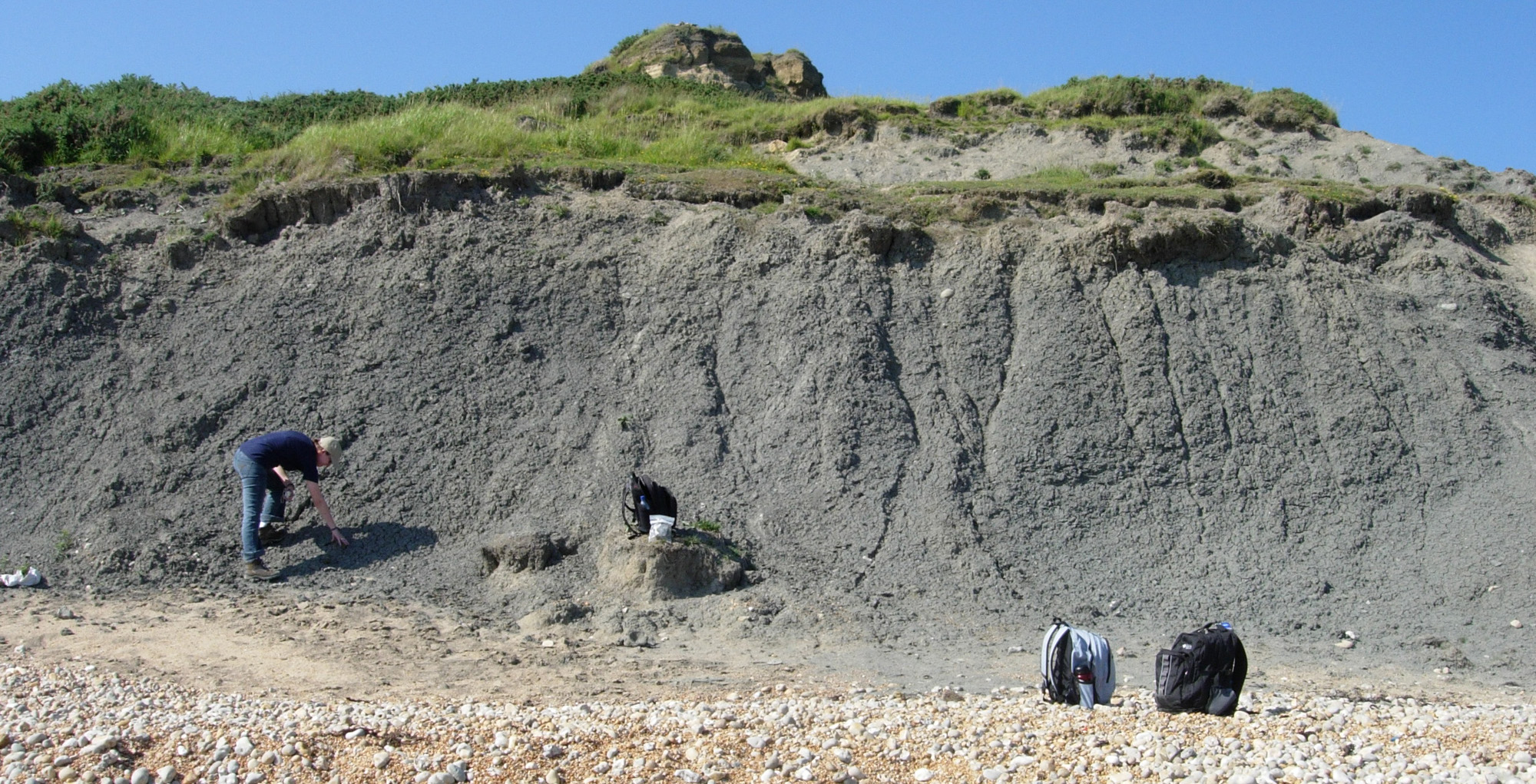 Clay minerals are hydrous aluminium phyllosilicates, sometimes with variable amounts of iron, magnesium, alkali metals, alkaline earths, and other cations found on or near some planetary surfaces. Clay minerals form in the presence of water and have been important to life, and many theories of abiogenesis involve them. They are important constituents of soils, and have been useful to humans since ancient times in agriculture and manufacturing.

Clays form flat hexagonal sheets similar to the micas. Clay minerals are common weathering products (including weathering of feldspar) and low-temperature hydrothermal alteration products. Clay minerals are very common in soils, in fine-grained sedimentary rocks such as shale, mudstone, and siltstone and in fine-grained metamorphic slate and phyllite. Clay minerals are usually (but not necessarily) ultrafine-grained (normally considered to be less than 2 micrometres in size on standard particle size classifications) and so may require special analytical techniques for their identification and study. These include X-ray diffraction, electron diffraction methods, various spectroscopic methods such as Mössbauer spectroscopy, infrared spectroscopy, Raman spectroscopy, and SEM-EDS or automated mineralogy processes. These methods can be augmented by polarized light microscopy, a traditional technique establishing fundamental occurrences or petrologic relationships.

Given the requirement of water, clay minerals are relatively rare in the Solar System, though they occur extensively on Earth where water has interacted with other minerals and organic matter. Clay minerals have been detected at several locations on Mars, including Echus Chasma, Mawrth Vallis, the Memnonia quadrangle and the Elysium quadrangle. Spectrography has confirmed their presence on asteroids including the dwarf planet Ceres and Tempel 1, as well as Jupiter's moon Europa.

Clay minerals can be classified as 1:1 or 2:1, this originates because they are fundamentally built of tetrahedral silicate sheets and octahedral hydroxide sheets, as described in the structure section below. A 1:1 clay would consist of one tetrahedral sheet and one octahedral sheet, and examples would be kaolinite and serpentinite. A 2:1 clay consists of an octahedral sheet sandwiched between two tetrahedral sheets, and examples are talc, vermiculite, and montmorillonite. Clay minerals include the following groups: * Kaolin group which includes the minerals kaolinite, dickite, halloysite, and nacrite (polymorphs of ). ** Some sources include the kaolinite-serpentine group due to structural similarities. * Smectite group which includes dioctahedral smectites, such as montmorillonite, nontronite and beidellite, and trioctahedral smectites, such as saponite. In 2013, analytical tests by the Curiosity rover found results consistent with the presence of ''smectite clay minerals'' on the planet Mars. * Illite group which includes the clay-micas. Illite is the only common mineral. * Chlorite group includes a wide variety of similar minerals with considerable chemical variation. * Other 2:1 clay types exist such as palygorskite (also known as attapulgite) and sepiolite, clays with long water channels internal to their structure. Mixed blue layer clay variations exist for most of the above groups. Ordering is described as a random or regular order and is further described by the term reichweite, which is German for range or reach. Literature articles will refer to an R1 ordered illite-smectite, for example. This type would be ordered in an ISIS fashion. R0 on the other hand describes random ordering, and other advanced ordering types are also found (R3, etc.). Mixed layer clay minerals which are perfect R1 types often get their own names. R1 ordered chlorite-smectite is known as corrensite, R1 illite-smectite is rectorite.

The crystallographic structure of clay minerals became better understood in the 1930s with advancements in the x-ray diffraction (XRD) technique indispensable to decipher their crystal lattice. Standardization in terminology arose during this period as well with special attention given to similar words that resulted in confusion such as sheet and plane.

As most of the clays are made from minerals, they are highly biocompatible and have interesting biological properties. Due to disc-shaped and charged surfaces, clay interacts with a range of macromolecules such as drugs, protein, polymers, DNA, etc. Some of the applications of clays include drug delivery, tissue engineering, and bioprinting.

Clay minerals can be incorporated in lime-metakaolin mortars to improve mechanical properties. Electrochemical separation helps to obtain modified saponite-containing products with high smectite-group minerals concentrations, lower mineral particles size, more compact structure, and greater surface area. These characteristics open possibilities for the manufacture of high-quality ceramics and heavy-metal sorbents from saponite-containing products. Furthermore, tail grinding occurs during the preparation of the raw material for ceramics; this waste reprocessing is of high importance for the use of clay pulp as a neutralizing agent, as fine particles are required for the reaction. Experiments on the Histosol deacidification with the alkaline clay slurry demonstrated that neutralization with the average pH level of 7.1 is reached at 30% of the pulp added and an experimental site with perennial grasses proved the efficacy of the technique. Moreover, the reclamation of disturbed lands is an integral part of the social and environmental responsibility of the mining company and this scenario addresses the community necessities at both local and regional levels.