The cheetah (''Acinonyx jubatus'') is a large cat native to Africa and central Iran. It is the fastest land animal, estimated to be capable of running at with the fastest reliably recorded speeds being , and as such has several adaptations for speed, including a light build, long thin legs and a long tail. It typically reaches at the shoulder, and the head-and-body length is between . Adults weigh between . Its head is small, rounded, and has a short snout and black tear-like facial streaks. The coat is typically tawny to creamy white or pale buff and is mostly covered with evenly spaced, solid black spots. Four subspecies are recognised. The cheetah lives in three main social groups, females and their cubs, male "coalitions" and solitary males. While females lead a nomadic life searching for prey in large home ranges, males are more sedentary and may instead establish much smaller territories in areas with plentiful prey and access to females. The cheetah is active mainly during the day, with peaks during dawn and dusk. It feeds on small- to medium-sized prey, mostly weighing under , and prefers medium-sized ungulates such as impala, springbok and Thomson's gazelles. The cheetah typically stalks its prey to within , charges towards it, trips it during the chase and bites its throat to suffocate it to death. It breeds throughout the year. After a gestation of nearly three months, a litter of typically three or four cubs is born. Cheetah cubs are highly vulnerable to predation by other large carnivores such as hyenas and lions. They are weaned at around four months and are independent by around 20 months of age. The cheetah occurs in a variety of habitats such as savannahs in the Serengeti, arid mountain ranges in the Sahara and hilly desert terrain in Iran. The cheetah is threatened by several factors such as habitat loss, conflict with humans, poaching and high susceptibility to diseases. Historically ranging throughout most of Sub-Saharan Africa and extending eastward into the Middle East and to central India, the cheetah is now distributed mainly in small, fragmented populations in central Iran and southern, eastern and northwestern Africa. In 2016, the global cheetah population was estimated at around 7,100 individuals in the wild; it is listed as Vulnerable on the IUCN Red List. In the past, cheetahs used to be tamed and trained for hunting ungulates. They have been widely depicted in art, literature, advertising, and animation.

The vernacular name "cheetah" is derived from Hindustani ur|چیتا and hi|चीता (). This in turn comes from sa|चित्रय () meaning 'variegated', 'adorned' or 'painted'. In the past, the cheetah was often called "hunting leopard" because they could be tamed and used for coursing. The generic name ''Acinonyx'' probably derives from the combination of two Greek words: () meaning 'unmoved' or 'motionless', and () meaning 'nail' or 'hoof'. A rough translation is "immobile nails", a reference to the cheetah's limited ability to retract its claws. A similar meaning can be obtained by the combination of the Greek prefix ''a–'' (implying a lack of) and () meaning 'to move' or 'to set in motion'. The specific name is Latin for 'crested, having a mane'. A few old generic names such as ''Cynailurus'' and ''Cynofelis'' allude to the similarities between the cheetah and canids. 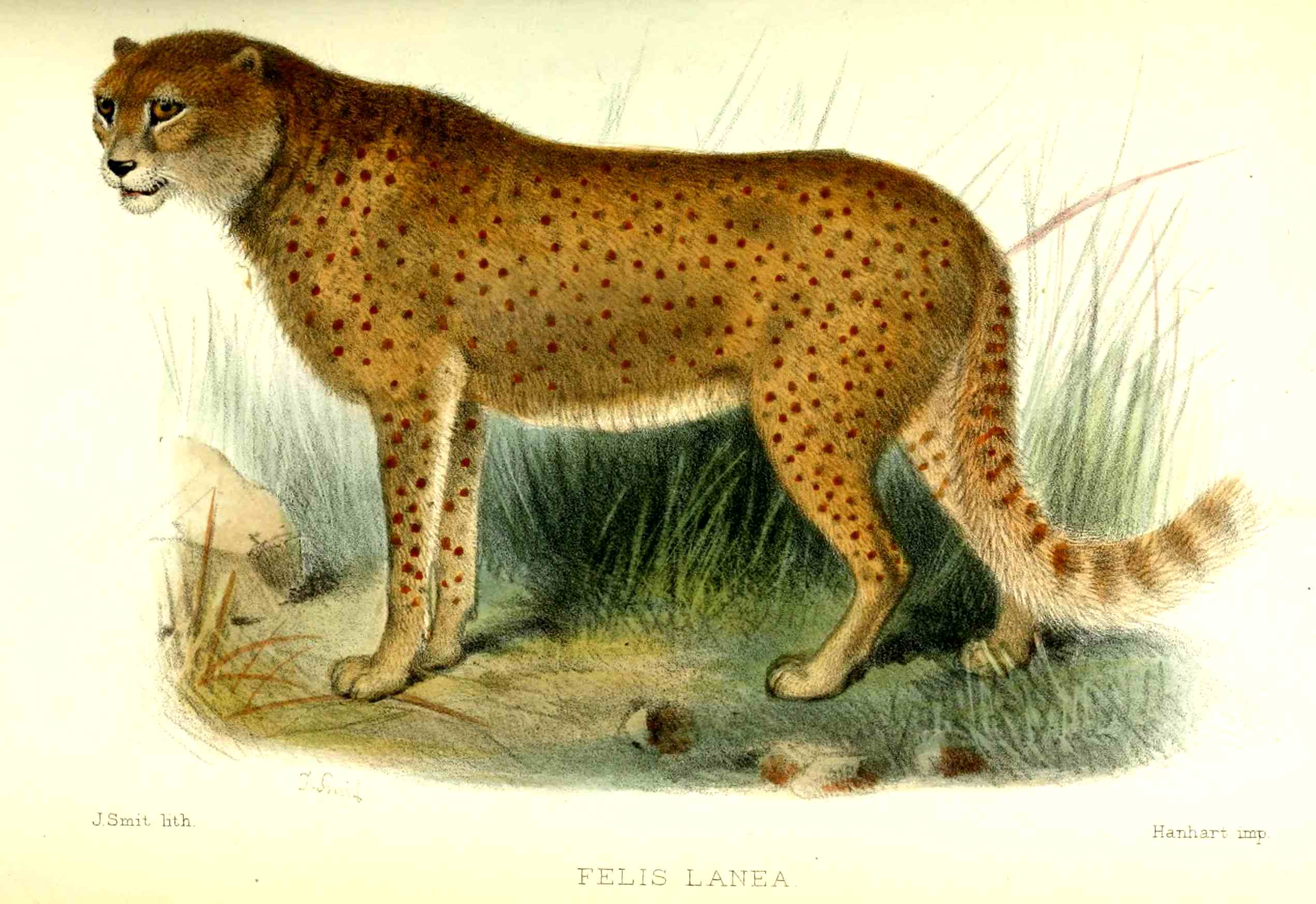 In 1777, Johann Christian Daniel von Schreber described the cheetah based on a skin from the Cape of Good Hope and gave it the scientific name ''Felis jubatus''. Joshua Brookes proposed the generic name ''Acinonyx'' in 1828. In 1917, Reginald Innes Pocock placed the cheetah in a subfamily of its own, Acinonychinae, given its striking morphological resemblance to the greyhound as well as significant deviation from typical felid features; the cheetah was classified in Felinae in later taxonomic revisions.