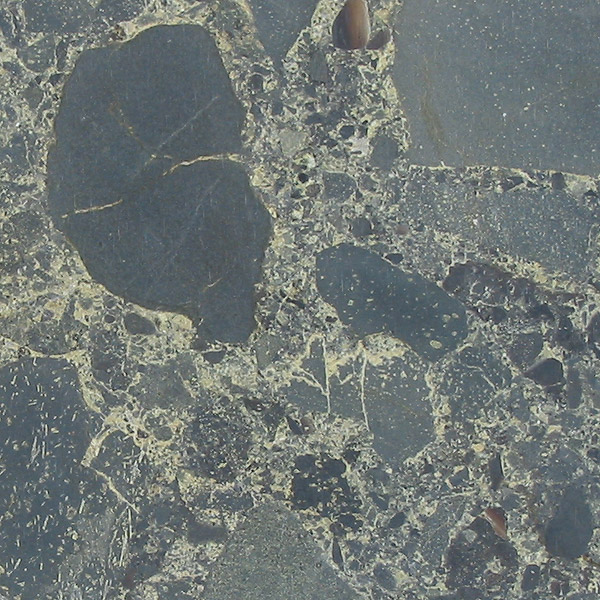 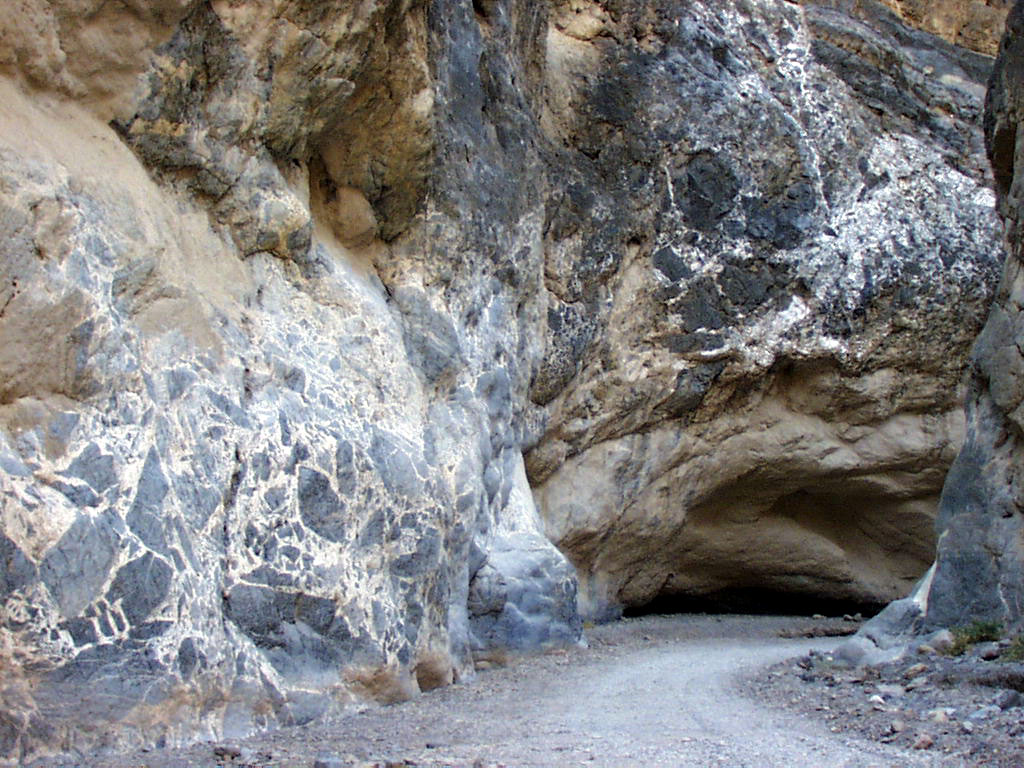 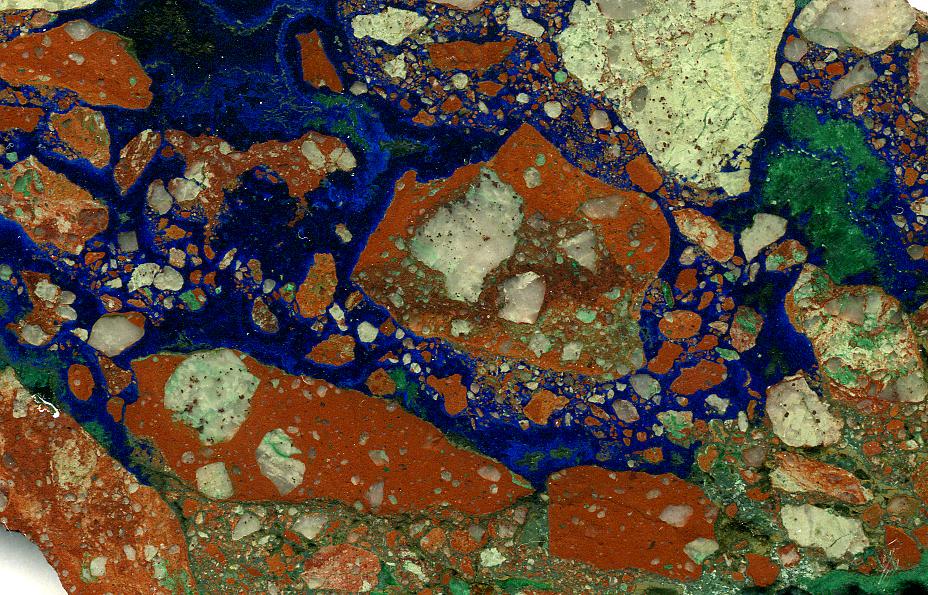 Breccia ( or ) is a rock composed of broken fragments of minerals or rock cemented together by a fine-grained matrix that can be similar to or different from the composition of the fragments. The word has its origins in the Italian language, in which it means "rubble". A breccia may have a variety of different origins, as indicated by the named types including sedimentary breccia, tectonic breccia, igneous breccia, impact breccia, and hydrothermal breccia. A megabreccia is a breccia composed of very large rock fragments, sometimes kilometers across, which can be formed by landslides, impact events, or caldera collapse.

Fault breccia results from the grinding action of two fault blocks as they slide past each other. Subsequent cementation of these broken fragments may occur by means of the introduction of mineral matter in groundwater.

Volcanic pyroclastic rocks are formed by explosive eruption of lava and any rocks which are entrained within the eruptive column. This may include rocks plucked off the wall of the magma conduit, or physically picked up by the ensuing pyroclastic surge. Lavas, especially rhyolite and dacite flows, tend to form clastic volcanic rocks by a process known as ''autobrecciation''. This occurs when the thick, nearly solid lava breaks up into blocks and these blocks are then reincorporated into the lava flow again and mixed in with the remaining liquid magma. The resulting breccia is uniform in rock type and chemical composition. Within the volcanic conduits of explosive volcanoes the volcanic breccia environment merges into the intrusive breccia environment. There the upwelling lava tends to solidify during quiescent intervals only to be shattered by ensuing eruptions. This produces an ''alloclastic'' volcanic breccia.

Clastic rocks are also commonly found in shallow subvolcanic intrusions such as porphyry stocks, granites and kimberlite pipes, where they are transitional with volcanic breccias. Intrusive rocks can become brecciated in appearance by multiple stages of intrusion, especially if fresh magma is intruded into partly consolidated or solidified magma. This may be seen in many granite intrusions where later aplite veins form a late-stage stockwork through earlier phases of the granite mass. When particularly intense, the rock may appear as a chaotic breccia. Clastic rocks in mafic and ultramafic intrusions have been found and form via several processes: * consumption and melt-mingling with wall rocks, where the felsic wall rocks are softened and gradually invaded by the hotter ultramafic intrusion (termed ''taxitic texture'' by Russian geologists); * accumulation of rocks which fall through the magma chamber from the roof, forming chaotic remnants; * autobrecciation of partly consolidated cumulate by fresh magma injections or by violent disturbances within the magma chamber (e.g., postulated earthquakes); * accumulation of xenoliths within a feeder conduit or vent conduit. 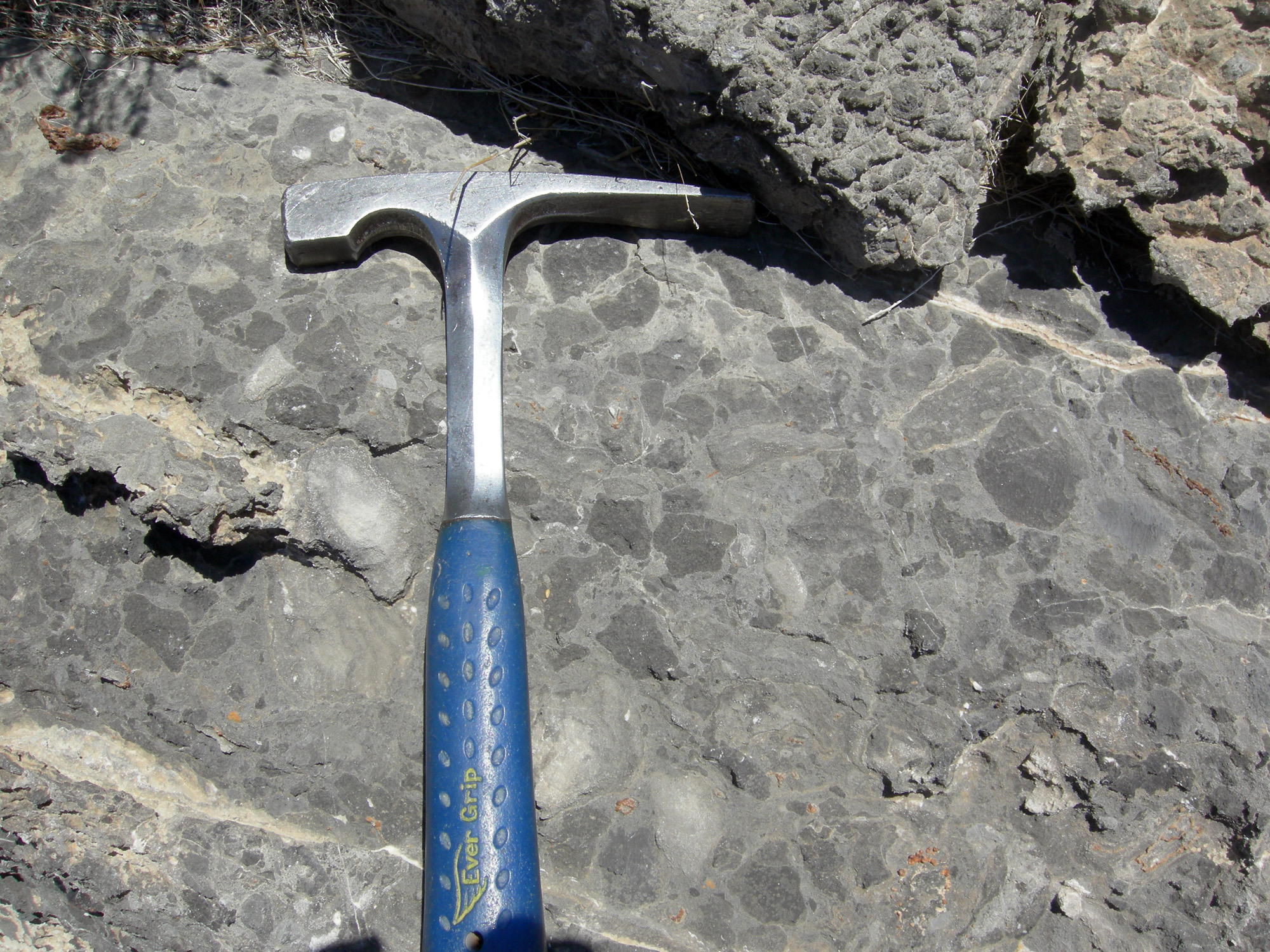 Impact breccias are thought to be diagnostic of an impact event such as an asteroid or comet striking the Earth and are normally found at impact craters. Impact breccia, a type of impactite, forms during the process of impact cratering when large meteorites or comets impact with the Earth or other rocky planets or asteroids. Breccia of this type may be present on or beneath the floor of the crater, in the rim, or in the ejecta expelled beyond the crater. Impact breccia may be identified by its occurrence in or around a known impact crater, and/or an association with other products of impact cratering such as shatter cones, impact glass, shocked minerals, and chemical and isotopic evidence of contamination with extraterrestrial material (e.g., iridium and osmium anomalies). An example of an impact breccia is the Neugrund breccia, which was formed in the Neugrund impact. 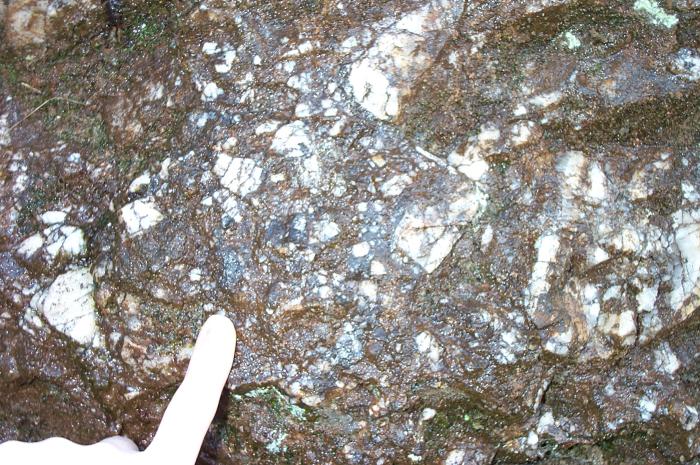 Hydrothermal breccias usually form at shallow crustal levels (<1 km) between 150 and 350 °C, when seismic or volcanic activity causes a void to open along a fault deep underground. The void draws in hot water, and as pressure in the cavity drops, the water violently boils. In addition, the sudden opening of a cavity causes rock at the sides of the fault to destabilise and implode inwards, and the broken rock gets caught up in a churning mixture of rock, steam and boiling water. Rock fragments collide with each other and the sides of the void, and the angular fragments become more rounded. Volatile gases are lost to the steam phase as boiling continues, in particular carbon dioxide. As a result, the chemistry of the fluids changes and ore minerals rapidly precipitate. Breccia-hosted ore deposits are quite common.

The morphology of breccias associated with ore deposits varies from tabular sheeted veins and clastic dikes associated with overpressured sedimentary strata, to large-scale intrusive diatreme breccias (breccia pipes), or even some synsedimentary diatremes formed solely by the overpressure of pore fluid within sedimentary basins. Hydrothermal breccias are usually formed by hydrofracturing of rocks by highly pressured hydrothermal fluids. They are typical of the epithermal ore environment and are intimately associated with intrusive-related ore deposits such as skarns, greisens and porphyry-related mineralisation. Epithermal deposits are mined for copper, silver and gold. In the mesothermal regime, at much greater depths, fluids under lithostatic pressure can be released during seismic activity associated with mountain building. The pressurised fluids ascend towards shallower crustal levels that are under lower hydrostatic pressure. On their journey, high-pressure fluids crack rock by hydrofracturing, forming an angular ''in situ'' breccia. Rounding of rock fragments is less common in the mesothermal regime, as the formational event is brief. If boiling occurs, methane and hydrogen sulfide may be lost to the steam phase, and ore may precipitate. Mesothermal deposits are often mined for gold.

For thousands of years, the striking visual appearance of breccias has made them a popular sculptural and architectural material. Breccia was used for column bases in the Minoan palace of Knossos on Crete in about 1800 BC.