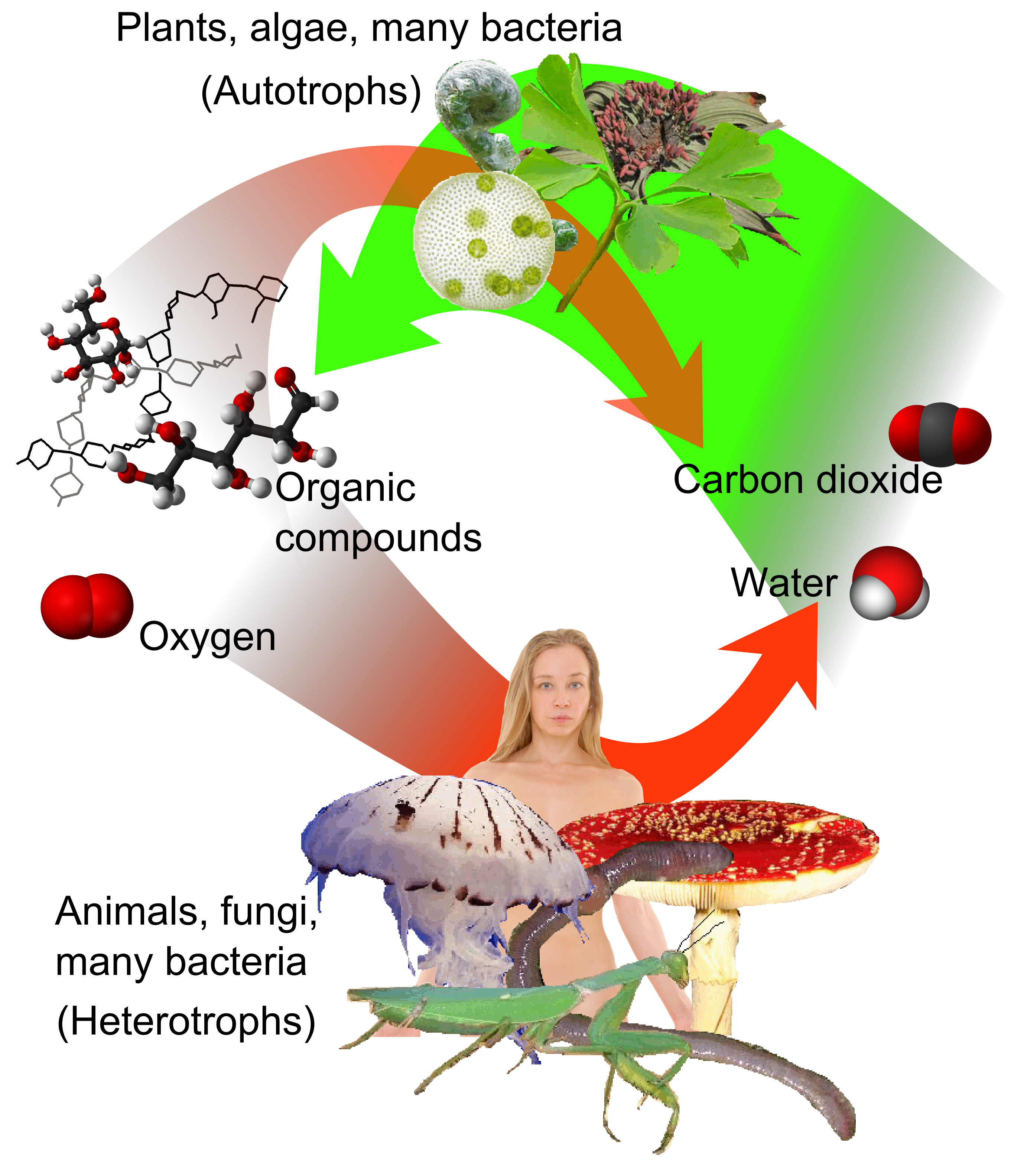 An autotroph or primary producer is an organism that produces complex organic compounds (such as carbohydrates, fats, and proteins) using carbon from simple substances such as carbon dioxide, generally using energy from light (photosynthesis) or inorganic chemical reactions (chemosynthesis). They convert an abiotic source of energy (e.g. light) into energy stored in organic compounds, which can be used by other organisms (e.g. heterotrophs). Autotrophs do not need a living source of carbon or energy and are the producers in a food chain, such as plants on land or algae in water (in contrast to heterotrophs as consumers of autotrophs or other heterotrophs). Autotrophs can reduce carbon dioxide to make organic compounds for biosynthesis and as stored chemical fuel. Most autotrophs use water as the reducing agent, but some can use other hydrogen compounds such as hydrogen sulfide. The primary producers can convert the energy in the light (phototroph and photoautotroph) or the energy in inorganic chemical compounds (chemotrophs or chemolithotrophs) to build organic molecules, which is usually accumulated in the form of biomass and will be used as carbon and energy source by other organisms (e.g. heterotrophs and mixotrophs). The photoautotrophs are the main primary producers, converting the energy of the light into chemical energy through photosynthesis, ultimately building organic molecules from carbon dioxide, an inorganic carbon source. Examples of chemolithotrophs are some archaea and bacteria (unicellular organisms) that produce biomass from the oxidation of inorganic chemical compounds, these organisms are called chemoautotrophs, and are frequently found in hydrothermal vents in the deep ocean. Primary producers are at the lowest trophic level, and are the reasons why Earth is sustainable for life to this day. Most chemoautotrophs are lithotrophs, using inorganic electron donors such as hydrogen sulfide, hydrogen gas, elemental sulfur, ammonium and ferrous oxide as reducing agents and hydrogen sources for biosynthesis and chemical energy release. Autotrophs use a portion of the ATP produced during photosynthesis or the oxidation of chemical compounds to reduce NADP+ to NADPH to form organic compounds. 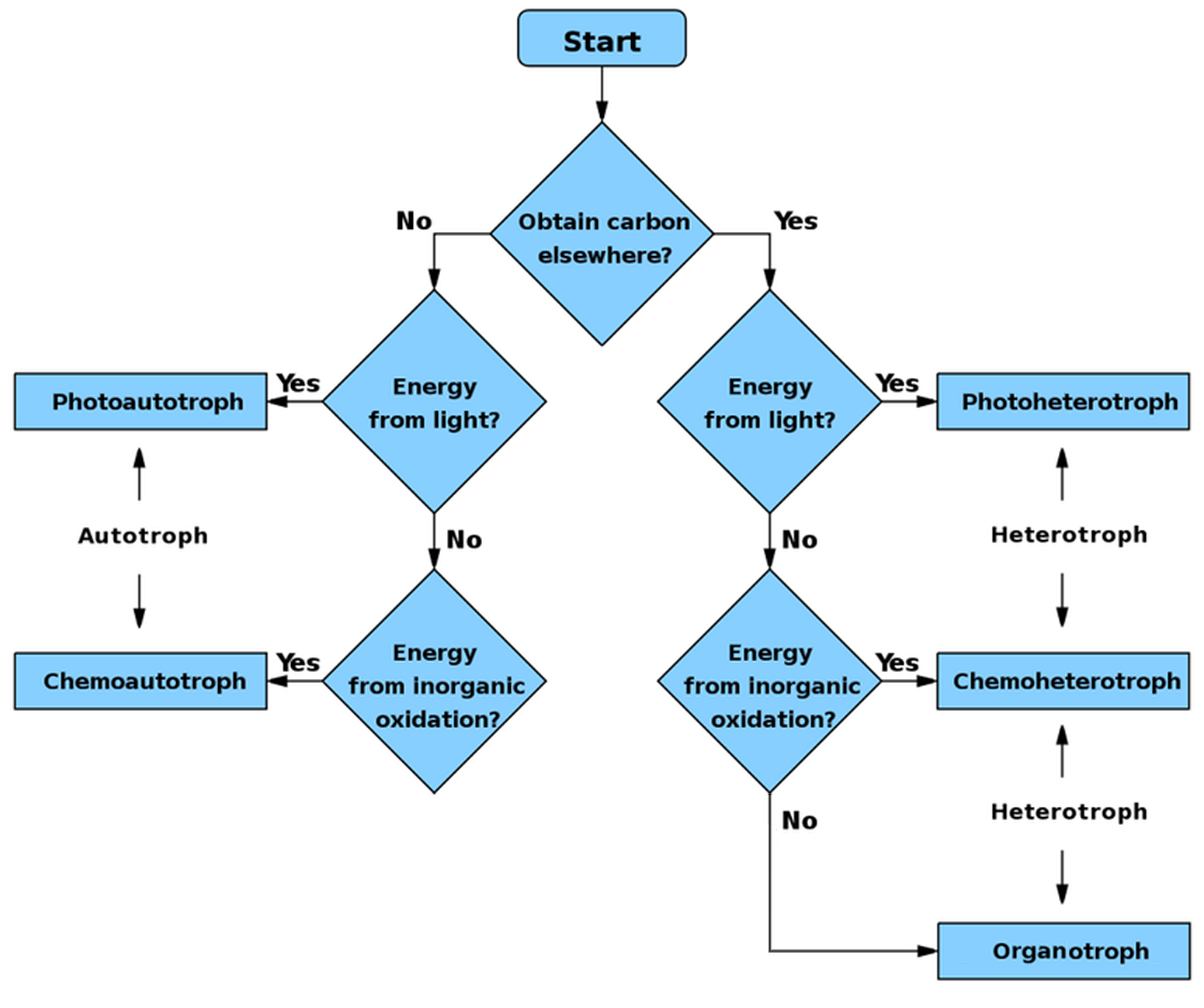 200px|Green fronds of a maidenhair fern, a photoautotroph Without primary producers, organisms that are capable of producing energy on their own, the Earth would be unable to sustain itself. Plants, along with other primary producers, produce the energy that beings consume, and the oxygen that they breathe. It is thought that the first organisms on Earth were primary producers located on the ocean floor. Autotrophs are fundamental to the food chains of all ecosystems in the world. They take energy from the environment in the form of sunlight or inorganic chemicals and use it to create fuel molecules such as carbohydrates. This mechanism is called primary production. Other organisms, called heterotrophs, take in autotrophs as food to carry out functions necessary for their life. Thus, heterotrophs – all animals, almost all fungi, as well as most bacteria and protozoa – depend on autotrophs, or primary producers, for the raw materials and fuel they need. Heterotrophs obtain energy by breaking down carbohydrates or oxidizing organic molecules (carbohydrates, fats, and proteins) obtained in food. Carnivorous organisms rely on autotrophs indirectly, as the nutrients obtained from their heterotrophic prey come from autotrophs they have consumed. Most ecosystems are supported by the autotrophic primary production of plants and cyanobacteria that capture photons initially released by the sun. Plants can only use a fraction (approximately 1%) of this energy for photosynthesis. The process of photosynthesis splits a water molecule (), releasing oxygen () into the atmosphere, and reducing carbon dioxide () to release the hydrogen atoms that fuel the metabolic process of primary production. Plants convert and store the energy of the photon into the chemical bonds of simple sugars during photosynthesis. These plant sugars are polymerized for storage as long-chain carbohydrates, including other sugars, starch, and cellulose; glucose is also used to make fats and proteins. When autotrophs are eaten by heterotrophs, i.e., consumers such as animals, the carbohydrates, fats, and proteins contained in them become energy sources for the heterotrophs. Proteins can be made using nitrates, sulfates, and phosphates in the soil.

Aquatic algae are a significant contributor to food webs in tropical rivers and streams. This is displayed by net primary production, a fundamental ecological process that reflects the amount of carbon that is synthesized within an ecosystem. This carbon ultimately becomes available to consumers. Net primary production displays that the rates of in-stream primary production in tropical regions are at least an order of magnitude greater than similar temperate systems.