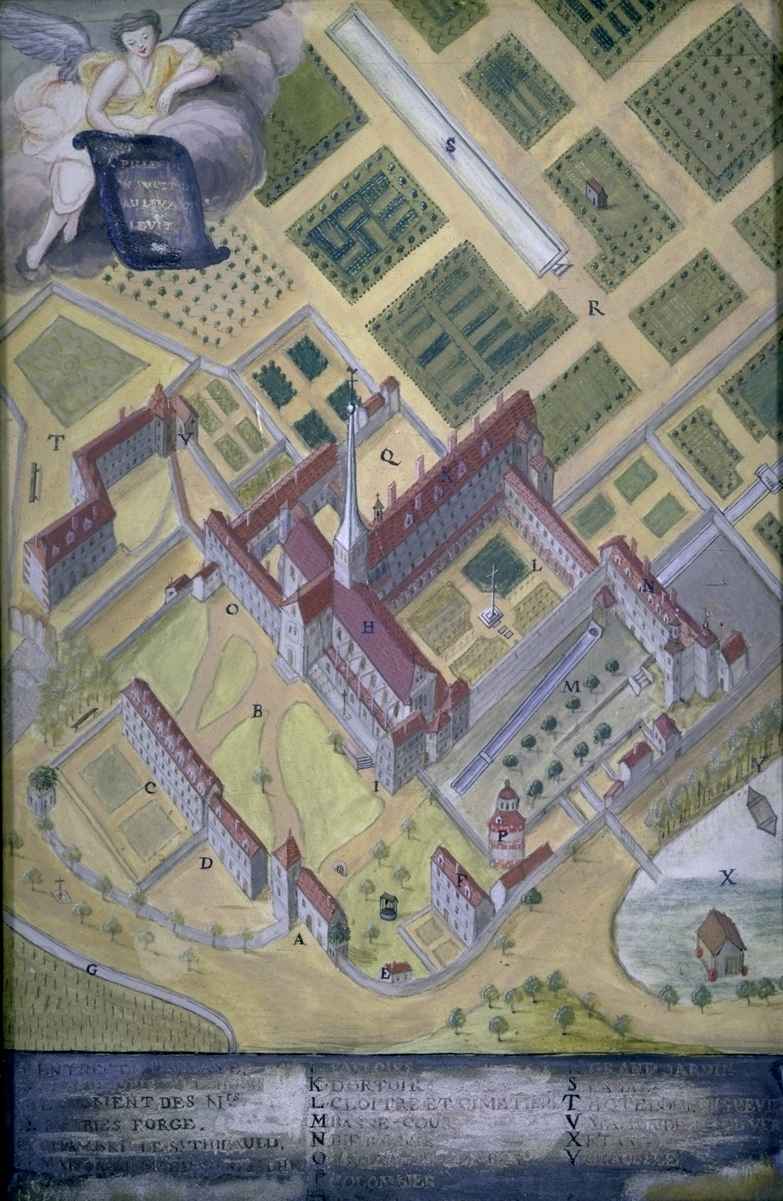 An architectural drawing or architect's drawing is a technical drawing of a building (or building project) that falls within the definition of architecture. Architectural drawings are used by architects and others for a number of purposes: to develop a design idea into a coherent proposal, to communicate ideas and concepts, to convince clients of the merits of a design, to assist a building contractor to construct it based on design intent, as a record of the design and planned development, or to make a record of a building that already exists. Architectural drawings are made according to a set of conventions, which include particular views (floor plan, section etc.), sheet sizes, units of measurement and scales, annotation and cross referencing. Historically, drawings were made in ink on paper or a similar material, and any copies required had to be laboriously made by hand. The twentieth century saw a shift to drawing on tracing paper, so that mechanical copies could be run off efficiently. The development of the computer had a major impact on the methods used to design and create technical drawings, making manual drawing almost obsolete, and opening up new possibilities of form using organic shapes and complex geometry. Today the vast majority of drawings are created using CAD software.

The size of drawings reflects the materials available and the size that is convenient to transport – rolled up or folded, laid out on a table, or pinned up on a wall. The drafting process may impose limitations on the size that is realistically workable. Sizes are determined by a consistent paper size system, according to local usage. Normally the largest paper size used in modern architectural practice is ISO A0 () or in the USA Arch E () or Large E size (). Architectural drawings are drawn to scale, so that relative sizes are correctly represented. The scale is chosen both to ensure the whole building will fit on the chosen sheet size, and to show the required amount of detail. At the scale of one eighth of an inch to one foot (1:96) or the metric equivalent 1 to 100, walls are typically shown as simple outlines corresponding to the overall thickness. At a larger scale, half an inch to one foot (1:24) or the nearest common metric equivalent 1 to 20, the layers of different materials that make up the wall construction are shown. Construction details are drawn to a larger scale, in some cases full size (1 to 1 scale). Scale drawings enable dimensions to be "read" off the drawing, i.e. measured directly. Imperial scales (feet and inches) are equally readable using an ordinary ruler. On a one-eighth inch to one foot scale drawing, the one-eighth divisions on the ruler can be read off as feet. Architects normally use a scale ruler with different scales marked on each edge. A third method, used by builders in estimating, is to measure directly off the drawing and multiply by the scale factor. Dimensions can be measured off drawings made on a stable medium such as vellum. All processes of reproduction introduce small errors, especially now that different copying methods mean that the same drawing may be re-copied, or copies made in several different ways. Consequently, dimensions need to be written ("figured") on the drawing. The disclaimer "Do not scale off dimensions" is commonly inscribed on architects drawings, to guard against errors arising in the copying process.

''This section deals with the conventional views used to represent a building or structure. See the Types of architectural drawing section below for drawings classified according to their purpose.''

A floor plan is the most fundamental architectural diagram, a view from above showing the arrangement of spaces in building in the same way as a map, but showing the arrangement at a particular level of a building. Technically it is a horizontal section cut through a building (conventionally at four feet / one metre and twenty centimetres above floor level), showing walls, windows and door openings and other features at that level. The plan view includes anything that could be seen below that level: the floor, stairs (but only up to the plan level), fittings and sometimes furniture. Objects above the plan level (e.g. beams overhead) can be indicated as dashed lines. Geometrically, plan view is defined as a vertical orthographic projection of an object on to a horizontal plane, with the horizontal plane cutting through the building.

A site plan is a specific type of plan, showing the whole context of a building or group of buildings. A site plan shows property boundaries and means of access to the site, and nearby structures if they are relevant to the design. For a development on an urban site, the site plan may need to show adjoining streets to demonstrate how the design fits into the urban fabric. Within the site boundary, the site plan gives an overview of the entire scope of work. It shows the buildings (if any) already existing and those that are proposed, usually as a building footprint; roads, parking lots, footpaths, hard landscaping, trees and planting. For a construction project, the site plan also needs to show all the services connections: drainage and sewer lines, water supply, electrical and communications cables, exterior lighting etc. Site plans are commonly used to represent a building proposal prior to detailed design: drawing up a site plan is a tool for deciding both the site layout and the size and orientation of proposed new buildings. A site plan is used to verify that a proposal complies with local development codes, including restrictions on historical sites. In this context the site plan forms part of a legal agreement, and there may be a requirement for it to be drawn up by a licensed professional: architect, engineer, landscape architect or land surveyor. 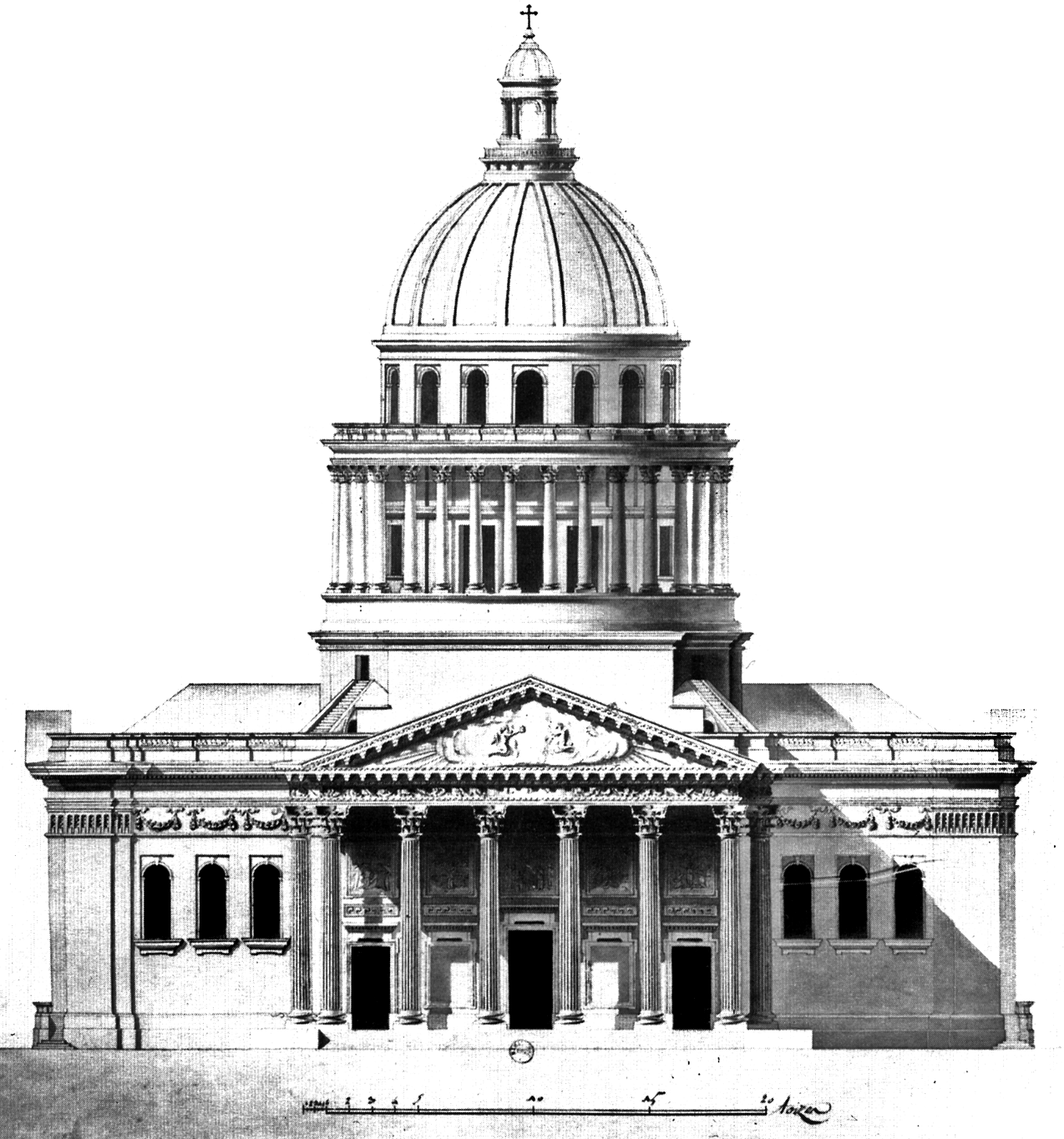 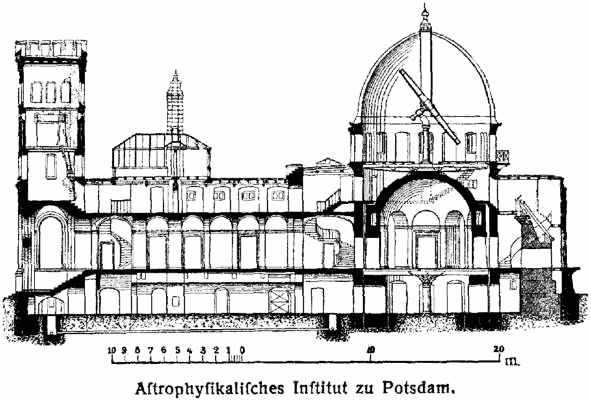 A cross section, also simply called a section, represents a vertical plane cut through the object, in the same way as a floor plan is a horizontal section viewed from the top. In the section view, everything cut by the section plane is shown as a bold line, often with a solid fill to show objects that are cut through, and anything seen beyond generally shown in a thinner line. Sections are used to describe the relationship between different levels of a building. In the Observatorium drawing illustrated here, the section shows the dome which can be seen from the outside, a second dome that can only be seen inside the building, and the way the space between the two accommodates a large astronomical telescope: relationships that would be difficult to understand from plans alone. A sectional elevation is a combination of a cross section, with elevations of other parts of the building seen beyond the section plane. Geometrically, a cross section is a horizontal orthographic projection of a building on to a vertical plane, with the vertical plane cutting through the building.

Isometric and axonometric projections are a simple way of representing a three dimensional object, keeping the elements to scale and showing the relationship between several sides of the same object, so that the complexities of a shape can be clearly understood. There is some confusion over the distinction between the terms isometric and axonometric. "Axonometric is a word that has been used by architects for hundreds of years. Engineers use the word axonometric as a generic term to include isometric, diametric and trimetric drawings." This article uses the terms in the architecture-specific sense. Despite fairly complex geometrical explanations, for the purposes of practical drafting the difference between isometric and axonometric is simple (see diagram above). In both, the plan is drawn on a skewed or rotated grid, and the verticals are projected vertically on the page. All lines are drawn to scale so that relationships between elements are accurate. In many cases a different scale is required for different axes, and again this can be calculated but in practice was often simply estimated by eye. * An isometric uses a plan grid at 30 degrees from the horizontal in both directions, which distorts the plan shape. Isometric graph paper can be used to construct this kind of drawing. This view is useful to explain construction details (e.g. three dimensional joints in joinery). The isometric was the standard view until the mid twentieth century, remaining popular until the 1970s, especially for textbook diagrams and illustrations. * Cabinet projection is similar, but only one axis is skewed, the others being horizontal and vertical. Originally used in cabinet making, the advantage is that a principal side (e.g. a cabinet front) is displayed without distortion, so only the less important sides are skewed. The lines leading away from the eye are drawn at a reduced scale to lessen the degree of distortion. The cabinet projection is seen in Victorian engraved advertisements and architectural textbooks,