Arc length is the distance between two points along a section of a curve. Determining the length of an irregular arc segment is also called of a curve. The advent of infinitesimal calculus led to a general formula that provides closed-form solutions in some cases.

A curve in the plane can be approximated by connecting a finite number of points on the curve using line segments to create a polygonal path. Since it is straightforward to calculate the length of each linear segment (using the Pythagorean theorem in Euclidean space, for example), the total length of the approximation can be found by summing the lengths of each linear segment; that approximation is known as the ''(cumulative) chordal distance''. If the curve is not already a polygonal path, using a progressively larger number of segments of smaller lengths will result in better approximations. The lengths of the successive approximations will not decrease and may keep increasing indefinitely, but for smooth curves they will tend to a finite limit as the lengths of the segments get arbitrarily small. For some curves there is a smallest number that is an upper bound on the length of any polygonal approximation. These curves are called and the number is defined as the .

Definition for a smooth curve

Let be an injective and continuously differentiable function. The length of the curve defined by can be defined as the limit of the sum of line segment lengths for a regular partition of 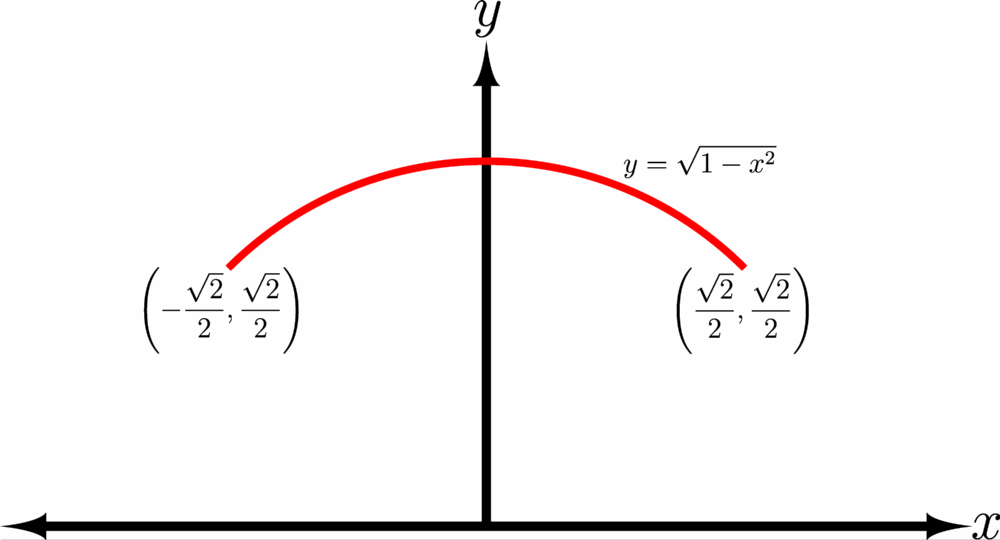 If a planar curve in is defined by the equation where is continuously differentiable, then it is simply a special case of a parametric equation where and The arc length is then given by: : Curves with closed-form solutions for arc length include the catenary, circle, cycloid, logarithmic spiral, parabola, semicubical parabola and straight line. The lack of a closed form solution for the arc length of an elliptic and hyperbolic arc led to the development of the elliptic integrals.


Curve on a surface

Arc lengths are denoted by ''s'', since the Latin word for length (or size) is ''spatium''. In the following lines, represents the radius of a circle, is its diameter, is its circumference, is the length of an arc of the circle, and is the angle which the arc subtends at the centre of the circle. The distances and are expressed in the same units. * which is the same as This equation is a definition of * If the arc is a semicircle, then * For an arbitrary circular arc: ** If is in radians then This is a definition of the radian. ** If is in degrees, then which is the same as ** If is in grads (100 grads, or grades, or gradians are one right-angle), then which is the same as ** If is in turns (one turn is a complete rotation, or 360°, or 400 grads, or radians), then .

Arcs of great circles on the Earth

Two units of length, the nautical mile and the metre (or kilometre), were originally defined so the lengths of arcs of great circles on the Earth's surface would be simply numerically related to the angles they subtend at its centre. The simple equation applies in the following circumstances: :* if is in nautical miles, and is in arcminutes ( degree), or :* if is in kilometres, and is in centigrades ( grad). The lengths of the distance units were chosen to make the circumference of the Earth equal kilometres, or nautical miles. Those are the numbers of the corresponding angle units in one complete turn. Those definitions of the metre and the nautical mile have been superseded by more precise ones, but the original definitions are still accurate enough for conceptual purposes and some calculations. For example, they imply that one kilometre is exactly 0.54 nautical miles. Using official modern definitions, one nautical mile is exactly 1.852 kilometres, which implies that 1 kilometre is about nautical miles. This modern ratio differs from the one calculated from the original definitions by less than one part in 10,000.


Length of an arc of a parabola

For much of the history of mathematics, even the greatest thinkers considered it impossible to compute the length of an irregular arc. Although Archimedes had pioneered a way of finding the area beneath a curve with his "method of exhaustion", few believed it was even possible for curves to have definite lengths, as do straight lines. The first ground was broken in this field, as it often has been in calculus, by approximation. People began to inscribe polygons within the curves and compute the length of the sides for a somewhat accurate measurement of the length. By using more segments, and by decreasing the length of each segment, they were able to obtain a more and more accurate approximation. In particular, by inscribing a polygon of many sides in a circle, they were able to find approximate values of π.

In the 17th century, the method of exhaustion led to the rectification by geometrical methods of several transcendental curves: the logarithmic spiral by Evangelista Torricelli in 1645 (some sources say John Wallis in the 1650s), the cycloid by Christopher Wren in 1658, and the catenary by Gottfried Leibniz in 1691. In 1659, Wallis credited William Neile's discovery of the first rectification of a nontrivial algebraic curve, the semicubical parabola. The accompanying figures appear on page 145. On page 91, William Neile is mentioned as ''Gulielmus Nelius''.

Before the full formal development of calculus, the basis for the modern integral form for arc length was independently discovered by Hendrik van Heuraet and Pierre de Fermat. In 1659 van Heuraet published a construction showing that the problem of determining arc length could be transformed into the problem of determining the area under a curve (i.e., an integral). As an example of his method, he determined the arc length of a semicubical parabola, which required finding the area under a parabola. In 1660, Fermat published a more general theory containing the same result in his ''De linearum curvarum cum lineis rectis comparatione dissertatio geometrica'' (Geometric dissertation on curved lines in comparison with straight lines).

Building on his previous work with tangents, Fermat used the curve : whose tangent at ''x'' = ''a'' had a slope of : so the tangent line would have the equation : Next, he increased ''a'' by a small amount to ''a'' + ''ε'', making segment ''AC'' a relatively good approximation for the length of the curve from ''A'' to ''D''. To find the length of the segment ''AC'', he used the Pythagorean theorem: : which, when solved, yields : In order to approximate the length, Fermat would sum up a sequence of short segments.

As mentioned above, some curves are non-rectifiable. That is, there is no upper bound on the lengths of polygonal approximations; the length can be made arbitrarily large. Informally, such curves are said to have infinite length. There are continuous curves on which every arc (other than a single-point arc) has infinite length. An example of such a curve is the Koch curve. Another example of a curve with infinite length is the graph of the function defined by ''f''(''x'') = ''x'' sin(1/''x'') for any open set with 0 as one of its delimiters and ''f''(0) = 0. Sometimes the Hausdorff dimension and Hausdorff measure are used to quantify the size of such curves.

Let be a (pseudo-)Riemannian manifold, a curve in and the (pseudo-) metric tensor. The length of is defined to be : where is the tangent vector of at The sign in the square root is chosen once for a given curve, to ensure that the square root is a real number. The positive sign is chosen for spacelike curves; in a pseudo-Riemannian manifold, the negative sign may be chosen for timelike curves. Thus the length of a curve is a non-negative real number. Usually no curves are considered which are partly spacelike and partly timelike. In theory of relativity, arc length of timelike curves (world lines) is the proper time elapsed along the world line, and arc length of a spacelike curve the proper distance along the curve.