Anatomy (Greek ''anatomē'', 'dissection') is the branch of biology concerned with the study of the structure of organisms and their parts. Anatomy is a branch of natural science which deals with the structural organization of living things. It is an old science, having its beginnings in prehistoric times. Anatomy is inherently tied to developmental biology, embryology, comparative anatomy, evolutionary biology, and phylogeny, as these are the processes by which anatomy is generated, both over immediate and long-term timescales. Anatomy and physiology, which study the structure and function of organisms and their parts respectively, make a natural pair of related disciplines, and are often studied together. Human anatomy is one of the essential basic sciences that are applied in medicine. The discipline of anatomy is divided into macroscopic and microscopic. Macroscopic anatomy, or gross anatomy, is the examination of an animal's body parts using unaided eyesight. Gross anatomy also includes the branch of superficial anatomy. Microscopic anatomy involves the use of optical instruments in the study of the tissues of various structures, known as histology, and also in the study of cells. The history of anatomy is characterized by a progressive understanding of the functions of the organs and structures of the human body. Methods have also improved dramatically, advancing from the examination of animals by dissection of carcasses and cadavers (corpses) to 20th century medical imaging techniques including X-ray, ultrasound, and magnetic resonance imaging.

Derived from the Greek ''anatomē'' "dissection" (from ''anatémnō'' "I cut up, cut open" from ἀνά ''aná'' "up", and τέμνω ''témnō'' "I cut"), anatomy is the scientific study of the structure of organisms including their systems, organs and tissues. It includes the appearance and position of the various parts, the materials from which they are composed, their locations and their relationships with other parts. Anatomy is quite distinct from physiology and biochemistry, which deal respectively with the functions of those parts and the chemical processes involved. For example, an anatomist is concerned with the shape, size, position, structure, blood supply and innervation of an organ such as the liver; while a physiologist is interested in the production of bile, the role of the liver in nutrition and the regulation of bodily functions. The discipline of anatomy can be subdivided into a number of branches including gross or macroscopic anatomy and microscopic anatomy. Gross anatomy is the study of structures large enough to be seen with the naked eye, and also includes superficial anatomy or surface anatomy, the study by sight of the external body features. Microscopic anatomy is the study of structures on a microscopic scale, along with histology (the study of tissues), and embryology (the study of an organism in its immature condition). Anatomy can be studied using both invasive and non-invasive methods with the goal of obtaining information about the structure and organization of organs and systems. Methods used include dissection, in which a body is opened and its organs studied, and endoscopy, in which a video camera-equipped instrument is inserted through a small incision in the body wall and used to explore the internal organs and other structures. Angiography using X-rays or magnetic resonance angiography are methods to visualize blood vessels. The term "anatomy" is commonly taken to refer to human anatomy. However, substantially the same structures and tissues are found throughout the rest of the animal kingdom and the term also includes the anatomy of other animals. The term ''zootomy'' is also sometimes used to specifically refer to non-human animals. The structure and tissues of plants are of a dissimilar nature and they are studied in plant anatomy.

Connective tissues are fibrous and made up of cells scattered among inorganic material called the extracellular matrix. Connective tissue gives shape to organs and holds them in place. The main types are loose connective tissue, adipose tissue, fibrous connective tissue, cartilage and bone. The extracellular matrix contains proteins, the chief and most abundant of which is collagen. Collagen plays a major part in organizing and maintaining tissues. The matrix can be modified to form a skeleton to support or protect the body. An exoskeleton is a thickened, rigid cuticle which is stiffened by mineralization, as in crustaceans or by the cross-linking of its proteins as in insects. An endoskeleton is internal and present in all developed animals, as well as in many of those less developed.

Epithelial tissue is composed of closely packed cells, bound to each other by cell adhesion molecules, with little intercellular space. Epithelial cells can be squamous (flat), cuboidal or columnar and rest on a basal lamina, the upper layer of the basement membrane, the lower layer is the reticular lamina lying next to the connective tissue in the extracellular matrix secreted by the epithelial cells. There are many different types of epithelium, modified to suit a particular function. In the respiratory tract there is a type of ciliated epithelial lining; in the small intestine there are microvilli on the epithelial lining and in the large intestine there are intestinal villi. Skin consists of an outer layer of keratinized stratified squamous epithelium that covers the exterior of the vertebrate body. Keratinocytes make up to 95% of the cells in the skin. The epithelial cells on the external surface of the body typically secrete an extracellular matrix in the form of a cuticle. In simple animals this may just be a coat of glycoproteins. In more advanced animals, many glands are formed of epithelial cells. 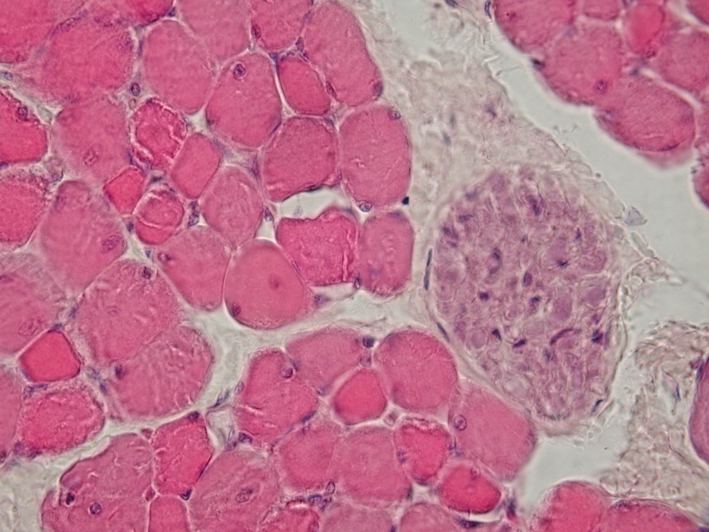 Muscle cells (myocytes) form the active contractile tissue of the body. Muscle tissue functions to produce force and cause motion, either locomotion or movement within internal organs. Muscle is formed of contractile filaments and is separated into three main types; smooth muscle, skeletal muscle and cardiac muscle. Smooth muscle has no striations when examined microscopically. It contracts slowly but maintains contractibility over a wide range of stretch lengths. It is found in such organs as sea anemone tentacles and the body wall of sea cucumbers. Skeletal muscle contracts rapidly but has a limited range of extension. It is found in the movement of appendages and jaws. Obliquely striated muscle is intermediate between the other two. The filaments are staggered and this is the type of muscle found in earthworms that can extend slowly or make rapid contractions. In higher animals striated muscles occur in bundles attached to bone to provide movement and are often arranged in antagonistic sets. Smooth muscle is found in the walls of the uterus, bladder, intestines, stomach, oesophagus, respiratory airways, and blood vessels. Cardiac muscle is found only in the heart, allowing it to contract and pump blood round the body.

Nervous tissue is composed of many nerve cells known as neurons which transmit information. In some slow-moving radially symmetrical marine animals such as ctenophores and cnidarians (including sea anemones and jellyfish), the nerves form a nerve net, but in most animals they are organized longitudinally into bundles. In simple animals, receptor neurons in the body wall cause a local reaction to a stimulus. In more complex animals, specialized receptor cells such as chemoreceptors and photoreceptors are found in groups and send messages along neural networks to other parts of the organism. Neurons can be connected together in ganglia. In higher animals, specialized receptors are the basis of sense organs and there is a central nervous system (brain and spinal cord) and a peripheral nervous system. The latter consists of sensory nerves that transmit information from sense organs and motor nerves that influence target organs. The peripheral nervous system is divided into the somatic nervous system which conveys sensation and controls voluntary muscle, and the autonomic nervous system which involuntarily controls smooth muscle, certain glands and internal organs, including the stomach.

All vertebrates have a similar basic body plan and at some point in their lives, mostly in the embryonic stage, share the major chordate characteristics; a stiffening rod, the notochord; a dorsal hollow tube of nervous material, the neural tube; pharyngeal arches; and a tail posterior to the anus. The spinal cord is protected by the vertebral column and is above the notochord and the gastrointestinal tract is below it. Nervous tissue is derived from the ectoderm, connective tissues are derived from mesoderm, and gut is derived from the endoderm. At the posterior end is a tail which continues the spinal cord and vertebrae but not the gut. The mouth is found at the anterior end of the animal, and the anus at the base of the tail. The defining characteristic of a vertebrate is the vertebral column, formed in the development of the segmented series of vertebrae. In most vertebrates the notochord becomes the nucleus pulposus of the intervertebral discs. However, a few vertebrates, such as the sturgeon and the coelacanth retain the notochord into adulthood. Jawed vertebrates are typified by paired appendages, fins or legs, which may be secondarily lost. The limbs of vertebrates are considered to be homologous because the same underlying skeletal structure was inherited from their last common ancestor. This is one of the arguments put forward by Charles Darwin to support his theory of evolution. 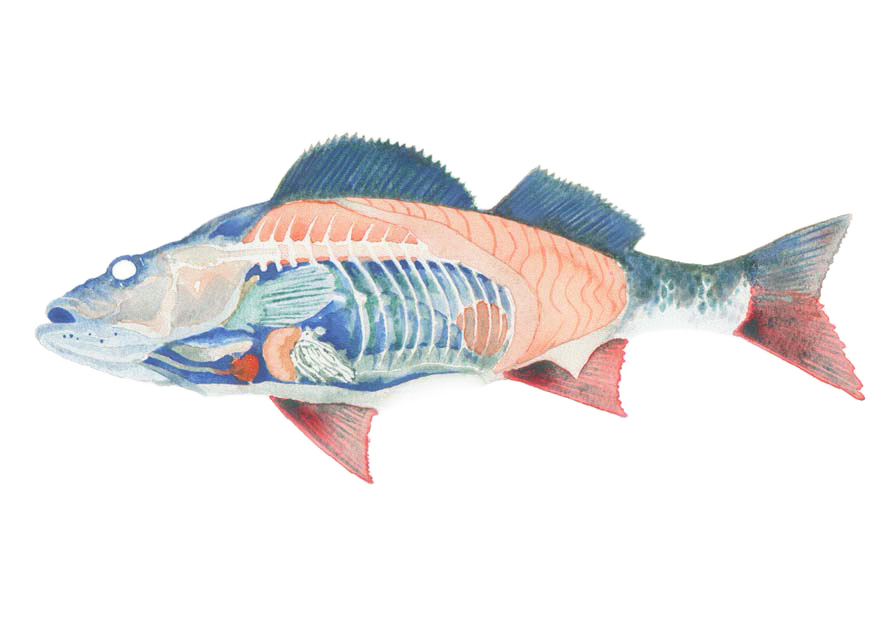 The body of a fish is divided into a head, trunk and tail, although the divisions between the three are not always externally visible. The skeleton, which forms the support structure inside the fish, is either made of cartilage, in cartilaginous fish, or bone in bony fish. The main skeletal element is the vertebral column, composed of articulating vertebrae which are lightweight yet strong. The ribs attach to the spine and there are no limbs or limb girdles. The main external features of the fish, the fins, are composed of either bony or soft spines called rays, which with the exception of the caudal fins, have no direct connection with the spine. They are supported by the muscles which compose the main part of the trunk.