Yaudheya or Yoddheya Gana (Yoddheya Republic) was an ancient militant confederation. The word Yaudheya is a derivative of the word from yodha meaning warriors. They were principally kshatriya renowned for their skills in warfare, as inscribed in the Junagadh rock inscription of Rudradaman by the Indo-Scythian ruler Rudradaman of the Western Satraps. The Yaudheyas emerged in the 5th century BCE and governed independently until being incorporated into the Maurya Empire. Following the disintegration of the Maurya Empire, the Yaudheyas regained autonomy and ruled as contemporaries to the Shunga Empire and Indo-Greek Kingdoms, and minted their own coinage. However, they were conquered by the Kshatraps led by Rudradaman, and although briefly winning independence, they were then annexed by the Kushan Empire under Kanishka. The Yaudheya Republic reformed and flourished up to the middle to the 4th century when it was ultimately conquered by Samudragupta and incorporated into the Gupta Empire until being disestablished.

The Yaudheyas formed in the land between the Indus river and the Ganges river, called Bahudhanyaka, with their capital in Khokrakot (Rohtak). Bahudhanyaka was originally composed of modern-day Haryana. Early Yaudheya coins were additionally found in East Punjab, and North Rajasthan, and Western Uttar Pradesh. They also governed Garhwal, Kumaon, and Himachal Pradesh, in their later military campaigns. Yaudheya coins have been excavated as far as Bahawalpur in Pakistan. In the Mahabharata, the land Bahudhanyaka is stated to be among the countries subjugated by Nakula, the fourth Pandava in his conquest. Bahudhanyaka was the first to fall in Nakulas in of the western direction toward Sakastan, which agrees with the Rohtak-Hisar area. Varahamihira in his Brihatsamhita (XIV.28 and XVI.22) placed them in the northern division of India.

Puranas (e.g. Brahmanda, Vayu, Brahma and Harivamsha) described Yaudheyas as the descendants of Usinara and Nrigu. There are other references to them namely in the Mahabharata, Mahamayuri, Brihatsamhita, Puranas, Chandravyakarana and Kashika. In the Mahabharata, the land Bahudhanyaka is stated to be among the countries subjugated by Nakula, the fourth Pandava. Bahudhanyaka was the first to fall to Nakulas conquest in of the western direction toward Sakastan, which agrees with the Rohtak-Hisar area. Varahamihira in his Brihatsamhita (XIV.28 and XVI.22) placed them in the northern division of India. They are mentioned in Pāṇini's Ashtadhyayi and Ganapatha.


Rise of the Republic 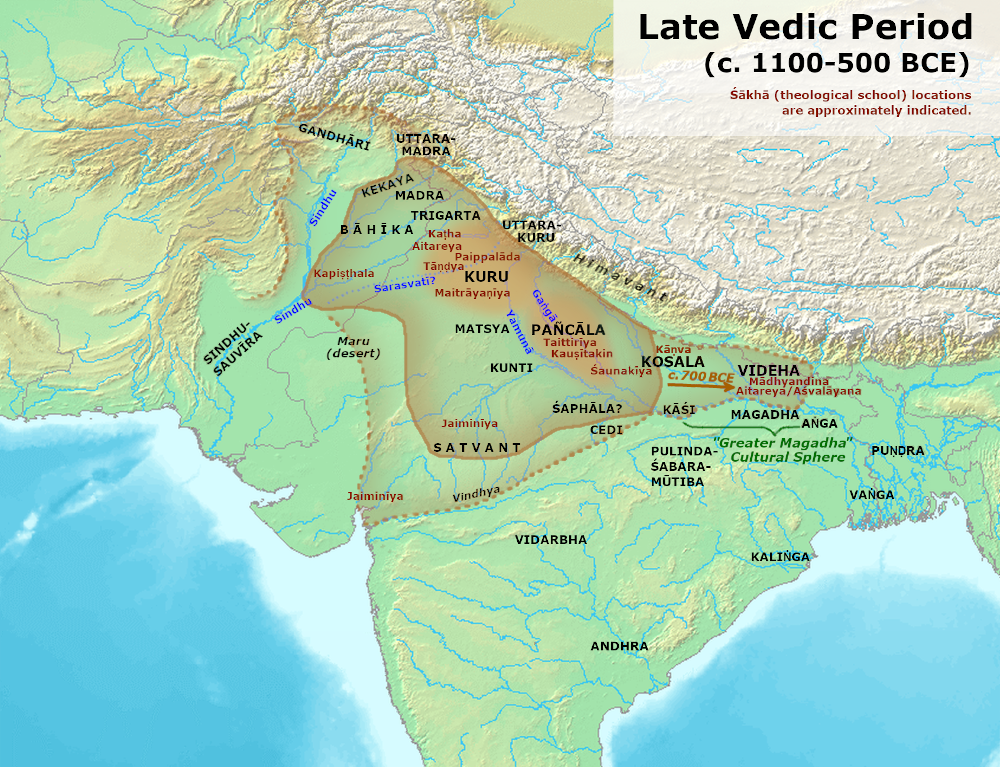 The Yaudheyas emerged as an entity following the decline of the Kuru Kingdom (c. 1200 BCE–c. 525 BCE). The Yaudheyas would eventually encompass the land formerly belonging to the Kurus, including their former capitals Indraprastha, Hastinapur, and Āsandīvat. The Kuru Kingdom which was the prominent power in the Vedic age fell in importance when compared to the other Mahajanapadas. The earliest references of the existence of the Yaudheyas is in Pāṇini's Ashtadhyayi (V.3.116-17 and IV.1.178) of (c.500 BCE) and the Ganapatha. In his works the Yaudheyas are mentioned as ''ayudha-jivin sanghas'' i.e., a community living by the profession of arms. The region of Bahudhanyaka was ruled by the Yaudheyas who minted coins bearing the legend 'Bahudhanyaka Yaudheyanam'.

The Yaudheyas were incorporated into the Maurya Empire by Chandragupta Maurya. They also annexed the Pauravas. Chandragupta, under the tutelage of Chanakya, won over local kingdoms and republics in Punjab before conquering the Nanda Empire. Chandragupta heavily relied on the Yaudheya Gana in his campaigns. His military had a high representation of the Yaudheya Gana and similar republicans. Additionally, Yaudheya elites and chiefs in were appointed government positions. As recorded in the Bijoygarh inscription commissioned around Ashokas reign, the Yaudheya-gana-puraskrta appointed a chief who held the title of Maharaja-Senapati. This chief of the Yaudheya republic was appointed the Mahasenapati or 'Great Commander of the Army' for the Mauryan military. The Arthashastra written by Chanakya described the senapati as adept in all modes of warfare (sarvayudha), all weapons (praharana), possessing modesty and restraint (vidyavinita), and capable of controlling all four wings of the army (chaturangini sena).

Yaudheyas mention military victories on their coins ("Victory of the Yaudheyas"), soon after the Maurya Empire. It is thought the Yaudheyas had become an independent kingdom at that point, and existed concurrently with the Shunga Empire and Indo-Greek Kingdoms. In the second and first century BC the Yaudheyas occupied the Haryana (''Bahudhanyaka'') portion of Greater Punjab; comprising Rohtak, Hissar, Karnal and Gurugram, as well as the adjoining desert of Marwar.

During the second century CE, the Yaudheya gana confronted the Indo-Scythians but they were annexed by Rudradaman I. The Junagadh rock inscription of Rudradaman (c. 150 CE) acknowledged the military might of the Yaudheyas "who would not submit because they were proud of their title "heroes among the Kshatriyas"", although the inscription claims that they were ultimately vanquished by Rudradaman. Despite this devastating conflict, the Yaudheyas retained an identity within the Satrapy and eventually won independence from the Indo-Scythians.

It is thought that the Kushans then became suzerains of the Yaudheyas when they endeavored to hold the Mathura area.