Click Here for Items Related To - University of Vienna


The University of Vienna (german: Universität Wien) is a located in , . It was founded by in 1365 and is the oldest university in the . With its long and rich history, the university has developed into one of the largest universities in Europe, and also one of the most renowned, especially in the . It is associated with 21 Nobel prize winners and has been the academic home to many scholars of historical as well as of academic importance.

From the Middle Ages to the Enlightenment

The University was founded on 12 March 1365 by , and his two brothers, Dukes and , hence the additional name "Alma Mater Rudolphina". After the and in , the University of Vienna is the third oldest university in Central Europe and the oldest university in the contemporary German-speaking world; it remains a question of definition as the Charles University in Prague was German-speaking when founded, too. The University of Vienna was modelled after the . However, did not ratify the deed of foundation that had been sanctioned by Rudolf IV, specifically in relation to the department of theology. This was presumably due to pressure exerted by , who wished to avoid competition for the . Approval was finally received from the Pope in 1384 and the University of Vienna was granted the status of a full university, including the Faculty of Catholic Theology. The first university building opened in 1385. It grew into the biggest university of the , and during the advent of in the mid-15th century was home to more than 6,000 students. In its early years, the university had a partly hierarchical, partly cooperative structure, in which the was at the top, while the students had little say and were settled at the bottom. The and s constituted the four faculties and elected the academic officials from amidst their ranks. The students, but also all other Supposita (university members), were divided into four s. Their elected board members, mostly graduates themselves, had the right to elect the Rector. He presided over the Consistory which included procurators of each of the nations and the faculty deans, as well as over the University Assembly, in which all university teachers participated. Complaints or appeals against decisions of faculty by the students had to be brought forward by a Magister or Doctor. Being considered a Papal Institution, the university suffered quite a setback during the . In addition, the first by Ottoman forces had devastating effects on the city, leading to a sharp decline, with only 30 students enrolled at the lowest point. For King , this meant that the university should be tied to the church to an even stronger degree, and in 1551 he installed the there. With the enacting of the ''Sanctio Pragmatica'' edict by emperor in 1623, the Jesuits took over teaching at the theological and philosophical faculty, and thus the university became a stronghold of Catholicism for over 150 years. It was only in the Mid-18th century that Empress forced the university back under control of the monarchy. Her successor helped in the further reform of the university, allowing both Protestants and Jews to enroll as well as introducing German as the compulsory language of instruction.

From the 19th century onwards

Big changes were instituted in the wake of the , with the Philosophical Faculty being upgraded into equal status as Theology, Law and Medicine. Led by the reforms of , the university was able to achieve a larger degree of academic freedom. The current main building on the was built between 1877 and 1884 by . The previous main building was located close to the ''Stuben'' Gate (Stubentor) on Iganz Seipel Square, current home of the old University Church (''Universitätskirche'') and the (''Österreichische Akademie der Wissenschaften''). Women were admitted as full students from 1897, although their studies were limited to Philosophy. The remaining departments gradually followed suit, although with considerable delay: Medicine in 1900, Law in 1919, Theology in 1923 and finally Theology in 1946. Ten years after the admission of the first female students, became the first woman to receive ', becoming professor of in 1907; she was also the first female distinguished professor. 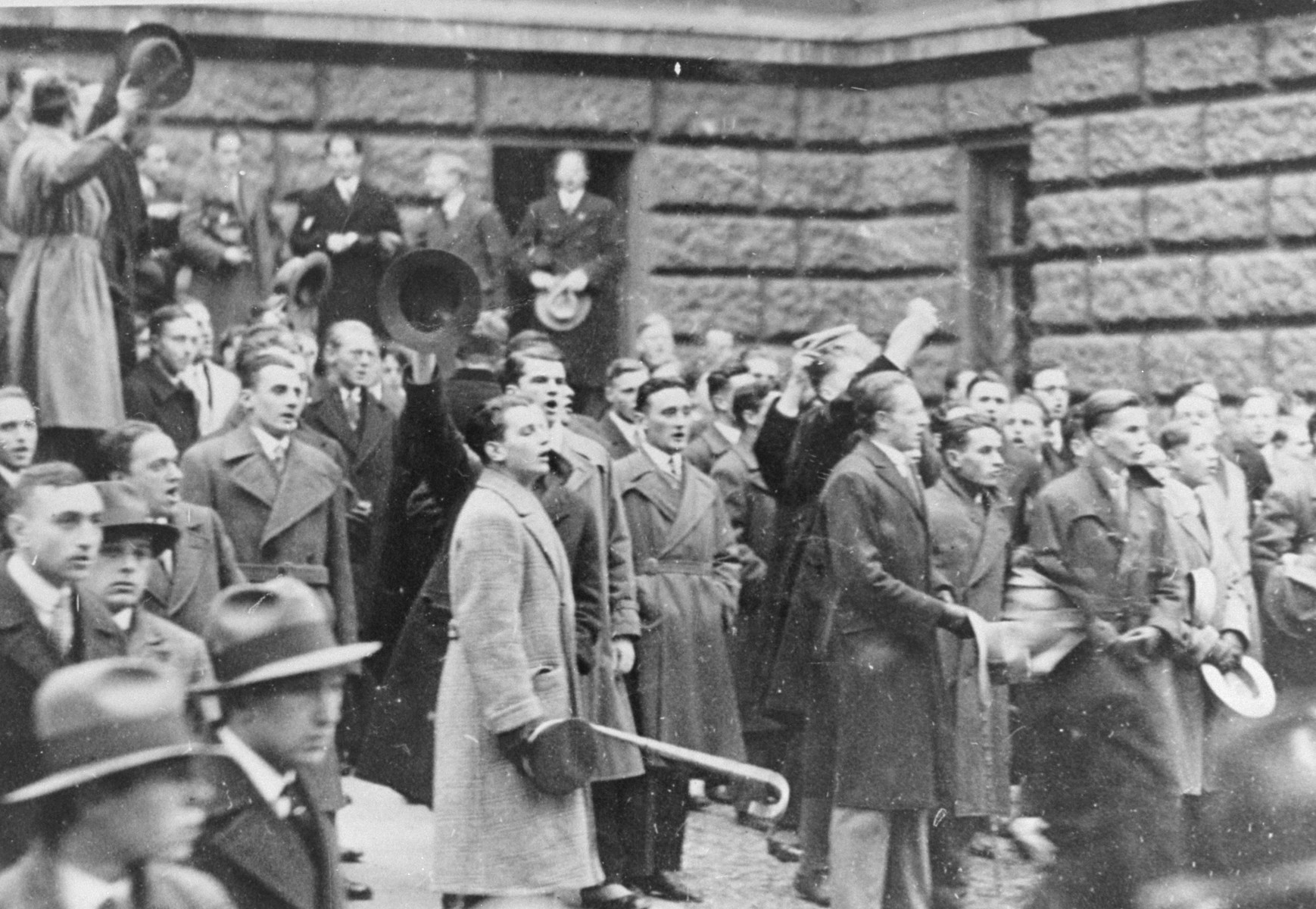 In the late 1920s, the university was in steady turmoil because of anti-democratic and anti-Semitic activity by parts of the student body. Professor was killed by a former student while ascending the steps of the University for a class. His murderer was later released by the Nazi Regime. Following the , the annexation of Austria into Greater Germany by the , in 1938 the University of Vienna was reformed under political aspects and a huge number of teachers and students were dismissed for political and "racial" reasons. In April 1945, the then 22-year-old Kurt Schubert, later acknowledged of at the University of Vienna, was permitted by the to open the university again for teaching, which is why he is regarded as the unofficial first rector in the post-war period. On 25 April 1945, however, the constitutional lawyer senior was elected as official rector of the University of Vienna. A large degree of participation by students and university staff was realized in 1975, however the University Reforms of 1993 and 2002 largely re-established the professors as the main decision makers. However, also as part of the 2002 reform, the university after more than 250 years being largely under governmental control, finally regained its full legal capacity. The number of faculties and centers was increased to 18, and the whole of the medical faculty separated into the new .

The University of Vienna does not have one single campus. Historically, the university started functioning from the First District near the Jesuit Church. Now, the academic facilities occupy more than sixty locations throughout the city of Vienna. The historical main building on the Ringstraße constitutes the university's centre and is commonly referred to as "die Uni". Most other larger university facilities and lecture halls are located nearby in the area of Vienna's First and Ninth : the so-called new Lecture Hall Complex (Neues Institutgebäude, NIG), the lecture hall complex Althanstraße (UZA), the campus on the premises of the , the Faculty of Law (Juridicum) and others. The is housed in the Third District, as are the Department of Biochemistry and related research centres. Also worth mentioning is the , which belongs to the university, and the Institute for University Sports (USI), which offers training and recreational possibilities to all students of the university. In addition, the University of Vienna maintains facilities outside of Vienna in the Austrian provinces of , , and . These are mainly research and experimental departments for Biology, Astrophysics and Sports.

The University of Vienna, like all universities and academies in Austria, once featured a system of democratic representation. Power in the university was divided equally among three groups: students (the largest group), junior faculty and full professors. All groups had the right to send representatives to boards, who then voted on almost every issue. From 2002 on, the government of Austria, headed by , reformed the university system, transforming the institutions into legal entities, but also concentrating power in the hands of the full professors. The reform also introduced a board of governors and tuition fees. In 2013 those amounted to about €381 per semester for students from Austria, the as well as some non-EU countries, while students from developed non-EU countries usually pay double that amount. The reforms also separated the medical departments into separate medical schools, such as the .

There are total 15 s affiliated to the University as follows:

The University Library of the University of Vienna comprises the Main Library and the 50 departmental libraries at the various university locations throughout . The library's primary responsibility is to the members of the university; however, the library's 350 staff members also provide access to the public. Use of the books in the reading halls is open to all persons without the need for identification, which is only required for checking out books. The library's website provides direct access to information such as electronic journals, online indices and databases.

Rudolf IV had already provided for a ''publica libraria'' in the Foundation Deed of 12 March 1365, where the valuable books bequeathed by deceased members of the University should be collected. Through many legacies, this collection was subsequently greatly increased and became the basis of the old ''Libreye'' that was accommodated in the same building as the student infirmary. In addition, there were libraries in the separate Faculties and in the Duke's College. From the 17th century onwards, interest in the old library, with its manuscripts and incunabulae, went into decline and the modern library in the Jesuit College came to the fore. In 1756, the oldest university library was finally closed down and its books, 2,787 volumes, were incorporated into the Court Library, of which was then director. After the dissolution of the Jesuit order (1773), the new "Academic Library" was created out of the book collections of the five Lower Austrian Colleges and many duplicates from the Court Library. This was opened on 13 May 1777, the birthday of Maria Theresa of Austria, in the building of the Academic College. Initially, the stock consisted of some 45,000 books and during Emperor Joseph II's dissolution of the monasteries, this was soon considerably extended. In contrast to its antecedents, the new library was open to the general public. Between 1827 and 1829, it acquired the classicist extension (Postgasse 9) to the Academic College, in which it was to be accommodated until 1884. In this year, the main library, with some 300,000 books, moved to 's new Main Building on the Ring, where stacks for some 500,000 volumes had already been prepared. With an annual growth of up to 30,000 volumes, the surplus space was soon filled. Book storage space had to be extended continuously. One hundred years later, the complete library, including departmental and subject libraries, comprised more than 4.3 million volumes. Today, Vienna's University Library is the largest collection of books in Austria, still facing problems of space. In addition to the Main Library, which alone has to cope with an annual growth of 40,000 volumes, it includes three Faculty Libraries, 32 Subject Libraries and 26 Departmental Libraries.

The University of Vienna has the highest ranking in Arts and , where it is placed 35 and 54th in the world according to the and respectively. Outstanding subjects include Geography (ranked 28th globally in 2013), Linguistics and Philosophy (both 46th globally) and Law (ranked 32nd in Europe and 73rd globally). It is rated high in academic reputation and number of international students, but low in terms of faculty to student ratio and citations per faculty. An overview of the by subjects: The by subjects: