Tropical Storm Thelma, known in the Philippines as Tropical Storm Uring, was one of the deadliest tropical cyclones in Philippine history, killing at least 5,081 people. Forming out of a tropical disturbance on November 1, 1991, several hundred kilometers north-northeast of Palau, the depression that would become Thelma tracked generally westward. After turning southwestward in response to a cold front, the system intensified into a tropical storm on November 4 as it approached the Philippines. Hours before moving over the Visayas, Thelma attained its peak intensity with estimated ten-minute sustained winds of 75 km/h (45 mph) and a barometric pressure of 992 mbar (hPa; 29.29 inHg). Despite moving over land, the system weakened only slightly, emerging over the South China Sea on November 6 while retaining gale-force winds. Thelma ultimately succumbed to wind shear and degraded to a tropical depression. On November 8, the depression made landfall in Southern Vietnam before dissipating hours later. While passing over the Philippines, Thelma's interaction with the high terrain of some of the islands resulted in torrential rainfall. Through the process of orographic lift, much of the Visayas received of rain; however, on Leyte Island there was a localized downpour that brought totals to . With the majority of this falling in a three-hour span, an unprecedented flash flood took place on the island. Much of the land had been deforestated or poorly cultivated and was unable to absorb most of the rain, creating a large runoff. This water overwhelmed the Anilao–Malbasag watershed and rushed downstream. Ormoc City, located past where the Anilao and Malbasag rivers converge, suffered the brunt of the flood. In just three hours, the city was devastated with thousands of homes damaged or destroyed. A total of 4,922 people were killed in the city alone, with 2,300 perishing along the riverbank. Outside of Ormoc City, 159 people were killed across Leyte and Negros Occidental. Throughout the country, at least 5,081 people lost their lives while another 1,941–3,084 were missing and presumed dead. This made Thelma the deadliest tropical cyclone in Philippine history, surpassing a storm in 1867 that killed 1,800, until later surpassed by Typhoon Haiyan (Yolanda) in 2013 which killed at least 6,300 people. A total of 4,446 homes were destroyed while another 22,229 were damaged. Total losses amounted to $27.67 million. Initially, it took over 24 hours for word of the disaster to reach officials due to a crippled communication network around Ormoc City. Within a few days, emergency supply centers were established and aid from various agencies under the United Nations and several countries flowed into the country. A total of $5.8 million worth of grants and materials was provided collectively in the international relief effort.

In late October 1991, a tropical disturbance developed near the Caroline Islands. Tracking generally west-northwestward, the system gradually became more defined. On October 31, convection associated with the system quickly increased, prompting the issuance of a Tropical Cyclone Formation Alert from the Joint Typhoon Warning Center (JTWC). Early on November 1, the Japan Meteorological Agency (JMA) began monitoring the system as a tropical depression, at which time the system was situated roughly 415 km (260 mi) north-northeast of Palau. Following a satellite-derived surface wind estimate of 45 km/h (30 mph) later that day, the JTWC also began monitoring the low as a tropical depression. Initially, forecast models showed the system continuing on an arcing path out to sea; however, the system turned westward on November 2 and threatened the Philippines. Due to the cyclone's proximity to the country, the Philippine Atmospheric, Geophysical and Astronomical Services Administration also monitored the storm and assigned it with the local name ''Uring''. Late on November 3, the depression turned west-southwestward towards the Visayas in response to an approaching cold front, an event typical of late-season cyclones in the basin. On November 4, both the JTWC and JMA upgraded the system to a tropical storm, with the former assigning it as ''Thelma''. Hours before striking the Philippines on November 4, both agencies reported Thelma to have reached its peak intensity. The JTWC estimated the storm to have attained one-minute sustained winds of 85 km/h (50 mph) while the JMA estimated ten-minute sustained winds at 75 km/h (45 mph). Additionally, its barometric pressure reached 992 mbar (hPa; 29.29 inHg). Thelma soon made landfall in Samar before weakening to a minimal tropical storm. Maintaining gale-force winds, the system eventually passed over Palawan Island on November 6 before moving over the South China Sea. Despite being back over water, strong wind shear prevented re-intensification and caused Thelma to weaken to a tropical depression by November 7. Now moving westward, the depression eventually made its final landfall over the Mekong River Delta in Southern Vietnam on November 8. Over the next couple of days the system weakened into an area of low pressure as it moved westwards, before it moved into the Andaman Sea during November 10. Once in the Andaman Sea, the systems remnants contributed to the formation of the Karaikal tropical cyclone during the next day.

Tropical Storm Thelma over the Visayas on November 5 Tropical Storm Thelma struck the Philippines just five months after the Ultra-Plinian eruption of Mount Pinatubo. The eruption resulted in the deaths of roughly 800 people and left nearly 1 million homeless. The country's government was reportedly struggling to deal with the scope of the disaster and the addition of Thelma worsened the situation. Striking the nation as a weak tropical storm, winds from Thelma gusted up to 95 km/h (60 mph) in Tacloban; these winds caused no known damage. The main destructive force associated with the cyclone was the tremendous rainfall it produced. More than of rain across much of the Visayas, resulting in widespread flooding. In Tacloban, fell over a 24‑hour span. The heaviest rain occurred on Leyte Island due to orographic lift, which brought large quantities of moisture into the atmosphere over a relatively small area. Additionally, monsoonal winds to the southwest of Thelma converged over the island, further enhancing the precipitation. Near the city of Ormoc, a Philippine National Oil Company rain gauge measured of precipitation, the highest in relation to the storm. Of this, approximately fell during a three-hour span around noon local time on November 5. Initially, residents believed that waterspouts transported tremendous amounts of water to the island, triggering the floods. This notion was quickly dismissed as improbable, however. The hardest hit region was Leyte, where more than 4,000 people lost their lives. A total of 4,446 homes were destroyed while another 22,229 were damaged. The majority of casualties and damage took place in Ormoc when a flash flood devastated the city. At least 81 people were killed outside Ormoc and another 14 went missing; 42 lost their lives in Burauen. The entire island of Leyte was left without power and many areas were isolated as roads were washed away. Another 78 people perished and 70 others were left missing in Negros Occidental. Losses from the storm amounted to $27.67 million; $18.94 million in Leyte and $8.73 million in Negros Occidental. A total of 598,454 people were affected while an estimated 43,000 people were left homeless by the storm across the Philippines. 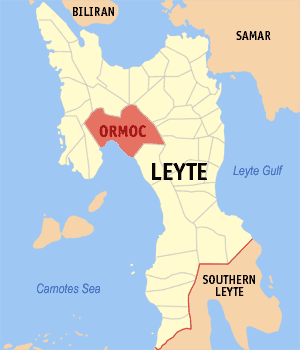 The greatest tragedy during Tropical Storm Thelma took place in the city of Ormoc after torrential rains overwhelmed the Anilao–Malbasag watershed, sending flood waters rushing down the deforested mountainside. This water flowed into the Anilao and Malbasag rivers, located north of Ormoc. The watershed, covering an area of 4,567 hectares (11,285 acres), is only 3.3 percent forested, with the remainder being used for agricultural and private purposes. According to a study in 1990, roughly 90 percent of the watershed had been converted into coconut and sugarcane plantations. The majority of this land was improperly cultivated since the 1970s, making conditions worse than they normally would have been. The natural structure of the mountains further contributed to the floods, with slopes as steep as 60 percent grade in some areas. In heavy rain events, this feature leaves the upper two-thirds of the mountain range unstable. In the two hours prior to the heaviest rains, the soil in the watershed became saturated, greatly lessening its effectiveness at absorbing further rains. As a result, the tremendous rains that occurred just prior to the flood, during which rainfall rates reached per hour, the land was unable to absorb a majority of the rain. Many landslides ranging from deep and wide occurred across the region. Altogether, rains were twice as heavy as the land could handle and the many landslips doubled the volume of fluids. At various points along rivers, temporary dams created by debris, namely trees, allowed a build up of water upstream. In some instances, waters reached a depth of before the dams collapsed. Normally, it takes water in the Anilao and Malbasag rivers roughly 3.6 and 5.6 days, respectively, to reach Ormoc City; however, it only took one hour during the flood. Ormoc City itself is located in a flood-prone area, with the Anilao and Malbasag rivers converging just north of the city and taking a 90-degree turn towards the bay. In addition to the natural dangers of the river, poorly designed structures on the river made conditions worse. The majority of construction along the river did not take flooding threats into account, and actually increased the threat of these events. Concrete walls and levees were built into the river rather than on the banks, leading to faster debris damming. Lastly, just after the turn was the Cogon Bridge. This structure constricted the river by as much as 50 percent, enhancing the build up of water. The turn became the final trigger in the disaster as it created an "instantaneous backwater effect," causing massive volumes of water to over-top the riverbank. Around 11:00 a.m. local time on November 5, approximately 22,835 km3 (5,480 mi3) of water inundated 25 km2 (15.5 mi2) of the city. In just 15 minutes, the water rose by and further rose to within an hour. The flooding lasted for roughly three hours, leaving up to of sediment behind. The flood struck the city with little to no warning, catching all those in its path off-guard. Numerous low-income families lived along the banks of the river, despite being such a high-risk area. Residential and commercial areas were also set up along reclaimed embankments that restricted river flow. Additionally, squatters were allowed to live along the banks of the Anilao river in an area called Isle Verde. Roughly 2,500 people lived on this reclaimed land prior to the flood. The majority of fatalities took place along the banks of the river, with most drowning or being buried in mud or debris. A survivor described the initial event as a gigantic wave crashing over the banks and flooding the city. Isle Verde was virtually wiped out and out of the original 2,500 people that lived there, only 200 survived. It became known as the "Isle of Death" to survivors. Residents reported hundreds of bodies floating down rivers in the area. The force of the water and mud was enough to crack the walls of city hall. Nearly 3,000 homes were destroyed and more than 11,000 others were damaged. In the city alone, officials confirmed that 4,922 people were killed and another 1,857–3,000 were left missing. Additionally, 3,020 people were injured. The majority of those missing were likely swept out to sea by the flood and presumed dead. Two days after the storm, several bodies of those swept out to sea washed back ashore. Officials stated that the death toll could have been in the tens of thousands had the flood occurred at night rather than in the middle of the day.