The Timpanogos (''Timpanog'', Utahs or Utah Indians) were a tribe of Native Americans who inhabited a large part of central Utah—particularly, the area from Utah Lake eastward to the Uinta Mountains and south into present-day Sanpete County. In some accounts they were called the Timpiavat, Timpanogot, Timpanogotzi, Timpannah, Tempenny and other names. During the mid-19th century, when Mormon pioneers entered the territory, the Timpanogos were one of the principal tribes in Utah based on population, area occupied and influence. Scholars have had difficulty identifying (or classifying) their language; most communication was carried out in Spanish or English, and many of their leaders spoke several native dialects of the Numic branch of the Uto-Aztecan language family. The Timpanogos have generally been classified as Ute people. They may have been a Shoshone band, since other Shoshone bands occupied parts of Utah. Nineteenth-century historian Hubert Howe Bancroft wrote in 1882 that the Timpanogos were one of four sub-bands of the Shoshone. Chief Walkara, also known as Chief Walker, was a noted mid-19th-century chief who led his people against Mormon settlers in the Walker War. The Shoshone and Ute shared a common genetic, cultural and linguistic heritage as part of the Numic branch of the Uto-Aztecan language family. Most Timpanogos live on the Uintah Valley Reservation, established by executive order in 1861 and affirmed by congressional legislation in 1864, where they are counted with the Ute Indian Tribe of the Uintah and Ouray Reservation. In 2002, the Timpanogos won a federal case against the state in the Court of Appeals upholding their traditional rights to hunt, fish and gather on the reservation. The court concluded that their relationship with the federal government was well-established, although they are not listed by the Department of the Interior as a federally-recognized tribe. They have submitted an application and documentation to the Department of the Interior seeking federal recognition as an independent tribe. 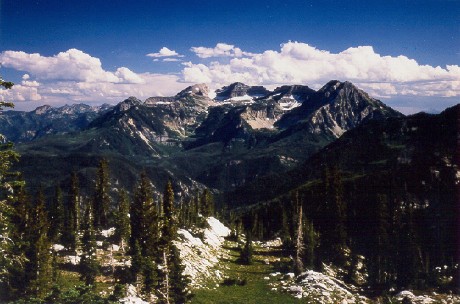 The Timpanogos probably entered Utah as part of the southern Numic expansion around 1000 CE (including the Ute) or in the subsequent central Numic Shoshonean expansion north and west from their Numic homelands in the Sierra Nevada. They were hunter-gatherers, living mostly on fish and wild game caught by the men and cooked and processed by the women and on the seeds and roots of wild plants gathered and prepared by the women. As part of their religion, in the mornings they gathered together and greeted the morning with song to express gratitude to the Creator. They were divided into clans, each with its headman, spiritual leader and warrior. The clans would band together for specific purposes, such as hunting. There was no division of the land, and people were free to travel to different villages. They developed an extensive trading network. The Timpanogos lived in the Wasatch Range around Mount Timpanogos (named after them), along the southern and eastern shores of Utah Lake of the Utah Valley and in Heber Valley, Uinta Basin and Sanpete Valley. The band around Utah Lake became dominant due to the area's food supply. During the spring spawning season at Utah Lake, the tribes hosted an annual fish festival. Timpanogos, Ute and Shoshone bands would come from away to gather fish. At the festival there was dancing, singing, trading, horse races, gambling and feasting. It was an opportunity for young people to find a mate from another clan, since exogamous marriage (outside their clan) was required.