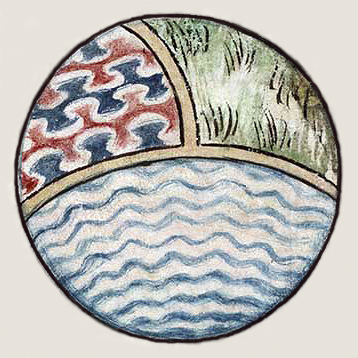 The earliest documented mention of the spherical Earth concept dates from around the 5th century BC, when it appears in the writings of Greek philosophers. In the 3rd century BC, Hellenistic astronomy established the roughly spherical shape of the Earth as a physical fact and calculated the Earth's circumference. This knowledge was gradually adopted throughout the Old World during Late Antiquity and the Middle Ages. A practical demonstration of Earth's sphericity was achieved by Ferdinand Magellan and Juan Sebastián Elcano's circumnavigation (1519–1522). The concept of a spherical Earth displaced earlier beliefs in a flat Earth: In early Mesopotamian mythology, the world was portrayed as a flat disk floating in the ocean with a hemispherical sky-dome above, and this forms the premise for early world maps like those of Anaximander and Hecataeus of Miletus. Other speculations on the shape of Earth include a seven-layered ziggurat or cosmic mountain, alluded to in the Avesta and ancient Persian writings (see seven climes). The realization that the figure of the Earth is more accurately described as an ellipsoid dates to the 17th century, as described by Isaac Newton in ''Principia''. In the early 19th century, the flattening of the earth ellipsoid was determined to be of the order of 1/300 (Delambre, Everest). The modern value as determined by the US DoD World Geodetic System since the 1960s is close to 1/298.25.

The Earth is massive enough that the pull of gravity maintains its roughly spherical shape. Most of its deviation from spherical stems from the centrifugal force caused by rotation around its north-south axis. This force deforms the sphere into an oblate ellipsoid.

The Solar System formed from a dust cloud that was at least partially the remnant of one or more supernovas that created heavy elements by nucleosynthesis. Grains of matter accreted through electrostatic interaction. As they grew in mass, gravity took over in gathering yet more mass, releasing the potential energy of their collisions and in-falling as heat. The protoplanetary disk also had a greater proportion of radioactive elements than the Earth today because, over time, those elements decayed. Their decay heated the early Earth even further, and continue to contribute to Earth's internal heat budget. The early Earth was thus mostly liquid. A sphere is the only stable shape for a non-rotating, gravitationally self-attracting liquid. The outward acceleration caused by the Earth's rotation is greater at the equator than at the poles (where is it zero), so the sphere gets deformed into an ellipsoid, which represents the shape having the lowest potential energy for a rotating, fluid body. This ellipsoid is slightly fatter around the equator than a perfect sphere would be. Earth's shape is also slightly lumpy because it is composed of different materials of different densities that exert slightly different amounts of gravitational force per volume. The liquidity of a hot, newly formed planet allows heavier elements to sink down to the middle and forces lighter elements closer to the surface, a process known as planetary differentiation. This event is known as the iron catastrophe; the most abundant heavier elements were iron and nickel, which now form the Earth's core.

Though the surface rocks of the Earth have cooled enough to solidify, the outer core of the planet is still hot enough to remain liquid. Energy is still being released; volcanic and tectonic activity has pushed rocks into hills and mountains and blown them out of calderas. Meteors also create impact craters and surrounding ridges. However, if the energy release from these processes halts, then they tend to erode away over time and return toward the lowest potential-energy curve of the ellipsoid. Weather powered by solar energy can also move water, rock, and soil to make the Earth slightly out of round. Earth undulates as the shape of its lowest potential energy changes daily due to the gravity of the Sun and Moon as they move around with respect to the Earth. This is what causes tides in the oceans' water, which can flow freely along the changing potential.

Shapes of other bodies 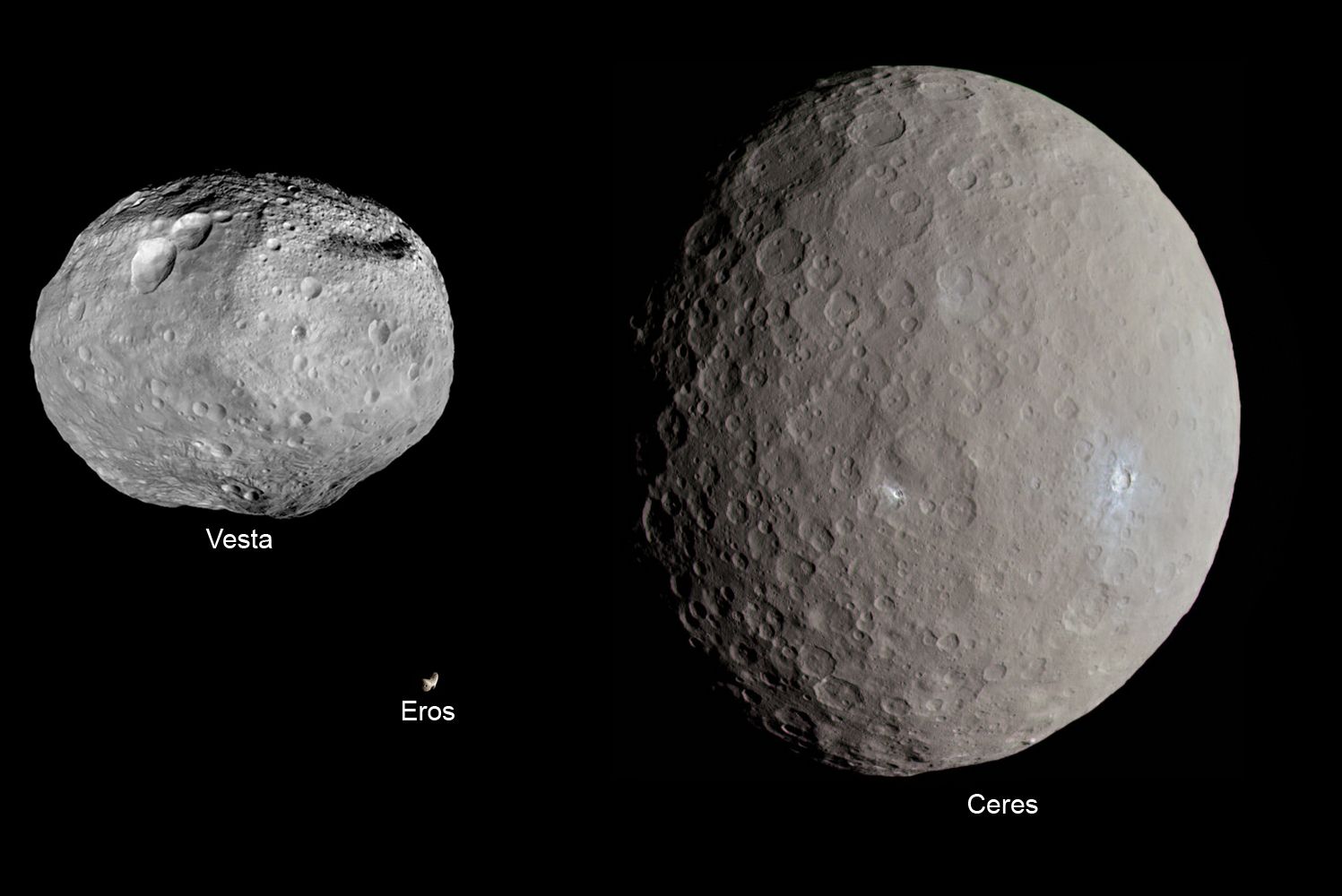 The amorphous nucleus of the comet 67P/Churyumov–Gerasimenko The IAU definitions of planet and dwarf planet require that a Sun-orbiting body has undergone the rounding process to reach a roughly spherical shape, an achievement known as hydrostatic equilibrium. The same spheroidal shape can be seen from smaller rocky planets like Mars to gas giants like Jupiter. Any natural Sun-orbiting body that has not reached hydrostatic equilibrium is classified by the IAU as a small Solar System body (SSB). These come in many non-spherical shapes which are lumpy masses accreted haphazardly by in-falling dust and rock; not enough mass falls in to generate the heat needed to complete the rounding. Some SSSBs are just collections of relatively small rocks that are weakly held next to each other by gravity but are not actually fused into a single big bedrock. Some larger SSSBs are nearly round but have not reached hydrostatic equilibrium. The small Solar System body 4 Vesta is large enough to have undergone at least partial planetary differentiation. Stars like the Sun are also spheroidal due to gravity's effects on their plasma, which is a free-flowing fluid. Ongoing stellar fusion is a much greater source of heat for stars compared to the initial heat released during formation.

The roughly spherical shape of the Earth can be confirmed by many different types of observation from ground level, aircraft, and spacecraft. The shape causes a number of phenomena that a flat Earth would not. Some of these phenomena and observations would be possible on other shapes, such as a curved disk or torus, but no other shape would explain all of them.

On a flat Earth without obstructions, the ground itself would never obscure distant objects; one would be able to see all the way to the edge of the world. A spherical surface has a horizon which is closer when viewed from a lower altitude.