In geometry, a sphere packing is an arrangement of non-overlapping spheres within a containing space. The spheres considered are usually all of identical size, and the space is usually three-dimensional Euclidean space. However, sphere packing problems can be generalised to consider unequal spheres, spaces of other dimensions (where the problem becomes circle packing in two dimensions, or hypersphere packing in higher dimensions) or to non-Euclidean spaces such as hyperbolic space. A typical sphere packing problem is to find an arrangement in which the spheres fill as much of the space as possible. The proportion of space filled by the spheres is called the density of the arrangement. As the local density of a packing in an infinite space can vary depending on the volume over which it is measured, the problem is usually to maximise the average or asymptotic density, measured over a large enough volume. For equal spheres in three dimensions, the densest packing uses approximately 74% of the volume. A random packing of equal spheres generally has a density around 64%. 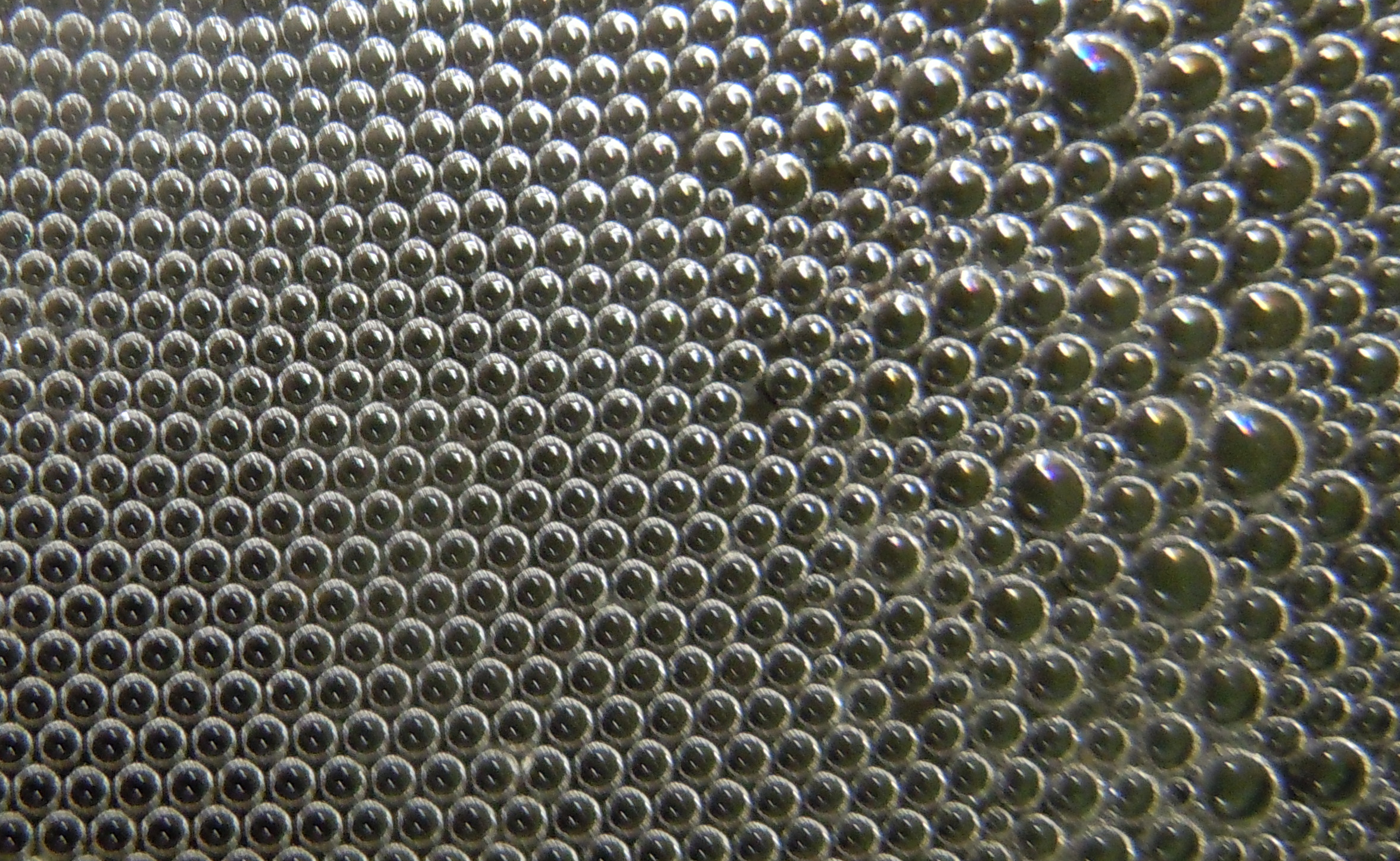 160px|Two ways to stack three planes made of spheres

In three-dimensional Euclidean space, the densest packing of equal spheres is achieved by a family of structures called close-packed structures. One method for generating such a structure is as follows. Consider a plane with a compact arrangement of spheres on it. Call it A. For any three neighbouring spheres, a fourth sphere can be placed on top in the hollow between the three bottom spheres. If we do this for half of the holes in a second plane above the first, we create a new compact layer. There are two possible choices for doing this, call them B and C. Suppose that we chose B. Then one half of the hollows of B lies above the centers of the balls in A and one half lies above the hollows of A which were not used for B. Thus the balls of a third layer can be placed either directly above the balls of the first one, yielding a layer of type A, or above the holes of the first layer which were not occupied by the second layer, yielding a layer of type C. Combining layers of types A, B, and C produces various close-packed structures. Two simple arrangements within the close-packed family correspond to regular lattices. One is called cubic close packing (or face-centred cubic, "FCC")—where the layers are alternated in the ABCABC... sequence. The other is called hexagonal close packing ("HCP")—where the layers are alternated in the ABAB... sequence. But many layer stacking sequences are possible (ABAC, ABCBA, ABCBAC, etc.), and still generate a close-packed structure. In all of these arrangements each sphere touches 12 neighboring spheres, and the average density is : Carl Friedrich Gauss proved in 1831 that these packings have the highest density amongst all possible lattice packings. In 1611 Johannes Kepler conjectured that this is the maximum possible density amongst both regular and irregular arrangements—this became known as the Kepler conjecture. In 1998, Thomas Callister Hales, following the approach suggested by László Fejes Tóth in 1953, announced a proof of the Kepler conjecture. Hales' proof is a proof by exhaustion involving checking of many individual cases using complex computer calculations. Referees said that they were "99% certain" of the correctness of Hales' proof. On 10 August 2014 Hales announced the completion of a formal proof using automated proof checking, removing any doubt.

Jammed packings with a low density

Packings where all spheres are constrained by their neighbours to stay in one location are called rigid or jammed. The strictly jammed sphere packing with the lowest density is a diluted ("tunneled") fcc crystal with a density of only 0.49365.

If we attempt to build a densely packed collection of spheres, we will be tempted to always place the next sphere in a hollow between three packed spheres. If five spheres are assembled in this way, they will be consistent with one of the regularly packed arrangements described above. However, the sixth sphere placed in this way will render the structure inconsistent with any regular arrangement. This results in the possibility of a ''random close packing'' of spheres which is stable against compression. Vibration of a random loose packing can result in the arrangement of spherical particles into regular packings, a process known as granular crystallisation. Such processes depend on the geometry of the container holding the spherical grains.