The Second EDSA Revolution, also known as People Power Revolution II, EDSA 2001, and EDSA II (pronounced as ''EDSA Two'' or ''EDSA Dos''), was a political protest from January 17–20, 2001 that peacefully overthrew the government of Joseph Estrada, the thirteenth President of the Philippines. Estrada resigned and was succeeded by his Vice President, Gloria Macapagal Arroyo, who was sworn into office by then-Chief Justice Hilario Davide Jr. at around noon on January 20, 2001, several hours before Estrada fled Malacañang Palace. EDSA is an acronym derived from Epifanio de los Santos Avenue, the major thoroughfare connecting five cities in Metro Manila, namely Pasay, Makati, Mandaluyong, Quezon City, and Caloocan, with the revolution's epicenter at the EDSA Shrine church at the northern tip of Ortigas Center, a business district. Advocates described EDSA II as "popular", but critics view the uprising as a conspiracy among political and business elites, military top brass, and Catholic Cardinal Jaime Sin. International reaction to the revolt was mixed, with some foreign nations including the United States immediately recognising the legitimacy of Arroyo's presidency, and foreign commentators describing it as "a defeat for due process of law", "mob rule", and a "''de facto'' coup". The only means of legitimizing the event was the last-minute Supreme Court ruling that "the welfare of the people is the supreme law." But by then, the Armed Forces of the Philippines had already withdrawn support for the president, which some analysts called unconstitutional, and most foreign political analysts agreeing with this assessment. William Overholt, a Hong Kong-based political economist said that "It is either being called mob rule or mob rule as a cover for a well-planned coup, ... but either way, it's not democracy." Opinion was divided during EDSA II about whether Gloria Macapagal-Arroyo as the incumbent vice president should be president if Joseph Estrada was ousted; many groups who participated in EDSA II expressly stated that they did not want Arroyo for president either, and some of them would later participate in EDSA III. The prevailing Constitution of the Philippines calls for the Vice President of the Philippines, Arroyo at the time, to act as interim president only when the sitting president dies, resigns, or becomes incapacitated, none of which occurred during EDSA II. 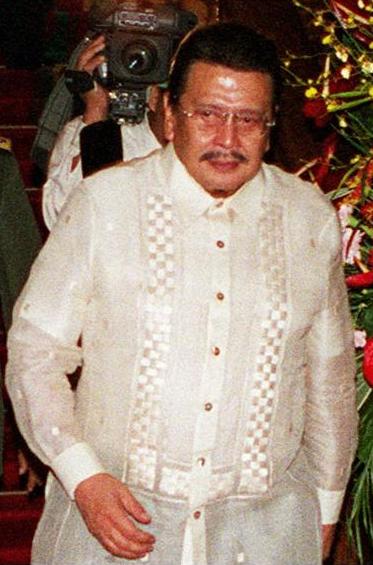 On October 4, 2000, Ilocos Sur Governor Luis "Chavit" Singson, a longtime friend of President Joseph Estrada, went public with accusations that Estrada, his family and friends received millions of pesos from operations of the illegal numbers game, ''jueteng''. The exposé immediately ignited reactions of rage. The next day, Senate Minority Leader Teofisto Guingona, Jr. delivered a fiery privilege speech accusing Estrada of receiving P220 million in jueteng money from Governor Singson from November 1998 to August 2000, as well as taking P70 million-worth of excise tax money from cigarettes intended for Ilocos Sur. The privilege speech was referred by Senate President Franklin Drilon, to the Blue Ribbon Committee and the Committee on Justice for joint investigation. Another committee in the House of Representatives decided to investigate the exposé, while other House members spearheaded a move to impeach the president. More calls for resignation came from Manila Cardinal Archbishop Jaime Sin, the Catholic Bishops Conference of the Philippines, former Presidents Corazon Aquino and Fidel Ramos, and Vice President Gloria Macapagal-Arroyo (who had resigned her cabinet position of Secretary of the Department of Social Welfare and Development). Cardinal Sin stated in a statement, "In the light of the scandals that besmirched the image of presidency, in the last two years, we stand by our conviction that he has lost the moral authority to govern." More resignations came from Estrada's cabinet and economic advisers, and other members of congress defected from his ruling party. On November 13, 2000, the House of Representatives led by Speaker Manuel Villar transmitted the Articles of Impeachment, signed by 115 representatives, to the Senate. This caused shakeups in the leadership of both houses of congress. The impeachment trial was formally opened on November 20, with twenty-one senators taking their oaths as judges, and Supreme Court Chief Justice Hilario Davide, Jr. presiding. The trial began on December 7. The day-to-day trial was covered on live television and received the highest viewing rating, mostly by the broadcasting giant ABS-CBN at the time. Among the highlights of the trial was the testimony of Clarissa Ocampo, senior vice president of Equitable PCI Bank, who testified that she was one foot away from Estrada when he signed the name "Jose Velarde" documents involving a P500 million investment agreement with their bank in February 2000.

Estrada was a popular actor-turned politician who ran under the slogan "''Erap para sa mahirap''," or "Erap for the poor" (referring to Estrada's nickname “Erap”). He was accused of receiving PHP 10 million monthly as protection money from gambling lords from November 1998 to August 2000 while he was president. He also allegedly received PHP 130 million in kickbacks released by then budget secretary Benjamin Diokno for tobacco farmers, while his wife Loi Ejercito's foundation allegedly received P100 million "to the detriment of regular beneficiaries." Estrada was also accused of misusing 52 smuggled luxury vehicles, nepotism, and he allegedly hid assets and bought mansions for his mistresses. An impeachment trial against Estrada began in the Philippine Senate on December 7, 2000. Trial proceedings ended on January 16, 2001, after the trial jury decided not to examine evidence relating to Estrada's alleged secret bank account. After the breakdown of the impeachment trial, protesters assembled on EDSA, Metro Manila's main thoroughfare, "in scenes reminiscent of the 1986 uprising which ousted the former dictator Ferdinand Marcos."

On January 16, 2001, the impeachment trial of President Estrada moved to the investigation of an envelope containing crucial evidence that would allegedly prove acts of political corruption by Estrada. Senators allied with Estrada moved to block the evidence. The conflict between the senator-judges and the prosecution became deeper, but then-Senate Majority Floor Leader Francisco Tatad requested that the impeachment court have a vote on opening the second envelope. The vote resulted in 10 senators in favor of examining the evidence, and 11 senators in favor of suppressing it. The list of senators who voted for the second envelope are as follows: After the vote, Sen. Aquilino Pimentel, Jr. resigned as Senate President and walked out of the impeachment proceedings together with the nine opposition senators and 11 prosecutors in the Estrada impeachment trial. The 11 administration senators who voted to block the opening of the second envelope remained in the Senate session hall together with members of the defense panel. The phrase "''Joe's Cohorts''" quickly surfaced as a mnemonic device for remembering their names (Joe's Cohorts: Jaworski, Oreta, Enrile, Santiago, Coseteng, Osmeña, Honasan, Ople, Revilla, Tatad, Sotto). In February 2001, at the initiative of Senate President Aquilino Pimentel, Jr., the second envelope was opened before the local and foreign media. It contained the document that stated that Jaime Dichavez and not Estrada owned the "Jose Velarde" account.

All 11 prosecutors in the Estrada impeachment trial resigned. Sen. Tessie Aquino-Oreta, one of three senators who voted against opening the envelope (a "NO" vote), was seen on national television; most assumed that she was dancing joyfully as the opposition walked out. This further fuelled the growing anti-Erap sentiments of the crowd gathered at EDSA Shrine, and she became the most vilified of the 11 senators. She was labeled a "prostitute" and a "concubine" of Erap for her dancing act, while Sen. Defensor-Santiago was also ridiculed by the crowd who branded her a "lunatic". As he did in the EDSA I protests, Cardinal Jaime Sin called on the people to join the rally at the shrine. During the night, people began to gather in large numbers around the shrine.

The crowd continues to grow, bolstered by students from private schools and left-wing organizations. Activists from the group Bayan and Akbayan as well as lawyers of the Integrated Bar of the Philippines and other bar associations joined in the thousands of protesters. A similar parallel anti-Estrada rally was held in Makati, and at the shrine area, just as in 1986, stars and icons from the music industry entertained the vast crowds.

The Philippine National Police and the Armed Forces of the Philippines withdraw their support for Estrada, joining the crowds at the EDSA Shrine. At 2:00 PM, Joseph Estrada appears on television for the first time since the beginning of the protests and maintains that he will not resign. He says he wants the impeachment trial to continue, stressing that only a guilty verdict will remove him from office. At 6:15 PM, Estrada again appears on television, calling for a snap presidential election to be held concurrently with congressional and local elections on May 14, 2001. He adds that he will not run in this election.

At exactly 1:30 in the afternoon, Gloria Macapagal-Arroyo takes her oath of office in the presence of the crowd at EDSA, becoming the 14th president of the Philippines. At the same time, however, a large anti-Estrada crowd had already gathered at the historic Mendiola Bridge, having left the shrine earlier in the day, only to face PNP personnel and the pro-Estrada supporters behind them, who had by now already attacked both the police and the anti-Estrada protesters and heckling them and even members of the press. At 2:00 PM, Estrada releases a letter saying he had "strong and serious doubts about the legality and constitutionality of her proclamation as president". In that same letter, however, he says he would give up his office to allow for national reconciliation. Later, Estrada and his family evacuate Malacañang Palace on a boat along the Pasig River. They are smiling and waving to reporters and shaking hands with the remaining Cabinet members and palace employees. He was initially placed under house arrest in San Juan, but was later transferred to his rest home in Sampaloc, a small village in Tanay, Rizal.

On the last day of protests on EDSA on January 20, 2001, Estrada resigned as president and his successor Gloria Macapagal-Arroyo was sworn into office by Supreme Court Chief Justice Hilario G. Davide Jr. On September 12, 2007, Estrada was found guilty of plunder beyond reasonable doubt by the Philippine anti-graft court and sentenced to life imprisonment. He was pardoned by Macapagal-Arroyo on October 25, 2007.

World reaction to the administration change was mixed. Though foreign nations, including the United States, immediately expressed recognition of the legitimacy of Arroyo's presidency, foreign commentators described the revolt as "a defeat for due process of law", "mob rule", and a "''de facto'' coup". On January 18, 2008, Joseph Estrada's Pwersa ng Masang Pilipino (PMP) caused full-page advertisement in Metro Manila newspapers, blaming EDSA 2 of having "inflicted a dent on Philippine democracy". It featured clippings questioned the constitutionality of the revolution. The published featured clippings were taken from ''Time'', ''The New York Times'', ''The Straits Times'', ''The Los Angeles Times'', ''The Washington Post'', ''Asia Times Online'', ''The Economist'', and ''International Herald Tribune''. Supreme Court justice Cecilia Muñoz Palma opined that EDSA 2 violated the 1987 Constitution. In February 2008 parts of the Catholic Church that played a vital role during EDSA II issued a sort of apology. The sitting Catholic Bishops Conference of the Philippines (CBCP) president, Iloilo Archbishop Angel Lagdameo expressed disappointment in Mrs. Arroyo, saying that the event which has become known as EDSA II, installed a president who was reported in February 2008 by the Philippine newspaper ''The Daily Tribune'' as "... now being adjudged in surveys as the country's 'most corrupt' leader". On March 13, 2008, Joseph Estrada named Lucio Tan, Jaime Sin, Fidel Ramos, Luis Singson, and the Ayala and Lopez clans (who were both involved in water businesses) as co-conspirators of EDSA Revolution of 2001. In October 2016, Estrada claimed that it was the U.S. that ousted him from office.