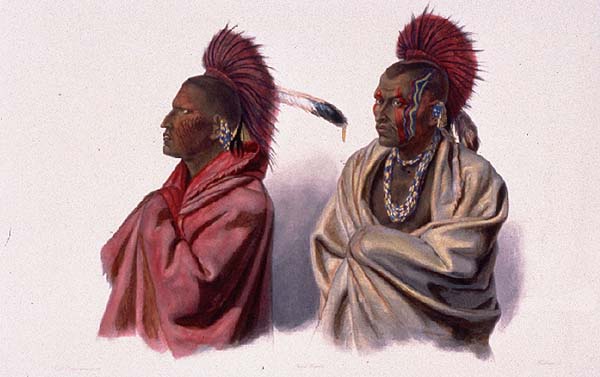 The Sac or Sauk are a group of Native Americans of the Eastern Woodlands culture group, who lived primarily in the region of what is now Green Bay, Wisconsin, when first encountered by the French in 1667. Their autonym is oθaakiiwaki, and their exonym is Ozaagii(-wag) in Ojibwe. The latter name was transliterated into French and English by colonists of those cultures. Today they have three federally recognized tribes, together with the Meskwaki (Fox), located in Iowa, Oklahoma and Kansas.

About this time, one group of Sac moved into Missouri, and later to Kansas and Nebraska. In 1869, after the Civil War, the United States forced the larger group of Sac to move into a reservation in Indian Territory (now the state of Oklahoma). They merged with the Meskwaki as the federally recognized Sac and Fox Nation. (The United States had been making treaties with the two tribes together since their residency in the Midwest.) A smaller number returned to the Midwest from Oklahoma (or resisted leaving.) They joined the Mesquakie at the Mesqwaki Settlement, Iowa. The land currently occupied by the Sauk is only a section of what used to be the Sac and Fox Reservation during the time of 1867–1891. This reservation was established by the U.S. and spanned 480,000 acres. In 1887, however, the Dawes Act failed to recognize Native American culture by dividing the reservation into small allotments designated for individual households. The remainder of land not allotted to the Sac and Fox was then sold to non-Native settlers in an attempt to gain Oklahoma statehood and the full assimilation of its Native American population. By 1889, 519 of the tribe were located in Indian Territory, what is now central Oklahoma. On June 10, 1890, they ceded these Indian Territory lands to the federal government.

The Sauk and Fox peoples were divided into two moieties or "divisions", which in turn were subdivided into Patri-lineages and Clans as local subgroups (segments). The moieties were known as the ''Kishko/Ki-sko-ha/Kîshkôha'' (male: ''Kîshkôha'', female: ''Kîshkôhkwêha'') ("the long-haired") and as the ''Oskush/Askasa/Shkasha'' (male: ''Shkasha/Oshkashîwiwa'', female: ''Shkashîhkwêwa/Oshkashîhkwêwiwa'') ("the brave"). The two moieties were each symbolized by two colors: The ''Askasa/Shkasha'' painted their faces and partly their bodies with charcoal in ''mahkatêwâwi'' (black) and the ''Ki-sko-ha/Kîshkôha'' painted their bodies with white clay in ''wâpeshkyâwi'' (white). This duality was also celebrated by the two moieties in Lacrosse, which was often played extremely brutally to toughen young warriors for combat, for recreation, as part of festivals, and used as preparation for imminent wars or raids. This division has survived to the present day, but is now more related to the political system of the United States: the supporters of the Democratic Party are associated with the ''Kîshkôha/Kîshkôhkwêha'', while the supporters of the Republican Party are associated with the ''Shkasha/Shkashîhkwêwa''. Originally, the Sauk had a patrilineal and exogamous clan system, in which descent and inheritance was traced through the father. Clans or ''Mîthonî'' distinguished and named on the basis of totem animals, which are: ''Mahkwithowa'' (Bear Clan), ''Amehkwithowa'' (Beaver Clan), ''Peshekethiwithowa'' (Deer Clan), ''Ketiwithowa / Mekethiwithowa'' (Eagle Clan), ''Nemêthithowa'' (Fish Clan), ''Wâkoshêhithowa'' (Fox Clan), ''Kehchikamîwithowa'' (Ocean/Sea/Great Lake Clan), ''Keshêhokimâwithowa'' (Peace Clan), ''Ahpenîthowa'' (Potato Clan), ''Akônithowa'' (Snow Clan), ''Nenemehkiwithowa'' (Thunder Clan), ''Manethenôkimâwithowa'' (Warrior Clan), and ''Mahwêwithowa'' (Wolf Clan). Saukenuk or Saukietown (today: Black Hawk State Historic Site) near the mouth of the Rock River (''Sinnissippi'' – "rocky waters") into the Mississippi (''Mäse'sibowi'' – "great river"), the most important Sauk settlement in the 18th and 19th centuries with about 4,000 inhabitants, was divided into 12 districts, which were assigned to the respective clans. The tribe was governed by a council of sacred clan chiefs, a war chief, the head of families, and the warriors. Chiefs were recognized in three categories: civil, war, and ceremonial. Only the civil chiefs were hereditary. The other two chiefs were recognized by bands after they demonstrated their ability or spiritual power. This traditional manner of selecting historic clan chiefs and governance was replaced in the 19th century by the United States appointing leaders through their agents at the Sac and Fox Agency, or reservation in Indian Territory (now Oklahoma). In the 20th century, the tribe adopted a constitutional government patterned after the United States form. They elect their chiefs.

Sauk is one of the many Algonquian languages. It is very closely related to the varieties spoken by the Meskwaki and the Kickapoo tribes; linguists often describe these three as dialects of the same language. Each of the dialects contains archaisms and innovations that distinguish them from each other. Sauk and Meskwaki appear to be the most closely related of the three, reflecting the peoples' long relationship. Sauk is considered to be mutually intelligible, to a point, with Fox. In their own language, the Sauk at one time called themselves ''asakiwaki'' -'sak-i-wa-ki "people of the outlet". The Sauk people have a syllabic orthography for their language. They published a Primer Book in 1975, based on a "traditional" syllabary that existed in 1906. It is intended to help modern-day Sauk to learn to write and speak their ancestral tongue. A newer orthography was proposed around 1994 to aid in language revival. The former syllabary was aimed at remaining native speakers of Sauk; the more recent orthography was developed for native English speakers, as many Sauk grow up with English as their first language (Reinschmidt 1994). Sauk has so few speakers that it is considered an endangered language, as are numerous others native to North America. In 2005, ''A Concise Dictionary of the Sauk Language'' was published using the Algonquianist Standard Roman Orthography. In 2012, Shawnee High School in Shawnee, Oklahoma, began to offer a Sauk language course.

Use of Sauk as the official tribal language in everyday communication declined rapidly between 1935 and 1945. The chances of coming across a tribal member who can understand basic phrases of Sauk is small, due to the fact that the main language spoken by the Sac and Fox today is English. The loss of Sauk, as with many other Native American languages, lies in context with American history. Speaking in the native language was actively discouraged and often punished in Indian boarding schools during the late 19th and early 20th century, when the U.S. was attempting to assimilate Native Americans into European-American culture. Another conflict for the preservation of the language, is that the original syllabary created was intended for the use of native Sauk speakers, and its clarification was designed from the Sauk language. This is a problem because this is no longer as helpful for the majority of the Sac and Fox nation, as the official tribe language today is English. The issue arises in instances when Sauk is being taught to a school in the tribe, and an elder, who is fluent in the language, disagrees with the pronunciation being taught.

Sauk does not have many phonemes in comparison to many other languages: four vowels, two semivowels, and nine consonants.

Vowel length is important in the Sauk language because of its distinctive function. Long vowels are often distinguished by the doubling of characters, such as ''a / aa'' representing two different spoken lengths. This is different for the vowel ''e'', as an elongated version of this vowel shares the sound of the vowel in the English word ''bear''. Reinschmidt presents four vowels, each with two allophones: :: → :: → :: → :: →

Pitch and tone are important when speaking Sauk, as there is a general rule of emphasizing the first or second syllable of phrases, and slowly fades away by the end of a word. The Sauk language is perceived as having a "swallowed" quality when referring to the ends of phrases and words, so pitch, tone and intonation is a concept that would come from learning the language as opposed to studying the syllabary.

Both the Sauk and Fox languages are known for "swallowing" syllables in word-final position, which can make identification of individual sounds more difficult for the language learner.

Sauk is a polysynthetic language. Because this can easily pose great difficulties to learners with little to no experience with highly synthetic languages, the Sauk orthography has words written by identifying each syllable.

Lake Osakis in west-central Minnesota, the Sauk River, which flows from Lake Osakis, and the towns of Osakis, Sauk Centre, and Sauk Rapids all were named for association historically with a small party of Sac who made camp on the shores of Lake Osakis. They had been banished from their tribe for murder. According to Anishinaabe oral tradition, these five Sac were killed by local Dakota in the late 18th century. Place names with "Sauk" references include: *Iowa: Sac City, Sac County, and Sac Township. *Illinois: Sauk Village; Sauk Valley: the cities of Dixon, Sterling, Rock Falls and the surrounding area; Sauk Trail, a winding road south of Chicago, said to follow an old Indian trail
Johnson-Sauk Trail State Recreation Area
and Black Hawk College oline and Kewanee, IL *Michigan: The name of Saginaw is believed to mean "where the Sauk were" in Ojibwe; and the Saginaw Trail is said to follow an ancient Native American trail. US Route 12 in Michigan is said to follow the Sauk Native American trail. *Minnesota: City of Sauk Centre, Le Sauk and Little Sauk townships, Lake Osakis, Sauk River, Sauk Rapids. *Missouri: Sac Township, Sac River and Little Sac River of southwest Missouri *North Dakota: Sauk Prairie and Sauk Valley Township *Wisconsin: Prairie du Sac, Sauk City, Saukville, Sauk County and Ozaukee County