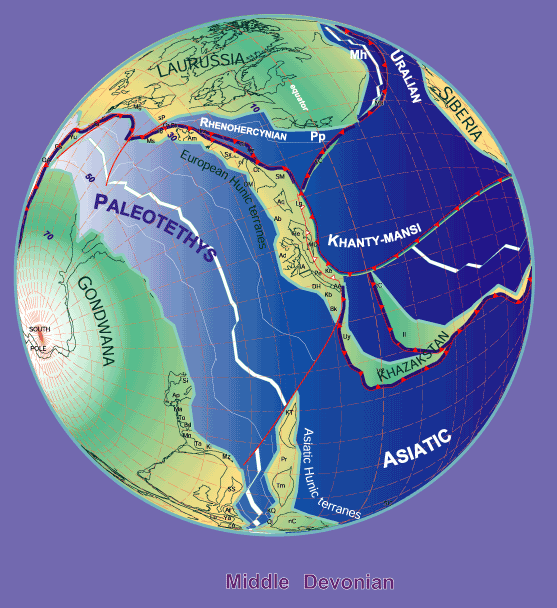 The Paleo-Tethys or Palaeo-Tethys Ocean was an ocean located along the northern margin of the paleocontinent Gondwana that started to open during the Middle Cambrian, grew throughout the Paleozoic, and finally closed during the Late Triassic; existing for about 400 million years. Paleo-Tethys was a precursor to the Tethys Ocean (also called the Neo-Tethys) which was located between Gondwana and the Hunic terranes (continental fragments that broke-off Gondwana and moved north). It opened as the Proto-Tethys Ocean subducted under these terranes and closed as the Cimmerian terranes (that also broke-off Gondwana and moved north) gave way to the Tethys Ocean. Confusingly, the Neo-Tethys is sometimes defined as the ocean south of a hypothesised mid-ocean ridge separating Greater Indian from Asia, in which case the ocean between Cimmeria and this hypothesised ridge is called the Meso-Tethys, i.e. the "Middle-Tethys". The so-called Hunic terranes are divided into the ''European Hunic'' (today the crust under parts of Europe – called Armorica – and Iberia) and ''Asiatic Hunic'' (today the crust of parts of southern Asia). A large transform fault separated the two terranes. The role the Paleo-Tethys played in the supercontinent cycle, and especially the break-up of Pangaea, is unresolved. Some geologists argue that the opening of the North Atlantic was triggered by the subduction of Panthalassa under the western margins of the Americas while other argue that the closure of the Paleo-Tethys and Tethys resulted in the break-up. In the first scenario, mantle plumes caused the opening of the Atlantic and the break-up of Pangaea and the closure of the Tethyan domain was one of the consequences of this process; in the other scenario, the longitudinal forces that closed the Tethyan domain were transmitted latitudinally in what is today the Mediterranean region, resulting in the initial opening of the Atlantic.


Late Carboniferous Map
- at ''PaleoMap Project''; a good picture of Paleo-Tethys Ocean before the Cimmerian Plate moves northward.
Paleo-Tethys and Proto-Tethys
- a