The North Atlantic Treaty Organization (NATO, ; french: Organisation du traité de l'Atlantique nord, ), also called the North Atlantic Alliance, is an intergovernmental military alliance between 30 member states – 28 European and two North American. Established in the aftermath of World War II, the organization implemented the North Atlantic Treaty, signed in Washington, D.C., on 4 April 1949. NATO is a collective security system: its independent member states agree to defend each other against attacks by third parties. During the
Cold War The Cold War is a term commonly used to refer to a period of Geopolitics, geopolitical tension between the United States and the Soviet Union and their respective allies, the Western Bloc and the Eastern Bloc. The term ''Cold war (term), co ...
, NATO operated as a check on the perceived threat posed by the
Soviet Union The Soviet Union,. officially the Union of Soviet Socialist Republics. (USSR),. was a transcontinental country that spanned much of Eurasia from 1922 to 1991. A flagship communist state, it was nominally a federal union of fifteen nati ...
. The alliance remained in place after the
dissolution of the Soviet Union The dissolution of the Soviet Union, also negatively connoted as rus, Разва́л Сове́тского Сою́за, r=Razvál Sovétskogo Soyúza, ''Ruining of the Soviet Union''. was the process of internal disintegration within the Sov ...
and has been involved in military operations in the
Balkans The Balkans ( ), also known as the Balkan Peninsula, is a geographical area in southeastern Europe Europe is a large peninsula conventionally considered a continent in its own right because of its great physical size and the weig ...
, the
Middle East The Middle East ( ar, الشرق الأوسط, ISO 233: ) is a geopolitical region commonly encompassing Arabia (including the Arabian Peninsula and Bahrain), Asia Minor (Asian part of Turkey Turkey ( tr, Türkiye ), officia ...
,
South Asia South Asia is the southern subregion of Asia Asia (, ) is one of the world's most notable geographical regions, which is either considered a continent in its own right or a subcontinent of Eurasia, which shares the continental l ...
, and Africa. The organization's motto is '' animus in consulendo liber'' (Latin for "a mind unfettered in deliberation"). NATO's main headquarters are located in Brussels, Belgium, while NATO's military headquarters are near Mons, Belgium. The alliance has targeted its NATO Response Force deployments in Eastern Europe, and the combined militaries of all NATO members include around 3.5 million soldiers and personnel. Their combined military spending constituted over 57 percent of the global nominal total. Moreover, members have agreed to reach or maintain the target defence spending of at least two percent of their GDP by 2024. NATO formed with twelve founding members and has added new members eight times, most recently when
North Macedonia North Macedonia, ; sq, Maqedonia e Veriut, (Macedonia before February 2019), officially the Republic of North Macedonia,, is a country in Southeast Europe. It gained independence in 1991 as one of the successor states of Socialist Feder ...
joined the alliance in March 2020. Following the acceptance of their applications for membership in June 2022,
Finland Finland ( fi, Suomi ; sv, Finland ), officially the Republic of Finland (; ), is a Nordic country in Northern Europe. It shares land borders with Sweden Sweden, formally the Kingdom of Sweden,The United Nations Group of Exper ...
and
Sweden Sweden, formally the Kingdom of Sweden,The United Nations Group of Experts on Geographical Names states that the country's formal name is the Kingdom of SwedenUNGEGN World Geographical Names, Sweden./ref> is a Nordic country located on ...
are anticipated to become the 31st and 32nd members, with their Accession Protocols to the North Atlantic Treaty now in the process of being ratified by the existing members. In addition, NATO currently recognizes
Bosnia and Herzegovina Bosnia and Herzegovina ( sh, / , ), abbreviated BiH () or B&H, sometimes called Bosnia–Herzegovina and often known informally as Bosnia, is a country at the crossroads of south and southeast Europe, located in the Balkans. Bosnia and ...
, Georgia, and
Ukraine Ukraine ( uk, Україна, Ukraïna, ) is a country in Eastern Europe. It is the second-largest European country after Russia Russia (, , ), or the Russian Federation, is a transcontinental country spanning Eastern Europe and ...
as aspiring members. Enlargement has led to tensions with non-member
Russia Russia (, , ), or the Russian Federation, is a transcontinental country spanning Eastern Europe and Northern Asia. It is the largest country in the world, with its internationally recognised territory covering , and encompassing one-ei ...
, one of the twenty additional countries participating in NATO's Partnership for Peace programme. Another nineteen countries are involved in institutionalized dialogue programmes with NATO.

The Treaty of Dunkirk was signed by
France France (), officially the French Republic ( ), is a country primarily located in Western Europe. It also comprises of Overseas France, overseas regions and territories in the Americas and the Atlantic Ocean, Atlantic, Pacific Ocean, Pac ...
and the
United Kingdom The United Kingdom of Great Britain and Northern Ireland, commonly known as the United Kingdom (UK) or Britain, is a country in Europe, off the north-western coast of the European mainland, continental mainland. It comprises England, Scotlan ...
on 4 March 1947, during the aftermath of World War II and the start of the Cold War, as a ''Treaty of Alliance and Mutual Assistance'' in the event of possible attacks by Germany or the
Soviet Union The Soviet Union,. officially the Union of Soviet Socialist Republics. (USSR),. was a transcontinental country that spanned much of Eurasia from 1922 to 1991. A flagship communist state, it was nominally a federal union of fifteen nati ...
. In March 1948, this alliance was expanded in the Treaty of Brussels to include the
Benelux The Benelux Union ( nl, Benelux Unie; french: Union Benelux; lb, Benelux-Unioun), also known as simply Benelux, is a politico- economic union and formal international intergovernmental cooperation of three neighboring states in western Europe ...
countries, forming the Brussels Treaty Organization, commonly known as the Western Union. Talks for a wider military alliance, which could include North America, also began that month in the
United States The United States of America (U.S.A. or USA), commonly known as the United States (U.S. or US) or America, is a country primarily located in North America. It consists of 50 states, a federal district, five major unincorporated territor ...
, where their foreign policy under the Truman Doctrine promoted international solidarity against actions they saw as communist aggression, such as the February 1948 coup d'état in Czechoslovakia. These talks resulted in the signature of the North Atlantic Treaty on 4 April 1949 by the member states of the Western Union plus the United States, Canada, Portugal, Italy, Norway, Denmark, and Iceland. Canadian diplomat Lester B. Pearson was a key author and drafter of the treaty. 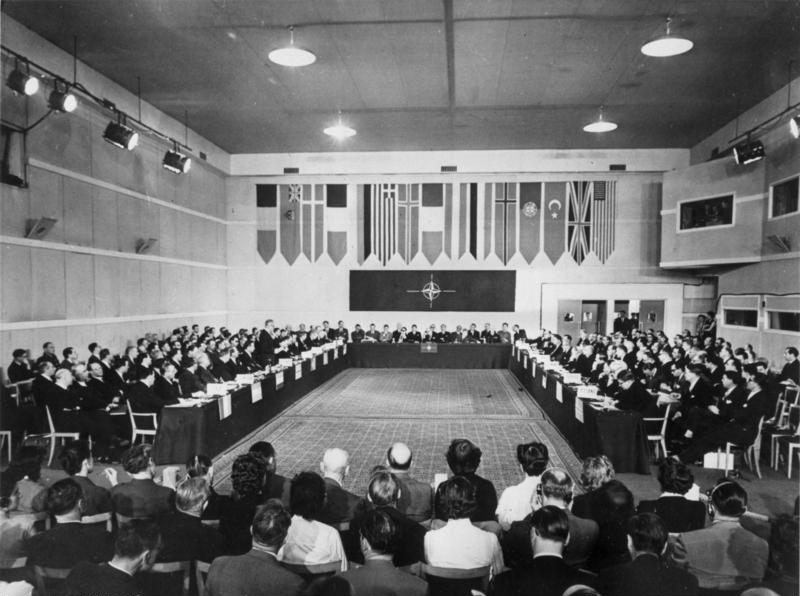 In the 1990s, the organization extended its activities into political and humanitarian situations that had not formerly been NATO concerns. During the Breakup of Yugoslavia, the organization conducted its first military interventions in Bosnia from 1992 to 1995 and later Yugoslavia in 1999. These conflicts motivated a major post-Cold War military restructuring. NATO's military structure was cut back and reorganized, with new forces such as the Headquarters Allied Command Europe Rapid Reaction Corps established. Politically, the organization sought better relations with the newly autonomous Central and Eastern European states, and diplomatic forums for regional cooperation between NATO and its neighbours were set up during this post-Cold War period, including the Partnership for Peace and the Mediterranean Dialogue initiative in 1994, the Euro-Atlantic Partnership Council in 1997, and the NATO–Russia Permanent Joint Council in 1998. At the 1999 Washington summit,
Hungary Hungary ( hu, Magyarország ) is a landlocked country in Central Europe. Spanning of the Carpathian Basin, it is bordered by Slovakia to the north, Ukraine to the northeast, Romania to the east and southeast, Serbia to the south, C ...
,
Poland Poland, officially the Republic of Poland, is a country in Central Europe. It is divided into 16 administrative provinces called voivodeships, covering an area of . Poland has a population of over 38 million and is the fifth-most populo ...
, and the
Czech Republic The Czech Republic, or simply Czechia, is a landlocked country in Central Europe. Historically known as Bohemia, it is bordered by Austria Austria, , bar, Östareich officially the Republic of Austria, is a country in the ...
officially joined NATO, and the organization also issued new guidelines for membership with individualized " Membership Action Plans". These plans governed the addition of new alliance members:
Bulgaria Bulgaria (; bg, България, Bǎlgariya), officially the Republic of Bulgaria,, ) is a country in Southeast Europe. It is situated on the eastern flank of the Balkans, and is bordered by Romania to the north, Serbia and North Ma ...
,
Estonia Estonia, formally the Republic of Estonia, is a country by the Baltic Sea The Baltic Sea is an arm of the Atlantic Ocean The Atlantic Ocean is the second-largest of the world's five oceans, with an area of about . It covers appro ...
,
Latvia Latvia ( or ; lv, Latvija ; ltg, Latveja; liv, Leţmō), officially the Republic of Latvia ( lv, Latvijas Republika, links=no, ltg, Latvejas Republika, links=no, liv, Leţmō Vabāmō, links=no), is a country in the Baltic region of ...
,
Lithuania Lithuania (; lt, Lietuva ), officially the Republic of Lithuania ( lt, Lietuvos Respublika, links=no ), is a country in the Baltic region of Europe. It is one of three Baltic states and lies on the eastern shore of the Baltic Sea. Lithuania ...
, Romania, Slovakia, and
Slovenia Slovenia ( ; sl, Slovenija ), officially the Republic of Slovenia (Slovene: , abbr.: ''RS''), is a country in Central Europe Central Europe is an area of Europe Europe is a large peninsula conventionally considered a continent i ...
in 2004, Albania and
Croatia , image_flag = Flag of Croatia.svg , image_coat = Coat of arms of Croatia.svg , anthem = " Lijepa naša domovino"("Our Beautiful Homeland") , image_map = , map_caption = , capi ...
in 2009,
Montenegro ) , image_map = Europe-Montenegro.svg , map_caption = , image_map2 = , capital = Podgorica , coordinates = , largest_city = capital , official_languages = Mo ...
in 2017, and
North Macedonia North Macedonia, ; sq, Maqedonia e Veriut, (Macedonia before February 2019), officially the Republic of North Macedonia,, is a country in Southeast Europe. It gained independence in 1991 as one of the successor states of Socialist Feder ...
in 2020. The election of French President Nicolas Sarkozy in 2007 led to a major reform of France's military position, culminating with the return to full membership on 4 April 2009, which also included France rejoining the NATO Military Command Structure, while maintaining an independent nuclear deterrent.