, officially the ( tgl|Bayan ng ), is a in the province of , . According to the , it has a population of people. A popular attraction is Spanish-era St. Jerome's Parish Church. The town is also known for featuring the ''balaw-balaw'' side dish, as well as for having education as its priority- "''Una Ang Edukasyon''" (Education first), that is why during the early-1970s and early-1990s, it became the center of education. Students from different places mostly in the nearby towns of Rizal would come and study in Morong.

Morong was considered the province before it was called Rizal. Its original name was Politico Militar Distrito de Morong, which included the towns that make up present-day Rizal province.

On January 16, 1572, Captain Juan Maldonado, a trusted officer under Martin de Goiti, a Deputy of Miguel Lopez de Legaspi, came to a thriving community by a river while leading a Spanish contingent exploring the areas East of Manila. They named the community, Moron, after a township in Spain. This happened almost a year after Martin De Goit occupied Manila after routing the forces of Rajah Soliman (Sulayman). The Spaniards found an organized community along both banks of the river but outlying settlements / barangays were in conflict with each other. The barangays were subjugated and the natives Christianized starting 1578 by Franciscan missionaries Juan de Placencia and Diego de Oropesa. They constructed chapels (visitas) attached to a bigger settlement to allow religious and civil administration. Later, this settlement was converted into a pueblo. which they called Pueblo de Moron. Baras, Tanay, Pililla, Binangonan were the visitas under Pueblo de Morong. Pueblo de Morong was made the provincial capital of the Franciscan Order at that time. The visita of Pilang separated from Morong and became the independent town of Pililla. Binangonan followed in 1621.

The Politico-Militar Distrito de Morong or Distrito de Morong was created out of the provinces of Manila and Laguna composing the pueblos of Morong, Pililla, Tanay, Baras, Binangonan, Jalajala, Angono, Antipolo, Boso-Boso, Cainta and Taytay. During the Spanish colonization in the Philippines, each town (pueblo) was admistered by a gobernadorcillo, elected annually by all natives of the locality, subject to the approval of the suerior government in located in Manila. In the 19th century, gobernadorcillos were elected by 12 cabezas de barangay. In the pueblo of Morong, it was different. A gobernadorcillo was not elected but was appointed by the governor of the province based on his economic wealth, training and educational background. He chose his own people and were not elected to help him with his duties. They did not receive salary but were exempted from paying taxes and doing forced labor.

The original Bridge of Morong was made of adobe stones, shaped and placed together, forming an arch over the river. The strength and stability of the bridge came from the weight of its wedge-shaped stone blocks and its upright position. The stones were cemented with mortar, a mixture of fine sand, lime, molasses and juice of ground puso-puso leaves. Heavy piers of the arch were planted on the opposite banks of the river. No metals were used during its construction from 1696 to 1701.

This church was constructed not only by men, but also women and children. Stones dug from a hill called Kay Ngaya; lime from the stones of the mountain Kay Maputi; sand and gravel from Morong River; and timber were contributed by the townspeople. 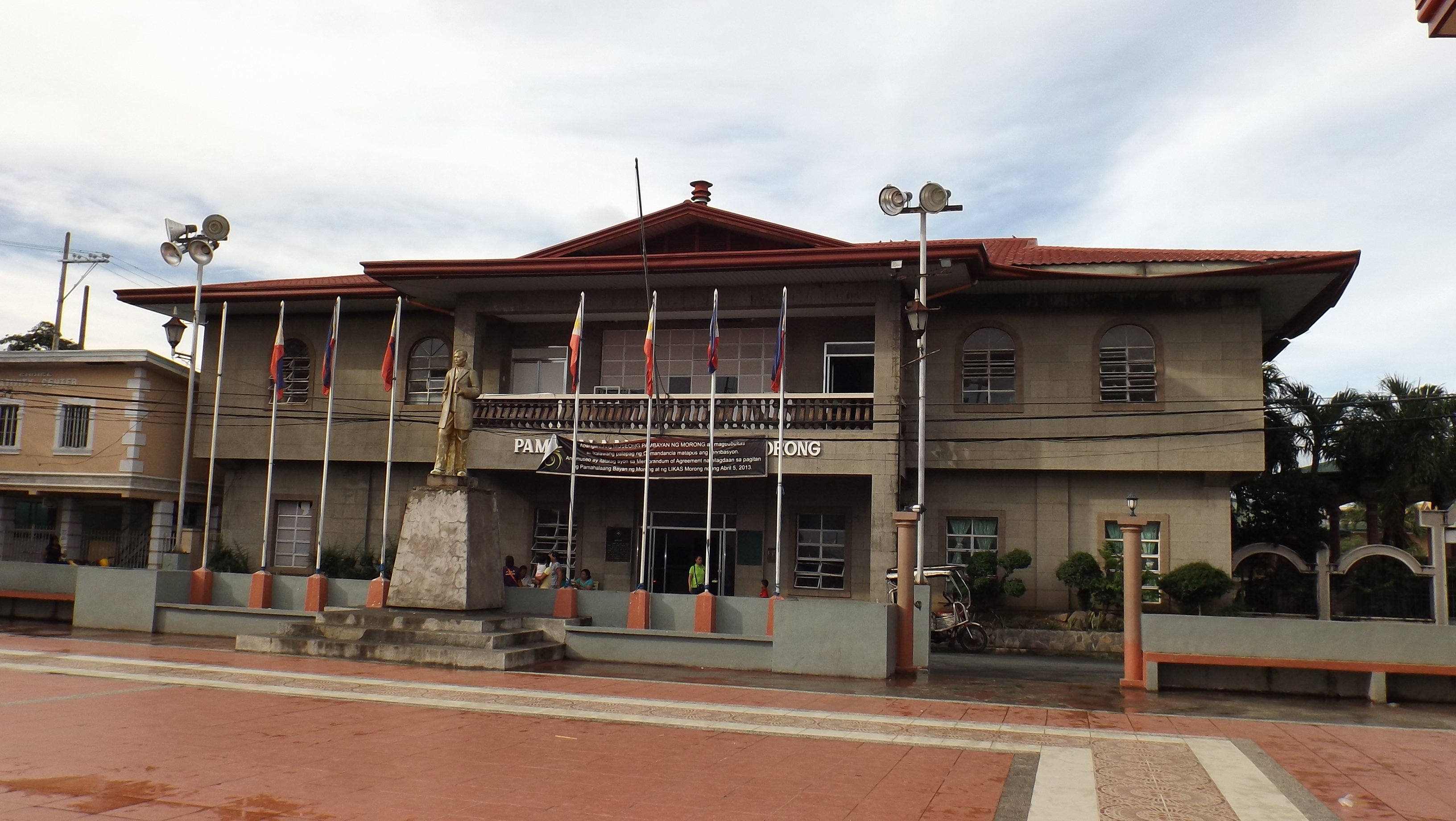 During the period of Spanish colonization, this building housed the Comandacia del Distrito Politico-Militar de Morong, the seat of Government for the Distrito. It was originally made of adobe stones, hard wood and galvanized iron sheets for roofing. During the early American period, it was converted into a school. It was damaged after the second world war, but rebuilt with alterations and continued to be used as a primary school building. It was later torn down and rebuilt using reinforced concrete materials and used as the municipal office building for the government of Morong. In 2011, the local government offices were transferred to the new municipal building in a different location. The Comandancia's second floor has since been converted into a public museum.

Bantayan was a small guardhouse where civil guards were stationed at the entrance of the town. On the other hand, a torrita was a small tower with bells that provided the signal directed to the central station in front of the Commandancia.

The first Filipino to die in World War I was Private Tomas Mateo Claudio, who served with the U.S. Marine Corps as part of the American Expeditionary Forces to Europe. He died in the Battle of Château Thierry in France on June 29, 1918. The Tomas Claudio Memorial College in Morong, which was founded in 1950, was named in his honor. The main street of the town was also named in his honor.

The Puente de San Geronimo (old Morong Bridge) was intentionally blasted by the guerrillas so that Japanese troops could not cross and occupy the Northern part of Morong and Rizal until reinforcements could come. The plan worked for a few days but Japanese troops were eventually able to cross the river at a shallower part farther downriver. The Japanese occupation of the town was broken up by then-Lieutenant Edwin Ramsey, leading the last cavalry charge in U.S. military history with horses from the 26th Cavalry Regiment which he and a platoon of Philippine Scouts had ridden there from Fort Stotsenburg. During the Liberation, Filipino troops of the 4th and 42nd Infantry Division of the Philippine Army and 4th Constabulary Regiment of the Philippine Constabulary including the recognized guerrillas of the Col. Markings Guerrillas and the Hunters ROTC guerrillas liberated and captured the towns in Morong, defeated Japanese forces and forced them to surrender by the end of the War. 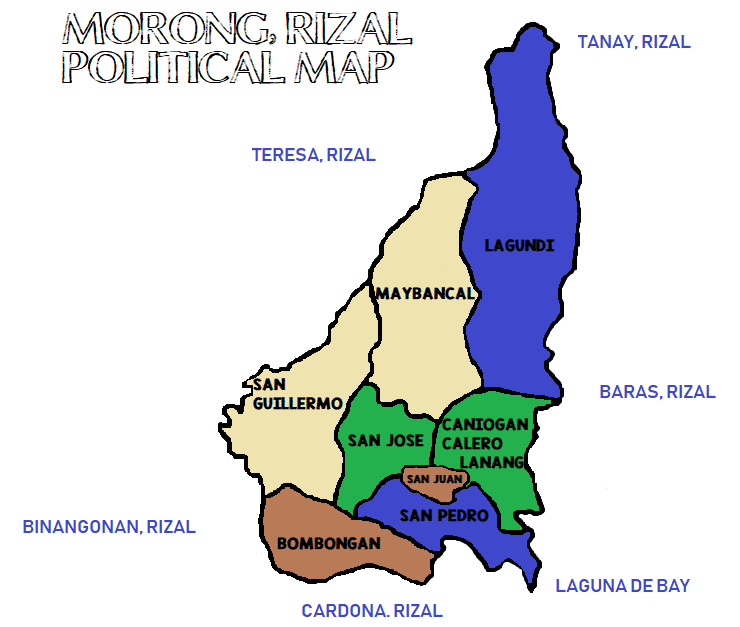 In terms of area, San Guillermo or San Guilmo as locals known is the biggest of the eight barangays of Morong. It borders the towns of Binangonan, Teresa and Tanay. San Guillermo is a farming community with a population of 6,522 and 1,377 total dwellings (2000 census). While majority in the barrio depend on farming as a livelihood, many others are engaged in businesses like garment industry, poultry and piggery. San Isidro Labrador is the patron Saint of San Guillermo, a feast in his honor is celebrated annually the 15th of May. In 2005, the small chapel of San Isidro Labrador became a full pledge Parish in th
Diocese of Antipolo
serving 10,500 Catholics. Also in 2005, San Guillermo National High School was established. The first wave of San Guillermo immigrants to America came in the early-1900s. San Guillermo natives living in California maintain their cultural heritage by hosting a gathering on Memorial Day in celebration of feast of patron saint San Isidro Labrador. Most San Guillermo natives live in the metropolitan areas of Los Angeles and San Francisco, and the feast is alternately celebrated in both cities since its conception in 1979.

A Barangay in Morong Rizal, Located in the east of the town. The main industries are Farming, Textile Manufacturing, and Food Industry. There are about 8,709 people who live in this area and the ratio of men to women is 1:2.

Barangay Lagundi is the easternmost barangay of Morong, Rizal. The main road is Raymundo Street which connects to the northernmost barangay and boundary of Baras, Rizal and the capital of Rizal Province, Antipolo. The road access towards the aforementioned barangays are concrete and access is easy unlike before. There are two public elementary schools in the barangay, namely: Lagundi Elementary School and Pulong Kumunoy Elementary School. To cater the needs of accessibility of students, Morong National High School annexed a campus beside the Lagundi Elementary School. Commercial establishments are abundant, most especially to the entry point. Alfamart and certain stores and restaurant chains are located within the vicinity. During All Saint's Day, the area is known to be a marketplace for flowers from Baguio and neighboring municipalities in Cordillera. The barangay's patron saint is the Immaculate Heart of Mary and Sunday masses are celebrated in the chapel every 5:00PM presided by a Roman Catholic Priest from the mother parish, St. Jerome Church. During the feast day in June, a procession is often held.

In the , the population of Morong, Rizal, was people, with a density of .

* Uugong Park - During the early 60's-early 80's Uugong park was known for its breath taking view of the rice fields, different birds can be seen and its majestic waterfalls. It is usually a summer spot for families. Uugong means echo, because of the strong current of the falls it makes a loud echo or sound. People from the town usually wash their clothes there, even water carabao's also takes a dip during the hot summer months. :Uugong Park now has a resort made and owned by a local artist named Rafael Pacheco, who is known not only locally but internationally because of his paintings. His medium for his paintings are his fingers. The resort does not use the old falls anymore, instead two pools were made, inside the resort you can view the now dead waterfalls and its river. Interesting in the new Uugong resort are the displayed collection of paintings and sculpture of Mr. Pacheco. * Puking Bato - also called Duckling Society Park, located at Natividad street at Boulevard (ibaba dulo). Many people in Morong likes to go here early morning, to do some jogging, chatting * Cavalier Statue - Located at Barangay Maybancal in Morong, Rizal. The Cavalier Statue is the symbol of the barangay. Every year the Maybancaleños celebrate the Cavalier's Day on 25 October. * Morong's old Municipal office - Located in Brgy San Pedro, near the Town Plaza. This building was the former seat of office of the governor of Rizal during the Distrito Politica de Morong, also known as the "Commandancia". * St. Jerome Parish Church - The most notable landmark in Morong Rizal. Built in by Chinese craftsman during the arrival of the first Spanish priest. It is known for its unique and intricate neo-baroque style design and its three-storey belfry as its facade.

Kayas Kawayan: art made of Bamboo Morong is also known for its "Kayas Kawayan". The town is the first and is known to make Baluwartes, an art made of bamboo, with intricate designs. Usually used during special events such as weddings, cordero, and fiestas, its usually found in the entrance gate of the event. During cordero, the lamb- which is made of cake, sweet potatoes and potatoes, is placed and processioned around the town until the church in a small kayas kawayan, carried by men, adorned with flowers. Now this art is being copied by the nearby towns.

Some of the famous games in Morong, Rizal are the following. This dates from the 1940s to 1997. *Putitiro - It is also called ''patintero''. A Filipino street game. Wherein the "it" person stands in a line, and the other person should cross that line without getting touched by the "It". *Hulugang Ginto - popular night game especially during full moon. *Pasenorden - follow the leader game. The leader would shout "''Pasenorden!''" the players will say "''combento''" then the leader will say his command: "''unahan sa pag bigay sa akin ng dahon''" (bring me a leaf) the players will ask: "''anong dahon''?" (what kind of leaf). Once the leader states his command all player will look for that kind of leaf. The first one to bring the given leaf would be the next leader. *Pati cobra (Pati-Kubra) - Morong (San Guillermo) version of baseball and cricket, uses bamboo stick as paddle or bat. *Espadahan *Jopolopen - It is a game which uses balls, specifically marbles. *Stekenapan -"Stick 'em up an" a western cowboy gun game. *Taguan - Is also known as hide and seek. It is a popular game which usually played during full moon. *Dirabes - popular games by school kids in 60s and 70s particularly in San Guillermo. *Sikaran - originated in Lagundi and Baras.