The Maxim gun is a recoil-operated machine gun invented by Sir Hiram Stevens Maxim in 1884; the weapon became the first automatic firearm in production by Vickers, which used .303 British bullets, recoil-operating firing system and required Water cooling. The Maxim gun has been called "the weapon most associated with imperial conquest" by historian Martin Gilbert, and was heavily used by colonial powers during the "Scramble for Africa". Afterwards, maxim guns also saw extensive usage by different army during Russo-Japanese War, the First and Second World Wars, and are used by insurgent groups in contemporary conflicts. The Maxim gun was greatly influential in the development of machine guns, and it has multiple variants and derivatives. 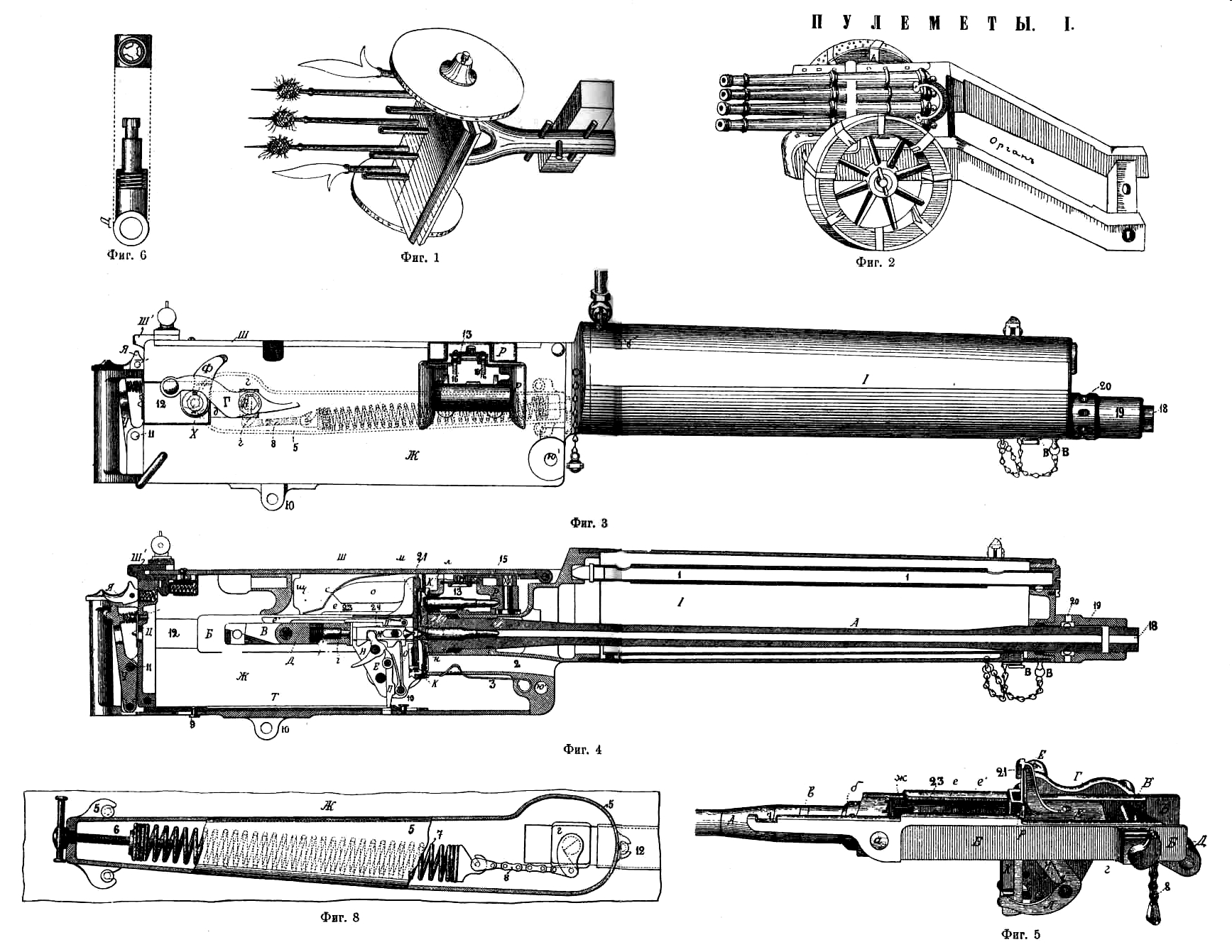 The mechanism of the Maxim gun employed one of the earliest recoil-operated firing systems in history. The idea is that the energy from recoil acting on the breech block is used to eject each spent cartridge and insert the next one, instead of a hand-operated mechanism. Maxim's earliest designs used a 360-degree rotating cam to reverse the movement of the block, but this was later simplified to a toggle lock. This made it vastly more efficient and less labor-intensive than previous rapid-firing guns, such as the Mitrailleuse, Gatling, Gardner, or Nordenfelt, that relied on actual mechanical cranking. The Maxim gun design was provided with water cooling, giving it the ability to maintain its rate of fire for far longer than air-cooled guns. The disadvantage of this was that it made the gun less flexible in attack than the lighter air-cooled weapons, being heavier and more complex, and requiring a supply of water. Trials demonstrated that the Maxim could fire 600 rounds per minute. Compared to modern machine guns, the Maxim was heavy, bulky, and awkward. A lone soldier could fire the weapon, but it was usually operated by a team of men, usually 4 to 6. Apart from the gunner, other crew were needed to speed reload, spot targets, and carry and ready ammunition and water. Several men were needed to move or mount the heavy weapon.

Maxim established the Maxim Gun Company with financing from , son of steel entrepreneur Edward Vickers. A blue plaque on the Factory where Maxim invented and produced the gun is to be found in Hatton Garden at the junction with Clerkenwell Road in London. Albert Vickers became the company's chairman, and it later joined hands with a Swedish competitor, Nordenfelt, to become Maxim Nordenfelt Guns and Ammunition Company. ''The Post Office Directory of trades in London'' of 1895 lists its office at 32 Victoria Street SW (London) on page 1579. Finally, the company was absorbed into the mother Vickers company, leading first to the Maxim-Vickers gun and then, after Vickers' redesign, the Vickers machine gun.

Maxim's first patents related to the development of the Maxim were registered in June and July 1883. The first prototype was demonstrated to invited guests in October 1884.

A prototype of the Maxim gun was given by Hiram Maxim to the Emin Pasha Relief Expedition in 1886–1890, under the leadership of Henry Morton Stanley. More a publicity stunt than a serious military contribution, in view of the main financier of the expedition, William Mackinnon, "merely exhibiting" the gun was likely to "prove a great peace-preserver". The weapon was used on several occasions, especially during the expedition's retreat from central Africa, not because of its devastating effects, but as an effective means to scare off attackers. The same prototype was brought back to central Africa by Frederick Lugard, where it played an instrumental role in the establishment of the Uganda Protectorate. The first unit in the world to receive the Maxim was the expeditionary force led by Hermann Wissmann which was sent in 1888 by the German Imperial government to its colonies in East Africa to suppress the Abushiri Revolt. Wissmann was issued one of the first Maxim guns which had reached Germany and used it successfully in his capture of Pangani. The Singapore Volunteer Corps received a Maxim gun in 1889, but it was never used. This was a civilian volunteer defence unit on the British colony. The Maxim gun was first used extensively in an African conflict during the First Matabele War in Rhodesia. During the Battle of the Shangani, 700 soldiers fought off 5,000 Matabele warriors with just five Maxim guns. It played an important role in the "Scramble for Africa" in the late 19th century. The extreme lethality was employed to devastating effect against obsolete charging tactics, when African opponents could be lured into pitched battles in open terrain. As it was put by Hilaire Belloc, in the words of the figure "Blood" in his poem "The Modern Traveller": However, the destructive power of the Maxim gun in colonial warfare has often been embellished by popular myth. Modern historical accounts suggest that, while it was effective in pitched battles, as in the Matabele wars or the Battle of Omdurman, its significance owed much to its psychological impact. A larger-calibre version of the Maxim, firing a one-pound shell, was built by Maxim-Nordenfeldt. This was known in the Second Boer War (in South Africa) as the Pom-Pom from its sound. The Boers' "one-pounder" Maxim-Nordenfeldt was a large caliber, belt-fed, water-cooled "auto cannon" that fired explosive rounds (smokeless ammunition) at 450 rounds per minute. The Maxim gun was also used in the Anglo-Aro War (in present-day Nigeria) of 1901–1902.

National and military authorities were reluctant to adopt the weapon, and Maxim's company initially had some trouble convincing European governments of the weapon's efficiency. Soldiers generally held a great mistrust of machine guns due to their tendency to jam. In the 1906 version of his book ''Small Wars'', Charles Callwell says of machine guns: "The older forms are not suitable as a rule... they jammed at Ulundi, they jammed at Dogali, they jammed at Abu Klea and Tofrek, in some cases with unfortunate results." However, the Maxim was far more reliable than its contemporaries. A more immediate problem was that, initially, its position was easily given away by the clouds of smoke that the gun produced (although the same was true of artillery pieces and units of troops that the machine gun was intended to replace or supplement, so this wasn't viewed as a particular drawback by the early users). The advent of smokeless powder (developed by, among others, Hiram's brother Hudson Maxim), helped to change this. The weapon was adopted by the British Army under the guidance of Sir Garnet Wolseley, who had been appointed Commander-in-Chief of the British Army in 1888. In October that year, he placed an order of 120 rifle-calibre Maxims using the same .577/450 ammunition as the Martini–Henry rifles. Wolseley had previously led military expeditions in Africa (the Ashanti war and the Gordon Relief Expedition in 1884–85) and had a reputation for being a strong subscriber to military innovation and reform, which he demonstrated in Africa. There he used machine guns, explored other unconventional ideas, and founded an Egyptian camel corps. The gun's design was also purchased and used by several other European countries.

In 1895, the Imperial Japanese Army purchased a number of Maxims but later decided to standardize on the Hotchkiss machine gun. The Imperial Russian Army likewise purchased 58 Maxim machine guns in 1899 and contracted with Vickers in 1902 to manufacture the design in Russia, although manufacturing did not start until 1910. During the Russo-Japanese War of 1904–1906, the Russian Army employed the Maxim in combat and placed a rush order for another 450 units from overseas suppliers, which were mostly delivered to front-line troops before the end of the war. 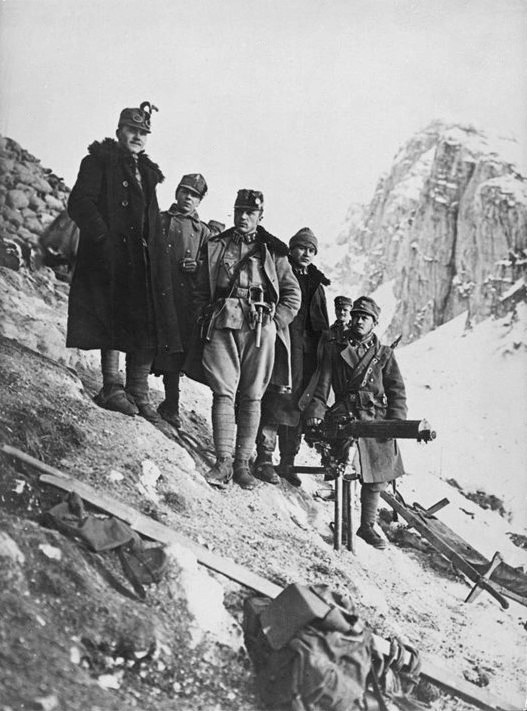 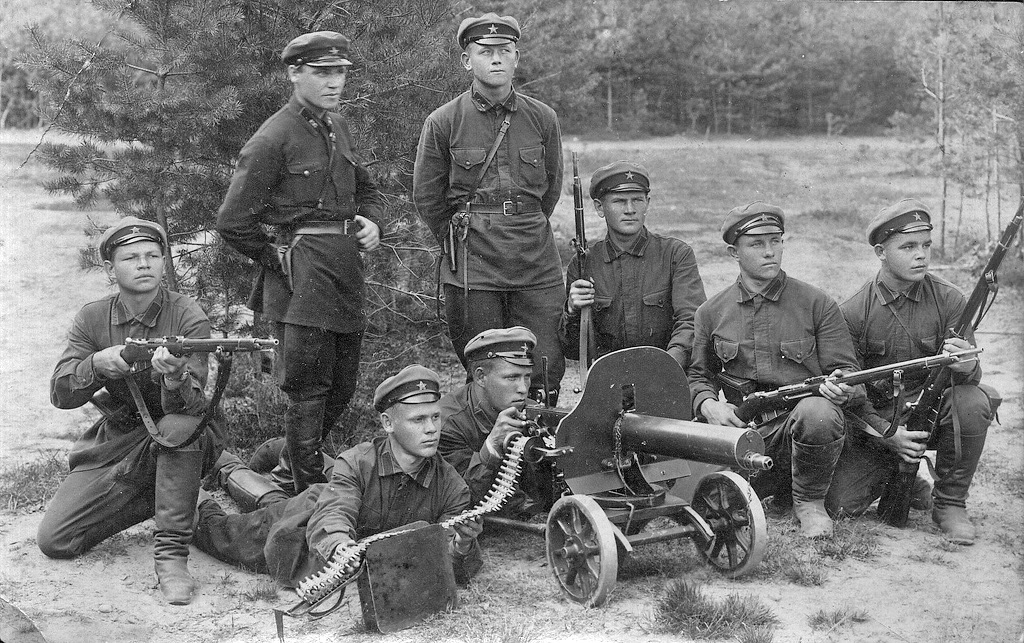 By World War I, many armies had moved on to improved machine guns. The British Vickers machine gun was an improved and redesigned Maxim, introduced into the British Army in 1912 and remaining in service until 1968. Production took place at Erith in Kent, and some models were fitted to early biplanes also fabricated there. The German Army's Maschinengewehr 08 and the Russian Pulemyot Maxim were both more or less direct copies of the Maxim. It also saw use during the Russian Civil War, which followed the Revolution in 1917. A picture of the period depicts a Maxim gun mounted on a tachanka, a horse-drawn carriage, along with the gunner, firing backwards at a pursuing White Army regiment. Anarchists attribute this mobile setup to Nestor Makhno.

The United States Army had shown interest in the Maxim machine gun since 1887. Model 1889 and Model 1900 Maxims were used for testing, which lasted for years but not continuously. The gun was finally adopted in 1904 as the Maxim Machine Gun, Caliber .30, Model of 1904 as the first rifle-caliber heavy machine gun for standard service in the U.S. Army. The first 50 guns and tripods were made by Vickers, Sons & Maxim in the U.K. chambered for .30-03. Colt's Manufacturing Company was selected to produce it domestically, but challenges with schematics and specifications delayed its introduction. By the time Colt began production in 1908 (which was also the last year orders were placed for the guns), a total of 90 M1904s were made by Vickers. Colt made their machine guns for the new .30-06 caliber, and the ones made by Vickers were re-chambered for the new round. A total of 287 M1904 Maxims were manufactured. The U.S. procured other machine guns after M1904 production ended, including the M1909 Benét–Mercié, the Colt–Vickers M1915, and the Browning M1917. M1904 Maxims were issued to infantry companies and cavalry. Each company had four guns with associated tripods, ammunition, and 20 mules to transport the heavy guns. The M1904 was deployed in operations in the Philippines, Hawaii, Mexico, and Central and South America, but never saw much combat use. During World War I, it remained in the U.S. for training.

Soviet Russia officially used Maxim machine guns in fortresses along the Chinese border until the 1980s because their water-cooled system was deemed to be a more reliable solution for very heavy and extended use against prolonged human-wave-type attacks.

* Maxim 5-barrel machine gun, 5-barrel variant fed from overhead inserted magazines and later belt-fed. * Vickers machine gun: earlier Maxims had been chambered for earlier British service cartridges, but the Vickers was produced for export available in most of the different calibres and cartridges used by countries around the world, and including a large caliber (.50 inch) as used on Royal Navy warships. The machine gun was lighter and had been tested by the Army in 1909. * Maschinengewehr 01, made by Deutsche Waffen und Munitionsfabriken (DWM) * MG 08 ** Derivatives (e.g., MG08/15) * Chinese Type 24 Heavy Machine Gun (Copies of the Maschinengewehr 1908) * Maschinengewehr Modell 1911, made by Waffenfabrik Bern * Russian/Soviet Pulemyot Maxima PM1910 and lighter variants Maxim–Tokarev and PV-1 machine gun * Finnish Maxim M09/21 and Maxim M/32-33 * American M1904 * Romanian-made 6.5 mm version, at least 8–12 were produced and were used by the Romanian Danube Flotilla during World War I * MG 18 TuF Anti-tank & Anti-aircraft gun *

* Anon, ''Vickers, Sons and Maxim Limited: Their Works and Manufactures. (Reprinted from 'Engineering')'' London (1898). It gives plates showing the mechanism of the Vickers Maxim gun and numerous plates showing the variety of mounts available at the end of the 19th century. It also includes numerous plates of the factories in which they were made. * This is a reprint of the 1906 version. * (See chapter 3: "Hiram Maxim Changes War") * * * *


Handbook of the Maxim Automatic Machine Gun, caliber .30, model of 1904, with pack outfits and accessories. US War Department, July 1916