Maltese ( mt|Malti|links=no) is a Semitic language spoken by the Maltese people. It is the national language of Malta and the only Semitic official language of the European Union. Maltese is a Latinised variety of spoken historical Arabic through its descent from Siculo-Arabic, which developed as a Maghrebi Arabic dialect during the Emirate of Sicily between 831 and 1091. As a result of the Norman invasion of Malta and the subsequent re-Christianisation of the island, Maltese evolved independently of Classical Arabic in a gradual process of Latinisation. It is therefore exceptional as a variety of historical Arabic that has no diglossic relationship with Classical or Modern Standard Arabic. Maltese is thus classified separately from the 30 varieties constituting the modern Arabic macrolanguage. Maltese is also distinguished from Arabic and other Semitic languages since its morphology has been deeply influenced by Romance languages, namely Italian and Sicilian. The original Arabic base comprises around one-third of the Maltese vocabulary, especially words that denote basic ideas and the function words, but about half of the vocabulary is derived from standard Italian and Sicilian; and English words make up between 6% and 20% of the vocabulary. A 2016 study shows that, in terms of basic everyday language, speakers of Maltese are able to understand around a third of what is said to them in Tunisian Arabic, which is a Maghrebi Arabic related to Siculo-Arabic, whereas speakers of Tunisian Arabic are able to understand about 40% of what is said to them in Maltese. This reported level of asymmetric intelligibility is considerably lower than the mutual intelligibility found between other varieties of Arabic. Maltese has always been written in the Latin script, the earliest surviving example dating from the late Middle Ages. It continues to be the only standardised Semitic language written exclusively in the Latin script. 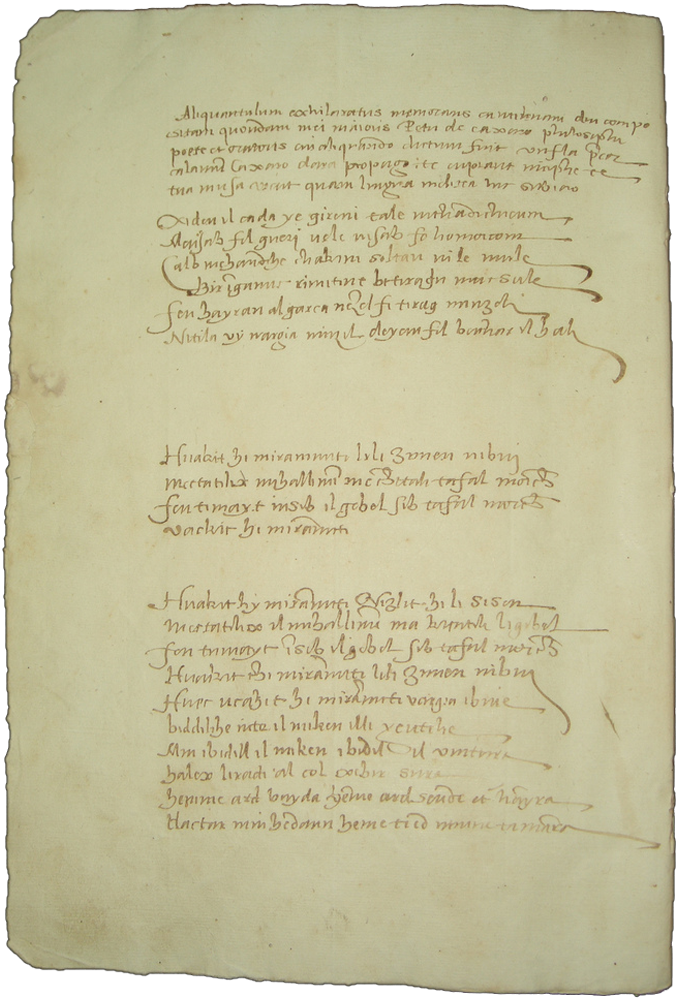 The origins of the Maltese language are attributed to the arrival, early in the eleventh century, of settlers from neighbouring Sicily, where Siculo-Arabic was spoken, following the Fatimid Caliphate's conquest of the island at the end of the ninth century. This claim has been corroborated by genetic studies, which show that contemporary Maltese people share common ancestry with Sicilians and Calabrians, with little genetic input from North Africa and the Levant. The Norman conquest in 1091, followed by the expulsion of the Muslims—complete by 1249—permanently isolated the vernacular from its Arabic source, creating the conditions for its evolution into a distinct language. In contrast to Sicily—where Siculo-Arabic became extinct and replaced by Sicilian—the vernacular in Malta continued to develop alongside Italian, eventually replacing it as official language in 1934 – alongside English. The first written reference to the Maltese language is in a will of 1436, where it is called ''lingua maltensi''. The oldest known document in Maltese, ''Il-Kantilena'' () by Pietru Caxaro, dates from the 15th century. The earliest known Maltese dictionary was a 16th-century manuscript entitled "Maltese-Italiano"; it was included in the ''Biblioteca Maltese'' of Mifsud in 1764, but is now lost.

''SIL Ethnologue'' (2015) reports a total of 522,000 Maltese speakers, with 371,000 residing in Malta (close to 90% of Maltese population) according to the European Commission (2012). This implies a number of around 150,000 speakers in the Maltese diaspora. Most speakers are bilingual, the majority of speakers (345,000) regularly use English, and a reported 66,800 regularly use French. The largest diaspora community of Maltese speakers is in Australia, with 36,000 speakers reported in 2006 (down from 45,000 in 1996, and expected to decline further). The Maltese linguistic community in Tunisia originates in the 18th century. Numbering at several thousand in the 19th century, it was reported at only 100 to 200 people as of 2017.

Maltese is descended from Siculo-Arabic, a Semitic language within the Afroasiatic family, that in the course of its history has been influenced by Sicilian and Italian, to a lesser extent French, and more recently English. Today, the core vocabulary (including both the most commonly used vocabulary and function words) is Semitic, with large numbers of loanwords. Because of the Sicilian influence on Siculo-Arabic, Maltese has many language contact features and is most commonly described as a language with a large number of loanwords. The Maltese language has historically been classified in various ways, with some claiming that the ancient Punic language (another Semitic language) was its origin instead of Siculo-Arabic, while others believed the language to be one of the Berber languages (another family within Afroasiatic), and under the Fascist Kingdom of Italy, it was classified as regional Italian.