The MP 40 (''Maschinenpistole 40'') is a submachine gun chambered for the 9×19mm Parabellum cartridge. It was developed in Nazi Germany and used extensively by the Axis powers during World War II. Designed in 1938 by Heinrich Vollmer with inspiration from its predecessor the MP 38, it was heavily used by infantrymen (particularly platoon and squad leaders), and by paratroopers, on the Eastern and Western Fronts as well as armoured fighting vehicle crews. Its advanced and modern features made it a favorite among soldiers and popular in countries from various parts of the world after the war. It was often called "Schmeisser" by the Allies, after Hugo Schmeisser, who designed the MP 18, although he was not involved in the design or production of the MP40. The weapon's other variants included the MP 40/I and the MP 41. From 1940 to 1945, an estimated 1.1 million were produced by Erma Werke. 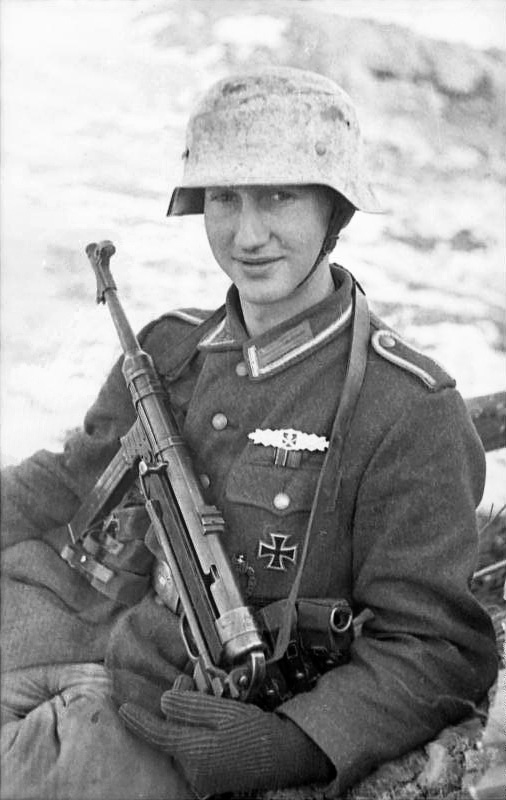 The ''Maschinenpistole 40'' ("Machine pistol 40") descended from its predecessor the MP 38, which was in turn based on the MP 36, a prototype made of machined steel. The MP 36 was developed independently by Erma Werke's Berthold Geipel with funding from the German Army. It took design elements from Heinrich Vollmer's VPM 1930 and EMP. Vollmer then worked on Berthold Geipel's MP 36 and in 1938 submitted a prototype to answer a request from the ''Heereswaffenamt'' (Army Weapons Office) for a new submachine gun, which was adopted as MP 38. The MP 38 was a simplification of the MP 36, and the MP 40 was a further simplification of the MP 38, with certain cost-saving alterations, most notably in the more extensive use of stamped steel rather than machined parts. The MP 40 was often called the "Schmeisser" by the Allies, after the weapon designer Hugo Schmeisser. Schmeisser had designed the MP 18, which was the first mass-produced submachine gun. He did not, however, have anything to do with the design or development of the MP 40, although he held a patent on the magazine.

The MP 40 submachine guns are open-bolt, blowback-operated automatic arms. The only mode of fire was fully automatic, but the relatively low rate of fire enabled single shots with controlled trigger pulls. The bolt features a telescoping return spring guide which serves as a pneumatic recoil buffer. The cocking handle was permanently attached to the bolt on early MP 38s, but on late production MP 38s and MP 40s, the bolt handle was made as a separate part. It also served as a safety by pushing the head of the handle into one of two separate notches above the main opening; this action locked the bolt either in the cocked (rear) or uncocked (forward) position. The absence of this feature on early MP 38s resulted in field expedients such as leather harnesses with a small loop that were used to hold the bolt in the forward position. The MP 38 receiver was made of machined steel, but this was a time-consuming and expensive process. To save time and materials, and thus increase production, construction of the MP 40 receiver was simplified by using stamped steel and electro-spot welding as much as possible. The MP 38 also features longitudinal grooving on the receiver and bolt, as well as a circular opening on the magazine housing. These features were eliminated on the MP 40. 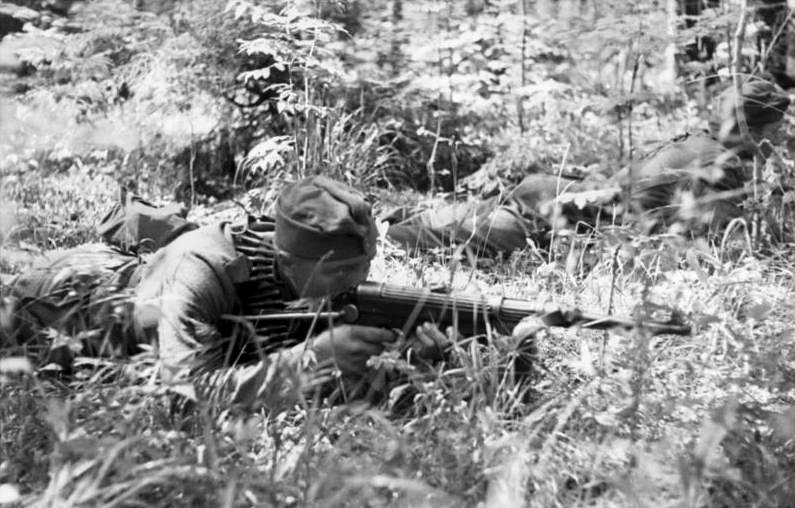 One unique feature found on most MP 38 and MP 40 submachine guns was an aluminum, steel, or bakelite resting bar or support under the barrel. This was used to steady the weapon when firing over the side of open-top armored personnel carriers such as the Sd.Kfz. 251 half-track. A handguard, made of a synthetic material derived from bakelite, was located between the magazine housing and the pistol grip. The barrel lacked any form of insulation, which often resulted in burns on the supporting hand if it was incorrectly positioned. The MP 40 also had a forward-folding metal stock, the first for a submachine gun, resulting in a shorter overall weapon when folded. However, this stock design was at times insufficiently durable for hard combat use. Although the MP 40 was generally reliable, a major weakness was its 32-round magazine. Unlike the double-column, staggered-feed magazine insert found on the Thompson M1921/1928 variants, the MP 40 used a double-column, single-feed insert. The single-feed insert resulted in increased friction against the remaining cartridges moving upwards towards the feed lips, occasionally resulting in feed failures; this problem was exacerbated by the presence of dirt or other debris. Another problem was that the magazine was also sometimes misused as a handhold. This could cause the weapon to malfunction when hand pressure on the magazine body caused the magazine lips to move out of the line of feed, since the magazine well did not keep the magazine firmly locked. German soldiers were trained to grasp either the handhold on the underside of the weapon or the magazine housing with the supporting hand to avoid feed malfunctions.

At the outbreak of World War II, the majority of German soldiers carried either Karabiner 98k rifles or MP 40s, both of which were regarded as the standard weapons of choice for an infantryman. However, later confrontations with Soviet troops such as the Battle of Stalingrad, where entire enemy units were armed with PPSh-41 submachine guns, the Germans found themselves out-gunned in short range urban combat which caused a shift in their tactics, and by the end of the war the MP 40 and its derivatives were sometimes issued to entire assault platoons. Starting in 1943, the German military moved to replace both the Karabiner 98k rifle and MP 40 with the new, revolutionary StG 44. By the end of World War II in 1945, an estimated 1.1 million MP 40s had been produced of all variants.

During and after the end of World War II, many MP 40s were captured or surrendered (upwards of 200,000) to the Allies and were then redistributed to the paramilitary and irregular forces of some developing countries. The Norwegian army withdrew the MP 38 from use in 1975 but used the MP 40 for some years more. In particular, the Territorials (Heimevernet) used it until about 1990, when it was replaced by the Heckler & Koch MP5.

The MP 40/I (sometimes erroneously called ''MP 40/II'') was a modified version of the standard MP 40 with a dual side-by-side magazine holder (for a theoretical ammunition total of 64 rounds), designed for special operations troops on the Eastern Front to compensate for the enemies' PPSh-41 larger magazine capacity. However, the design proved unsuccessful due to weight and reliability issues. Authentic versions, in addition to the dual mag magazine well, also have a smaller buttpad and shortened ejector.

In 1941, Hugo Schmeisser designed the MP 41, which was, in reality, an MP 40 upper receiver with a lower receiver of an MP 28 submachine gun. It saw limited service, however, and was issued only to SS and police units in 1944. The MP 41 was also supplied to Germany's Axis ally Romania. Later in 1941, rival company Erma Werke sued Haenel, at which Schmeisser was Chief Designer, for patent infringement. Production subsequently ceased on the MP41.

During World War II, the resistance and the Allies sometimes captured MP 40s to replace or supplement their own weapons. The MP 40 was used for several decades following World War II by many countries around the world in armed conflicts. Some found their way into guerrilla groups such as the Viet Cong or African guerrillas. Its operators have included: *: the National Liberation Army used MP 40s supplied by Czechoslovakia and Yugoslavia. * * * * * *: French resistance used captured guns during World War II. MP 40s were also carried by French Army in the French Indochina and French Algeria. * * : MP 38/40 supplied in 1954 from Czechoslovakia, still in service with the police at the end of the Guatemalan Civil War. * * * * Italian Partisans: Used examples captured from German soldiers. * Kosovo Liberation Army * used by the ''Wehrmacht'', military police, Gestapo, Waffen-SS, ''Volkssturm'', and Hitler Youth at the end of war. * *captured MP 40s, were used by Polish réels during the war. * *: captured MP 40s were used by Soviet partisans and Worker-Peasant Red Army. After the war, the MP 40 with other weapons, were sold to others countries in the Eastern Bloc.