The MG 42 (shortened from German: ''Maschinengewehr 42'', or "machine gun 42") is a 7.92×57mm Mauser general-purpose machine gun designed in Nazi Germany and used extensively by the Wehrmacht and the Waffen-SS during the second half of World War II. Entering production in 1942, it was intended to supplement and replace the earlier MG 34, which was more expensive and took much longer to produce, but both weapons were produced until the end of World War II. Designed to be low-cost and easy to build, the MG 42 proved to be highly reliable and easy to operate. It is most notable for its very high cyclic rate for a gun using full power service cartridges, averaging about 1,200 rounds per minute compared to around 850 for the MG 34, and perhaps 450 to 600 for other common machine guns like the M1919 Browning or FM 24/29 or Bren. This ability made it extremely effective in providing suppressive fire, and its unique sound led to it being nicknamed "Hitler's buzzsaw". The MG 42 was adopted by several armed organizations after the war, and was both copied and built under licence. The MG 42's lineage continued past Nazi Germany's defeat, forming the basis for the nearly identical ''MG1'' (MG 42/59), chambered in 7.62×51mm NATO, which subsequently evolved into the MG1A3, and later the Bundeswehr's MG 3, Italian MG 42/59 and Austrian MG 74. It also spawned the Yugoslav unlicensed nearly identical Zastava M53. The MG 42 lent many design elements to the Swiss MG 51 and SIG MG 710-3, French AA-52, American M60 and Belgian MAG general-purpose machine guns and the Spanish 5.56×45mm NATO Ameli light machine gun.

Before World War I

Even before World War I, the German military was already looking forward to replacing the heavy machine guns which proved to be such a success in that war. The MG13 was one of the first developments toward a goal of producing a weapon that could perform multiple roles, rather than just one. The MG13 was the result of reengineering the Dreyse Water-cooled machine gun to fit the new requirement. The twin-barreled Gast gun was developed with the goal of providing a high cyclic rate of fire weapon for anti-aircraft use which was reported to have reached cyclic rates of fire as high as 1,600 rounds per minute.

This eventually led to the ''Einheitsmaschinengewehr'' (Universal machine gun) introducing an entirely new concept in automatic firepower. By changing its mount, sights and feed mechanism, the operator could radically transform an ''Einheitsmaschinengewehr'' for several purposes. The MG 34 is considered to be the first modern general-purpose machine gun or ''Einheitsmaschinengewehr''. It was developed to use the standard German 7.92×57mm Mauser full-power rifle round. It was envisaged and well developed to provide portable light and medium machine gun infantry cover, anti-aircraft coverage, and even sniping ability. Equipped with a quick-change barrel and fed either with non-disintegrating metallic-link belts, or from a 50-round ''Gurttrommel'' (belt drum) or a 75-round spring-loaded saddle-drum ''Patronentrommel 34'' magazines (with a simple change of the feed cover for a Trommelhalter magazine holder), the MG 34 could sustain fire for much longer periods of time than other portable squad-level weapons such as the American M1918 Browning Automatic Rifle (BAR), Soviet Degtyaryov machine gun (DP-27) and the British Bren Gun, which were fed by box magazines, while also being much lighter and more portable than crew-served weapons like the Browning M1919 or Vickers machine guns (which also lacked quick-change barrels). The MG 34 was also quite versatile; not only was it able to be fed from belted ammunition or a saddle drum magazine, it could also be fired from a bipod, an innovative ''Lafette 34'' tripod or various pintle mounts for armored vehicles. Switching between a bipod and a tripod required no special tools, as the mounting latch was spring-loaded. As the MG 34 ''Panzerlauf'', it was used throughout the war as secondary armament on panzers and other vehicles. One attempt at improvement was the MG 34S, an incremental improvement on the basic 34 design. The improvements consisted of a shortened and lightened barrel, a stiffer recoil spring and a more potent recoil booster to increase the rate of fire. The MG 34S could cope with a cyclic fire rate of 1,200 rounds per minute but its components became highly stressed. Later in the war, the MG 34 was used as the basis for the Luftwaffe's MG 81 flexible defensive gun that had a cyclic fire rate of 1,400-1,600 rounds per minute. However, the MG 34 did have its drawbacks, such as sensitivity to dirt and mud, and comparatively complex and expensive production.

Development of the MG 42 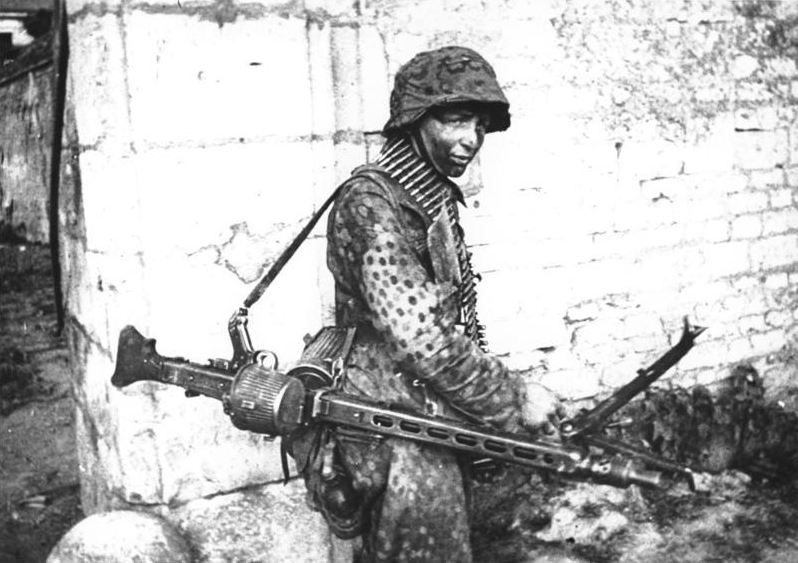 In order to address these issues, a contest was held for a true MG 34 replacement. Three companies were asked to submit designs: Metall und Lackierwarenfabrik Johannes Großfuß AG of Döbeln, Rheinmetall-Borsig of Sömmerda, and Stübgen of Erfurt. Of the number of proposals submitted, Großfuß AG's proved to be the best design by far, employing a unique recoil-operated roller locking mechanism whereas the two competing designs used a gas-actuated system. The company had no earlier experience in weapons manufacture, specializing in pressed and stamped steel components (the company's staple product was sheet metal lanterns). Dr.-Ing. Werner Gruner, one of the leading design engineers with Großfuß, knew nothing about machine guns when he was given the task of being involved with the project, although he specialized in the technology of mass production. Gruner would attend an army machine gunner's course to familiarize himself with the utility and characteristics of such a weapon, also seeking input from soldiers. He then recycled an existing Mauser-developed operating system and incorporated features from his experiences with army machine gunners and lessons learned during the early stages of the war. Being made largely out of stamped appropriately hardened carbon steel metal, the new design required considerably less machining and fewer high grade steel alloys containing metals that became scarce in Germany during World War II. It was much simpler to build than other machine guns — it took 75 man hours to complete the new gun as opposed to 150 man hours for the MG 34 (a 50% reduction), of raw materials as opposed to for the MG 34 (a 44% reduction) — and cost 250 RM as opposed to 327 RM (a 24% reduction). The resulting MG 39 remained similar to the earlier MG 34 overall, a deliberate decision made to maintain familiarity. The only major changes from the gunner's perspective were dropping of the saddle-drum-magazine feed option, leaving the weapon to fire belted ammunition, or from a single 50-round drum-shaped ''Gurttrommel'' belt container fitted to the gun's receiver, and simplifying the weapon's open sights for aiming purposes. All these changes were intended to increase, maintain, or accommodate the gun's high practical rate of fire. Although made of relatively inexpensive and simple parts, the prototypes also proved to be considerably more rugged and resistant to jamming than the precisely machined and somewhat temperamental MG 34. A limited run of about 1,500 of its immediate predecessor, the MG 39/41, was completed in 1941 and tested in combat trials.

Adoption of the MG 42

The distinctive sound caused by the high cyclic firing rate gave rise to a variety of nicknames. The Germans called it the ''Hitlersäge'' (Hitler’s Saw), ''Schnellespritze'' (Fast Sprayer), ''Knochensäge'' (Bone Saw), ''Tripperspritze'' (Gonorrhoea syringe) and ''elektrisches MG'' (electric MG). The Soviets called it the "Linoleum Ripper", and British and American troops called it "Hitler's Buzzsaw", or "Hitler's Zipper". Like the MG 34, British troops sometimes called it a "Spandau", a traditional generic term for all German machine guns, left over from the famous Allied nickname for the MG 08 Maxim-derivative used by German forces during World War I and derived from its manufacturer's plates noting the city of Spandau where some were produced. Brazilian expeditionary soldiers fighting in Italy used to refer to the MG 42 as ''Lourdinha''; this nickname is due to the fact that the bride of one of the soldiers, named Maria de Lourdes, was a seamstress and the sound of MG 42 was similar to the sound of her sewing machine (''Lourdinha'' is a common nickname in Brazil for women called Maria de Lourdes).

The German tactical infantry doctrine of the era based a (10-man ''Gruppe'') squad's firepower on the general-purpose machine gun in the light machine gun role so that the role of the rifleman was largely to carry ammunition and provide covering fire for the machine gunners. The advantage of the general purpose machine gun concept was that it added greatly to the overall volume of fire that could be put out by a squad-sized unit. It was possible for operating crews to lay down a non-stop barrage of fire, pausing only when the barrel had to be replaced. This allowed the MG 42 to tie up significantly larger numbers of enemy troops than was otherwise possible. The Americans and the British trained their troops to take cover from the fire of an MG 42, and assault the position during the small time window of barrel replacement, which took around 4 to 7 seconds. The German military kept issuing Karabiner 98k bolt-action rifles and did experiment with semi-automatic rifles throughout World War II. They fielded the Gewehr 41 series of which fewer than 150,000 were built, and the Gewehr 43/Karabiner 43 series of which 402,713 were built. They also introduced their first assault rifle in 1943 – the MP43 / MP44 / StG 44 series, producing 425,977 of these. But the Karabiner 98k was made in far greater numbers – over 14,600,000 – and due to the relatively limited production of the semi-automatic and assault rifles, the bolt-action Karabiner remained the primary service weapon until the last days of World War II, and was manufactured until the surrender in May 1945. The Allied nations' infantry doctrines of World War II based a squad's/rifle section's firepower centered on the rifleman and/or a magazine fed light machine gun (BAR, Bren, DP-27/DPM, FM 24/29), and they utilised weapons with cyclic fire rates of typically 450–600 rounds per minute. The (slower) rapid firing rate used in emergency/final defensive line situations of the MG 42 was up to 500 rounds per minute.