Rizal Park ( fil|Liwasang Rizal, es|link=no|Parque Rizal), also known as Luneta Park or simply Luneta, is a historic urban park located in Ermita, Manila, Philippines. It is considered as one of the largest urban parks in Asia, covering an area of 58 hectares (140 acres). The site on where the park is situated was originally known as Bagumbayan during the Spanish colonial period. It is adjacent to the historic Walled City of Intramuros. Situated on the eastern shore of Manila Bay, the park plays a significant role in shaping the history of the Philippines. The execution of Filipino patriot José Rizal on December 30, 1896 fanned the flames of the 1896 Philippine Revolution against the Kingdom of Spain. The park was officially named in his honor, and the monument enshrining his remains serves as the park's symbolic focal point. The declaration of Philippine independence from the United States was held here on July 4, 1946, as well as later political rallies, including those of Ferdinand Marcos and Corazon Aquino, the latter having culminated in the EDSA Revolution in 1986.

Rizal Park's history began in 1820 when the Paseo de Luneta was completed just south of the walls of Manila on a marshy patch of land next to the beach during the Spanish rule. Prior to the park, the marshy land was the location of a small town called Nuevo Barrio ("New Town" or ''Bagumbayan'' in Tagalog) that dates back to 1601. The town and its churches, being close to the walled city, were strategically used as cover by the British during their attack. The Spanish authorities anticipated the danger posed by the settlements that immediately surrounded Intramuros in terms of external attacks, yet Church officials advocated for these villages to remain. Because of the part they played during the British Invasion, they were cleared after the short rule of the British from 1762 to 1764. The church of Bagumbayan originally enshrined the Black Nazarene. Because of the order to destroy the village and its church, the image was transferred first to San Nicolas de Tolentino then to Quiapo Church. This has since been commemorated by the ''Traslación'' of the relic every January 9, which is more commonly known as the Feast of the Black Nazarene. This is why the processions of January 9 have begun there in the park beginning in 2007. After the clearing of the Bagumbayan settlement, the area later became known as Bagumbayan Field where the Cuartel la Luneta (Luneta Barracks), a Spanish Military Hospital (which was destroyed by one of the earthquakes of Manila), and a moat-surrounded outwork of the walled city of Manila, known as the ''Luneta'' (lunette) because of its crescent shape.

West of Bagumbayan Field was the Paseo de la Luneta (Plaza of the Lunette) named after the fortification, not because of the shape of the plaza which was a long rectangle ended by two semicircles. It was also named Paseo de Alfonso XII (Plaza of Alfonso XII), after Alfonso XII, King of Spain during his reign from 1874 to 1885. Paseo de la Luneta was the center of social activity for the people of Manila in the early evening hours. This plaza was arranged with paths and lawns and surrounded by a wide driveway called "La Calzada" (The Road) where carriages circulate.

Execution of Gómez, Burgos and Zamora

During the Spanish period from 1823 to 1897 most especially in the latter part, the place became notorious for public executions. A total of 158 political enemies of Spain were executed in the park. On February 17, 1872, three Filipino priests, Mariano Gomez, José Burgos, and Jacinto Zamora, collectively known as Gomburza, were executed by garrote, accused of subversion arising from the 1872 Cavite mutiny.

The bronze-and-granite Rizal monument is among the most famous sculptural landmarks in the country. It is almost protocol for visiting dignitaries to lay a wreath at the monument. Located on the monument is not merely the statue of Rizal, but also his remains. On September 28, 1901, the United States Philippine Commission approved Act No. 243, which would erect a monument in Luneta to commemorate the memory of José Rizal, Filipino patriot, writer and poet. The committee formed by the act held an international design competition between 1905 and 1907 and invited sculptors from Europe and the United States to submit entries with an estimated cost of ₱100,000 using local materials. The first-prize winner was Carlos Nicoli of Carrara, Italy for his scaled plaster model titled ''"Al Martir de Bagumbayan"'' (To the Martyr of Bagumbayan) besting 40 other accepted entries. The contract though, was awarded to second-placer Swiss sculptor named Richard Kissling for his ''"Motto Stella"'' (Guiding Star). After more than twelve years of its approval, the shrine was finally unveiled on December 30, 1913 during Rizal's 17th death anniversary. His poem ''Mi último adiós'' ("My Last Farewell") is inscribed on the memorial plaque. The site is continuously guarded by ceremonial soldiers of Philippine Marine Corps’ Marine Security and Escort Group

In 1902, William Taft commissioned Daniel Burnham, architect and city planner, to do the city plan of Manila. Government buildings will have Neo-classical edifices with Greco-Roman columns. Burnham chose Luneta as the location of the new government center. A large Capitol building, which was envisioned to be the Philippine version of the Washington Capitol, was to become its core. It was to be surrounded by other government buildings, but only two of those buildings were built around Agrifina Circle, facing each other. They are the Department of Agriculture (now the National Museum of Anthropology) and the Department of Finance (It became the department of Tourism and is now the National Museum of Natural History). These two buildings were completed before the Second World War. The park was also intended to become a Philippine version of The Mall in Washington, D.C., with the planned building of the government offices.

In August 1954, President Ramon Magsaysay created the Jose Rizal National Centennial Commission to organize and manage the celebrations for the centennial of José Rizal's birth. Its plans include building a grand monument of José Rizal and the Rizal Memorial Cultural Center that would contain a national theater, a national museum, and a national library at the Luneta. The site was declared a national park on December 19, 1955 by virtue of Proclamation No. 234 signed by President Magsaysay. The Luneta National Park spans an area of approximately covering the area surrounding the Rizal Monument. The Commission of Parks and Wildlife (now Biodiversity Management Bureau) managed the site upon its establishment as a protected area. In 1957, President Carlos P. Garcia issued Proclamation No. 470 transferring the administration of the national park to the Jose Rizal National Centennial Commission. In 1961, in commemoration of Rizal's birth centennial, the National Library was inaugurated at the park. Its management was then handed over to the National Parks Development Committee, an attached agency of the Department of Tourism, created in 1963 by President Diosdado Macapagal. In 1967, the Luneta National Park was renamed to Rizal Park with the signing of Proclamation No. 299 by President Ferdinand Marcos.

On June 12, 1998, the park hosted many festivities which capped the 1998 Philippine Centennial, the event commemorating a hundred years since the Declaration of Independence from Spain and the establishment of the First Philippine Republic. The celebrations were led by then President Fidel V. Ramos.

Rizal Park was renovated by the National Parks Development Committee in 2011. The German-Filipino William Schaare, who built the old musical dancing fountain at the pool in the 1960s, handled its restoration. Among the other things that were restored were the Flower Clock (now known as the World-Class Filipino Bloom), the ''Noli Me Tangere'' Garden and the Luzviminda Boardwalk, which were opened just in time for the 150th birthday celebration of Jose Rizal.

In November 2019, ''La Madre Filipina'' was transferred back to its original site in Jones Bridge after 73 years of staying at the Park. Its plinth were reconstructed using the original neoclassic design during the 2019 redevelopment of the bridge. Due to the COVID-19 pandemic, Rizal Park was temporarily closed to the public. Rizal Park partially reopened on July 1, 2020, for jogging and exercise activities only.

In 2019, House Bill No. 2594 was introduced by Buhay Party-List Congressman Lito Atienza, a former Mayor of Manila, seeking the return of ownership and management of the park from the NPDC to the City Government of Manila. The transfer of administration, management, maintenance and operation of the Park including all of its activities, facilities and improvements thereafter, in pursue of Republic Act No. 7160, also known as the Local Government Code of 1991, which encouraged the transfer of power and authority from the National Government to Local Government Units (LGU), in line with the government's devolution program as mandated by the Constitution. The park is also dependent of the services the city renders. National parks which were now administered by LGUs include the Hundred Islands National Park (ownership transferred to Alaminos, Pangasinan in 2005) and the Quezon Memorial Circle (ownership transferred to Quezon City in 2008).

*February 18, 1981. The Beatification Mass of Saint Lorenzo Ruiz and Companions it is considered the first beatification ceremony ever heald outside the Vatican in Church history during the Apostolic visit of Pope John Paul II. *Various mass protests were held during 1986 as opposition to the government of Ferdinand Marcos. This culminated into the People Power Revolution. * January 15, 1995. The closing Mass of the 10th World Youth Day 1995 was held here attended by more than 10 million people. This is the record gathering of the Roman Catholic Church. *June 12, 1998. The Philippine Centennial Celebrations featured a Grand Centennial Parade culminating in a fireworks display emanating from ships in Manila Bay that was the most expensive ever produced in the country at the time. Rizal Park had over five million celebrating the one hundredth anniversary of the Philippine Declaration of Independence. *December 31, 1999 – January 1, 2000. The turn-of-the-century celebration was held here attended by more than 500,000 people. *November 27, 2005. Rizal Park was the venue of the opening ceremony for the 2005 Southeast Asian Games at the Quirino Grandstand. It was held at an open-air park instead of a stadium, a historic first for a Southeast Asian games' opening ceremony. It was again used on December 5, 2005 for the games' closing ceremony. *August 23, 2010. The park was the site of the 11-hour hostage crisis where a Hong Thai Travel Services tour group on a coach was hijacked by Rolando Mendoza, causing 9 casualties (including Mendoza) and 9 injuries. *August 22–26, 2013. The Million People March was held in the park, and other different locations, to protest against the improper use of Priority Development Assistance Fund. *January 18, 2015. The concluding mass of the Papal visit of Pope Francis was held here attended by more than 6 million people, making it the largest papal gathering in history.

* Monthly Flag-Raising Ceremony held every first Monday of the month at the Independence Flagpole for public – started October 2019. * The annual Independence Day (June 12), Rizal Day (December 30) and New Year's Eve (December 31) celebrations are held at the park. * The park was the traditional end of the Marlboro Tour (now known as the Tour de Filipinas), the national road bicycle racing event every April or May. Recently, the tour has ended in Baguio. * The park is also the host of the National Milo Marathon. * The parade of floats for the Metro Manila Film Festival is annually held every Christmas. Recently, the cities and towns in Metro Manila have begun rotating the hosting of the parade. * Presidential inaugurations are usually held in the park every June 30, six years starting from 1992.

The park is divided into three sections: Northeastern Section: This section is designated as the National Museum Complex which includes the Agrifina Circle, and where the National Museum of Natural History and the National Museum of Anthropology are located. Central Section: Located south of Maria Orosa Street is the park proper that extends down up to Roxas Boulevard. This is where the Rizal Monument and several attractions such as the Open-Air Auditorium, Independence Flagpole, Central Musical and Dancing Fountain are located. Southwestern Section: Includes the Burnham Green, a open field, the Quirino Grandstand and the Manila Ocean Park along Manila Bay. 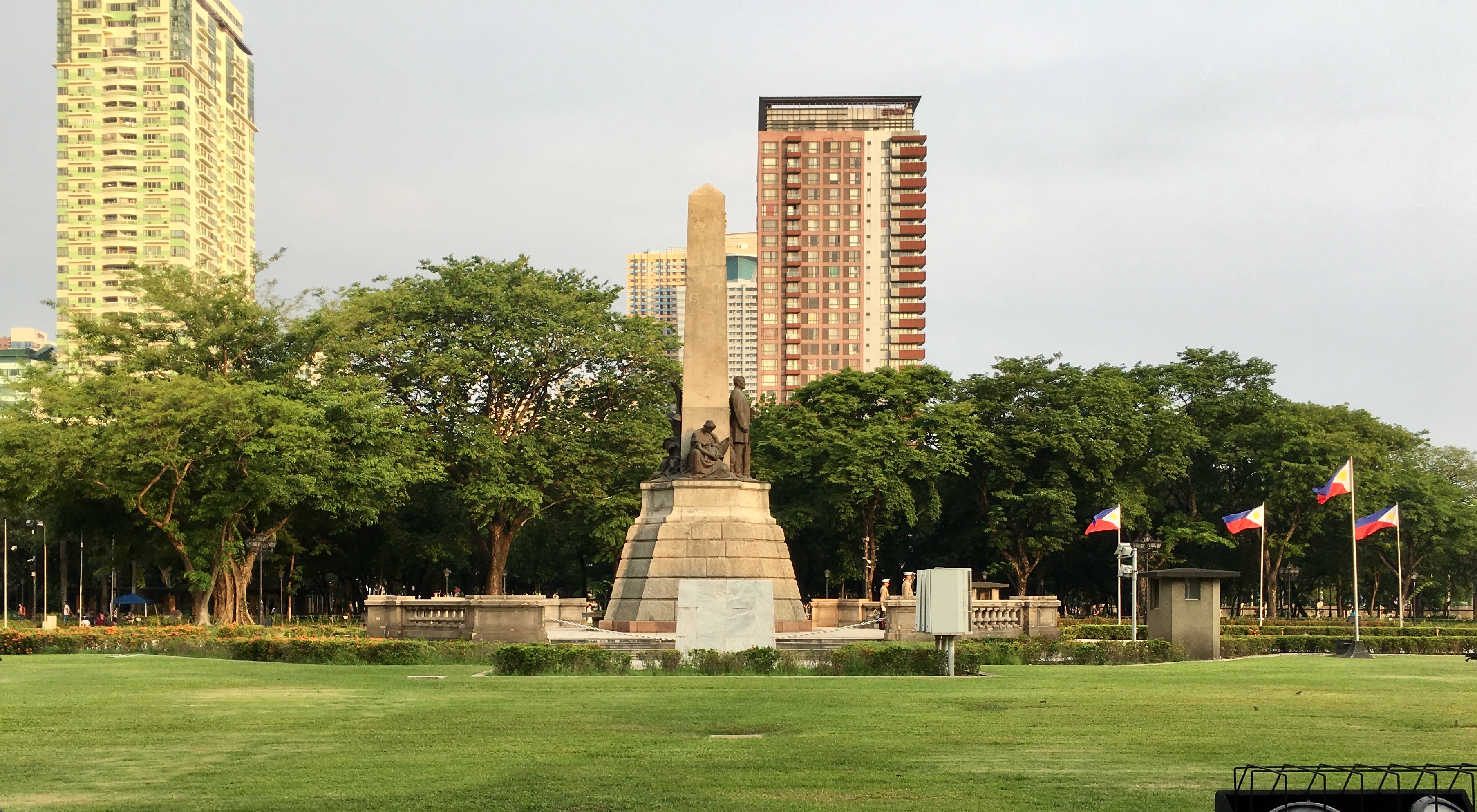 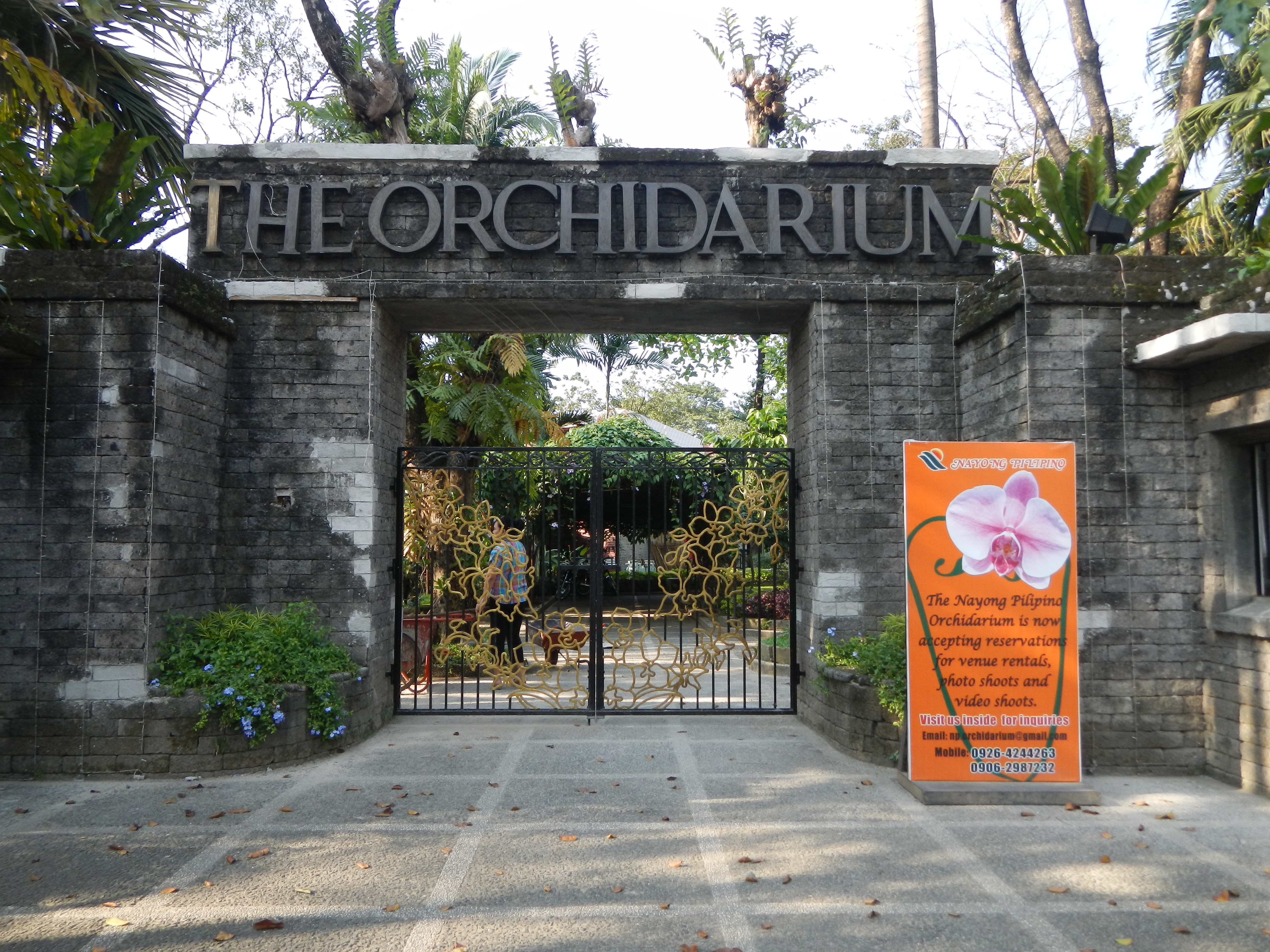 *Children's Playground, the section of the park built for kids, is located at the southeastern corner of the Rizal Park. The playground was also renovated in 2011.