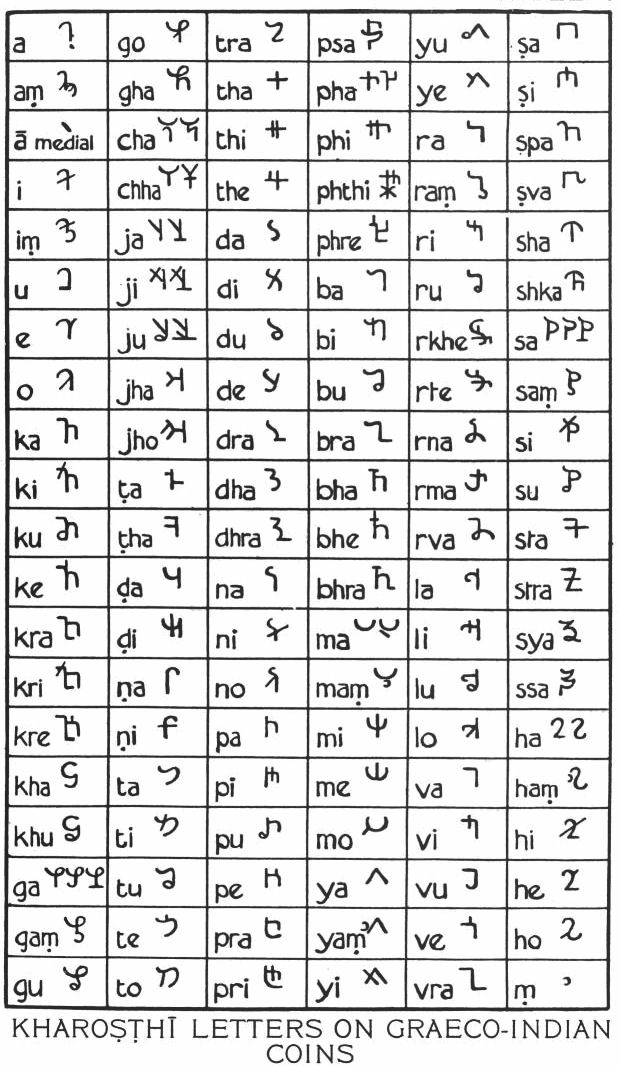 The Kharosthi script, also spelled Kharoshthi or Kharoṣṭhī (Kharosthi: 𐨑𐨪𐨆𐨯𐨠𐨁) was an ancient Indian script used in Gandhara (now Pakistan and north-eastern Afghanistan) to write Gandhari Prakrit and Sanskrit. It was used in Central Asia as well. An abugida, it was introduced at least by the middle of the 3rd century BCE, possibly during the 4th century BCE, and remained in use until it died out in its homeland around the 3rd century CE. It was also in use in Bactria, the Kushan Empire, Sogdia, and along the Silk Road. There is some evidence it may have survived until the 7th century in Khotan and Niya, both cities in Xinjiang.

Kharosthi (𐨑𐨪𐨆𐨮𐨿𐨛𐨁𐨌, from right to left ''Kha-ro-ṣṭhī'') is mostly written right to left (type A), but some inscriptions (type B) already show the left to right direction that was to become universal for the later South Asian scripts. Each syllable includes the short /a/ sound by default, with other vowels being indicated by diacritic marks. Recent epigraphic evidence has shown that the order of letters in the Kharosthi script follows what has become known as the Arapacana alphabet. As preserved in Sanskrit documents, the alphabet runs: :''a ra pa ca na la da ba ḍa ṣa va ta ya ṣṭa ka sa ma ga stha ja śva dha śa kha kṣa sta jñā rtha (''or'' ha) bha cha sma hva tsa gha ṭha ṇa pha ska ysa śca ṭa ḍha'' Some variations in both the number and order of syllables occur in extant texts. Kharosthi includes only one standalone vowel which is used for initial vowels in words. Other initial vowels use the a character modified by diacritics. Using epigraphic evidence, Salomon has established that the vowel order is /a e i o u/, akin to Semitic scripts, rather than the usual vowel order for Indic scripts /a i u e o/. Also, there is no differentiation between long and short vowels in Kharosthi. Both are marked using the same vowel markers. The alphabet was used in Gandharan Buddhism as a mnemonic for remembering a series of verses on the nature of phenomena. In Tantric Buddhism, the list was incorporated into ritual practices and later became enshrined in mantras.

There are two special modified forms of these consonants:

Various additional marks are used to modify vowels and consonants:

Kharosthi included a set of numerals that are reminiscent of Roman numerals. The system is based on an additive and a multiplicative principle, but does not have the subtractive feature used in the Roman numeral system. The numerals, like the letters, are written from right to left. There is no zero and no separate signs for the digits 5–9. Numbers in Kharosthi use an additive system. For example, the number 1996 would be written as 1000 4 4 1 100 20 20 20 20 10 4 2 (image: text: ). 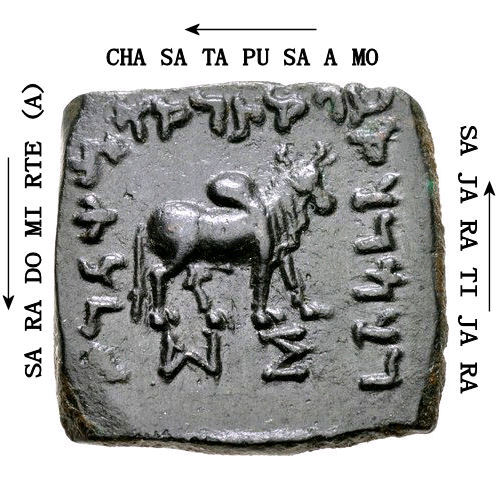 Scholars are not in agreement as to whether the Kharosthi script evolved gradually, or was the deliberate work of a single inventor. An analysis of the script forms shows a clear dependency on the Aramaic alphabet but with extensive modifications to support the sounds found in Indic languages. Kharosthi seems to be derived from a form of Aramaic used in administrative work during the reign of Darius the Great, rather than the monumental cuneiform used for public inscriptions.