Joseph Henry Garagiola Sr. (February 12, 1926 – March 23, 2016) was an American professional baseball catcher, later an announcer and television host, popular for his colorful personality. Garagiola played nine seasons in Major League Baseball (MLB) for the St. Louis Cardinals, Pittsburgh Pirates, Chicago Cubs, and New York Giants. He was later well known outside baseball for having been one of the regular panelists on ''The Today Show'' for many years and for his numerous appearances on game shows as a host and panelist.

Born in St. Louis, Missouri, Garagiola grew up on Elizabeth Avenue in an Italian-American neighborhood in the south part of the city known as The Hill, just across the street from Yogi Berra, his childhood friend and competitor (1925–2015), who was nine months older. In the early 1940s when Garagiola and Berra were teenagers, almost all pro baseball scouts rated Garagiola as the better prospect, but it was Berra who went on to a Hall of Fame career, while Garagiola was a journeyman. About growing up living across from Berra, Garagiola often quipped, "Not only was I not the best catcher in the Major Leagues, I wasn't even the best catcher on my street!" 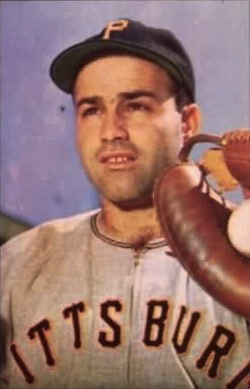 Garagiola was signed at age 16 by the St. Louis Cardinals organization. At age 17, he remains the youngest player to play in Columbus Red Birds history. Garagiola advanced to Columbus of the Class AA American Association in 1943, and was with them when he was called into military service on April 24, 1944. After taking basic training at Jefferson Barracks, Missouri, Garagiola was sent to Fort Riley, Kansas, where he quickly established himself as the catcher for the Fort Riley Centaurs, with teammates Rex Barney and Pete Reiser. Garagiola was sent to the Philippines in 1945, where he played ball for Kirby Higbe's Manila Dodgers. He was discharged from service in early 1946, and he was just 20 years old when he joined the Cardinals. Garagiola made his major league debut in . As a rookie in 1946, in his only World Series appearance, Garagiola batted 6-for-19 in five games, including a Game 4 where he went 4-for-5 with three RBIs. By contrast, Ted Williams went only 5-for-25 in the same series, which was Williams' only World Series appearance. On September 11, 1947, Joe Garagiola and Jackie Robinson were involved in an incident at home plate. Garagiola allegedly stepped on Robinson's foot and the two argued. Umpire Beans Reardon held back Garagiola while Robinson clapped. The incident was later part of a children's book titled ''In the Year of the Boar and Jackie Robinson''. Garagiola never quite lived up to the promise of his youth, appearing in only 676 games over nine seasons for four National League teams. He was a mediocre (though certainly good for a catcher) hitter in the majors, which featured in his self-deprecating humor. He once told this story himself: "He knew that it was time to retire when he was catching, and his ex-teammate Stan Musial stepped into the batter's box, turned to Joe, and said, ''"When are you gonna quit?"''" Looking back at his career in 1970, Garagiola observed, "It's not a record, but being traded four times when there are only eight teams in the league tells you something. I thought I was modeling uniforms for the National League."

After his retirement from baseball, Garagiola lent his name to a 1960 book ''Baseball Is a Funny Game'', which sold well upon release and helped establish Garagiola as a "personality." The book—largely ghostwritten—was a collection of humorous anecdotes surrounding his upbringing and his playing career, and showcased the folksy, humorous style that became his trademark as a broadcaster. Garagiola also wrote ''It's Anybody's Ballgame'' (1988) and ''Just Play Ball'' (2007).

Garagiola turned to broadcasting following his retirement as a player, first calling Cardinals radio broadcasts on KMOX from to . As an announcer, Garagiola was best known for his almost 30-year association with NBC television. He began doing national baseball broadcasts for the network in (teaming with Bob Wolff). Additionally, Garagiola called several World Series on NBC Radio in the 1960s, teaming with a number of announcers including By Saam and George Kell. After a stint doing New York Yankees games from 1965 to 1967, which saw him call Mickey Mantle's 500th home run, Garagiola returned to broadcasting NBC baseball, initially as the host of the pre-game show ''The Baseball World of Joe Garagiola'', and then as a play-by-play announcer beginning in 1974. Garagiola alternated play-by-play duties with Curt Gowdy on NBC until 1976, when he assumed the role full-time. He teamed with color commentator Tony Kubek from 1976 to 1982; in 1983, he shifted to color commentary as Vin Scully joined the network as lead play-by-play announcer. (Kubek joined Bob Costas to form NBC's #2 baseball announcing duo in this era.) Besides working on the ''Saturday Game of the Week'' for NBC, the team of Scully and Garagiola called three All-Star Games (1983, 1985, and 1987), three National League Championship Series (1983, 1985, and 1987), and three World Series (1984, 1986, and 1988). After calling a final World Series with Scully in 1988, Garagiola resigned from the network His slot on NBC's baseball broadcasts would be subsequently filled by Tom Seaver. After leaving NBC Sports, Garagiola spent one season (1990) as a cable-television commentator for the California Angels. From 1998 to 2012, he performed part-time color commentary duties for the Arizona Diamondbacks, where his son Joe Jr. was general manager. Garagiola officially announced his retirement from broadcasting

Besides calling baseball games for NBC, Garagiola served as a co-host on ''Today'' from 1967 to 1973 and again from 1990 to 1992. He also occasionally guest-hosted ''The Tonight Show Starring Johnny Carson'', including the only live appearances of any members of The Beatles on the program while still a group (John Lennon and Paul McCartney were the guests in May 1968). In the late 1960s and 1970s, Garagiola also hosted the game shows ''He Said, She Said''; ''Joe Garagiola's Memory Game''; ''Sale of the Century''; and ''To Tell the Truth'', as well as the short-lived ''Strike It Rich''. Garagiola was a guest celebrity panelist on ''Match Game'' in the late 1970s. He hosted the St. Louis area professional wrestling show, titled ''Wrestling at the Chase'' for three years from 1959–1962 (his brother, Mickey, was the wrestling show's ring announcer), and was a regular host of the Orange Bowl Parade in Miami on New Year's Eve. Garagiola later gained a new form of fame as co-host of the Westminster Kennel Club Dog Show for USA Network from 1994 to 2002. From 1969 to 1970, Garagiola was the Saturday afternoon host of the program ''Monitor''. (A link to a sample of his hosting is found below.) During the 1960s, he also contributed commentaries to ''Monitor'' for several years and had a daily five-minute morning drivetime sports commentary program on the network. From 1977 to 1983, his name was attached to the PGA Tour's Tucson Open tournament, broadcast by NBC. One of Garagiola's first appearances on TV was in 1960 when he appeared onstage at a campaign event for John F. Kennedy. Surrounded by important politicians, including former President Harry S. Truman, Garagiola put his arm around the former president and, knowing that his father who had often questioned his son's career choices would be watching the event on television, looked into the camera and said, "Hey Pop, I just want you to see who I'm hanging around with."

In the 1976 presidential election, Garagiola enthusiastically supported the candidacy of President Gerald Ford. During the fall campaign, the Republican National Committee hired Garagiola to do a series of television ads with Ford; the ads consisted of Garagiola talking to Ford in a relaxed, informal setting. Derided by Ford's critics as "The Joe and Jerry Show", the ads in their opinion were considered to have negatively affected the Ford campaign. The two men became close friends and on election night in November 1976, Ford invited Garagiola to be one of his guests at the White House to watch the results on television. Ford lost to Democrat Jimmy Carter, the former governor of Georgia.

Garagiola was an advocate against the use of chewing tobacco. He had picked up the habit during his playing days with the Cardinals, but quit cold turkey in the late-1950s. He annually visited major league teams during spring training with players from his generation who have suffered from oral cancer related to the addiction.

Garagiola was the keynote luncheon speaker at the 2007 convention of the Society for American Baseball Research held in St. Louis.

Garagiola was inducted into the Missouri Sports Hall of Fame in 1970. He was presented with a Peabody Award in 1973 for his NBC work. In , he was honored by the Baseball Hall of Fame with the Ford C. Frick Award for outstanding broadcasting accomplishments. He was inducted into the National Sportscasters and Sportswriters Association Hall of Fame in 2004. He has also been given his own star on the St. Louis Walk of Fame. The St. Louis Wrestling Hall of Fame inducted him in 2008 for his ''Wrestling at the Chase'' broadcasts. In 2012, he was honored by the Catholic Community Foundation of the Diocese of Phoenix, receiving its inaugural Legacy Award at its 24th Annual Crosier Gala for his tireless help and generosity with the St. Peter's Mission School on the Gila River Reservation. (The American Sportscasters Association also honored him for his work with the St. Peter's Mission School with its Humanitarian Award in 1995.) On December 4, 2013, Garagiola was named as the recipient of the Buck O'Neil Lifetime Achievement Award, presented once every three years by the Baseball Hall of Fame for positive contributions to Major League Baseball. The Hall's official announcement specifically cited his advocacy against smokeless tobacco, as well as his role as a founder of the Baseball Assistance Team, a charity that provides grants to needy members of the professional baseball community. In the 2013 film ''42'', Garagiola was portrayed by actor Gino Anthony Pesi.

Garagiola married Audrie Ross, the organist at the Cardinals' ballpark in St. Louis, in 1949; their two sons later had an association with baseball. Joe Jr., was the general manager for the Arizona Diamondbacks, and later senior vice president of baseball operations for Major League Baseball. His other son Steve is a broadcast journalist as well, serving as a reporter and anchor for WDIV-TV, the NBC affiliate in Detroit. His daughter, Gina, has also worked in TV news, as a field reporter for Phoenix television station KTVK, and is now a freelance writer. Garagiola Sr. had eight grandchildren.

Garagiola died at age 90 March 23, 2016, in Scottsdale, Arizona. The Diamondbacks wore a patch in his memory on their right sleeve for the 2016 season, a black circle with "JOE" written in white in the center, with a catchers' mask replacing the O. Garagiola's funeral mass was held on April 13 in St. Louis at St. Ambrose Catholic Church, the same church where he was baptized. He was interred at Resurrection Cemetery in St. Louis.