Click Here for Items Related To - Islamic insurgency in the Philippines 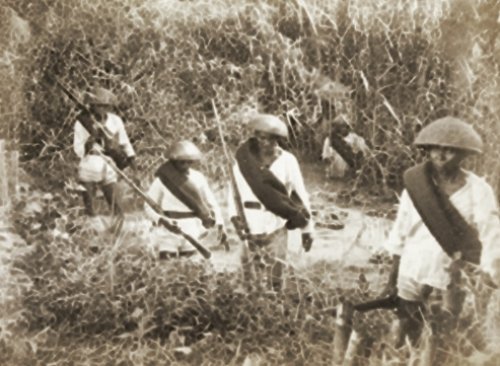 The Moro people have had a history of resistance against foreign rule for more than 400 years. During the Spanish–Moro conflict, Spain repeatedly tried to conquer the Moro Sultanate of Sulu, Sultanate of Maguindanao, and the Confederation of sultanates in Lanao. The armed struggle against the Spanish, Americans, Japanese, and Christian Filipinos is considered by current Moro Muslim leaders to be part of a four-century-long "national liberation movement" of the Bangsamoro (Moro Nation). The foundations of the modern conflict can be traced to the Spanish and American wars against the Moros. Following the Spanish–American War in 1898, another conflict sparked in the southern Philippines between the revolutionary Muslims in the Philippines and the United States military that took place between 1899 and 1913. On August 14, 1898, after defeating Spanish forces, the United States claimed the Philippines as its territory under the Treaty of Paris of 1898, establishing a military government under General Wesley Merritt as Military Governor. Filipinos immediately opposed foreign rule by the United States. American forces took control from the Spanish government in Jolo on May 18, 1899, and at Zamboanga in December 1899. Brigadier General John C. Bates was sent to negotiate a treaty with the Sultan of Sulu, Jamalul Kiram II. Kiram was disappointed by the American takeover, as he expected to regain sovereignty after the defeat of Spanish forces in the archipelago. Bates' main goal was to guarantee Moro neutrality in the Philippine–American War, and to establish order in the southern Philippines. After some negotiation, the Bates Treaty was signed, which was based on an earlier Spanish treaty. The Bates Treaty did ensure the neutrality of the Muslims in the south, but it was actually set up to buy time for the Americans until the war in the north ended. On March 20, 1900, Bates was replaced by Brigadier General William August Kobbé and the District of Mindanao-Jolo was upgraded to a full department. American forces in Mindanao were reinforced and hostilities with the Moro people lessened, although there are accounts of Americans and other civilians being attacked and slain by Moros. The American invasion began in 1904 and ended at the term of Major General John J. Pershing, the third and final military governor of Moro Province, although major resistance continued in Mount Bagsak and Bud Dajo in Jolo; in the latter, the United States military killed hundreds of Moro in the Moro Crater massacre. After the war, in 1915, the Americans imposed the Carpenter Treaty on Sulu. Repeated rebellions by the Moros against American rule continued to break out even after the main Moro Rebellion ended, right up to the Japanese occupation of the Philippines during World War II. During the Japanese invasion, the Moros waged an insurgency against the Japanese on Mindanao and Sulu until Japan surrendered in 1945. Moro Juramentados attacked the Spanish, Americans, Philippine Constabulary, and the Japanese.

The American colonial government and subsequently the Philippine government pursued a policy of intra-ethnic migration by resettling significant numbers of Christian Filipino settlers from the Visayas and Luzon onto tracts of land in Mindanao, beginning in the 1920s. This policy allowed Christian Filipinos to outnumber both the Moro and Lumad populations by the 1970s, which was a contributing factor in aggravating grievances between the Moro and Filipino Christian settlers as disputes over land increased. Another grievance by the Moro people is the extraction of Mindanao's natural resources by the central government whilst many Moros continued to live in poverty. Moro Muslims and Lumads were largely supplanted during the Spanish and American colonization programs, with Christian Filipino settlers eventually taking control of key areas along newly built roads and disrupting traditional Moro administrative structures and control over resources. The Americans preferred Christians to become administrators of newly defined townships instead of Lumad and Moro, with environmental degradation resulting from unsustainable population growth (due to the influx of settler migrants) and timber logging.

Under President Ferdinand Marcos, it was alleged that at least 11 Filipino Muslim military trainees were killed in Corregidor by soldiers of the Armed Forces of the Philippines. The trainees were believed to be a part of an upcoming rebellion. By then, University of the Philippines professor Nur Misuari had formed the Moro National Liberation Front (MNLF) to condemn the alleged killings of the 11 Muslims and to seek the establishment of a Bangsamoro nation through the force of arms. In 1969, the MNLF was established and commenced an armed struggle against the Philippine government. During one of the fiercest battles of the insurgency in 1974, Jolo was extensively damaged and news of the tragedy galvanized other Muslims around the world to pay greater attention to the conflict. Many civilians were supposedly killed when the Armed Forces razed much of Jolo municipality to the ground in a scorched-earth tactic. On September 24, 1974, the Philippine Army killed at least 1,000 Moro civilians who were praying in a mosque in what is known as the Malisbong massacre. Two years later, the Philippine government and the MNLF signed the Tripoli Agreement, declaring a ceasefire on both sides. The agreement provided that Mindanao would remain a part of the Philippines, but that 13 of its provinces would be governed by an autonomous government for the Bangsamoro people. President Marcos later reneged on the agreement, and violence ensued. The Philippine government allegedly encouraged Christian settlers in Mindanao to form a militia called the Ilaga to fight the Moros. The Ilaga engaged in killings and human rights abuses and were responsible for the Manili massacre of 65 Moro Muslim civilians in a mosque in June 1971, including women and children. The Ilaga allegedly also engaged in cannibalism, cutting off the body parts of their victims to eat in rituals. In 1978, Sheikh Salamat Hashim established the Moro Islamic Liberation Front (MILF), a splinter group of the MNLF seeking to establish an Islamic state. Conflicts between these rebel groups and the Armed Forces of the Philippines continued until the end of President Marcos' regime.

Earlier in her term, President Corazon Aquino arranged a meeting with MNLF chairman Nur Misuari and several MNLF rebel groups in Sulu, which paved the way for a series of negotiations. In 1989, the Autonomous Region in Muslim Mindanao (ARMM) was created under Republic Act No. 6734 or the ARMM Organic Act, pursuant to the 1987 Constitution. In 1991, Abdurajak Janjalani, a former teacher who had studied Islam in the Middle East, formed the Abu Sayyaf Group after reportedly meeting Osama bin Laden in Afghanistan in the 1980s. Janjalani recruited former members of the MNLF for the more radical and theocratic Abu Sayyaf. Under the Presidency of Fidel V. Ramos, several negotiations and peace talks were held and the ARMM solidified and was to have its own geopolitical system.

On May 27, 2001, the Abu Sayyaf seized twenty hostages from an upscale resort in Palawan. Four of the hostages managed to escape. The kidnapping group composed of 40 gunmen then seized the Dr. Jose Torres Memorial Hospital and St. Peter's Church compound in the town of Lamitan in Basilan and claimed to have taken captive 200 people, although 20 people were confirmed to be taken captive inside the hospital, including the staff and the patients. There was a crossfire between the Philippine Army and Abu Sayyaf rebels in Lamitan following the hospital takeover which resulted in the deaths of 12 soldiers, including the army captain. Up to 22 soldiers were reportedly killed in an effort to rescue the hostages. Five more captives escaped during the battle at Lamitan. Two of the captives were killed prior to the siege in Lamitan, including one beheading. The Abu Sayyaf then conducted a series of raids, including one at a coconut plantation where the rebel groups hacked the heads of two men using bolo knives. The owners and a security guard were also held captive and the rebel groups burned down two buildings, including a chapel, a week after the battle in Lamitan. Another raid was conducted on August 2, 2001 on Barangay Balobo in Lamitan, Basilan. After three days, the Philippine Army rescued numerous hostages after they overtook the hideout of the militants, where 11 bodies were found beheaded. Other hostages were either released or had escaped. On June 13, 2001, the number of hostages was calculated at around 28, as three more people were found beheaded in Basilan, including Guillermo Sobero. They were beheaded since the Philippine Army would not halt the rescue operation. The Burnhams were still in the group of 14 still held captive, according to three hostages who escaped in October 2001. On June 7, 2002, after a year of the hostages being held captive, a rescue mission was conducted resulting in the deaths of Martin Burnham and a nurse named Ediborah Yap after they were caught in the crossfire. Martin was killed by three gunshots to the chest while Gracia Burnham was wounded in her right leg. By this time Nur Misuari ordered his supporters to attack government targets to prevent the holding of elections on ARMM in November 2001, ushering his exit as the governor of the region. Misuari would be later arrested in 2007 in Malaysia and was deported back to the Philippines for trial. In July 2004, Gracia Burnham testified at a trial of eight Abu Sayyaf members, identifying six of the suspects as being her former captors, including Alhamzer Limbong, Abdul Azan Diamla, Abu Khari Moctar, Bas Ishmael, Alzen Jandul and Dazid Baize. Fourteen Abu Sayyaf members were sentenced to life imprisonment while four were acquitted. Alhamzer Limbong was later killed in a prison uprising. These rebel groups, especially the Abu Sayyaf, conducted several terror attacks, namely the bombings at Zamboanga in October 2002; the bombing of SuperFerry 14 in February 2004; the simultaneous bombings in Central Mindanao in October 2006; the beheadings of several Philippine Marines in July 2007; the Batasang Pambansa bombing in November 2007; and the 2009 bombings in Mindanao. One thousand MILF rebels under the command of Umbra Kato have seized control of thirty-five villages in the North Cotabato province. Two thousand Philippine troops with helicopters and artillery were sent into the seized area on August 9 to liberate it from the rebels. The MILF had wanted North Cotabato to be included in the Autonomous Region in Muslim Mindanao. The government and MILF had been negotiating for the inclusion of the province in the Muslim Autonomous Region but the Supreme Court had struck down the proposal after hearing concerns from local Christian leaders in the region. The rebel troops were ordered to leave the area by their commanders, but the contingents under Kato refused to leave the villages they had occupied and instead dug in. The Philippine Army responded on August 9 by bombarding them. The next day, the government forces moved to retake the villages, recapturing two of them from the rebels. Numerous clashes erupted between the Philippine Army and rebel groups, such as the clash on June 14, 2009 that killed 10 rebels. Between 2002 and 2015, the Philippines and the United States were part of a joint military campaign against Islamist terrorism known as Operation Enduring Freedom – Philippines. This was part of the War on Terror.

The MILF and MNLF have expressed their commitment to peace and in finally ending the 47-year-old insurgency while the offensive against Abu Sayyaf and other splinter groups have continued, with skirmishes in Jolo, Basilan and other parts of Mindanao. A bombing in Davao City in September 2016 killed 15 people. Elsewhere, on May 23, 2017, the Maute group attacked Marawi. President Rodrigo Duterte declared Proclamation No. 216, which placed the whole of Mindanao under a state of martial law and suspended the writ of habeas corpus. Clashes continued until October 2017 as the battle for Marawi City pitted Islamic militants against the Philippine government forces. Violence was severe. The government used heavy artillery and air strikes to shell Abu Sayyaf and Maute positions while the militant groups resorted to executing captured Christians. In 2018, two bombing incidents involving Abu Sayyaf and the BIFF occurred, one in Lamitan, Basilan and two separate incidents in Isulan, Sultan Kudarat.