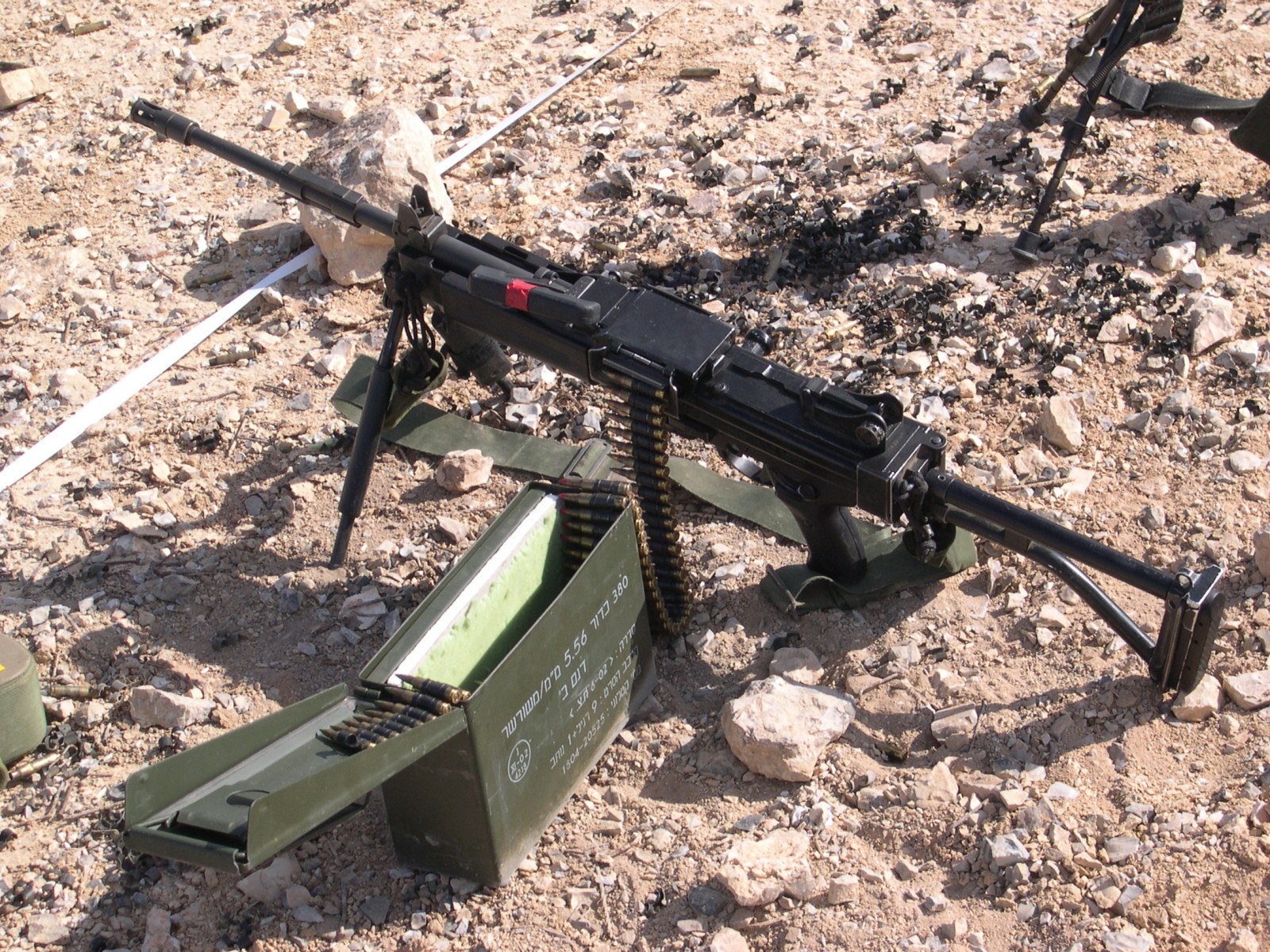 The Negev is a gas-operated selective fire light machine gun that uses propellant gases from the barrel to cycle a short-stroke gas piston operating system under the barrel and a rotary bolt locking mechanism. The bolt itself features 4 radial locking lugs that engage the barrel extension and its rotation is controlled by a pin on the bolt body, which rides inside a camming guide machined into the bolt carrier. The bolt contains a spring-powered casing extractor unit, while a lever ejector is housed inside the receiver (it is rotated by the recoiling bolt carrier). The design was meant to be reliable, especially in adverse conditions. In 1997, it was officially adopted by the Israeli Defense Forces (IDF).

The Negev is striker-fired, where the bolt carrier assembly acts as the striker, and fires from an open bolt position. A lever-type fire control selector switch is provided (“A”— for fully automatic fire and “R”— for semi-automatic fire), installed on the left side of the pistol grip, which doubles as a manual safety against accidental firing. The safe “S” position disables the sear mechanism (which makes it impossible to cock the bolt carrier), by lifting the lever responsible for holding the bolt carrier in the forward position and disconnects the trigger mechanism from the sear. The weapon can be secured safe regardless of the position of the bolt carrier group. The cocking handle is equipped with a ratcheting mechanism that immobilizes the partially cocked bolt carrier.

The Negev has a quick-change chrome-lined barrel that is manufactured using a cold hammer forging process. The barrel is fitted with a slotted flash suppressor and a fixed carry handle, which is used to transport the weapon and change-out an overheated barrel. The barrel can be changed only after lifting open the feed tray cover. During the weapon's initial development a barrel with a 1 in 305 mm (1:12 in) rifling twist rate was also planned, adapted for the lightweight M193 cartridge. Additionally, a multifunction muzzle device was designed, used to launch rifle grenades.

The Negev's iron sights (closed-type) consist of a front post (adjustable for both windage and elevation) and a rear aperture sight with an elevation adjustment drum, with 300 to 1,000 m range settings in 100 m increments. The sight line radius is . For night-time operation the weapon is equipped with gaseous tritium-illuminated vials (supplied by Betalight): one installed in the front sight post, and two—on a notch sight under the standard aperture sight arm (before use, the rear sight leaf is pivoted forward to expose the night notch sight). A rail is integrated into the receiver top cover that allows optical day and night-time sights to be mounted to the weapon. The barrel can also be optionally fitted with mounting hardware that would allow the Negev to mount a laser pointer or reflex sight. The machine gun has a metal side-folding (right side) stock and a removable bipod, installed to the forward end of the handguard and folded under the handguard when stowed. The receiver also has slots and hooks used to secure the weapon to vehicle mounting hardware.

The Negev uses the 5.56×45mm NATO intermediate cartridge and is optimized for the SS109 bullet. Field maintenance involves stripping the weapon down to six main groups: the barrel, stock, bolt carrier, bolt, bipod and return mechanism. All parts, including the quick-change barrels are fully interchangeable. The Negev NG-7 uses the 7.62×51mm NATO full-power battle rifle cartridge.

The Negev feeds from an M27 disintegrating, open-link ammunition belt, carried in a 150-round fabric container that clips into the magazine well, or alternatively from a 35-round box magazine from the Galil assault rifle, or a 30-round STANAG magazine from the M16 rifle (with the use of an adapter). 200-round ammunition belt containers are also available. Belted ammunition is introduced into the feed tray port from the left side, while the magazine is inserted vertically into the magazine well at the base of the receiver. The feed system uses a pawl feeding mechanism, driven by the recoiling bolt carrier, but the belt is moved only during the rearward movement of the bolt carrier. The non-reciprocating charging handle is located on the right side of the weapon.

* Negev NG-7 – is a general-purpose machine gun is chambered for the 7.62×51mm NATO cartridge. It has a barrel length of 508 mm (20 inch) and two operation modes; semi-automatic for accurate and fast controlled fire, and fully automatic for maximum firepower. It is fed by a 100- or 125-round assault drum magazine containing disintegrating M13 NATO standard ammunition belts or NATO standard ammunition belts and has two gas regulator settings as the possibly for box magazine feeding was omitted. The IWI eLog weapon-embedded sensor module was added to collect and store data on the actual use of the weapons for more efficient maintenance management and servicing by armourers. * Negev NG-7 SF – is a compact variant of the Negev NG-7. It uses a shorter barrel and is primarily fitted with a side grip (Negev assault grip). It has a barrel length of 420 mm (16.5 inch).

* *: Used by Battalion d'intervention rapide * * *: Used by mechanised infantry and paratroopers. * : Used by Presidential Guard units in 2010 * * * Since May 2010, standard issue light machine gun of the GAF. Heavily used by Georgian units in Afghanistan. *: 5.56 variant serving as standard issue LMG for Special Forces from earlier. An order for 16,479 NG-7s was placed in March 2020 to replace all the INSAS Light Machine guns present with the Indian Army, which were subsequently delivered in February 2021. *: The Negev was adopted by the Israel Defense Forces in 1997 and the Negev NG-7 was adopted in 2012. *: *: Kenya Defense Forces *: Mexican Federal Police *: Police Special Forces *: Paraguayan Army. *: Philippine National Police Philippine Coast Guard *: Used by special forces and commandos *: Used by Tanzanian Special Forces. *: Purchased 1,000 machine guns in 2007, and another 550 in 2008. *: In service with Naval Special Forces. *: Known as Fort-401