Click Here for Items Related To - Franz Joseph I of Austria

en|Francis Joseph Charles | mother = Princess Sophie of Bavaria | religion = Roman Catholicism | signature = Franz joseph signature.png Franz Joseph I or Francis Joseph I (german: Franz Josef Karl, hu|Ferenc József; 18 August 1830 – 21 November 1916) was Emperor of Austria, King of Hungary, Croatia, and Bohemia, and monarch of other states of the Austro-Hungarian Empire, from 2 December 1848 until his death. From 1 May 1850 to 24 August 1866 he was also President of the German Confederation. He was the longest-reigning ruler of Austria and Hungary, as well as the sixth-longest-reigning monarch of any country in history. In December 1848, Emperor Ferdinand abdicated the throne at Olomouc, as part of Minister President Felix zu Schwarzenberg's plan to end the Revolutions of 1848 in Hungary. This allowed Ferdinand's nephew Franz Joseph to accede to the throne. Largely considered to be a reactionary, Franz Joseph spent his early reign resisting constitutionalism in his domains. The Austrian Empire was forced to cede its influence over Tuscany and most of its claim to Lombardy–Venetia to the Kingdom of Piedmont-Sardinia, following the Second Italian War of Independence in 1859 and the Third Italian War of Independence in 1866. Although Franz Joseph ceded no territory to the Kingdom of Prussia after the Austrian defeat in the Austro-Prussian War, the Peace of Prague (23 August 1866) settled the German Question in favour of Prussia, which prevented the Unification of Germany from occurring under the House of Habsburg. Franz Joseph was troubled by nationalism during his entire reign. He concluded the Austro-Hungarian Compromise of 1867, which granted greater autonomy to Hungary and transformed the Austrian Empire into the Dual Monarchy of Austria-Hungary. He ruled peacefully for the next 45 years, but personally suffered the tragedies of the execution of his brother, the Emperor Maximilian of Mexico in 1867, the suicide of his only son and heir-apparent, Crown Prince Rudolf, in 1889, the assassination of his wife, Empress Elisabeth ("Sisi"), in 1898, and the assassination of his nephew and heir-presumptive, the Archduke Franz Ferdinand, in 1914. After the Austro-Prussian War, Austria-Hungary turned its attention to the Balkans, which was a hotspot of international tension because of conflicting interests with the Russian Empire. The Bosnian Crisis was a result of Franz Joseph's annexation of Bosnia and Herzegovina in 1908, which had been occupied by his troops since the Congress of Berlin (1878). On 28 June 1914, the assassination of his nephew and heir-presumptive, Archduke Franz Ferdinand, in Sarajevo resulted in Austria-Hungary's declaration of war against the Kingdom of Serbia, which was an ally of the Russian Empire. That activated a system of alliances which resulted in World War I. Franz Joseph died on 21 November 1916, after ruling his domains for almost 68 years as one of the longest-reigning monarchs in modern history. He was succeeded by his grandnephew Charles.

Franz Joseph was born 18 August 1830 in the Schönbrunn Palace in Vienna (on the 65th anniversary of the death of Francis of Lorraine) as the eldest son of Archduke Franz Karl (the younger son of Holy Roman Emperor Francis II), and his wife Princess Sophie of Bavaria. Because his uncle, reigning from 1835 as the Emperor Ferdinand, was weak-minded, and his father unambitious and retiring, the mother of the young Archduke "Franzl" brought him up as a future Emperor, with emphasis on devotion, responsibility and diligence. Since no descendants were to be expected from the marriage of the heir to the throne, Archduke Ferdinand (emperor from 1835), his next elder brother Franz Karl was to continue the succession of the Habsburgs, which is why the birth of his son Franz Joseph at the Viennese court was given special importance. Franz Karl was physically as well as mentally of weak constitution and was therefore hardly suitable for a reign. For this reason, Franz Joseph was consistently built up as a potential successor to the imperial throne by his politically ambitious mother from early childhood. Up to the age of seven, little "Franzi" was brought up in the care of the nanny ("Aja") Louise von Sturmfeder. Then the "state education" began, the central contents of which were "sense of duty", religiosity and dynastic awareness. The theologian Joseph Othmar von Rauscher conveyed to him the inviolable understanding of rulership of divine origin (divine grace), which is why no participation of the population in rulership in the form of parliaments is required. The educators Heinrich Franz von Bombelles and Colonel Johann Baptist Coronini-Cronberg ordered Archduke Franz to study an enormous amount of time, which initially comprised 18 hours per week and was expanded to 50 hours per week by the age of 16. One of the main focuses of the lessons was language acquisition: in addition to French, the diplomatic language of the time, Latin and ancient Greek, Hungarian, Czech, Italian and Polish were the most important national languages of the monarchy. In addition, the Archduke received general education that was customary at the time (including mathematics, physics, history, geography), which was later supplemented by law and political science. Various forms of physical education completed the extensive program. On the occasion of his 13th birthday, Franz was appointed Colonel of Dragoon Regiment No. 3 and the focus of training shifted to imparting basic strategic and tactical knowledge. Franzl came to idolise his grandfather, ''der Gute Kaiser Franz'', who had died shortly before the former's fifth birthday, as the ideal monarch. At the age of thirteen, Franzl started a career as a colonel in the Austrian army. From that point onward, army style dictated his personal fashion – for the rest of his life he normally wore the uniform of a military officer. Franz Joseph was soon joined by three younger brothers: Archduke Ferdinand Maximilian (born 1832, the future Emperor Maximilian of Mexico); Archduke Karl Ludwig (born 1833, father of Archduke Franz Ferdinand of Austria), and Archduke Ludwig Viktor (born 1842), and a sister, Maria Anna (born 1835), who died at the age of four.

During the Revolutions of 1848 the Austrian Chancellor Prince Metternich resigned (March–April 1848). The young Archduke, who (it was widely expected) would soon succeed his uncle on the throne, was appointed Governor of Bohemia on 6 April 1848, but never took up the post. Sent instead to the front in Italy, he joined Field Marshal Radetzky on campaign on 29 April, receiving his baptism of fire on 5 May at Santa Lucia. 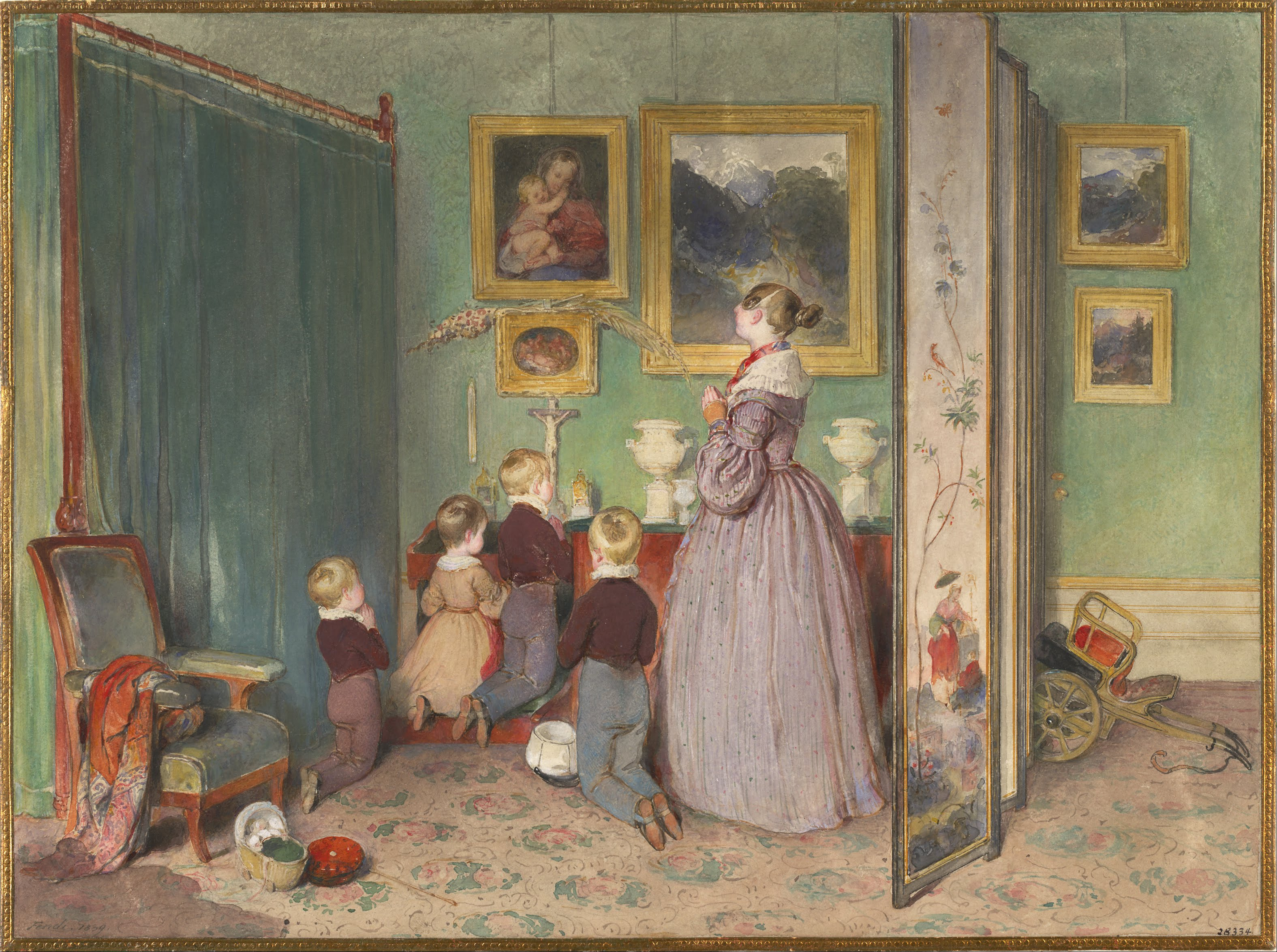 By all accounts he handled his first military experience calmly and with dignity. Around the same time, the Imperial Family was fleeing revolutionary Vienna for the calmer setting of Innsbruck, in Tyrol. Called back from Italy, the Archduke joined the rest of his family at Innsbruck by mid-June. At Innsbruck at this time Franz Joseph first met his cousin Elisabeth, his future bride, then a girl of ten, but apparently the meeting made little impression. Following Austria's victory over the Italians at Custoza in late July 1848, the court felt it safe to return to Vienna, and Franz Joseph travelled with them. But within a few weeks Vienna again appeared unsafe, and in September the court left once more, this time for Olomouc (Olmütz) in Moravia. By now, Prince Alfred I of Windisch-Grätz, an influential military commander in Bohemia, was determined to see the young Archduke soon put on the throne. It was thought that a new ruler would not be bound by the oaths to respect constitutional government to which Ferdinand had been forced to agree, and that it was necessary to find a young, energetic emperor to replace the kindly, but mentally unfit Ferdinand. By the abdication of his uncle Ferdinand and the renunciation of his father (the mild-mannered Franz Karl) Franz Joseph succeeded as Emperor of Austria at Olomouc on 2 December. At this time he first became known by his second as well as his first Christian name. The name "Franz Joseph" was chosen to bring back memories of the new Emperor's great-granduncle, Emperor Joseph II (Holy Roman Emperor from 1765 to 1790), remembered as a modernising reformer. Under the guidance of the new prime minister Prince Schwarzenberg the Third, the new emperor at first pursued a cautious course, granting a constitution in early 1849. At the same time, a military campaign was necessary against the Hungarians, who had rebelled against Habsburg central authority in the name of their ancient constitution. Franz Joseph was also almost immediately faced with a renewal of the fighting in Italy, with King Charles Albert of Sardinia taking advantage of setbacks in Hungary to resume the war in March 1849. 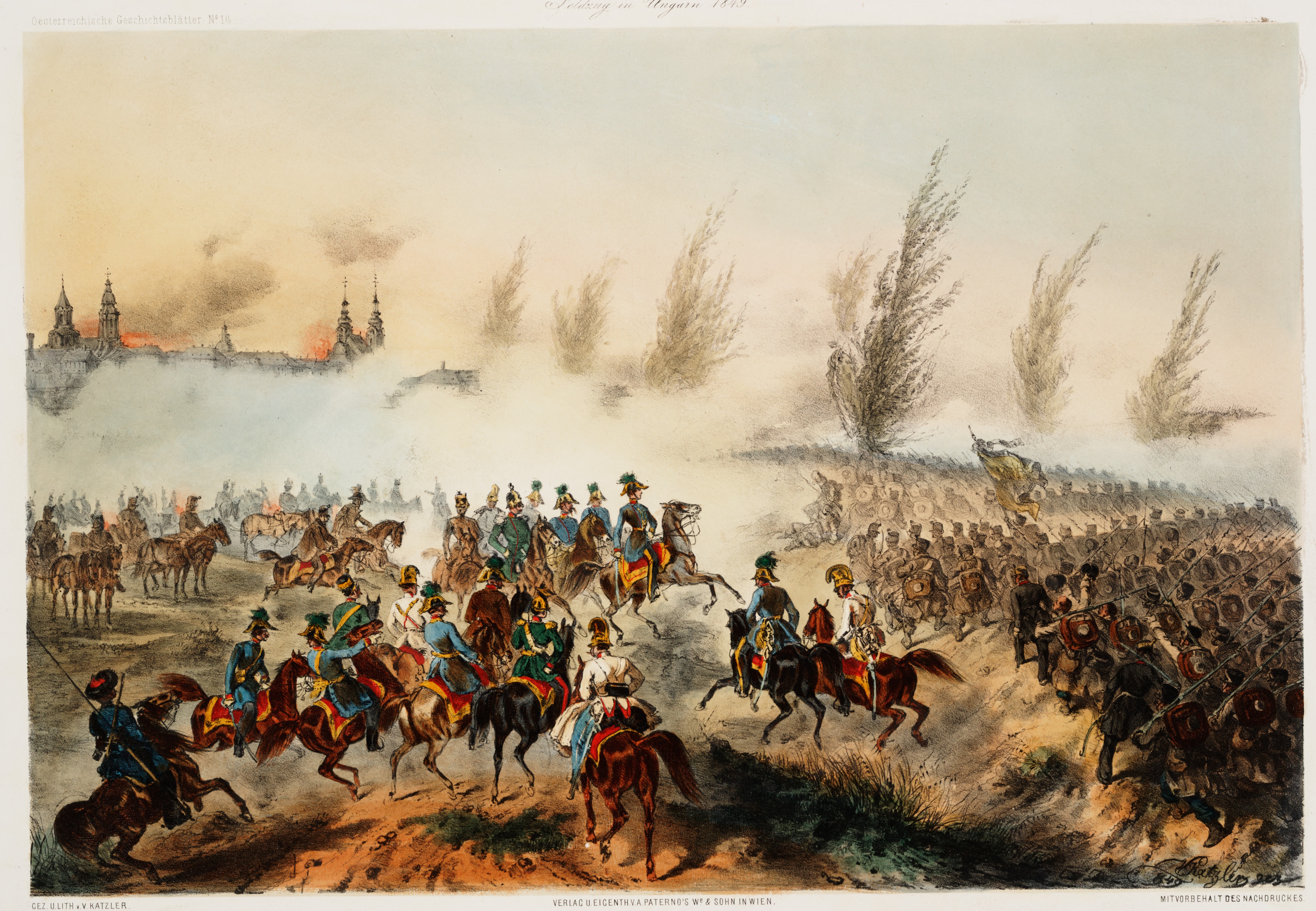 However, the military tide began to swiftly turn in favor of Franz Joseph and the Austrian whitecoats. Almost immediately, Charles Albert was decisively beaten by Radetzky at Novara and forced to sue for peace, as well as to renounce his throne.

The Hungarian reform laws (April laws) were based on the 12 points that established the fundaments of modern civil and political rights, economic and societal reforms in Kingdom of Hungary. The crucial turning point of the Hungarian events were the April laws which was ratified by his uncle King Ferdinand, however the new young Austrian monarch Francis Joseph arbitrarily "revoked" the laws without any legal competence. The monarchs had no right to revoke Hungarian parliamentary laws which were already signed. This unconstitutional act irreversibly escalated the conflict between the Hungarian parliament and Francis Joseph. The Austrian Stadion Constitution was accepted by the Imperial Diet of Austria, where Hungary had no representation, and which traditionally had no legislative power in the territory of Kingdom of Hungary; despite of this, it also tried to abolish the Diet of Hungary (which existed as the supreme legislative power in Hungary since the late 12th century.) The new Austrian constitution also went against the historical constitution of Hungary, and even tried to nullify it. These events represented a clear and obvious existential threat for the Hungarian state. The new constrained Stadion Constitution of Austria, the revoke of the April laws and the Austrian military campaign against Kingdom of Hungary resulted in the fall of the pacifist Batthyány government (which sought agreement with the court) and led to the sudden emergence of Lajos Kossuth's followers in the Hungarian parliament, who demanded the full independence of Hungary. On 7 March 1849 an imperial proclamation was issued in the name of the emperor Francis Joseph, according to the new proclamation, the territory of Kingdom of Hungary would be carved up and administered by five military districts, while Principality of Transylvania would be reestablished. The Austrian military intervention in the Kingdom of Hungary resulted in strong anti-Habsburg sentiment among Hungarians, thus the events in Hungary grew into a war for total independence from the Habsburg dynasty.

Constitutional and Legitimacy problems in Hungary

Unlike other Habsburg ruled areas, Kingdom of Hungary had an old historic constitution, which limited the power of the Crown and had greatly increased the authority of the parliament since the 13th century. On 7 December 1848, the Diet of Hungary formally refused to acknowledge the title of the new king, "as without the knowledge and consent of the diet no one could sit on the Hungarian throne" and called the nation to arms.