Easton is a town in Bristol County, Massachusetts, United States. The population was 23,112 at the 2010 census. It is part of the Greater Boston area. Easton is governed by an elected Select Board. Open Town Meeting acts as the legislative branch of the town. The Select Board chooses a Town Administrator to run the day-to-day operations of the town.

Easton was first settled in 1694 and was officially incorporated in 1725. In 1694, the first settler, Clement Briggs, established his home near the Easton Green. In 1711, the Taunton North Purchase area became Norton, and in 1713, the sixty-nine families settled in Easton and hired Elder William Pratt as their first minister. Prior to the settlers' establishment, the area was occupied by Native Americans as a hunting area and a burial ground. During King Philip's War, Metacom, also known as King Philip, used part of Easton as a headquarters for his troops. There was no legal parish in Easton until 1722, when the East Precinct of Norton was recognized. In 1725, the area was incorporated as the Town of Easton; it was so named because it was formerly called the "East End" of the Taunton North Purchase and was shortened by pronunciation to Easton. During the Revolutionary War, General George Washington stayed at the Benjamin Williams Tavern on Bay Road, which is now the second oldest existing house in Easton, while on his way to negotiate for cannonballs at the old Perry Foundry in Taunton. In 1803, the Ames Shovel Works was established and became nationally known as having provided the shovels which laid the Union Pacific Railroad and opened the west. In 1875, the shovel production of the Ames plant was worth $1.5 million. The most notable of the Ames family were Oakes Ames, a key figure in the Crédit Mobilier of America scandal, and Oliver Ames(R), governor of Massachusetts from 1887–1890. The Ames family shaped the town's economy, and was responsible for the presence of a number of landmark buildings in the town designed by H. H. Richardson, originator of the Richardsonian Romanesque style and designer of Trinity Church in Boston. Richardson buildings in Easton include: *The Ames Free Library (town library) *Oakes Ames Memorial Hall *The Old Colony Railroad Station (houses the Easton Historical Society) *The Ames Gate Lodge (privately owned by the Ames family) *The F. L. Ames Gardener's Cottage (privately owned by the Ames family) Though this school complex was not made by Richardson himself, it was dedicated to him and made in his style: *H.H.Richardson/F.L.Olmsted Intermediate School In addition, there is a commercial building at 69 Main Street which designed and build in the nineteenth century by Richardson's office in a Richardsonian style. The Richardson buildings are all located within a compact area designated as the H. H. Richardson Historic District. The area also includes The Rockery, designed by Frederick Law Olmsted, who also landscaped grounds of Oakes Ames Memorial Hall and the Ames Free Library. Within a few blocks of the H. H. Richardson Historic District is Unity Church, built by the Ames family in 1875, and designed in the Gothic Revival Style by architect and publisher John Ames Mitchell. It includes an ornate oak frieze including sculptures of twenty-two angels playing music, carved by Johannes Kirchmayer (1860–1930), and two notable stained-glass windows, "Angel of Help," and "Figure of Wisdom," both by John LaFarge (1835–1910). "Figure of Wisdom," completed in 1901, is the largest stained-glass work created by LaFarge. 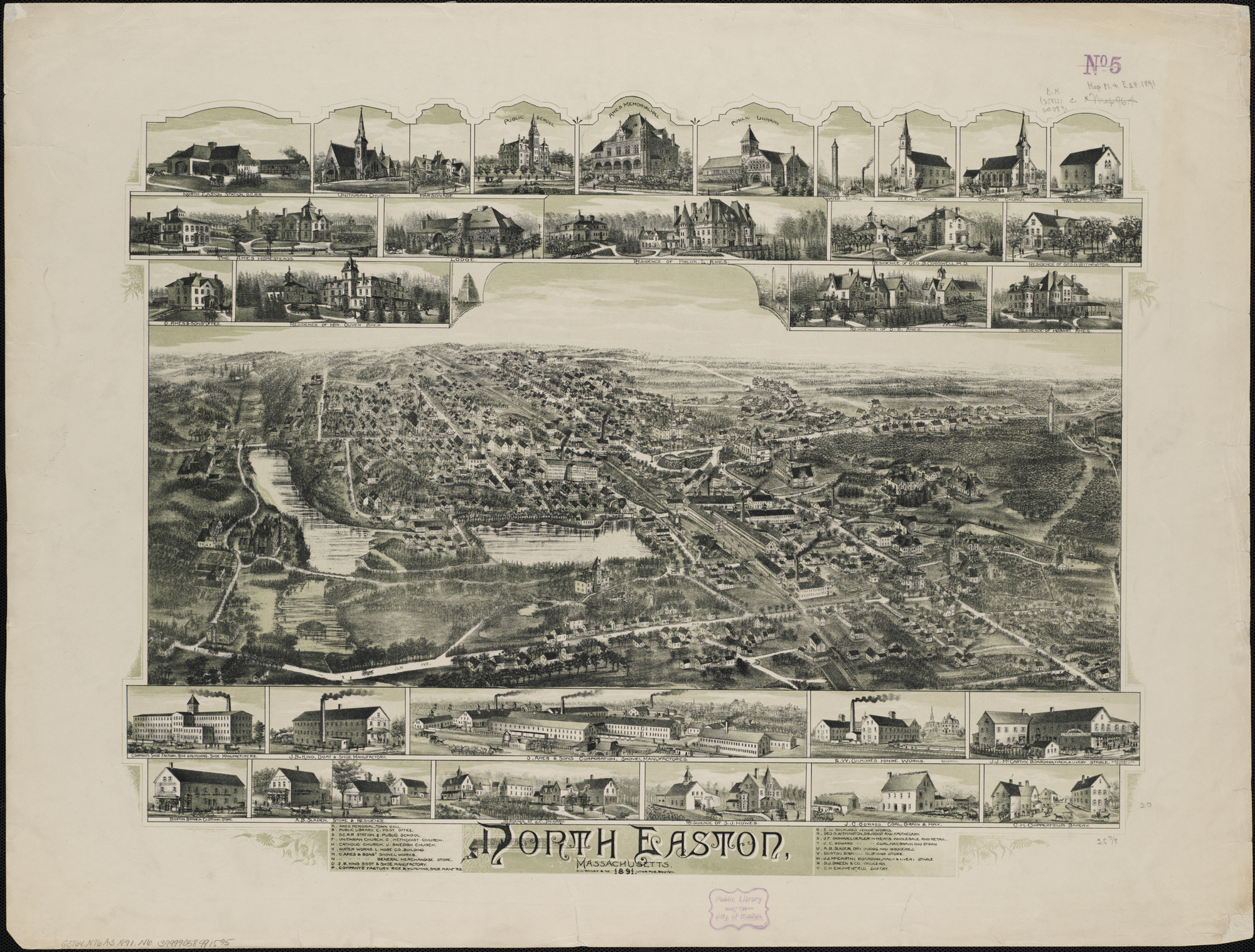 According to the United States Census Bureau, the town has a total area of , of which is land and (2.54%) is water. The town, in addition to its own smaller town forest, includes part of Borderland State Park at the northwest corner of town, Hockomock Swamp Wildlife Management Area at the southeast corner of town, and all of Wheaton Farm Conservation Area in the southwest. All of the town's waterways are considered part of the Taunton River Watershed area, which in turn is the eastern section of the Narragansett Bay Watershed area. Easton forms the northeastern corner of Bristol County, where the county intersects with Plymouth County to the east and Norfolk County to the north. The localities of Easton include Alger's Corner, Daley Corner, Easton Center, Easton Green, Eastondale, Five Corners, Furnace Village, Goward's Corner, Morris Corner, Morse Corner, Pratt's Corner. Although there is no official designation dividing "North Easton" from "South Easton," the terms are colloquially used by older residents of the town even though they have no governmental or legal standing. Easton is located in eastern Massachusetts. The roughly trapezoidal-shaped town is bordered by Brockton and West Bridgewater to the east, Taunton and Raynham to the south, Norton to either side of its southwest corner, Mansfield to the west, and Sharon and Stoughton to the north.

Easton is served by the following highways that run through the town: Routes 106, 123 and 138. Additionally, the town is served by two major highways which run just outside its border, Route 24 to the east and Interstate 495 to the south. Easton receives limited bus service from the Brockton Area Transit Authority, with Route 9 making stops adjacent to Stonehill College and the Easton Industrial Park. Bloom Bus Lines also offers commuter bus service to Taunton and Boston, with a flag stop at the corner of Route 138 and Route 106. Easton is the site of two proposed commuter rail stations, North Easton and Easton Village, on the Stoughton Branch option of the MBTA's South Coast Rail project. In March 2011, following the release of the U.S. Army Corps of Engineers' Draft Environmental Impact Report, Gov. Deval Patrick's administration and the MBTA announced this alternative as the best option for achieving all the goals of the project. As of 2019, the Easton stations have been moved to Phase 2 of the project, which will not be completed until 2030.

Easton is governed by an elected committee of select board members and a town administrator. Easton's "Board of Selectmen" was renamed a Select Board via Town Meeting in 2019. The Easton Select Board: *Dottie Fulginiti (Chair) *Craig Barger (Vice-Chair) *Marc Lamb *Thomas Brussard *Charles King The Easton Town Administrator: * Connor Read

Easton does not have a daily newspaper, but is served by the ''Brockton Enterprise'', a GateHouse Media company. Easton's last town-specific newspaper, a weekly called the ''Easton Journal'', published its final issue in 2019, combining with three other local weekly newspapers to create a regional weekly called the ''Journal News Independent'' (also owned by GateHouse Media)''.'' Easton Community Access Television serves as the public access station for the town, with many town board meetings and school events televised on the channel. Because of Easton's proximity to both Boston and Providence, town residents have access to television networks in both media markets.