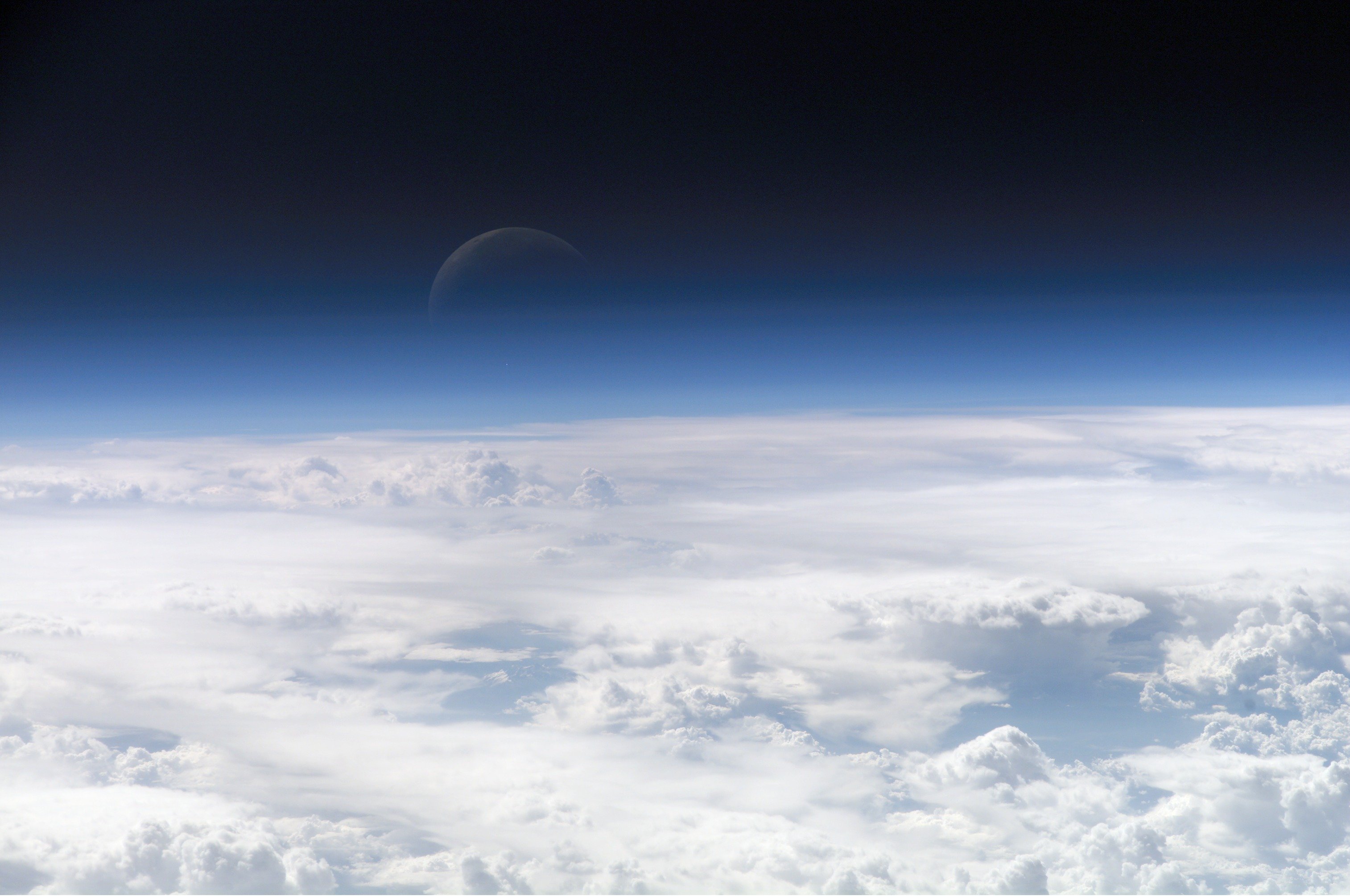 The three major constituents of Earth's atmosphere are
nitrogen Nitrogen is the chemical element with the Symbol (chemistry), symbol N and atomic number 7. Nitrogen is a nonmetal and the lightest member of pnictogen, group 15 of the periodic table, often called the pnictogens. It is a common element in the ...
,
oxygen Oxygen is the chemical element with the chemical symbol, symbol O and atomic number 8. It is a member of the chalcogen Group (periodic table), group in the periodic table, a highly Chemical reaction, reactive nonmetal, and an oxidizing a ...
, and
argon Argon is a chemical element with the Symbol (chemistry), symbol Ar and atomic number 18. It is in group 18 of the periodic table and is a noble gas. Argon is the third-most abundant gas in Earth's atmosphere, at 0.934% (9340 Parts-per notatio ...
. Water vapor accounts for roughly 0.25% of the atmosphere by mass. The concentration of water vapor (a greenhouse gas) varies significantly from around 10 ppm by mole fraction in the coldest portions of the atmosphere to as much as 5% by mole fraction in hot, humid air masses, and concentrations of other atmospheric gases are typically quoted in terms of dry air (without water vapor). The remaining gases are often referred to as trace gases, among which are other
greenhouse gas A greenhouse gas (GHG or GhG) is a gas that Absorption (electromagnetic radiation), absorbs and Emission (electromagnetic radiation), emits radiant energy within the thermal infrared range, causing the greenhouse effect. The primary greenhouse ...
es, principally carbon dioxide, methane, nitrous oxide, and ozone. Besides argon, already mentioned, other
noble gas The noble gases (historically also the inert gases; sometimes referred to as aerogens) make up a class of chemical elements with similar properties; under Standard conditions for temperature and pressure, standard conditions, they are all odorle ...
es, neon, helium, krypton, and xenon are also present. Filtered air includes trace amounts of many other
chemical compound A chemical compound is a chemical substance composed of many identical molecules (or molecular entity, molecular entities) containing atoms from more than one chemical element held together by chemical bonds. A homonuclear molecule, molecule co ...
s. Many substances of natural origin may be present in locally and seasonally variable small amounts as
aerosol An aerosol is a suspension (chemistry), suspension of fine solid particles or liquid Drop (liquid), droplets in air or another gas. Aerosols can be natural or Human impact on the environment, anthropogenic. Examples of natural aerosols are fog o ...
s in an unfiltered air sample, including
dust Dust is made of fine particles of solid matter. On Earth, it generally consists of particles in the atmosphere that come from various sources such as soil lifted by wind (an aeolian process), volcanic eruptions, and pollution. Dust in ho ...
of mineral and organic composition,
pollen Pollen is a powdery substance produced by Spermatophyte, seed plants. It consists of pollen grains (highly reduced microgametophytes), which produce male gametes (sperm cells). Pollen grains have a hard coat made of sporopollenin that protects ...
and spores, sea spray, and volcanic ash. Various industrial
pollutant A pollutant or novel entity is a substance or energy introduced into the environment that has undesired effects, or adversely affects the usefulness of a resource. These can be both naturally forming (i.e. minerals or extracted compounds like Ex ...
s also may be present as gases or aerosols, such as
chlorine Chlorine is a chemical element with the Symbol (chemistry), symbol Cl and atomic number 17. The second-lightest of the halogens, it appears between fluorine and bromine in the periodic table and its properties are mostly intermediate betwee ...
(elemental or in compounds),
fluorine Fluorine is a chemical element A chemical element is a species of atoms that have a given number of protons in their atomic nucleus, nuclei, including the pure Chemical substance, substance consisting only of that species. Unlike chemical c ...
compounds and elemental mercury vapor. Sulfur compounds such as
hydrogen sulfide Hydrogen sulfide is a chemical compound with the chemical formula, formula . It is a colorless Chalcogen hydride, chalcogen-hydride gas, and is poisonous, corrosive, and flammable, with trace amounts in ambient atmosphere having a characteristic ...
and
sulfur dioxide Sulfur dioxide ( IUPAC-recommended spelling) or sulphur dioxide (traditional Commonwealth English) is the chemical compound with the formula . It is a toxic gas responsible for the odor of burnt matches. It is released naturally by volcani ...
(SO2) may be derived from natural sources or from industrial air pollution. The average
molecular weight A molecule is a group of two or more atoms held together by attractive forces known as chemical bonds; depending on context, the term may or may not include ions which satisfy this criterion. In quantum physics, organic chemistry, and bioche ...
of dry air, which can be used to calculate densities or to convert between mole fraction and mass fraction, is about 28.946 or 28.96 g/mol. This is decreased when the air is humid. The relative concentration of gases remains constant until about .

The exosphere is the outermost layer of Earth's atmosphere (i.e. the upper limit of the atmosphere). It extends from the thermopause, at the top of the thermosphere at an altitude of about 700 km above sea level, to about 10,000 km (6,200 mi; 33,000,000 ft), where it merges into the solar wind. This layer is mainly composed of extremely low densities of hydrogen, helium and several heavier molecules including nitrogen, oxygen and carbon dioxide closer to the exobase. The atoms and molecules are so far apart that they can travel hundreds of kilometers without colliding with one another. Thus, the exosphere no longer behaves like a gas, and the particles constantly escape into space. These free-moving particles follow ballistic trajectories and may migrate in and out of the magnetosphere or the solar wind. The exosphere is too far above Earth for meteorological phenomena to be possible. However, Earth's auroras—the aurora borealis (northern lights) and aurora australis (southern lights)—sometimes occur in the lower part of the exosphere, where they overlap into the thermosphere. The exosphere contains many of the artificial satellites that
orbit In celestial mechanics, an orbit is the curved trajectory of an physical body, object such as the trajectory of a planet around a star, or of a natural satellite around a planet, or of an satellite, artificial satellite around an object or pos ...
Earth.

The thermosphere is the second-highest layer of Earth's atmosphere. It extends from the mesopause (which separates it from the mesosphere) at an altitude of about up to the thermopause at an altitude range of . The height of the thermopause varies considerably due to changes in solar activity. Because the thermopause lies at the lower boundary of the exosphere, it is also referred to as the exobase. The lower part of the thermosphere, from above Earth's surface, contains the ionosphere. The temperature of the thermosphere gradually increases with height and can rise as high as , though the gas molecules are so far apart that its temperature in the usual sense is not very meaningful. The air is so rarefied that an individual molecule (of
oxygen Oxygen is the chemical element with the chemical symbol, symbol O and atomic number 8. It is a member of the chalcogen Group (periodic table), group in the periodic table, a highly Chemical reaction, reactive nonmetal, and an oxidizing a ...
, for example) travels an average of between collisions with other molecules. Although the thermosphere has a high proportion of molecules with high energy, it would not feel hot to a human in direct contact, because its density is too low to conduct a significant amount of energy to or from the skin. This layer is completely cloudless and free of water vapor. However, non-hydrometeorological phenomena such as the aurora borealis and aurora australis are occasionally seen in the thermosphere. The
International Space Station The International Space Station (ISS) is the largest Modular design, modular space station currently in low Earth orbit. It is a multinational collaborative project involving five participating space agencies: NASA (United States), Roscosmos ( ...
orbits in this layer, between . It is this layer where many of the satellites orbiting the earth are present.

The mesosphere is the third highest layer of Earth's atmosphere, occupying the region above the stratosphere and below the thermosphere. It extends from the stratopause at an altitude of about to the mesopause at above sea level. Temperatures drop with increasing altitude to the mesopause that marks the top of this middle layer of the atmosphere. It is the coldest place on Earth and has an average temperature around . Just below the mesopause, the air is so cold that even the very scarce water vapor at this altitude can sublimate into polar-mesospheric noctilucent clouds of ice particles. These are the highest clouds in the atmosphere and may be visible to the naked eye if sunlight reflects off them about an hour or two after sunset or similarly before sunrise. They are most readily visible when the Sun is around 4 to 16 degrees below the horizon. Lightning-induced discharges known as transient luminous events (TLEs) occasionally form in the mesosphere above tropospheric thunderclouds. The mesosphere is also the layer where most
meteor A meteoroid () is a small rocky or metallic body in outer space. Meteoroids are defined as objects significantly smaller than asteroids, ranging in size from grains to objects up to a meter wide. Objects smaller than this are classified as micr ...
s burn up upon atmospheric entrance. It is too high above Earth to be accessible to jet-powered aircraft and balloons, and too low to permit orbital spacecraft. The mesosphere is mainly accessed by sounding rockets and rocket-powered aircraft.

The troposphere is the lowest layer of Earth's atmosphere. It extends from Earth's surface to an average height of about , although this
altitude Altitude or height (also sometimes known as depth) is a distance measurement, usually in the vertical or "up" direction, between a reference datum and a point or object. The exact definition and reference datum varies according to the context ...
varies from about at the geographic poles to at the
Equator The equator is a circle of latitude, about in circumference, that divides Earth into the Northern Hemisphere, Northern and Southern Hemisphere, Southern hemispheres. It is an imaginary line located at 0 degrees latitude, halfway between the ...
,